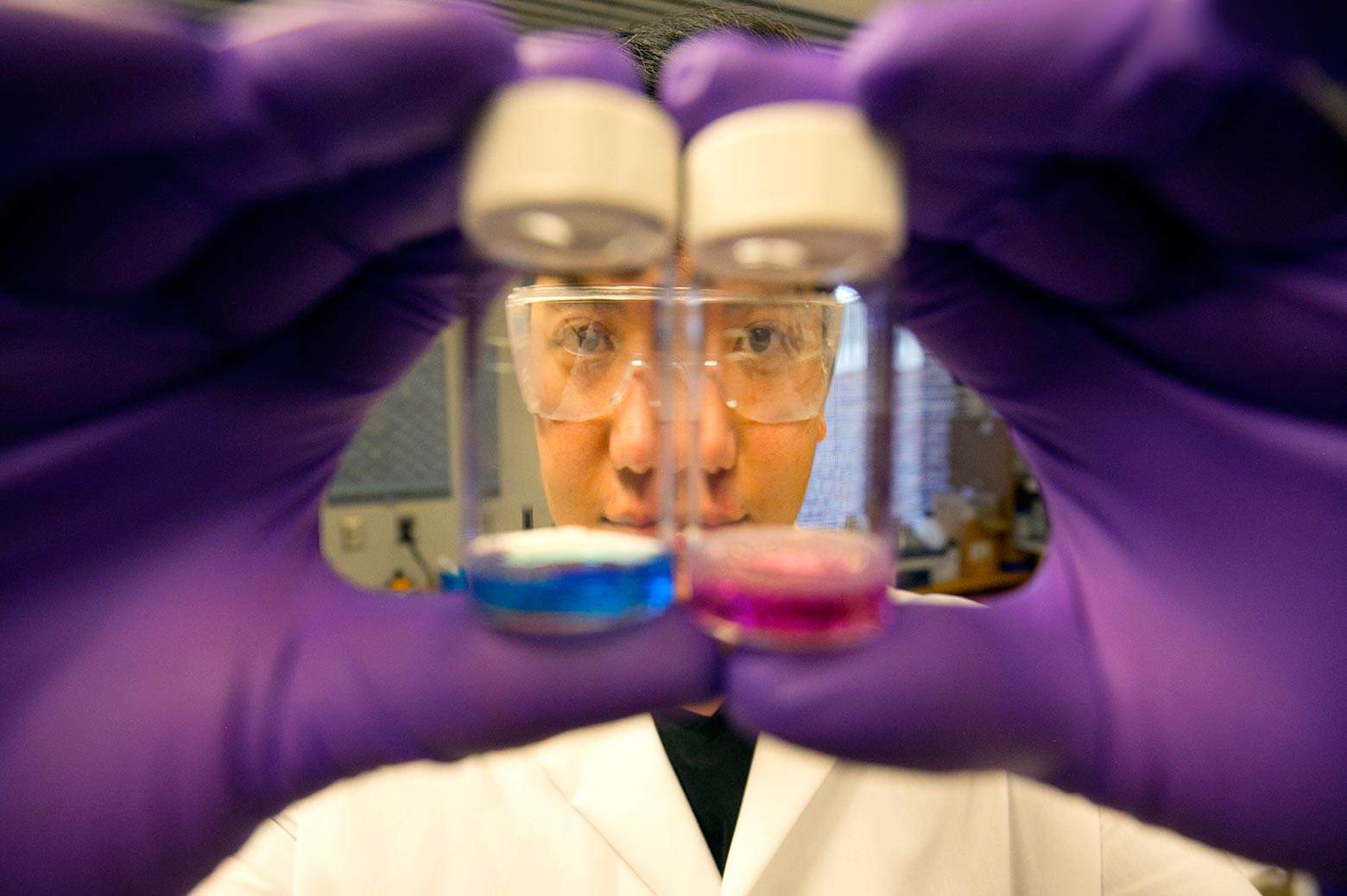 A tumor’s chemical makeup holds valuable clues about how to fight it. But today, it’s difficult or impossible to examine the chemistry inside a tumor. A nanoparticle-assisted optical imaging technique could one day enable doctors to read those clues in real time, providing a non-invasive precision medicine approach that could match treatment to individual tumors.

“Tumors vary widely from one patient to the next, so the more we know about them, the more effective our treatments become. This is especially important with chemotherapy because of its high cost and severe side effects,” said Xueding Wang, a University of Michigan professor of biomedical engineering who helped develop the technique. “This could form the basis of precision medicine treatments that offer better outcomes, fewer side effects and lower costs.”

Most of us are working in the dark with regard to tumor imaging.
Tweet

Doctors already know, for example, that some treatments don’t work on acidic tumors while others are ineffective against tumors that have low oxygen levels. If they know the chemical makeup of a given tumor, they can start the right treatment immediately, then keep close tabs on its effectiveness over time.

In a recent paper, U-M researchers successfully used the process to get a three-dimensional view of the pH level inside tumors in mice, and they believe that they will also be able to use it to read a variety of other important chemical markers inside cancers. The new technology is detailed in a paper published September 7 in Nature Communication. 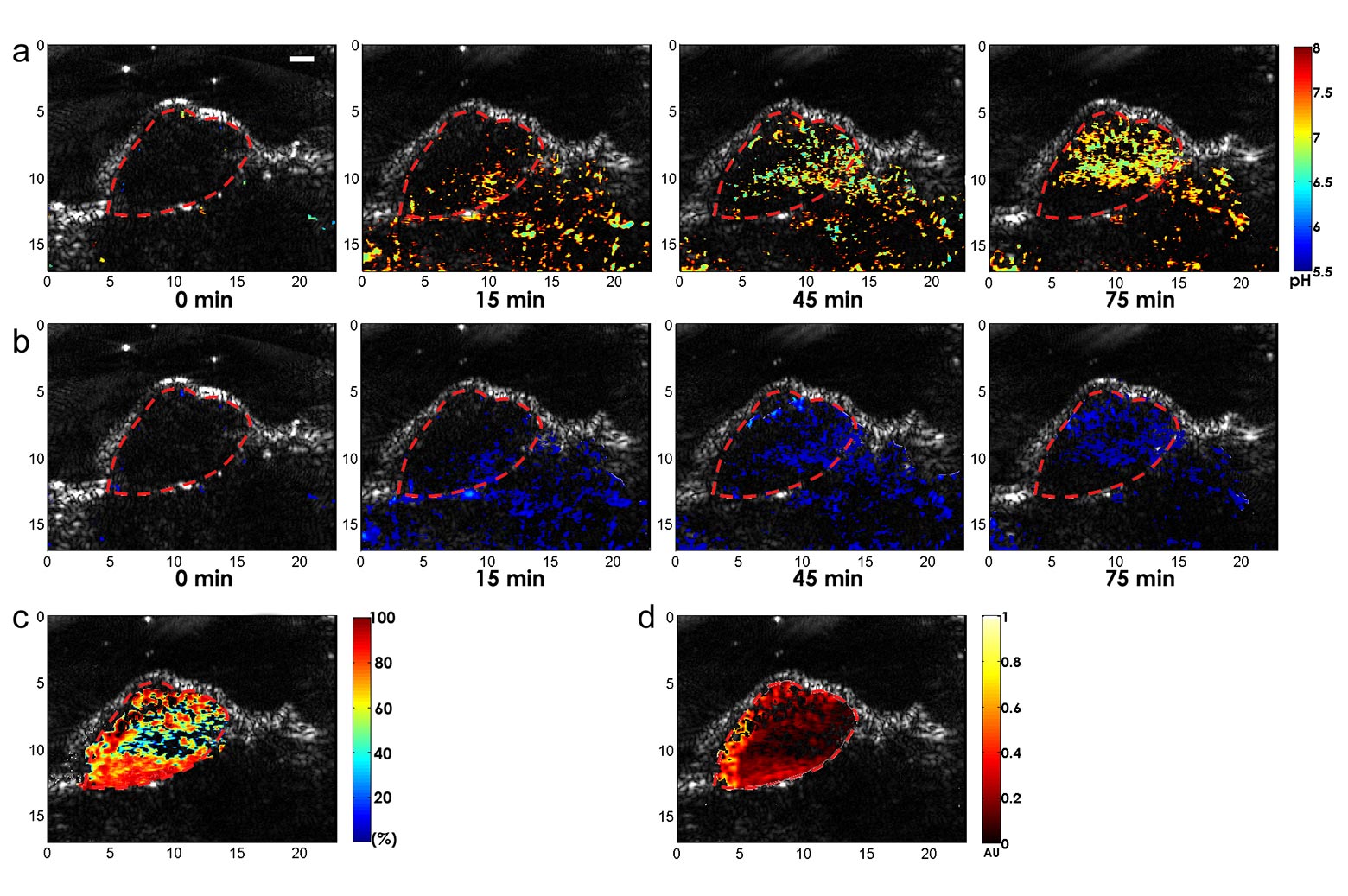 IMAGE:  Images of a mouse tumor obtained with the new technique. Row A shows the presence of the nanoparticle itself, in blue. Row B shows the pH of the tumor. Image C shows oxygen saturation and image D shows hemoglobin concentration. Photo courtesy of Janggun Jo, Michigan Engineering

“Most of us are working in the dark with regard to tumor imaging. There are very few cases where we can study the chemistry of a tumor,” said Wang. ”We hope to change that with this technology, which offers a spatially detailed, real-time look at the chemistry inside a tumor, even when it’s deep inside the body.”

The technique uses a two-part system, starting with a purpose-built, injectable nanoparticle that’s absorbed only by cancerous cells. The particles were loaded with a marker dye that changes color in response to the tumor’s pH to measure acidity.

Wang and Raoul Kopelman, the Richard Smalley Distinguished University Professor of Chemistry, Physics and Applied Physics, made the nanoparticles small enough to fit through tiny cracks in the walls of cancer cells called fenestrations—imperfections that form because cancer cells grow so quickly. They then coated the particles with protein fragments, or peptides, that are attracted to cancerous cells. 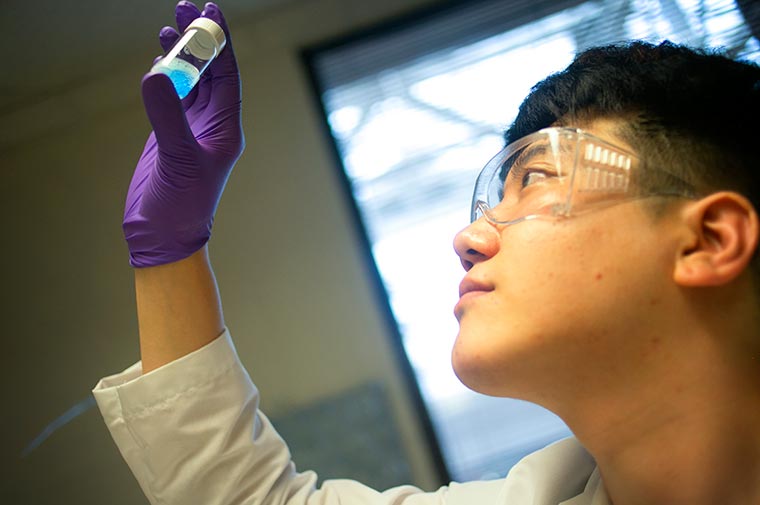 The imaging process uses light that turns into heat, and then into sound, a bit like thunder.

“The peptides on the particle are like tugboats guiding an ocean liner,” Kopelman explained.

The particles were injected into mice, where they infiltrated the cancerous cells and the pH-sensitive dye did its work. Next, the team read the dye by flashing pulses of laser light into the tumor from outside the mouse’s body and recording the ultrasound signal that’s reflected back. 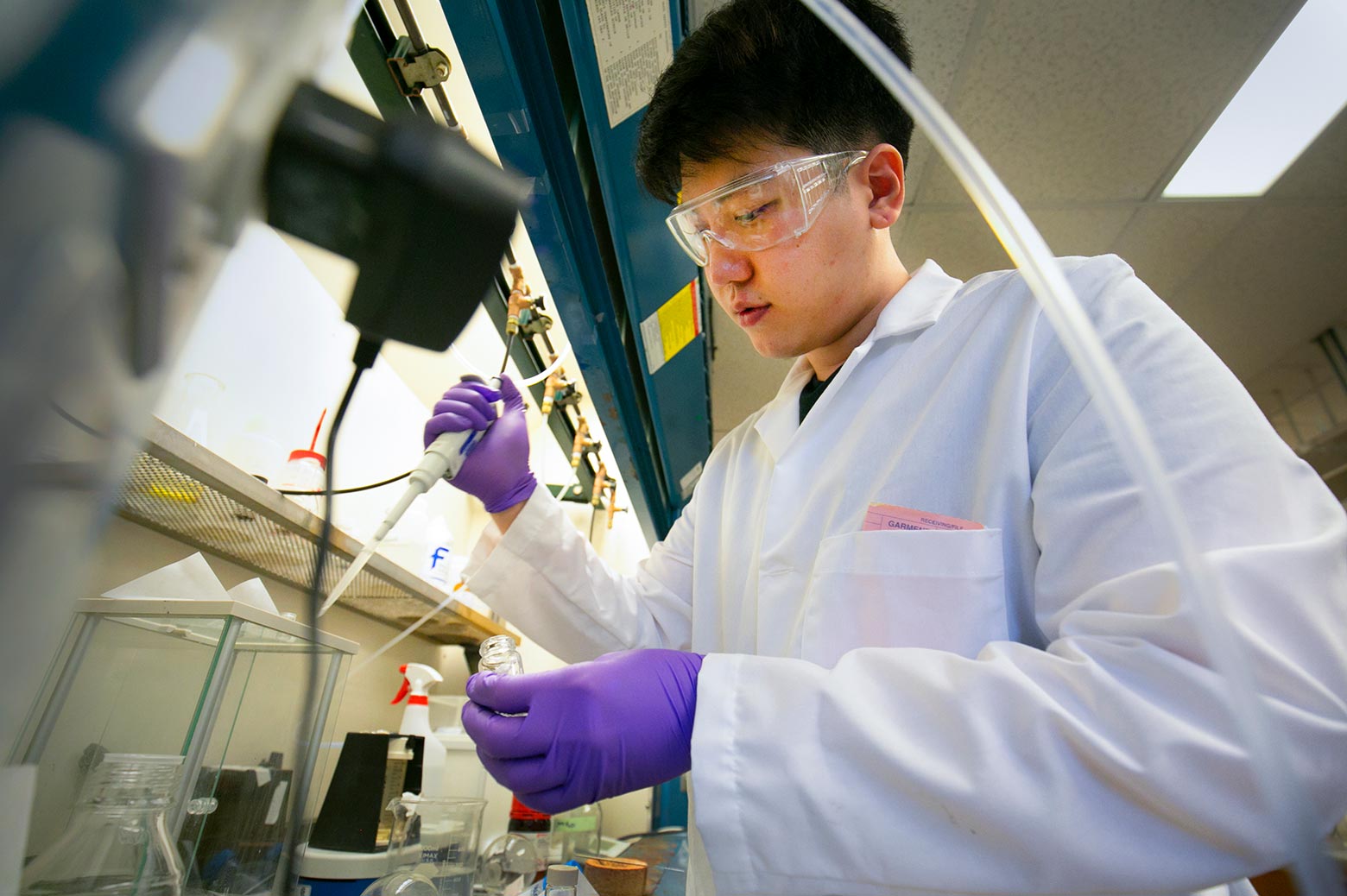 “Inside the body, the laser’s energy turns from light into heat, then from heat into sound, a bit like thunder,” said Wang. “We can use ultrasound to read that sound energy, then digitally convert it back to optical information. That provides a painless, non-invasive way for us to see the color change in the injected dye, even when it’s deep inside the body.”

The researchers caution that an approved treatment is several years off. But they note that the imaging technology is already under clinical trial, as are the individual components of the nanoparticle. In the meantime, they are working on similar approaches that could be used to measure markers other than pH, like potassium and oxygen levels. They envision a treatment that could measure several different aspects of a tumor’s chemistry using a single scan.

The paper is titled “In vivo quantitative imaging of tumor pH by nanosonophore assisted multi-spectral photoacoustic imaging.” The research was supported by funding from the National Institutes of Health through the National Cancer Institute (grant number R01CA186769).

As Ann Arbor’s maker community sprang into action making face shields, Michigan Medicine and the U-M College of Engineering offered a recommended design that is effective and straightforward to produce.| Medium Read
Researchers