The close proximities and confined spaces of the dental office environment in a pandemic pose a host of potential health risks, and it may be even more problematic in dental schools and other large dental offices with similar cubicle set-ups.

It’s a situation University of Michigan engineers have sought to make safer by analyzing the transport of aerosols within the clinics at U-M School of Dentistry. In its role educating dental students, the school has clinics where up to 40 patients can be treated at the same time.

Sensing equipment often used to analyze auto emissions helped the engineering researchers understand areas of concern that included: the 5-foot-high walls that separate each dental cubicle space and the aerosol droplets that are created during procedures that use water jets, such as high speed drilling and ultrasonic cleaning.

“Historic research has looked at very traditional dental settings, like singular practices, singular closable rooms, but the dental school is not like that,” said Romesh Nalliah, associate dean for patient services at the U-MSchool of Dentistry. “We have low barriers between cubicles so that instructors can peek over the top to speak to students.”

Nalliah reached out to U-M’s College of Engineering for help, and Margaret Wooldridge and Andre Boehman, both professors of mechanical engineering, answered the call.

Utilizing high-speed imaging, particle spectrometers, scanning mobility particle sizing systems, and optical particle counters, the two engineers were able to see how the droplets were being created, how many were created, and what happened to them during drilling procedures on mannequins. 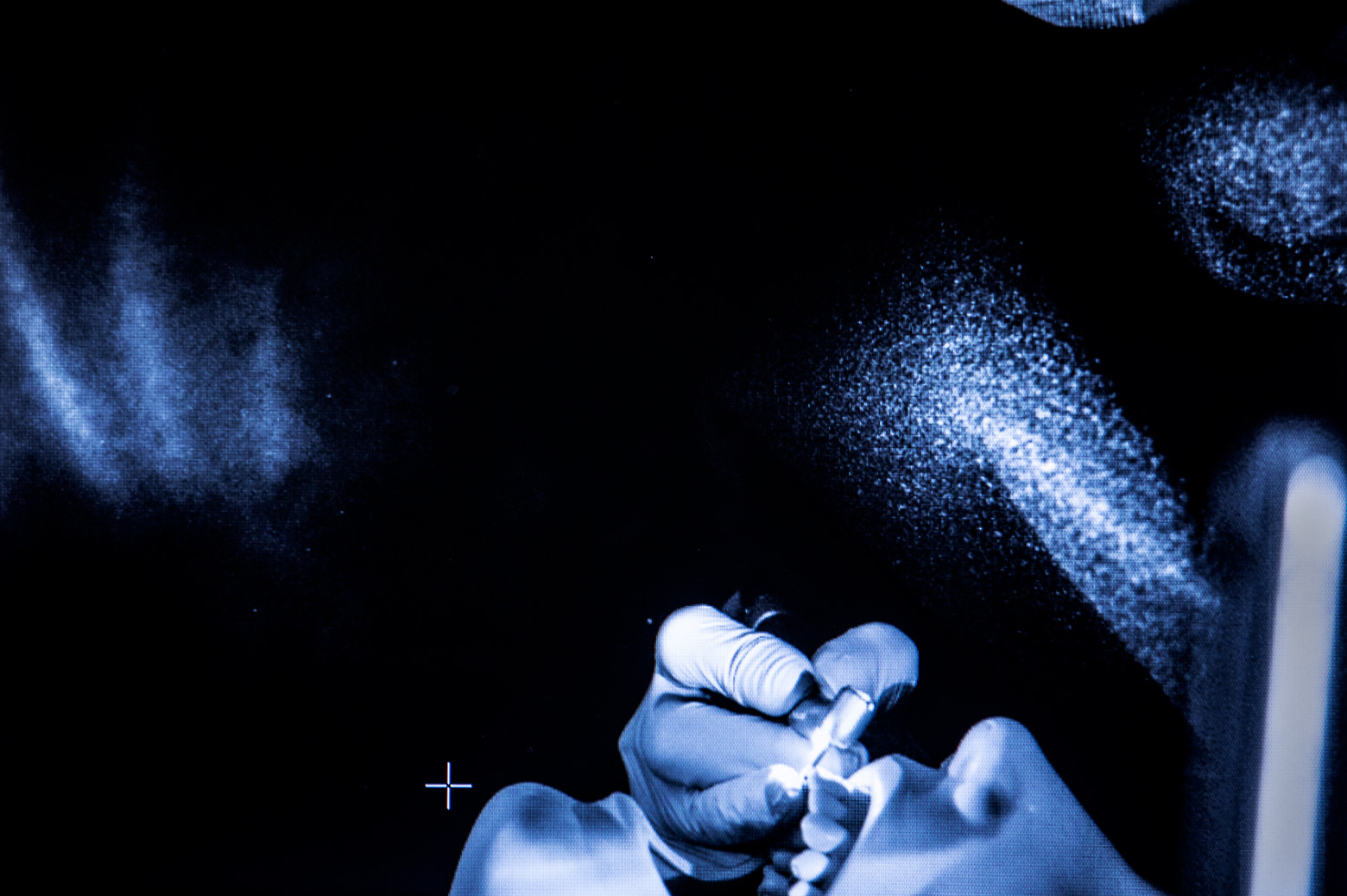 “The results were fascinating,” said Wooldridge, Arthur F. Thurnau professor of mechanical engineering. “We saw things that were intuitive—like when the drill spins along the surface of a tooth, droplets are propelled in the same direction.

“But we also saw huge clouds of droplets that were generated as well. From the sprayed water used to cool the drill and the tooth, droplets would break apart into even smaller droplets. Some droplets bounce off the tooth like billiard balls or a soccer ball. And the droplets hang around, recirculate and form little clouds right by the mouth of the test mannequins used.”

Further testing on aerosol suction devices designed to capture those aerosol particles around the patients’ mouths showed them to have limited effectiveness. The sheer number of variables involved in the treatment setting proved to be a hindrance.

U-M researchers were able to show how droplets could move from one cubicle to the next. Further testing showed that plexiglass barriers, extended above the clinic’s current partitions, could stop the flow of particles between cubicles. 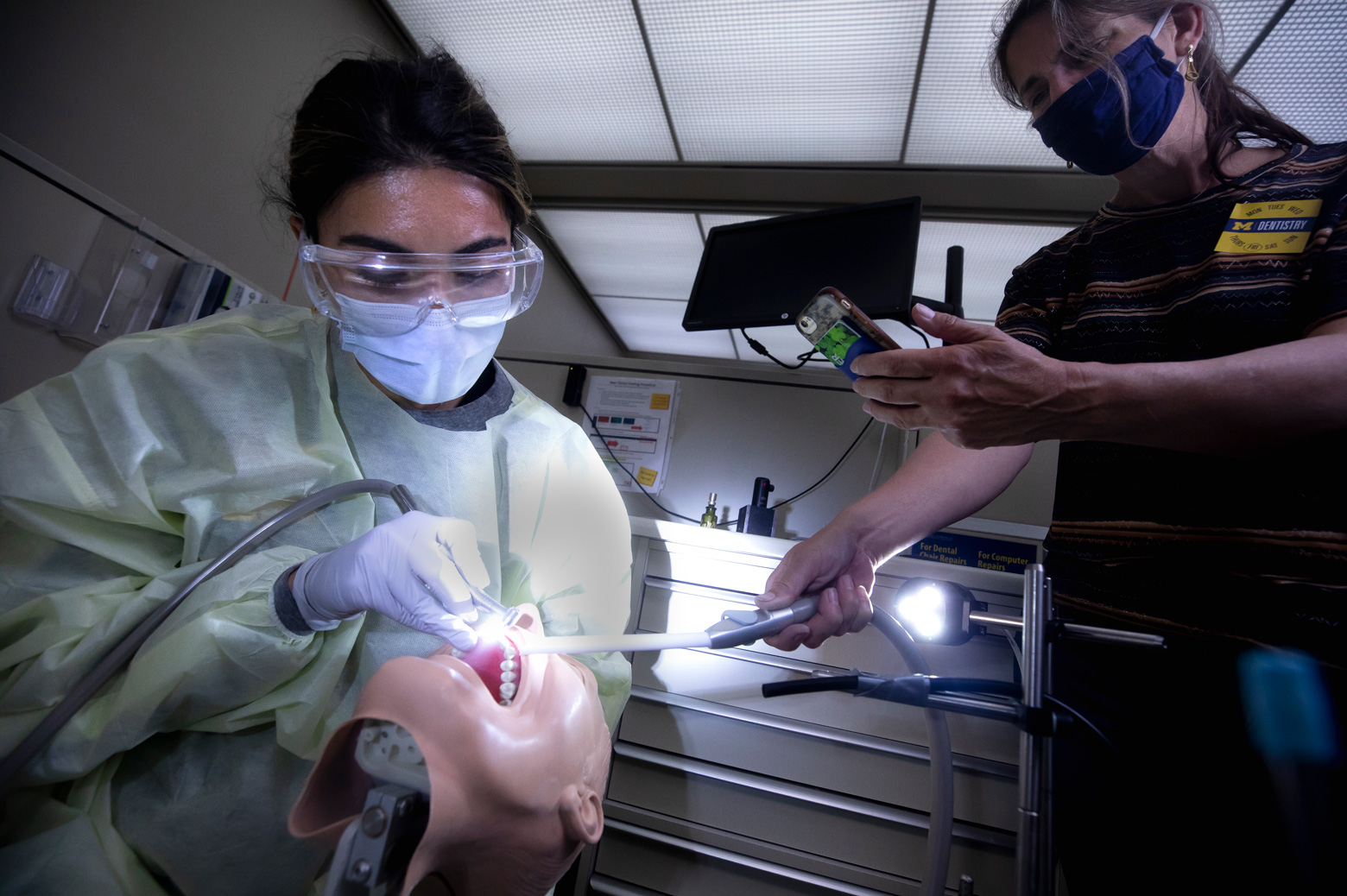 With data from U-M engineers in hand, Nalliah and the School of Dentistry went a step further, working with experts at Michigan Medicine to analyze airflow throughout the clinic. The use of the extended plexiglass, while preventing cubicle to cubicle particle flow, also trapped particles in the same area. That created the potential for exposure for the next patient treated in a cubicle.

To combat that, plexiglass barriers were added to some, but not all, of the treatment areas in order to maintain good air flow, and to waiting periods in addition to cleaning and sanitizing the stations between patients. The clinic now can handle roughly half its typical patient capacity under markedly safer conditions.

“The capacity that we have now is still limited, but much better than what we were first facing,” Nalliah said. “It’s an ongoing, ever-changing, dynamic situation.”

Facilities and businesses across the globe that provide in-person services have had to assess the dangers posed by bringing customers and patients inside their operations. As U-M has worked to find ways to safely provide necessary services, Wooldridge and Boehman’s expertise has routinely been called on. And the university has bolstered their capabilities with the addition of new equipment,

“The aerosol instrumentation that the College of Engineering helped us acquire for COVID-19-related work has been extremely useful in a variety of situations and scenarios,” said Boehman, director of the W.E. Lay Automotive Laboratory. “Both our optical particle sizer and engine exhaust particle sizer have travelled to U-M Med School and the clinics at the School of Dentistry. They’ve even ridden on the blue bus and been to the School of Music Theater and Dance.

“These two instruments have been very useful and accumulated many miles on the road travelling to various labs.”

In March, right after the spread of COVID-19 was declared a national emergency in the U.S., Boehman and Wooldridge worked with Michigan Medicine to examine aerosols created in hospital environments by different methods of oxygen delivery.

And over the summer, Boehman worked with Jesse Capecelatro, an assistant professor of mechanical engineering, and Kevin Maki, the Richard B Couch Development Professor of Marine Hydrodynamics and Associate Professor of Naval Architecture and Marine Engineering, to study particle flows on U-M’s buses.

In both instances, the work produced recommended operational changes and new guidelines for improving safety.