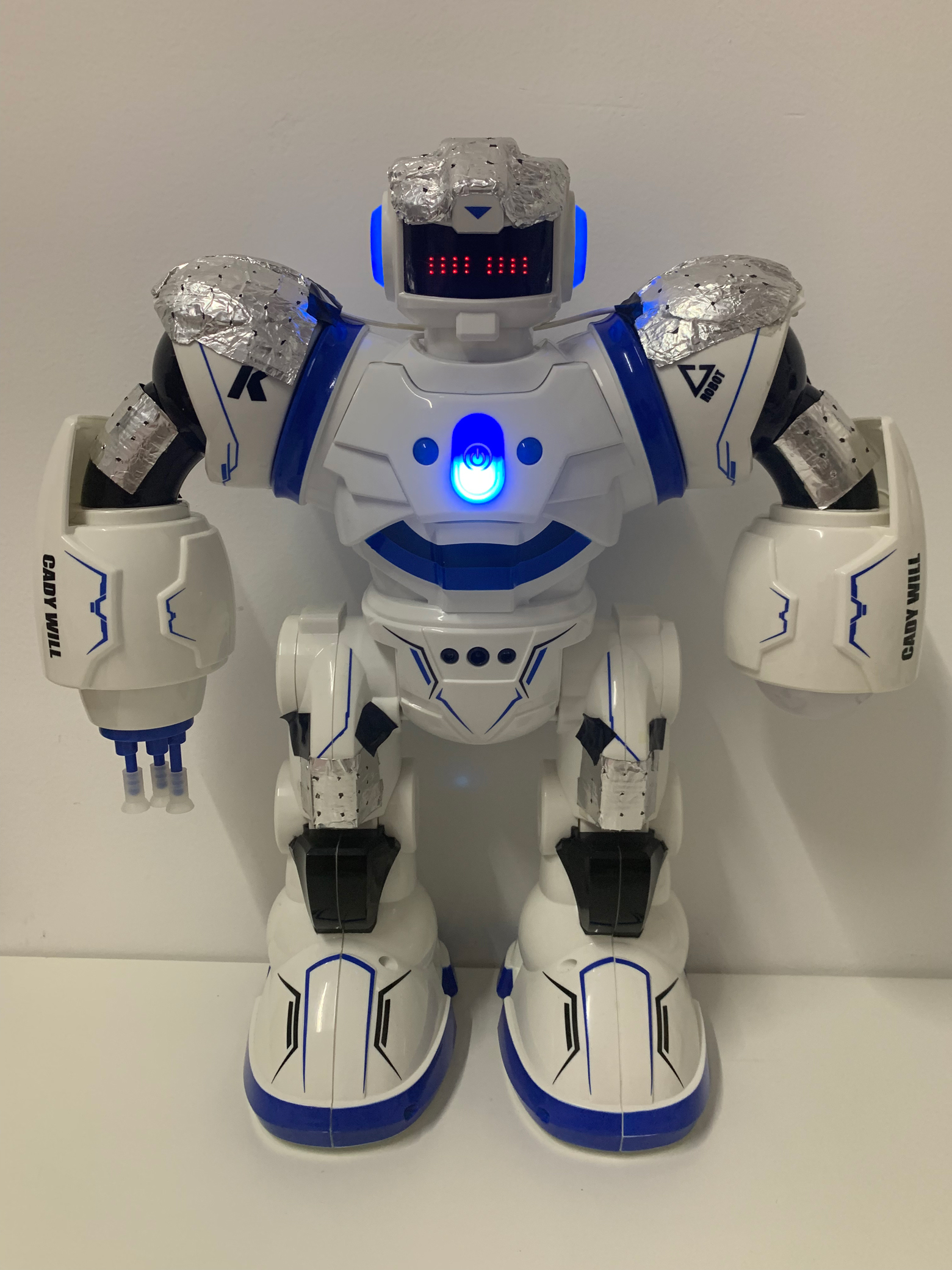 IMAGE:  The team replaced a toy robot’s battery with their new biomorphic zinc-air batteries, applied as patches over the robot’s knees, shoulders, elbows and head. This bio-inspired approach to energy storage, akin fat reserves in animals and humans, could free up both space and weight inside robots while simultaneously increasing the energy capacity. Credit: Mingqiang Wang, Kotov Lab, University of Michigan

A new rechargeable zinc battery can provide much more energy and integrate into the structure of a robot like biological fat reserves store energy in animals, a team led by the University of Michigan has shown. This approach to increasing capacity will be particularly important as robots shrink to the microscale and below—scales at which current stand-alone batteries are too big and inefficient.

“Robot designs are restricted by the need for batteries that often occupy 20% or more of the available space inside a robot, or account for a similar proportion of the robot’s weight,” said Nicholas Kotov, the Joseph B. and Florence V. Cejka Professor of Engineering, who led the research.

Applications for mobile robots are exploding, from delivery drones and bike-lane take-out bots to robotic nurses and warehouse robots. On the micro side, researchers are exploring swarm robots that can self-assemble into larger devices. Multifunctional “structural batteries” can potentially free up space and reduce weight, but until now they could only supplement the main battery.

“No other structural battery reported is comparable, in terms of energy density, to today’s state-of-the-art advanced lithium batteries. We improved our prior version of structural zinc batteries on 10 different measures, some of which are 100 times better, to make it happen,” said Kotov.

The combination of energy density and inexpensive materials means that the battery may already double the range of delivery robots, he added.

“This is not the limit, however. We estimate that robots could have 72 times more power capacity if their exteriors were replaced with zinc batteries, compared to having a single lithium ion battery,” said Mingqiang Wang, first author and recently a visiting researcher to Kotov’s lab.

To demonstrate their batteries, the researchers experimented with regular-sized and miniaturized toy robots in the shape of a worm and a scorpion. The team replaced their original batteries with zinc-air cells. They wired the cells into the motors and wrapped them around the outsides of the creepy crawlers.

“Batteries that can do double duty—to store charge and protect the robot’s ‘organs’—replicate the multifunctionality of fat tissues serving to store energy in living creatures,” said Ahmet Emre, a PhD student in biomedical engineering in Kotov’s lab.

The downside of zinc batteries is that they maintain high capacity for about 100 cycles, rather than the 500 or more that we expect from the lithium ion batteries in our smartphones. This is because the zinc metal forms spikes that eventually pierce the membrane between the electrodes. The strong aramid nanofiber network between the electrodes is the key to the relatively long cycle life for a zinc battery. And the inexpensive and recyclable materials make the batteries easy to replace.

Beyond the advantages of the battery’s chemistry, Kotov says that the design could enable a shift from a single battery to distributed energy storage, using graph theory approach developed at U-M.

“We don’t have a single sac of fat, which would be bulky and require a lot of costly energy transfer,” said Kotov. “Distributed energy storage, which is the biological way, is the way to go for highly efficient biomorphic devices.”

A paper on this research is to be published in Science Robotics, titled, “Biomorphic structural batteries for robotics.”

This research is funded by the Department of Defense, the National Science Foundation and the Air Force Office of Scientific Research. Battery testing took place at the U-M Energy Institute. Kotov is also a professor of chemical engineering, materials science and engineering and macromolecular science and engineering. Wang is a postdoctoral researcher at Harbin Institute of Technology in China.

The University of Michigan has applied for patent protection and is seeking commercial partners to bring the technology to market.

U-M’s Department of Naval Architecture and Marine Engineering (NAME) enters partnership with one of the nation’s most innovative research & technology firms, Navatek LLC, to advance research in the area of data-model fusion for future naval platform design and operation.| Medium Read
Researchers