$7.75M for mapping circuits in the brain

by Kate McAlpine
Michigan Engineering
August 3, 2017
A new NSF Tech Hub will put tools to rapidly advance our understanding of the brain into the hands of neuroscientists.| Medium Read
Enlarge 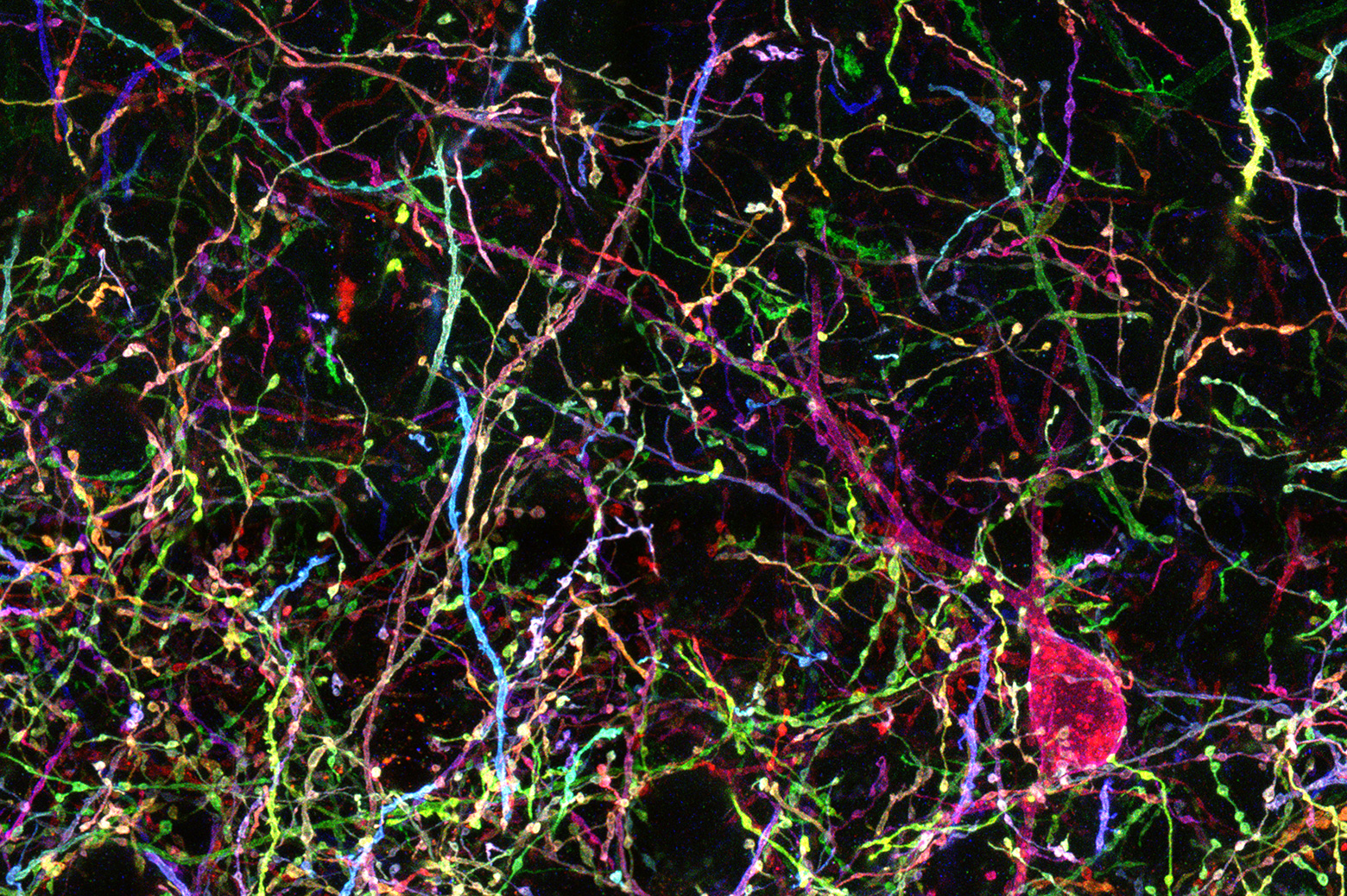 The technology exists to stimulate and map circuits in the brain, but neuroscientists have yet to tap this potential.

Now, developers of these technologies are coming together to demonstrate and share them to drive a rapid advance in our understanding of the brain, funded by $7.75 million from the National Science Foundation.

“We want to put our technology into the hands of people who can really use it,” said Euisik Yoon, leader of the project and professor of electrical engineering and computer science at the University of Michigan.

By observing how mice and rats behave when certain neural circuits are stimulated, neuroscientists can better understand the function of those circuits in the brain. Then, after the rodents are euthanized, they can observe the neurons that had been activated and how they are connected. This connects the behavior that they had observed while the rodent was performing a controlled experiment with a detailed map of the relevant brain structure.

We can achieve structural and functional mapping at an unprecedented scale.Euisik Yoon, BME and EECS professor
Tweet

It could lead to better understanding of disease in the brain as well as more effective treatments. In the nearer term, the details of neural circuitry could also help advance computing technologies that try to mimic the efficiency of the brain.

Over the last decade or so, three tools have emerged that, together, can enable the mapping of circuits within the brain. The most recent, from U-M, is an implant that uses light to stimulate specific neurons in genetically modified mice or rats and then records the response from other neurons with electrodes. 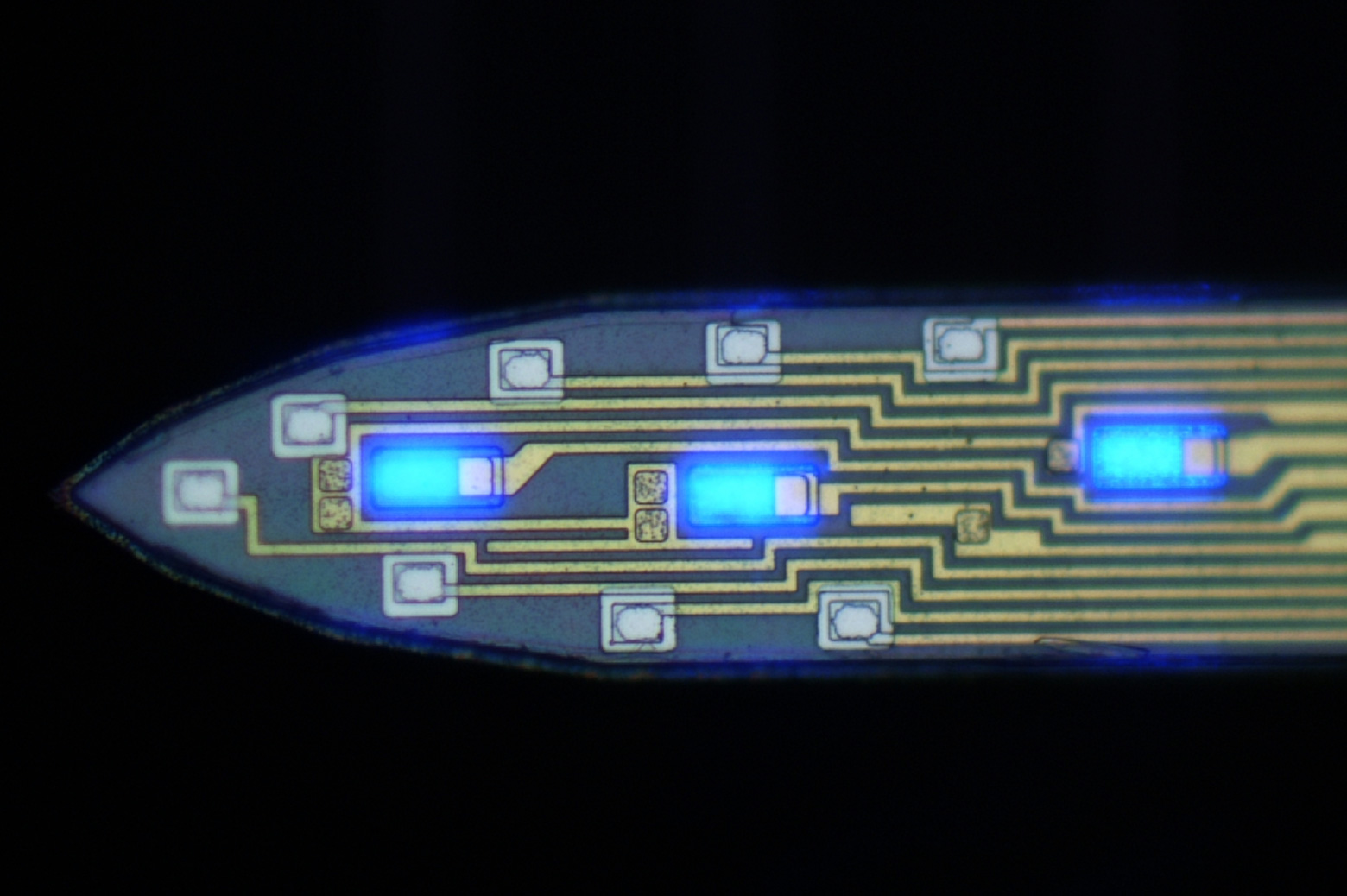 IMAGE:  Probes like this one, which stimulate neurons with light and then record activity with electrodes, are just one facet of the technology suite that can help neuroscientists map circuits in the brain. Photo: Fan Wu, Yoon Lab, University of Michigan

Unlike earlier methods to stimulate the brain with light, with relatively large light-emitters that activated many nearby neurons, the new probes can target fewer neurons using microscopic LEDs that are about the same size as the brain cells themselves. This control makes the individual circuits easier to pick out.

The “pyramidal” neurons that cause action—rather than inhibit it—will be genetically modified so that they respond to the light.

“They are just one of the neuron types we are seeking to map,” said John Seymour, one of the co-investigators and U-M assistant research scientist in electrical engineering and computer science. “If you can record from motor cortex pyramidal neurons, you can predict arm movement, for example.”

John Seymour explains how the new grant will help neurotechnologists further research to enable a better understanding of the pathways in the brain.

To visualize the structure of pyramidal cells and other kinds of neurons, researchers need a way to see each tree in the brain’s forest. For this, co-investigator Dawen Cai, U-M assistant professor of cell and developmental biology, has been advancing a promising approach known as Brainbow. Genetically modified brain cells produce fluorescent tags, revealing each cell as a random color.

When it is time to examine the brain, a technique to make the brain transparent will remove all the fatty molecules from a brain and replace them with a clear gel, making it possible to see individual neurons. It was pioneered by another co-investigator, Viviana Gradinaru, who is a professor of biology and biological engineering at the California Institute of Technology.

“Not only may we understand how the signal is processed inside the brain, we can also find out how each neuron is connected together so that we achieve structural and functional mapping at an unprecedented scale,” Yoon said.

While these are the central tools, others at Michigan are working on methods to make the electrodes that record neuron activity even smaller and therefore more precise. In addition, a carbon wire electrode design could even pick up the chemical activity nearby, adding measurements of neurotransmitters as a new dimension of information.

To share these new tools, the team will bring in neuroscientists for annual workshops and then provide them with the hardware and software they need to run experiments in their own labs. For the tools that prove to be most useful, they will seek commercialization opportunities so that they remain available after the project ends.

The project is called Multimodal Integrated Neural Technologies (MINT) and has been awarded as a 5-year National Science Foundation NeuroNex Technology Hub.

The neural probes with micro LEDs are made in the Lurie Nanofabrication Facility at U-M.