As you stretch gold into a strand one atom thick, an expressway for heat opens up. It’s called a quantum of thermal conductance and Michigan Engineers just observed this phenomenon for the first time at room temperature.

They report their results in a paper published online in the journal Science today.

A quantum of thermal conductance represents the largest possible heat flow through a channel in a material. You can think of the channel as a highway for the flow of heat. The researchers proved that gold atomic chains have such a channel at room temperature.

The findings provide insights into how heat flows in the atomic limit, and they could inform development of next-generation integrated circuits and other nanotechnologies.

For more than two centuries, scientists and engineers have studied how heat flows. Joseph Fourier developed a law to describe heat transfer in matter in the early 1800s. Fourier’s law plays a central role in heat transfer and classical physics and is useful in designing devices. Heat flow often needs to be enhanced as in the case of electronics, or reduced in thermoelectric devices for efficient conversion of heat to electricity. Fourier’s law works very well for macroscale devices but breaks down in single-atom wide wires. 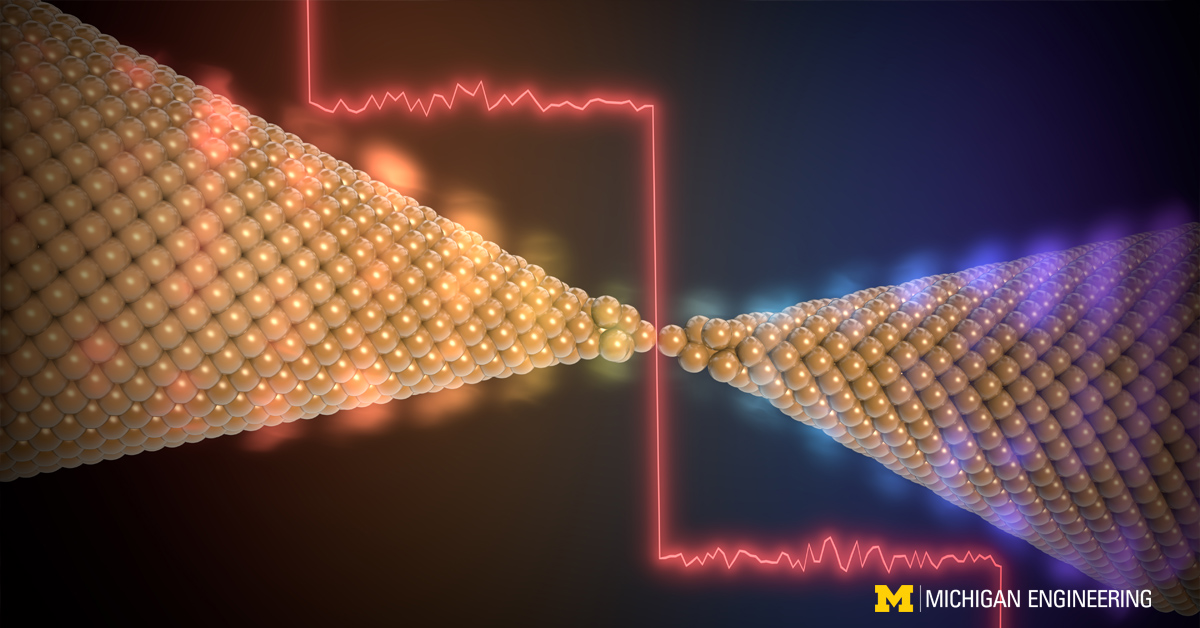 IMAGE:  The illustration above shows a single-atom junction created by stretching a microscopic wire and the thermal conductance recorded at this point.

“Instead of looking at bulk materials as Fourier did, we’re looking at a nanoscale wire that is just one atom thick,” said Longji Cui, a doctoral student in mechanical engineering and the lead author of the paper. “The question we asked is: How does heat flow when you go to the smallest possible dimensions?”

Engineers have been working to answer this question for more than two decades. Theoretical predictions have suggested that at the atomic scale heat transport is governed by quantum mechanics and there is an upper limit, or maximum, to the heat flow possible through any single-atom-wide wire.

“One-atom-wide wires, also called single-atom junctions, are akin to highways where, if the flow of heat is unimpeded, the heat flow rate reaches a value that is governed by only fundamental physical constants,” said Wonho Jeong, a post-doctoral fellow in mechanical engineering and an equally contributing lead author on the paper.

While this heat flow behavior governed by quantum mechanics has been theorized, it had only been observed at ultra-cold temperatures. However, to create useful nanoscale systems, the effects need to be observed at room temperatures. Towards this goal, the U-M team developed picowatt-resolution heat flow sensors called “calorimeters” that were able to measure heat flows in single-atom strands of gold and platinum. The picowatt resolution they achieved is 100 times finer than their previous devices, enabling them to observe quantized heat flow properties in gold.

“It took us years to improve the calorimeters to be sensitive enough and be properly integrated into the actual experiment,” said Edgar Meyhofer, professor of mechanical engineering and co-author on the paper.

The calorimeter designers on the team – Jeong and Sunghoon Hur, a doctoral student in mechanical engineering –  collaborated closely with their colleague, Cui, to iterate on the design and nanofabrication of the calorimeter and integrate it into a unique experimental setup. 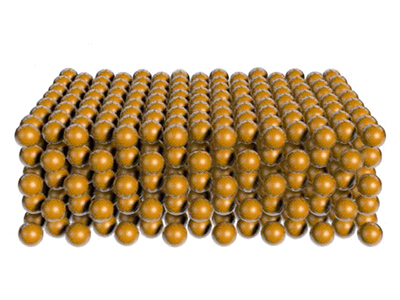 IMAGE:  Array of gold atoms that create a microscopic wire.

“Instead of quickly publishing, we needed to go back to the drawing board several times. Sometimes we would solve one problem but create two more. However, our strong collaborative efforts enabled us to overcome these challenges,” said Hur, a doctoral student in mechanical engineering

The efforts of all involved were nothing short of “heroic,” said Jon Malen, a professor at Carnegie Mellon University who was not involved in the work.

“Reddy and Meyhofer demonstrate heroic experimental work in the Science article where they for the first time ever directly measured how heat moves through a single-atom junction and identify quantized levels of heat conduction,” Malen said. “They continuously surprise me with their selection of difficult and important problems, and their patient and deliberate experiments that become immediate benchmarks for the scientific community.”

The work involved international collaboration as well. Theorists Juan Carlos Cuevas, a professor at Universidad Autónoma de Madrid, as well as Fabian Pauly and Peter Nielaba, professors at the University of Konstanz in Germany, performed critical calculations using state-of-the-art computational tools to model the flow of heat in single-atom wires and provide a direct comparison to the experimental data, the U-M researchers said.

“Going forward, this work paves the way for probing the ultimate limits of energy and heat flow in a host of different materials, including atomic and molecular sized devices and organic molecules,” said Pramod Reddy, a professor of mechanical engineering at U-M and a co-author on the paper.

The work performed at the University of Michigan was funded by the Department of Energy (Basic Energy Sciences), the Office of Naval Research and the National Science Foundation. 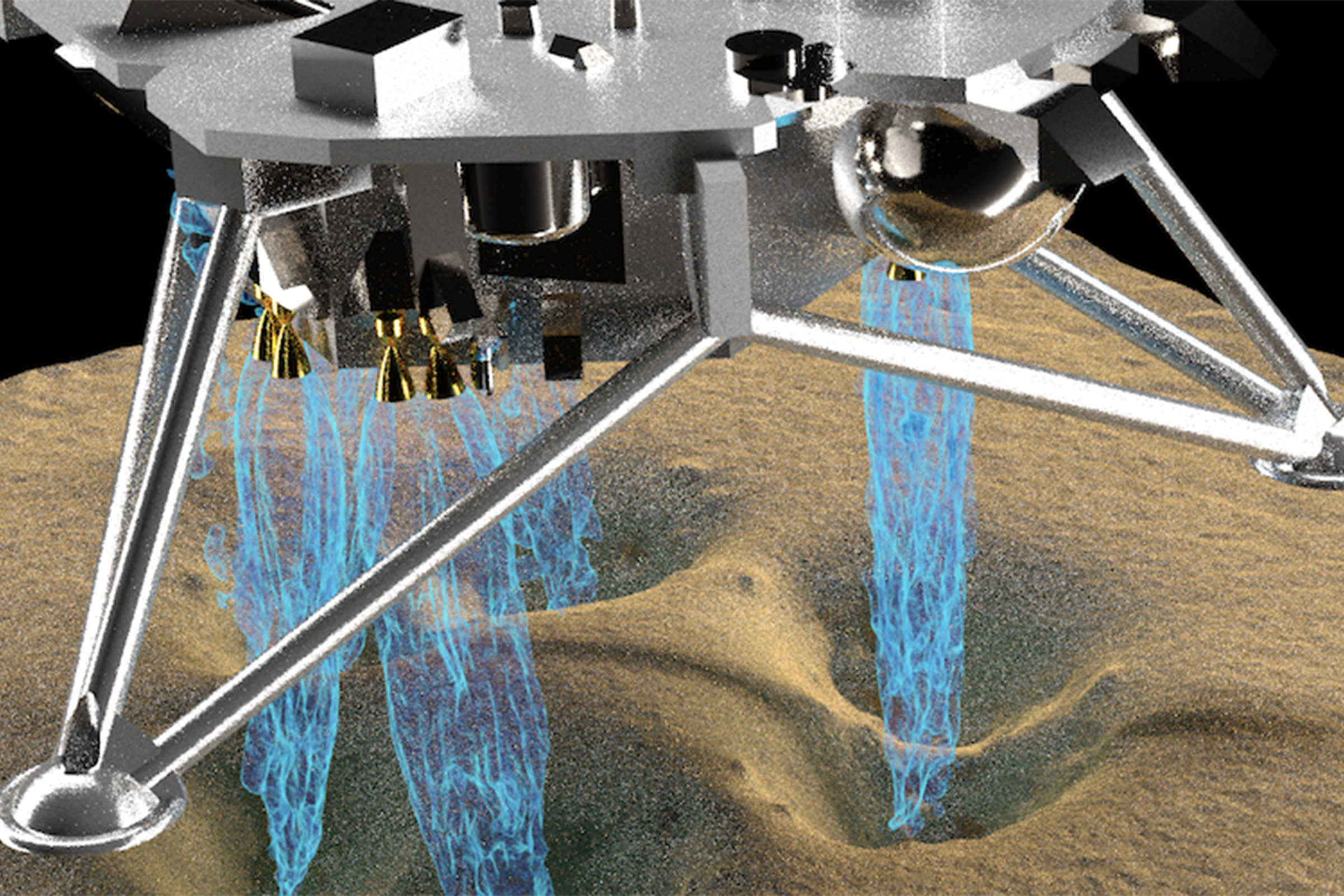