In a new drug-screening technique that relies on gold nanorods to twist light, a red glow can signal the failure of a medication being designed to treat “amyloid” diseases such as Type II diabetes and pancreatic cancer.

The technique was developed by researchers from the University of Michigan, Jilin University in China, and the Federal University of São Carlos in Brazil. It harnesses a property called “chirality,” which is found in nanostructures, biological molecules like proteins, and lightwaves. A chiral object cannot be superimposed on its mirror image, like a left and right hand, or helices that twist in different directions.

The researchers were able to take advantage of the chirality of a protein marker for these diseases, called islet amyloid polypeptides. These proteins link up into twisted chains and accumulate in tissues. Amyloid proteins that form corkscrew-shaped fibers also play a role in Parkinson’s and Huntington’s diseases.

In the new approach, gold nanorods are coated with the harmful proteins, which form long spring-shaped fibers with three nanorods per turn. These structures appear bright red when viewed between two oppositely-angled polarizers, or light filters, because their twisting, chiral shapes can turn the polarization of the light. 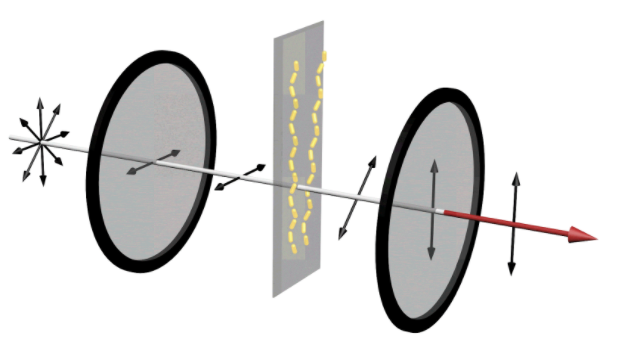 IMAGE:  In a device that can reveal whether amyloid proteins are assembling into chains, unpolarized light enters a horizontal polarizer. This only allows waves oscillating in the horizontal direction to get through. Then, if the amyloid proteins have assembled the gold nanorods into chains, red light gets twisted, changing the angle of its polarization. Then, when it passes through the vertical polarizer, the portion of the light oscillating in the vertical direction gets through. This results in a strong red signal that can be seen with the naked eye. Credit: Jun Lu, Jilin University and University of Michigan.

“The strong twisting of the light allows for the drug screening results to be seen with the naked eye, instead of using complicated instruments,” said Kun Liu, a professor of chemistry at Jilin University and co-corresponding author on a paper newly published in Science.

The nanorods—each about 50 nanometers long and 20 nanometers wide—offer additional benefits.

“The periodic helical chains increase the twisting of light by 4,600 times, which makes them visible under very difficult biological conditions. And the nanorods also speed up the process of forming amyloid chains, which is critical for rapid drug discovery,” said Nicholas Kotov, co-corresponding author of the paper and the Irving Langmuir Distinguished University Professor of Chemical Sciences and Engineering at U-M.

Typically, amyloid polypeptides take a few days to a week to link up. This slows down the testing of potential drugs. The nanorods accelerate the process of amyloid polypeptides to one day. This occurs because the rods are coated with a surfactant chemical called cetrimonium bromide, similar to the cetrimonium chloride found in some shampoos and conditioners. When the amyloid proteins bind to the barrel of the gold rod, the surfactant helps them to form a coiled shape that facilitates bonding to other amyloids.

When the amyloids connect, their gold rods form a helix, twisting around the protein rope. And because the gold interacts strongly with red light, these highly organized helices twist red light waves very strongly.

This is what leads to the easy detection of whether a drug to prevent amyloid chains has worked or not. The set-up puts the realistic mixture of cells, blood components, drug molecules and amyloid proteins that drugs encounter in the body in between two polarizers. The first polarizer only allows light to pass if it oscillates in the vertical direction. The second polarizer only passes light waves moving in the horizontal direction. 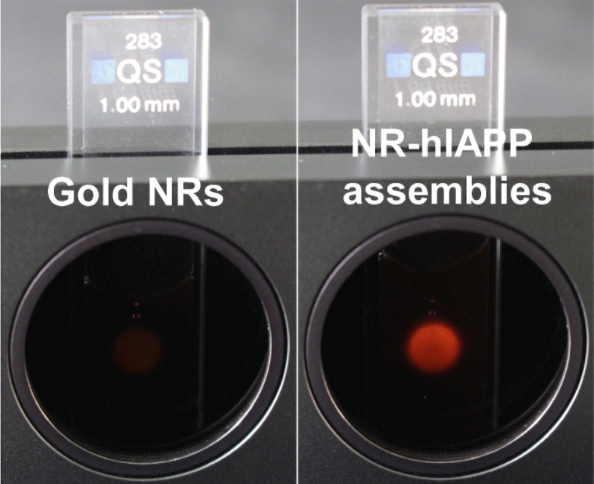 IMAGE:  In the device on the left, gold nanorods permit a small amount of light through the two crossed-polarizers. This is akin to the signal showing that a drug designed to prevent amyloid plaques from forming is working. However, when the amyloid proteins assemble the gold nanorods into helices, a clear red light is visible through the polarizers, revealing that a drug has failed. Credit: Jun Lu, Jilin University and University of Michigan.

“While the experiments fine-tuned the conditions best for detecting amyloid chains, the computer simulations were fundamental to unraveling the complex interactions between gold, surfactants and the protein fragments, which need to interact simultaneously to make the platform work,” said André de Moura, a professor at the Federal University of São Carlos and co-author of the paper.

The international team also established unifying design principles for how to make twisted nanostructures that can significantly twist light, a feature that is critical for many applications.

The work represents a seven-year journey for Jun Lu, now a research fellow in chemical engineering at U-M. At the beginning of his PhD under Liu in China, Lu started out trying to coax human islet amyloid polypeptides to self-assemble, with gold rods attached. After roughly a year, he and Liu had found weak signs that the assemblies were twisting light. Following a serendipitous meeting in the airport with Kotov, the team started working on the mechanism of light interactions and the pharmaceutical uses of these assemblies. 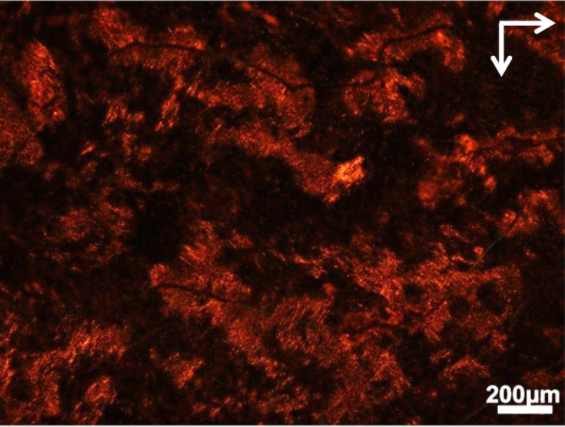 IMAGE:  The view through the polarizer shows where light-twisting structures have formed in a soup of cells and biological materials. Credit: Jun Lu, Jilin University and University of Michigan.

Lu worked on making the effect bigger, sizing the nanorods to complement the distance between nanorods. The international team explored the drug screening application, and Lu developed simulations using the powerful Great Lakes supercomputer at the University of Michigan—while his collaborator at the University of São Paulo in Brazil, Kalil Bernardino, used the SDumont Supercomputer—to confirm the mechanisms behind the experimental measurements.

While the project was long, Lu says, “Every effort is well rewarded. It’s just like a dream come true.”

The paper is titled, “Enhancement of optical asymmetry in supramolecular chiroplasmonic assemblies with long-range order,” and was published online by the journal Science on Thursday, Feb. 25, 2021.

Kotov is also the Joseph B. and Florence V. Cejka Professor of Chemical Engineering.