Until the robots roll up, Korean eatery Miss Kim looks like any other COVID-stilled storefront in downtown Ann Arbor, with chairs upended on tables and hastily scrawled signs papering the windows. Inside, chef and managing partner Ji Hye Kim, a University of Michigan alum, cooks takeout orders. While the restaurant does a brisk carryout business, Kim says she brings in less than half the revenue she did before COVID closed the dining room.

Business is booming, however, for the trickle of three-wheeled, autonomous REV-1 delivery robots that silently park themselves at Miss Kim’s curb, ready to be loaded with food before they wheel away to pre-programmed destinations. Refraction AI, a University of Michigan startup that began delivering food in late 2019, says its pilot deployment of eight robots is doing four times as many runs since the crisis began.

“We can deliver for about half the price of conventional delivery services,” said Matthew Johnson-Roberson, co-founder of Refraction AI and a U-M associate professor of naval architecture and engineering. “We thought of that as a nice benefit for restaurant operators, but we had no idea how important it would become as restaurants struggle to get through the crisis. I’m glad that we’re also able to add some capacity to the delivery infrastructure and help restaurants get more food out to customers.”

REFRACTION AI IN THE NEWS 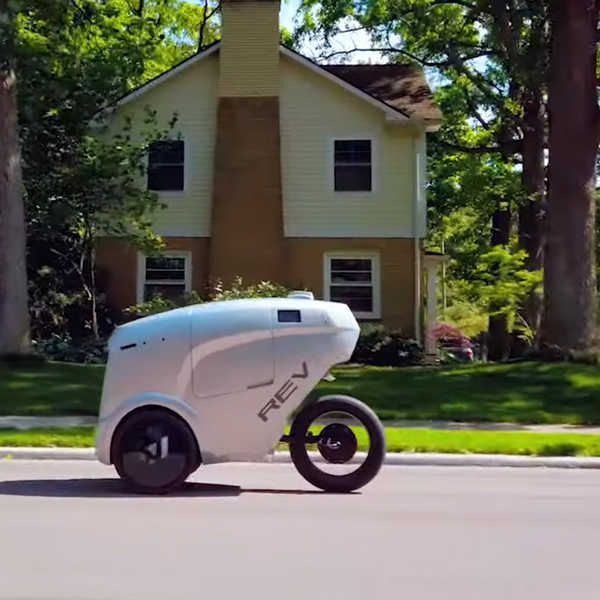 “This moment is a call to arms for robotics makers to really bring their technology to market that helps people."

Refraction AI was co-founded in late 2019 by Johnson-Roberson and mechanical engineering assistant professor Ramanarayan Vasudevan with the help of U-M’s Office of Technology Transfer. Miss Kim is one of five pilot program restaurants that use the robots for some of their Ann Arbor deliveries. Approximately 500 customers are participating in the pilot; they order food through a custom app.

The battery-powered robots have a top speed of about 15 miles per hour and operate mainly in bike lanes. Their low speed enables them to use inexpensive camera-based navigation systems, making their cost feasible for a delivery service.

While ordering food for delivery has been touted as a way to support local businesses in a time of crisis, Kim points out that traditional delivery services charge restaurants hefty fees that eat up as much as 30% of per-order revenue. She says the REV-1 deliveries provide an easy alternative that’s also safer and easier for her employees.

Refraction AI has installed UV sterilizing lights in the robots’ food compartments, and now wipes down the robots between deliveries, but the delivery system is otherwise unchanged from the restaurants’ perspective. 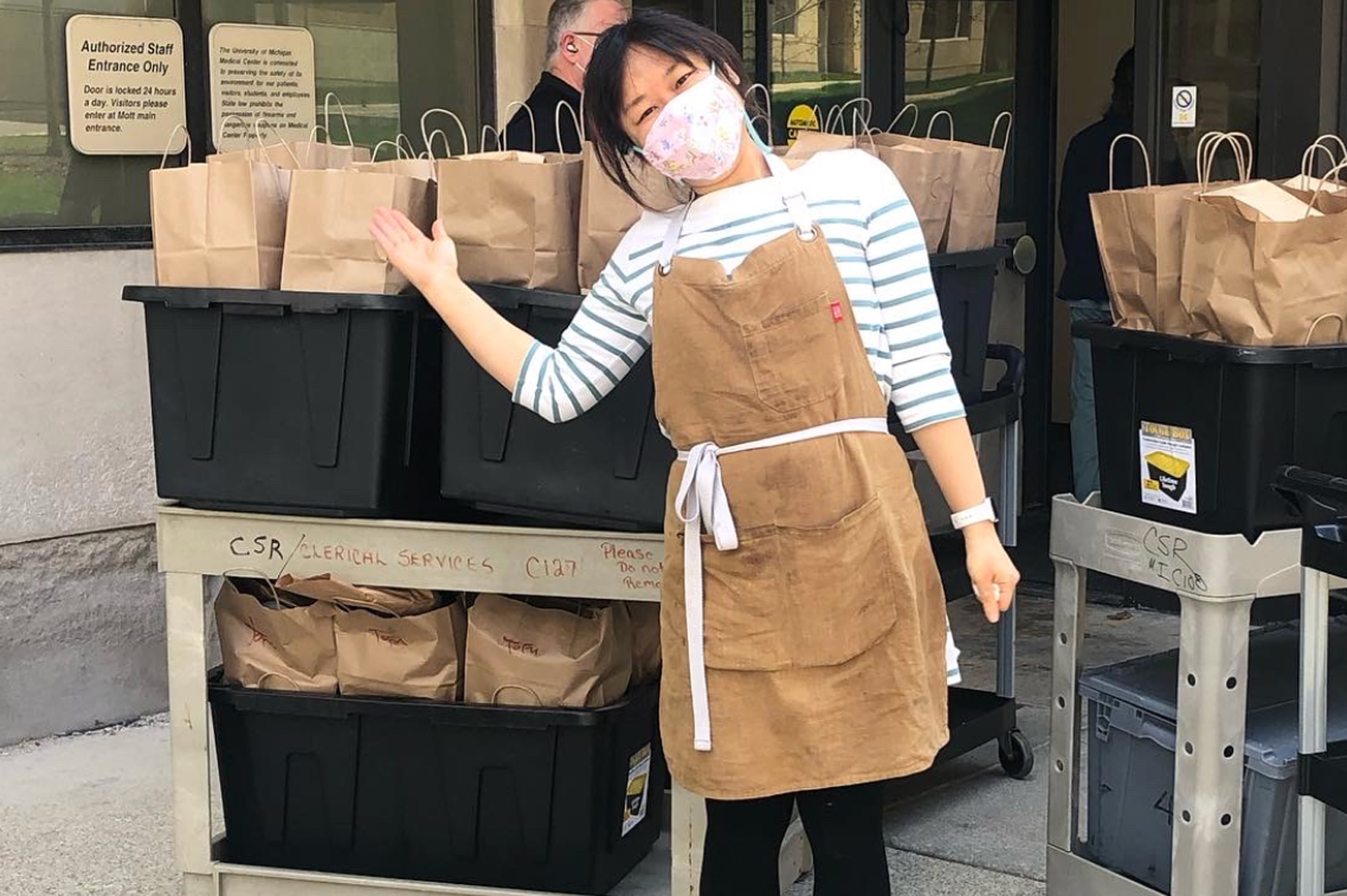 “We had to educate [human] drivers about not entering the restaurant, about how to do contact-free pick-up, all that stuff,” Kim said. “With a robot, they pull up, we drop the food in, close it, and it’s on its way.”

End users like Jessica Sendra say the REV-1s have been a valuable option as the COVID pandemic has stretched delivery networks to their limit. Sendra has been getting groceries delivered through Refraction AI’s recently launched partnership with Ann Arbor market The Produce Station.

“It’s really hard to get a [grocery] delivery slot from anybody right now, so when I heard they were looking for people, I said ‘yes, definitely,’” Sendra said. “They sterilize everything and you just flip open the lid, pull out your groceries, close it and it goes on its way. It’s very easy.”

For Refraction AI, however, adapting to the age of COVID hasn’t been so seamless. The company has had to rethink the logistics of its entire business to keep running. The staff is building robots as fast as it can and Johnson-Roberson says it has been a challenge for its 15 employees to adapt and keep up.

Assembly workers at Refraction AI’s space in downtown Ann Arbor now work tag-team style, with only one employee working on a robot at any given time. The two employees—called “tele-ops drivers”— that monitor the robots via a wireless data connection now work from home, using a remote setup that enables them to take control of the delivery vehicles if they get into a situation that their autonomous systems can’t navigate.

Johnson-Roberson, for his part, is immersed in a world of video chats, as the very hands-on business of building and operating robots is increasingly done electronically.

“Building robots is an incredibly physical task,” he said. “You’re always making changes, testing, trying something else. Trying to keep that iteration cycle going remotely is a challenge. But it also forces us to really lean into all this technology that we’ve created. We’re finding that we don’t necessarily have to lay people off or slow down, we just need to find new ways of doing things. I think we’ve been pretty successful at that, and I hope we’re helping our customers do the same.”

The company is working with Roush Industries, of Livonia, Michigan, to ramp up production with the goal of having 25 robots on the road by mid-summer. Those robots will serve more restaurants in Ann Arbor, and also deliver for the company’s recently launched grocery delivery service. Johnson-Roberson sees his role helping businesses through the crisis as just the beginning of a new era of robots improving life for us humans.

“In this crisis, we’re all seeing how some are putting themselves at risk so that others can enjoy the benefits,” he said. “I’m hoping that we can build models that are more ethical, more sustainable and more just, and I hope that this is a moment that catalyzes roboticists to play a role in that by trying as hard as they can to push the technology from the lab out there into the real world.”

Researchers are working with the city on two key initiatives to address food availability for elderly and low-income populations.| Short Read

The ARC works to solve a broad set of issues pertaining to the modeling and simulation of ground vehicle systems.| Short Read
Researchers