Nacre, the rainbow-sheened material that lines the insides of mussel and other mollusk shells, is known as the toughest material on Earth. Now, a team of researchers led by the University of Michigan has revealed precisely how it works, in real time.

More commonly known as mother-of-pearl, Nacre’s combination of hardness and resilience has mystified scientists for more than 80 years. If humans could mimic it, it could lead to a new generation of ultra-strong synthetic materials for structures, surgical implants and countless other applications.

“How mollusks can make such a tough material in the natural environment of the ocean has baffled generations of scientists,” said Robert Hovden, an assistant professor of materials science and engineering at U-M and an author on the paper. “We humans can make tougher materials using unnatural environments, for example extreme heat and pressure. But we can’t replicate the kind of nano-engineering that mollusks have achieved. Combining the two approaches could lead to a spectacular new generation of materials, and this paper is a step in that direction.”

Using electron microscopy and micro-indentation techniques at U-M’s Michigan Center for Materials Characterization, the material scientists discovered a nanoscale architecture of organic and inorganic material that combines the best properties of layers and solids, hardness and resilience, into a nearly indestructible supermaterial. A paper detailing the new discoveries was published October 23 in Nature Communications.

Researchers have known the basics about nacre for decades—it’s made of microscopic “bricks” of a mineral called aragonite, laced together with a “mortar” made of organic material. This bricks-and-mortar arrangement clearly lends strength, but nacre is far more resilient than its materials suggest. Hovden’s team, which included U-M materials science graduate research assistant Jiseok Gim as well as geochemists from Australia’s Macquarie University and elsewhere, worked together to crack the mystery.

Using tiny piezo-electric micro-indenters, they were able to exert force on the shells while they were under an electron microscope and watch what happened in real time. They revealed a structure that bounces back from impact with more finesse than anyone imagined.

They found that the “bricks” are actually multi-sided tablets only a few hundred nanometers in size. Ordinarily, these tablets remain separate, arranged in layers and cushioned by a thin layer of organic “mortar.” But when stress is applied to the shells, the “mortar” squishes aside and the tablets lock together, forming what is essentially a solid surface. When the force is removed, the structure springs back, without losing any strength or resilience.

This resilience sets nacre apart from even the most advanced human-designed materials. Plastics, for example, can spring back from an impact, but they lose some of their strength each time. Nacre lost none of its resilience in repeated impacts at up to 80% of its yield strength. 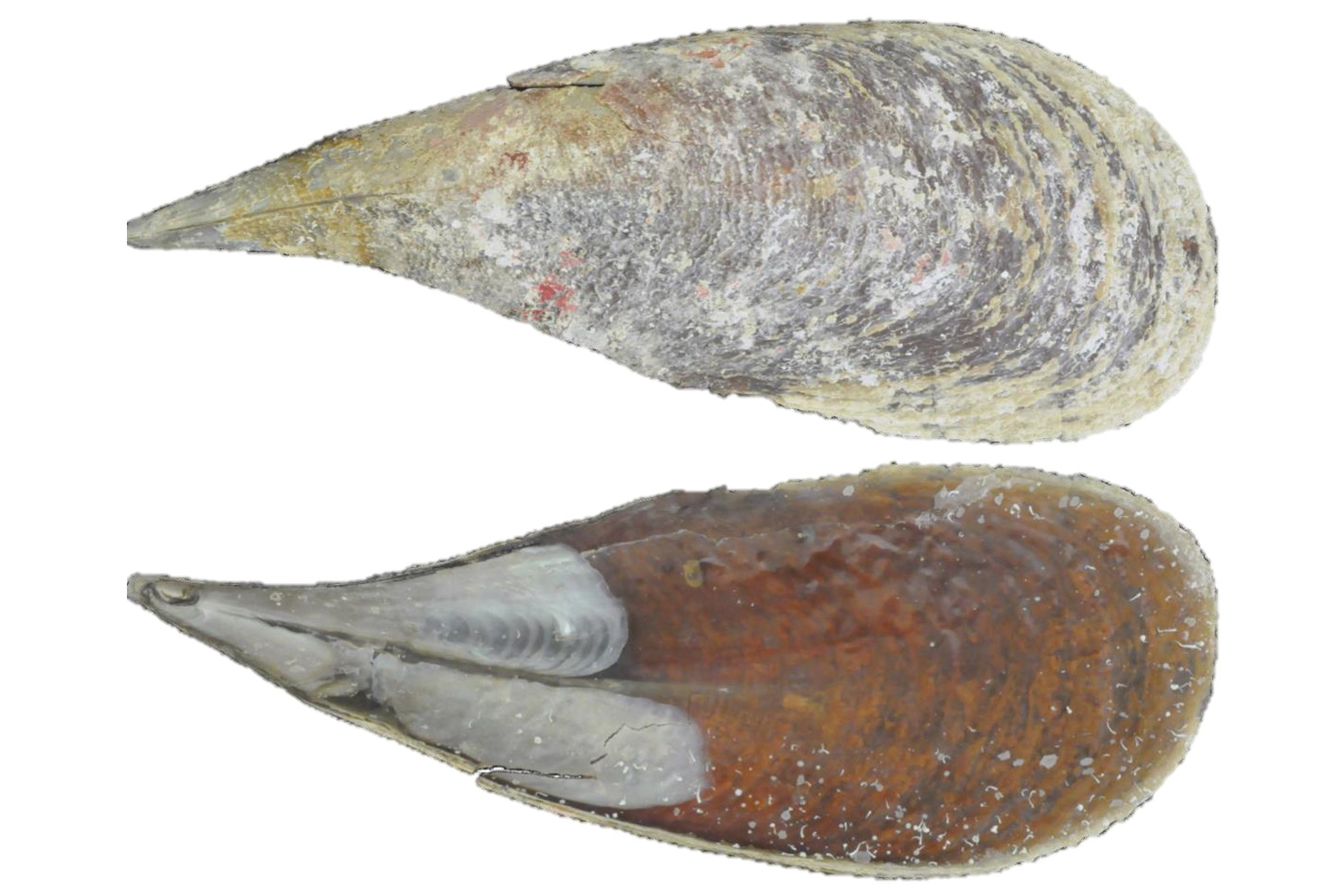 IMAGE:  A specimen of the pinna nobilis. Photo: Hovden Lab/University of Michigan

What’s more, if a crack does form, nacre confines the crack to a single layer rather than allowing it to spread, keeping the shell’s structure intact and enabling the mollusk to live another day.

“It’s incredible that a mollusk, which is not the most intelligent creature, is fabricating such complex structures across so many scales,” Hovden said. “It’s fabricating individual molecules of calcium carbonate, arranging them into nano-layered sheets that are glued together with organic material, all the way up to the structure of the shell, which combines nacre with several other materials.”

Hovden believes humans could use the mussel’s methods to create nano-engineered composite surfaces that could be dramatically lighter and tougher than those available today.

“Nature is handing us these highly optimized structures with millions of years of evolution behind them,” he said. We could never run enough computer simulations to come up with these—they’re just there for us to discover.”

The research was performed on electron microscopy instruments at the Michigan Center for Materials Characterization. The Mediterranean Pinna nobilis mollusk studied is a protected species due to recent ecological threats.