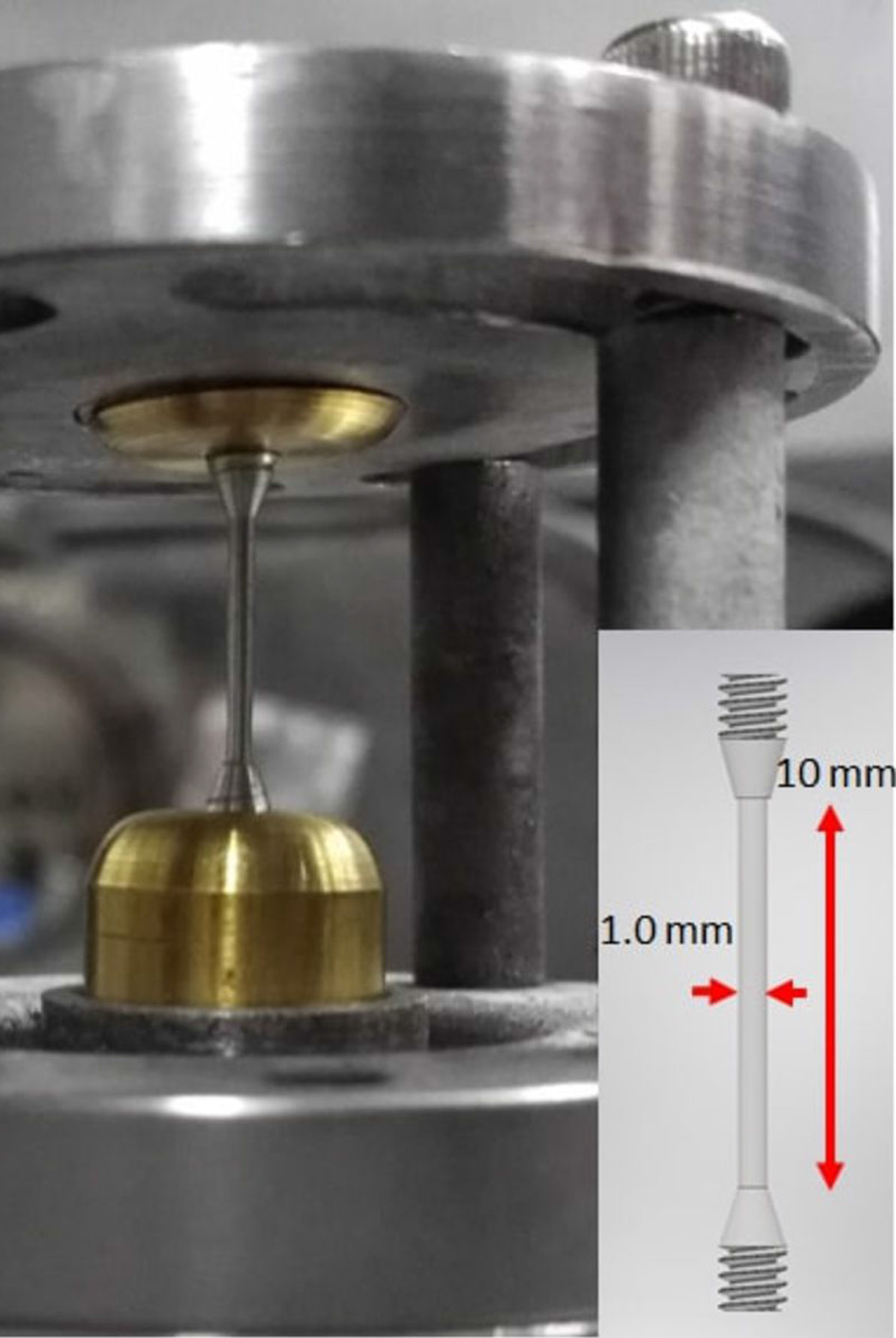 IMAGE:  A solid aluminum rod, 1.0 mm in diameter and 10 mm tall, installed between the positive and negative electrodes of the “MAIZE” pulsed-power facility at U-M. In a fusion experiment, this rod would be compressed toward its central axis by a powerful magnetic field in order to compress and heat fusion fuel contained inside. Credit: Plasma, Pulsed Power, and Microwave Laboratory, Michigan Engineering, courtesy of the American Institute of Physics.

Nuclear fusion energy is considered a “holy grail” of science. It releases more energy per pound of fuel than the atom-splitting nuclear power of today, it doesn’t produce long-lived radioactive waste, and there is a nearly limitless supply of fuel available in the Earth’s oceans (hydrogen). However, creating the high pressures and temperatures needed to ignite a self-sustaining fusion burn is so costly that it hasn’t yet been practical as an energy source. Researchers around the world are looking for ways to make fusion energy work.

There aren’t many problems in nuclear fusion that have cheap and easy solutions, but a team of researchers at U-M and the University of Rochester found one. Ryan McBride, an associate professor of nuclear engineering and radiological sciences and one of the senior authors on the article in Physics of Plasmas told the Michigan Engineer about how they used an aerosol polyurethane coating to stop rogue plasmas from ruining magnetic compression experiments.

Why does the magnetic compression of metal matter?

What exactly does this have to do with nuclear fusion?

There are concepts in nuclear fusion research that would generate fusion burns in discrete pulses, rather than a steady burn like we see in the sun. One way to do this is called magnetized liner inertial fusion, or MagLIF for short. In this scenario, a very fast and powerful magnetic field, generated by an enormous pulse of electrical current, is used to compress a cylindrical metal tube that is filled with fusion fuel, usually hydrogen. This concept generates fusion reactions by squeezing the fuel to almost the density of a solid while also heating the fuel to temperatures of about 50 million degrees Celsius.

How do you do magnetic compression for nuclear fusion?

The biggest and most powerful facility in the world for studying MagLIF is the Z facility at Sandia National Laboratories. It runs 25 million amperes of current through conducting materials in a pulse lasting just 100 billionths of a second. The Z facility stores electrical energy over several minutes and then releases this energy very quickly to generate over 80 trillion watts of electrical power. This is only possible because the energy is released in such a short burst—80 trillion watts is greater than the electrical power generating capacity of all the world’s power plants combined!

The Z facility is 33 meters in diameter, but we have a smaller, 3-meter version here at U-M. On our pulsed-power facility called MAIZE, we can deliver up to one million amperes of electrical current in about 100 billionths of a second—not enough to ignite nuclear fusion, but enough to explore some of the problems that crop up in fusion experiments at the Z facility. The problem we went after is the way that the metal of the cylinder containing the fusion fuel can expand and even jet outward.

Why is expansion and jetting a problem?

These problems, known collectively as ablation, create little clouds and jets of metal rising off the surface of the fuel-containing cylinder. This rising material can be quickly heated to the point that electrons are freed from their atoms—becoming a state of matter called plasma. Plasmas can clump up when conducting large electrical currents, which ruins the uniformity of the magnetic field used to compress the metal tubes—and the fuel inside. This can prevent fusion from occurring.

Ablation can also cause problems in other types of experiments that rely on magnetic compression. For example, material samples might not be uniformly compressed, radiation sources might not be as bright, and laboratory astrophysics experiments might not be good surrogates for the objects observed in space.

Additionally, metal electrodes conduct the electrical current pulse from the power generating equipment (electrical storage capacitors and high-power switches) to the experiment at the center of the machine. These power transmission electrodes also ablate due to the intense electrical currents. Under certain conditions, the ablated material can form a plasma that shorts out the device, causing any experiment to fail.

This problem is mitigated by increasing the distance between the electrodes, but this reduces the amount of power transmitted to the experiments. By tamping down ablated material, we can push the limits of magnetic compression experiments by moving the electrodes closer together.

IMAGE:  In the image on the left, a cloud of plasma rises from a sharp edge of an untreated aluminum rod. In the image on the right, the edge of a rod sprayed with polyurethane stays contained. Credit: Plasma, Pulsed Power, and Microwave Laboratory, Michigan Engineering, courtesy of the American Institute of Physics.

How have you solved it?

My colleagues at the University of Rochester came up with a simple technique to apply an aerosol polyurethane spray that can be purchased at any local hardware store. Polyurethane is an electrical insulator, so it’s not heated or accelerated by the magnetic field. However, it has enough inertia to prevent the metal from expanding outward. It serves as a mass tamper.

Others have used dielectric coatings before. However, the application process was quite involved, requiring material deposition and back-machining on a lathe, etc. We found that even with the easy spray-on application, the coating reduced the expansion of ablated material from metallic surfaces in intensely pulsed experiments. It also eliminated material jets from sharp metal corners.

What could this mean for the pursuit of fusion energy?

Often, irregularly shaped objects and/or objects with unsmooth surfaces (like those from 3D-printed objects) lead to more problems with ablated surface material and plasma formation. Thus, this technique could help mitigate these issues and enable the use of 3D-printed equipment, including 3D-printed power transmission electrodes. This could be particularly helpful in experiments where fast prototyping is desired for rapidly exploring alternative fusion concepts.

What are the other uses for magnetic compression experiments?

In material properties experiments, magnetic compression is applied to metallic “pushers” (which are sometimes cylindrical tubes, as in the fusion experiments, and sometimes planar sheets of metal). These pushers are used to compress material samples, and the material samples are studied as they are compressed. Some of the questions often asked are: How do material properties such as material strength, thermal conductivity, and electrical conductivity change under extreme compression? Where do various phase transitions occur as materials are compressed and heated?

In radiation-generating experiments, initially metallic objects are compressed to such extreme conditions that they begin to radiate profusely (mostly x-rays, but also neutrons if fusion fuel is being used).

In laboratory astrophysics experiments, metals are compressed, accelerated, and often turned into plasmas, which can then be used to mimic stellar phenomena, astrophysical plasma jets, accretion discs around massive astrophysical objects (like black holes), etc. 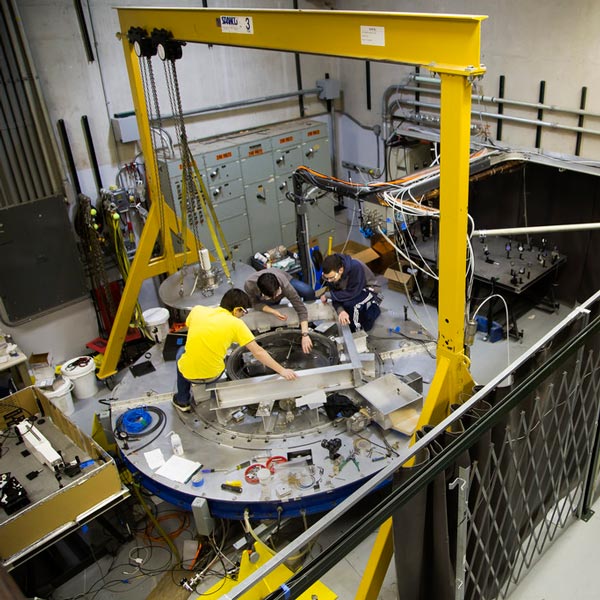 Nuclear energy and nuclear nonproliferation would both benefit from a faster, easier way to measure what proportion of uranium atoms can split.| Medium Read
Researchers