by Kate McAlpine
Michigan Engineering
May 2, 2018
Electron states in a semiconductor, set and changed with pulses of light, could be the 0 and 1 of future “lightwave” electronics or room-temperature quantum computers.| Medium Read
Enlarge 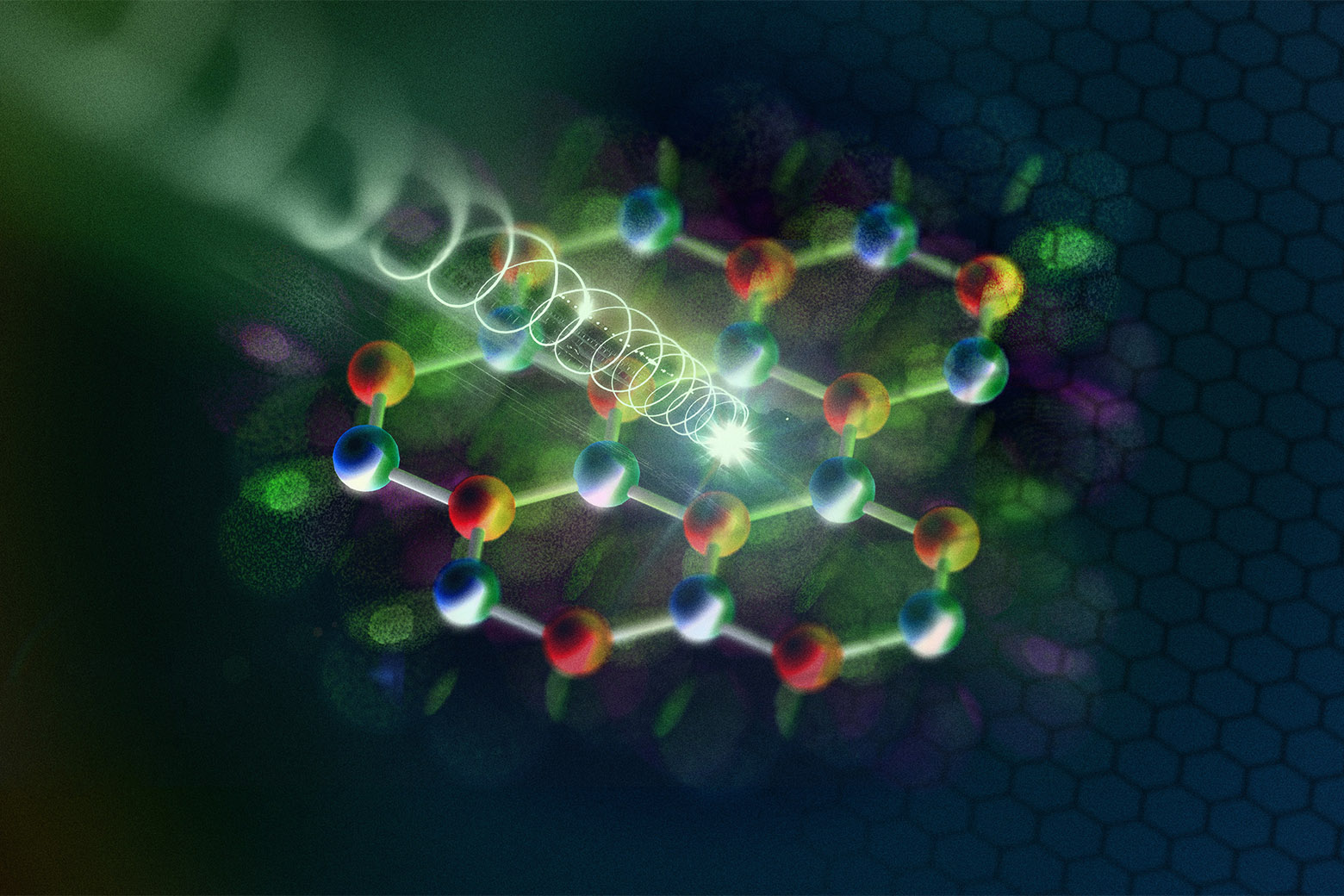 IMAGE:  An artist's rendering of a pulse of circularly polarized light hitting a 2-D semiconductor, putting the electrons into a pseudospin state that could store information as part of a new, faster computing technology. Credit: Stephen Alvey/Michigan Engineering

A technique to manipulate electrons with light could bring quantum computing up to room temperature. A team of researchers in Germany and at the University of Michigan have demonstrated how infrared laser pulses can shift electrons between two different states, the classic 1 and 0, in a thin sheet of semiconductor.

“Ordinary electronics are in the range of gigahertz, one billion operations per second. This method is a million times faster,” said Mackillo Kira, a professor of electrical engineering and computer science at U-M. He led the theoretical part of the study, to be published in the journal Nature, collaborating with physicists at the University of Marburg in Germany. The experiment was done at the University of Regensburg in Germany.

Quantum computing could solve problems that take too long on conventional computers, advancing areas such as artificial intelligence, weather forecasting and drug design. Quantum computers get their power from the way that their quantum-mechanical bits, or qubits, aren’t merely 1s or 0s, but they can be mixtures— known as superpositions—of these states.

“In a classical computer, each bit configuration must be stored and processed one by one while a set of qubits can ideally store and process all configurations with one run,” said Kira.

This means that when you want to look at a bunch of possible solutions to a problem and find the best fit, quantum computing can get you there a lot faster.

A visual explainer on lightwave valleytronics and the control of an electron's pseudospin, or valley state.

But qubits are hard to make because quantum states are extremely fragile. The main commercial route, pursued by companies such as Intel, IBM, Microsoft and D-Wave, uses superconducting circuits—loops of wire cooled to extremely cold temperatures (-321°F or less), at which the electrons stop colliding with each other and instead form shared quantum states through a phenomenon known as coherence. Rather than finding a way to hang onto a quantum state for a long time, the new study demonstrates a way to do the processing before the states fall apart.

“In the long run, we see a realistic chance of introducing quantum information devices that perform operations faster than a single oscillation of a lightwave,” said Rupert Huber, a professor of physics at the University of Regensburg, who led the experiment. “The material is relatively easy to make, it works in room temperature air, and at just a few atoms thick, it is maximally compact.”

“Ordinary electronics are in the range of gigahertz, one billion operations per second. This method is a million times faster.”Mackillo Kira, EECS
Tweet

The material is a single layer of tungsten and selenium in a honeycomb lattice. This structure produces a pair of electron states known as pseudospins. It’s not the spin of the electron (and even then, physicists caution that electrons are not actually spinning), but it is a sort of angular momentum. These two pseudospins can encode the 1 and 0.

Huber’s team prodded electrons into these states with quick pulses of infrared light, lasting just a few femtoseconds (quintillionths of a second). The initial pulse has its own spin, known as circular polarization, that sends electrons into one pseudospin state. Then, pulses of light that don’t have a spin (linearly polarized) can push the electrons from one pseudospin to the other—and back again.

By treating these states as ordinary 1 and 0, it could be possible to create a new kind of “lightwave” computer with the million-times-faster clock speeds that Kira mentioned. The first challenge along this route will be to use a train of laser pulses to “flip” the pseudospins at will.

But the electrons can also form superposition states between the two pseudospins. With a series of pulses, it should be possible to carry out calculations until the electrons fall out of their coherent state. The team showed that they could flip a qubit quickly enough to execute a string of operations—basically, it’s fast enough to work in a quantum processor.

Moreover, the electrons are constantly sending out light that makes it easy to read a qubit without disturbing its delicate quantum state. Clockwise circular polarization indicates one pseudospin state, counterclockwise the other. The next steps toward quantum computing will be to get two qubits going at once, near enough to one another that they interact. This could involve stacking the flat sheets of semiconductor or using nanostructuring techniques to fence off qubits within a single sheet, for example.

The research is described in a paper titled, “Lightwave valleytronics in a monolayer of tungsten diselenide.”

The study was funded by the European Research Council and the German Research Foundation.