‘Missing lead’ in Flint water pipes confirms cause of crisis 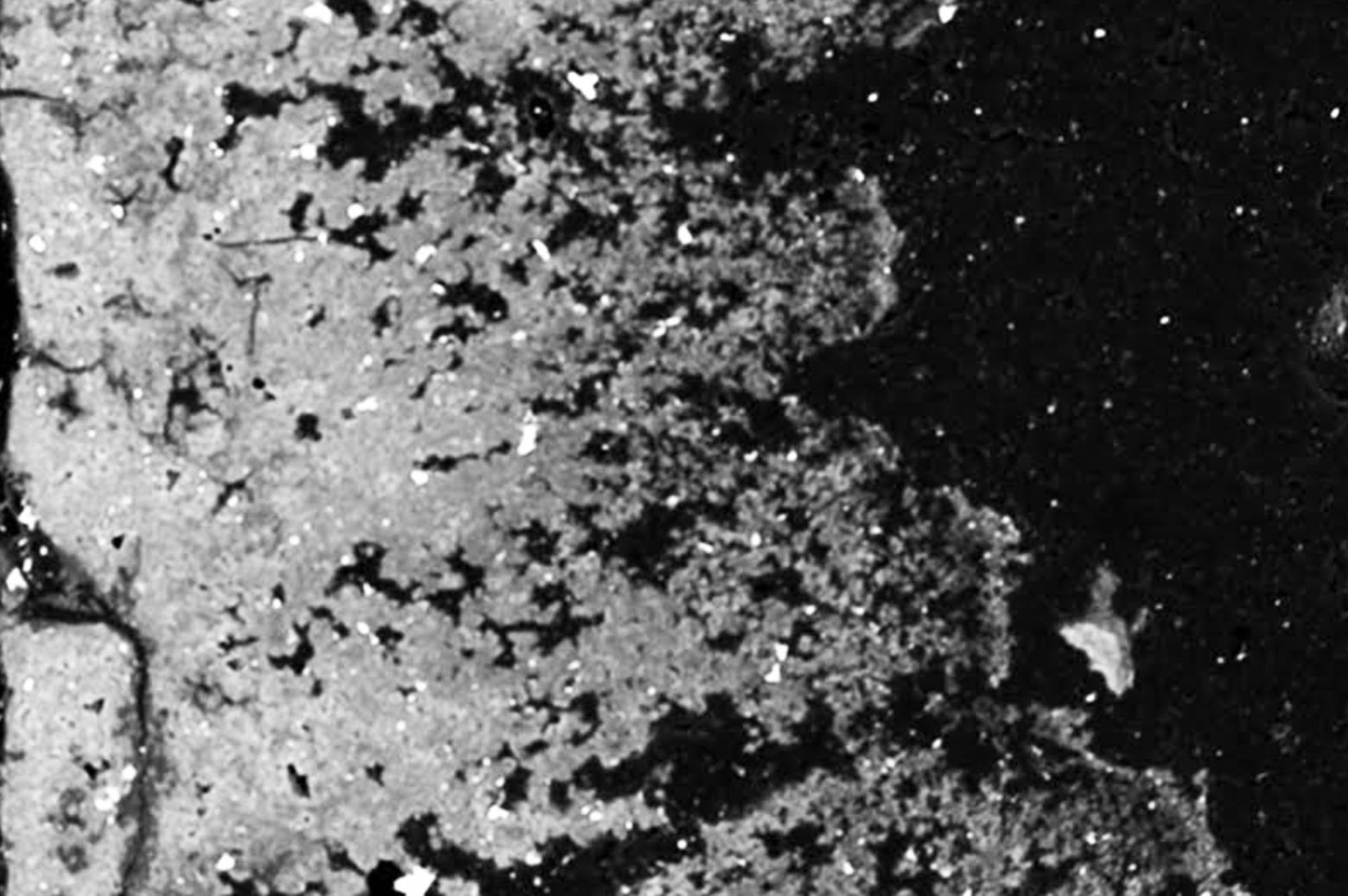 IMAGE:  Backscattered electron images of a cross-section of the layer of metal scale, or rust, inside pipe samples from lead service lines in Flint, Michigan. The outside of the pipe is on the left side, and the holes in the “Swiss cheese pattern” are voids where the lead used to be, say researchers at the University of Michigan College of Engineering. Untreated, corrosive water caused the lead to leach out, leaving behind a mineral skeleton of aluminum and magnesium. Credit: Brian Ellis

A study of lead service lines in Flint’s damaged drinking water system reveals a Swiss cheese pattern in the pipes’ interior crust, with holes where the lead used to be.

The findings—led by researchers at the University of Michigan—support the generally accepted understanding that lead leached into the system because that water wasn’t treated to prevent corrosion. While previous studies had pointed to this mechanism, this is the first direct evidence. It contradicts a regulator’s claim earlier this year that corrosion control chemicals would not have prevented the water crisis. 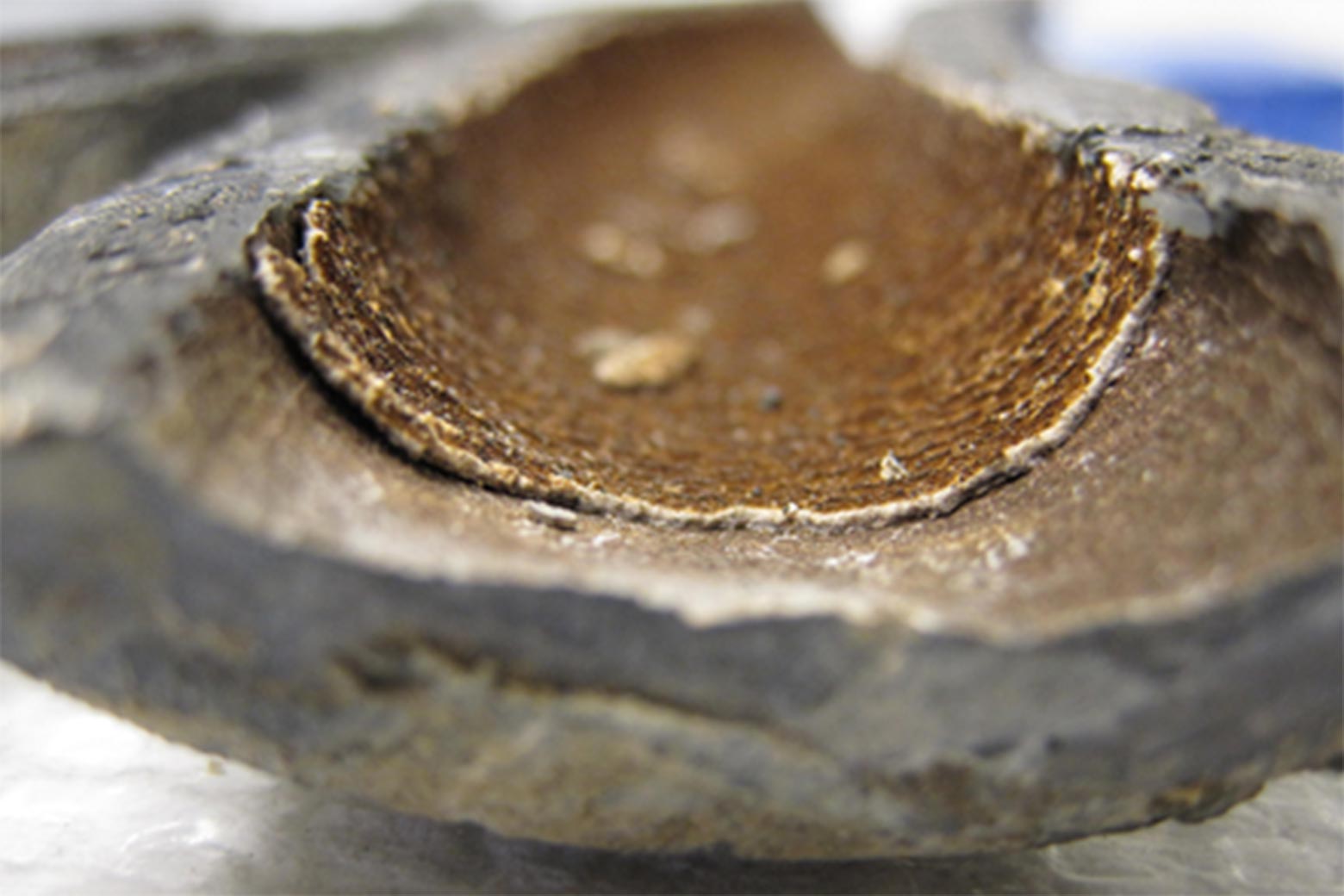 IMAGE:  Inside a Flint lead service line. University of Michigan researchers have closely examined the rust layer to confirm that the cause of the water crisis was, indeed, a lack of corrosion-controlling chemicals in the water. Courtesy of Terese Olson.

Researchers say the findings underscore how important uninterrupted anti-corrosion treatment is for the aging water systems that serve millions of American homes.

The team focused on the layer of metal scale—essentially lead rust—inside 10 lead service line samples from around Flint. They studied the texture of the rust layer, as well as its chemical composition. Then they used their analysis to estimate that the average lead service line released 18 grams of lead during the 17 months that Flint river water (without corrosion control) flowed through the system.

“This is the amount of lead that would have entered a single home,” said Terese Olson, a U-M associate professor of civil and environmental engineering and the lead author of a paper in Environmental Science and Technology Letters. “If we average that release over the entire period the city received Flint River water, it would suggest that on average, the lead concentration would be at least twice the EPA action level of 15 parts per billion.”

The lead ended up in several places. “Some was consumed,” Olson said. “Some washed down the drain. Some might still be stored in the homes’ plumbing. In other words, there is a chance that some of that lead is a potential health risk even after the lead service line is removed.”

If a lead service line connects to a home with galvanized steel pipes, for example, those pipes can act as lead sponges that can hold and then later release particles containing the toxic metal, said Brian Ellis, an assistant professor of civil and environmental engineering and an author of the paper.

Small changes in water chemistry can release what was stable lead in a fairly quick pulse.@UM_CEE's Brian Ellis
Tweet

In addition to examining pipe samples under a scanning electron microscope, the researchers pulverized the pipe linings to analyze what they’re made of. In the Flint pipes, they found a greater ratio of aluminum and magnesium to lead than is typical for lead service lines, when compared with data from 26 other water utilities.

“We estimated how much lead was ‘missing’ in order to bring the Flint lead scale into line with the amount of aluminum and magnesium that was reported in other communities,” Olson said. “That missing lead represents what was leached from the pipes during the Flint corrosion episode.”

As lead pipes age, the atoms on their surface react with oxygen and other chemicals in the system and become oxidized, or rusted. Adequate water treatment doesn’t prevent that process. What it does prevent, though, is the breakdown of the rust layer. 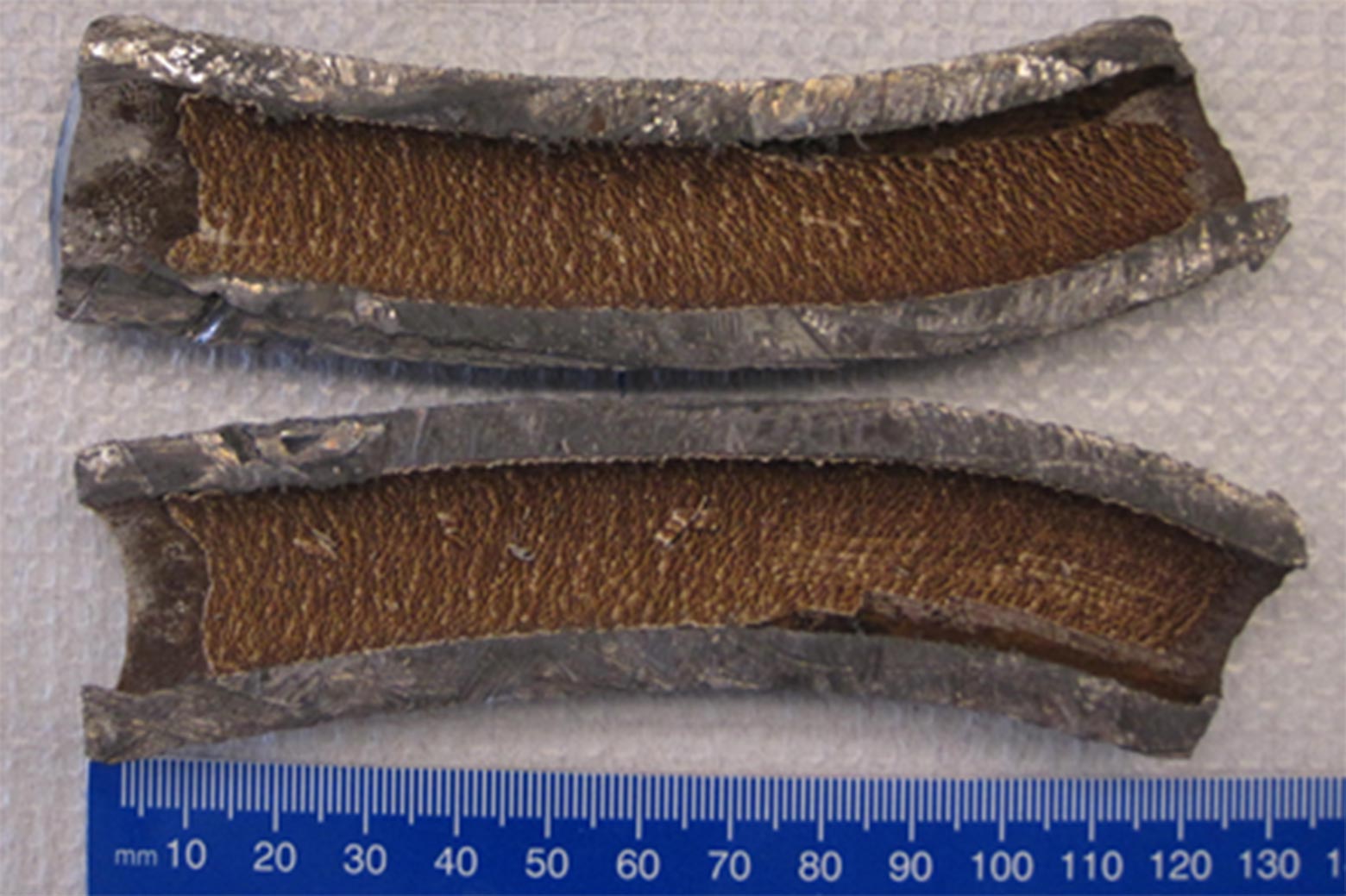 IMAGE:  Inside a Flint lead service line. University of Michigan researchers have closely examined the rust layer to confirm that the cause of the water crisis was, indeed, a lack of corrosion-controlling chemicals in the water. Courtesy of Terese Olson.

“It’s like when you put an old penny in a glass of Coke and watch it get shiny again,” Ellis said. “The acid in the Coke dissolves the copper corrosion product. This is similar to what happened in Flint’s lines. You can have a stable corrosion product, but when you change the water chemistry the oxidized lead compounds on the surface may become unstable and readily dissolve.”

Water utilities with both corrosive water and lead service lines in their systems add compounds called orthophosphates to prevent that breakdown. When Flint switched from Lake Huron water to the more corrosive Flint River to save money, the utility didn’t adjust its treatment process by adding orthophosphates.

“Beyond implications for Flint, we demonstrated that small changes in water chemistry can release what was stable lead in a fairly quick pulse,” Ellis said. “This is a known condition. So while we weren’t surprised, being able to show it underscores the importance of maintaining uninterrupted lead corrosion control.”

The authors hope to verify their prediction of the amount of lead released by analyzing a lead service line from a vacant home that was not exposed to the corrosive Flint water. The challenge is to find a home that has had its water turned off since 2014 and has a lead service line that can be dug up. 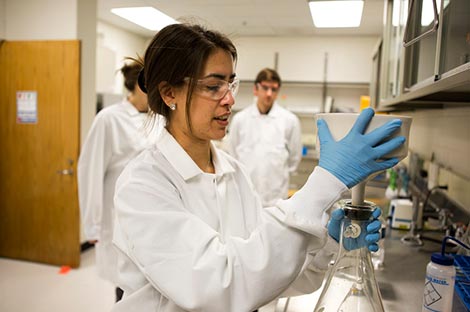 We don't know much about how coronaviruses move through the environment. U-M and Stanford engineers aim to change that.| Medium Read 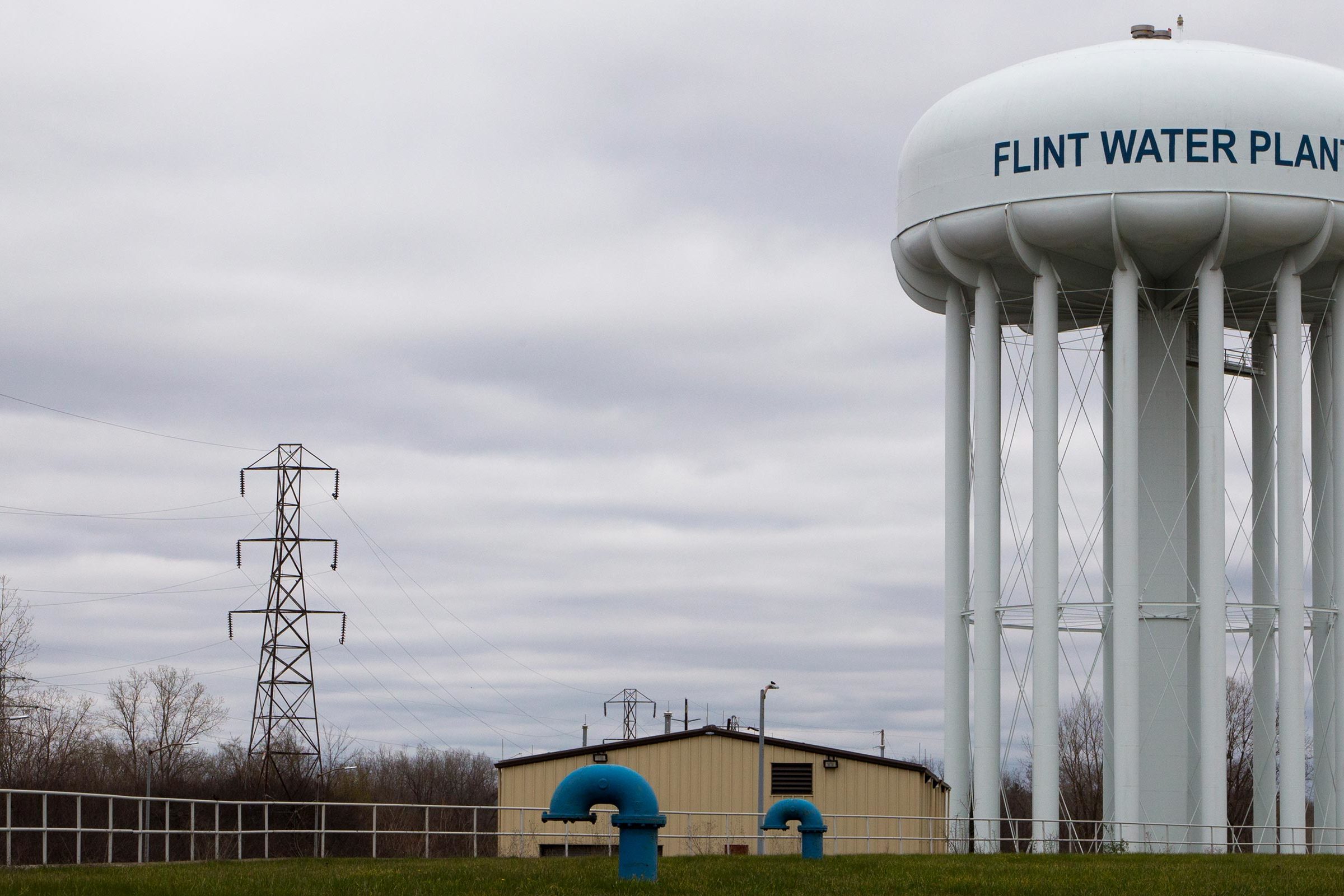 Researchers from the University of Michigan, Wayne State University and Michigan State University are conducting studies that are expected to provide additional guidance about the use of filters in Flint.| Medium Read
Researchers
In the News
In the NewsAug 2, 2017
Study confirms how lead got into Flint’s water
Michigan RadioJul 31, 2017
New UM research confirms generally understood aspect of Flint water crisis
In the NewsJul 28, 2017
‘Swiss cheese pattern’ confirms cause of Flint water crisis
MLive.comJul 28, 2017
Missing lead caused ‘Swiss cheese pattern’ in Flint pipes, study says