In a breakthrough that could one day lead to new treatments for lung diseases like asthma and lung cancer, researchers have successfully coaxed stem cells—the body’s master cells—to grow into three-dimensional lung tissue. This could be useful in future cell-based therapies that repair damaged lungs by cultivating new, healthy tissue.

University of Michigan researchers grew the tissue by injecting stem cells into a specially developed biodegradable scaffold, then implanting the device in mice, where the cells grew and matured into lung tissue. The team’s findings were published in the Nov. 1 issue of the journal eLife. 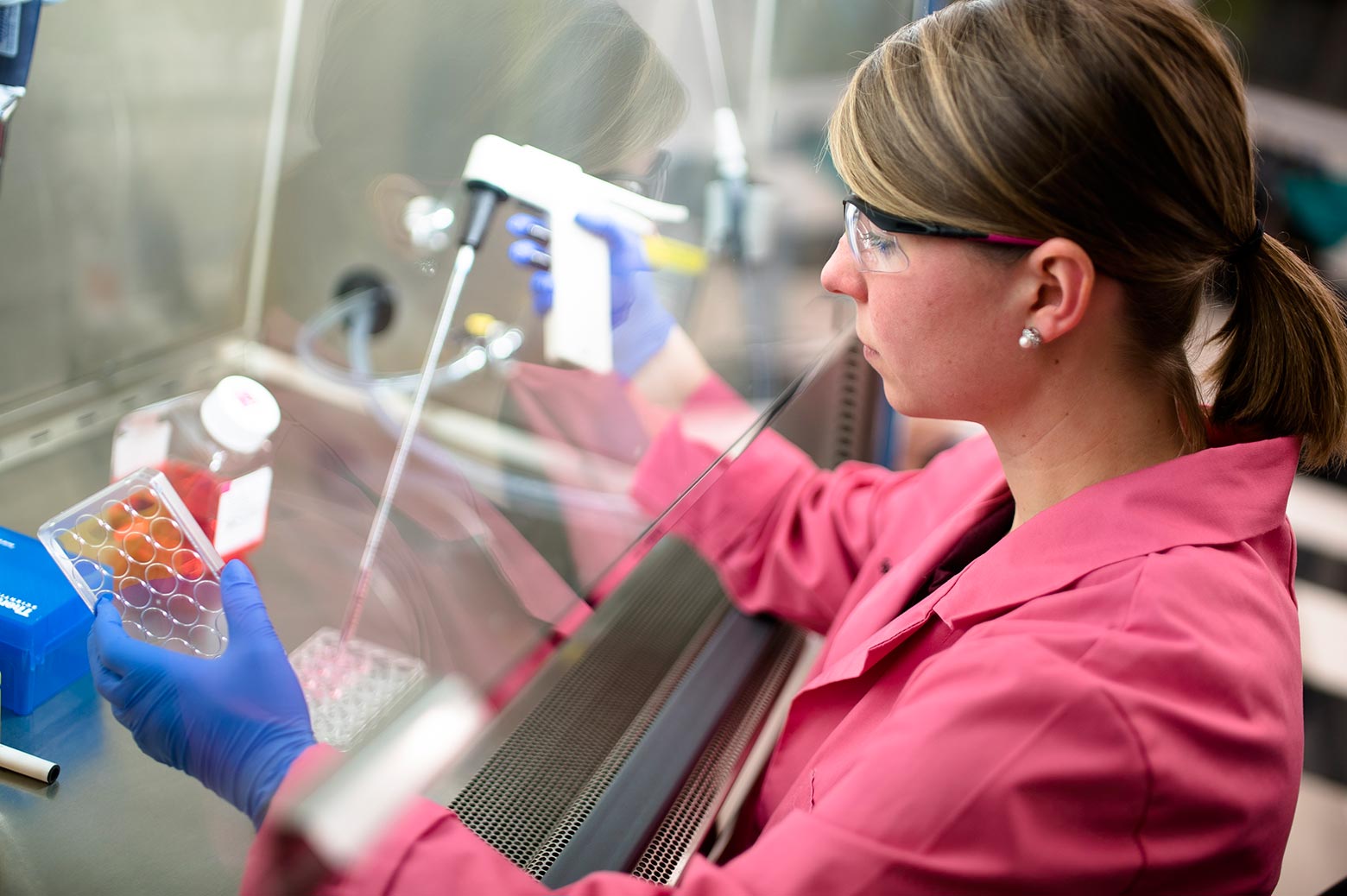 Respiratory diseases account for nearly 1 in 5 deaths worldwide, and lung cancer survival rates remain low despite numerous therapeutic advances during the past 30 years. Cell-based therapies could be a key to improving treatment, helping damaged lungs heal in much the same way as a bone marrow transplant can treat leukemia. But the complexity of lung tissue makes such treatments much more difficult to develop.

“Lung tissue needs to be able to form into specific structures like airways and bronchi, and they all need to be able to work together inside the lung. So we can’t just add in healthy adult cells,” said Lonnie Shea, the William and Valerie Hall Department Chair of Biomedical Engineering and a professor of biomedical engineering at U-M. “Instead, we’re looking at delivering the precursors to these cells, then giving them the cues they need to develop and mature on their own. This project was a step in that direction.”

While previous experiments had successfully grown lung cells, the cells were immature and disorganized. So Shea worked with a U-M medical school team led by Briana Dye, a graduate student in the U-M Department of Cell and Developmental Biology, on a new approach. They developed a three-dimensional, biodegradable scaffold that helped the lung cells mature and begin to develop into structures like those inside an actual lung.

Made of PLG, a spongy, biodegradable material, the scaffold was shaped like a small cylinder approximately five millimeters wide and two millimeters tall. The team injected stem cells into the scaffold, transplanted it into mice, then allowed the cells to mature for eight weeks.

The scaffold provided a stiff structure that supported growth of the mini lungs after transplantation while still allowing the transplanted tissue to become vascularized, growing blood vessels that supplied it with nutrients.

“In many ways, the tissue grown in the study was indistinguishable from human adult tissue,” says senior study author Jason Spence, Ph.D., associate professor in the U-M Department of Internal Medicine and the Department of Cell and Developmental Biology at the U-M Medical School.

The researchers caution that they’re far from growing anything like a complete human lung—the tissue grown in the experiment was a mass of lung cells scattered among other types of cells inside the scaffold. But they say it’s an important early step that can yield valuable information about how healthy cells grow and develop. In the future, that could lead to new treatments for lung disease. 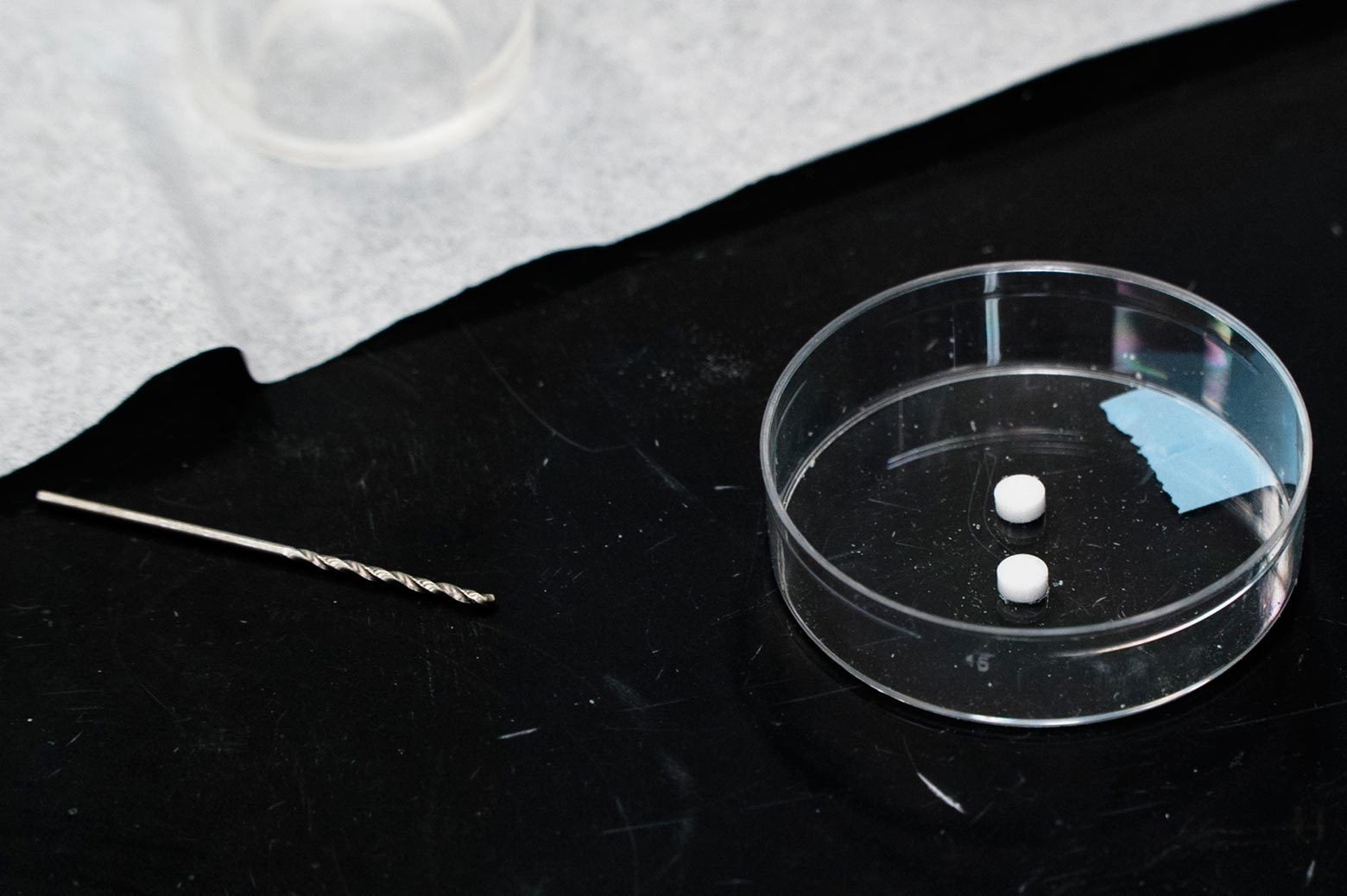 IMAGE:  Richard Youngblood, a second year PhD student in Biomedical Engineering at the University of Michigan, demonstrates the construction of a lung organoid PLG scaffold. This research was conducted partly in the lab of Lonnie Shea, the William and Valerie Hall Department Chair and Professor of Biomedical Engineering. Photo: Evan Dougherty, Michigan Engineering Communications & Marketing

“What if we could regrow a portion of a damaged lung, like a patch?” Shea said. “Treatments like that, while challenging, may be possible.”

The lung tissue is one of several types of cultured organ tissue, or “organoids” that U-M research teams have developed—other cell types they’ve created include intestines, pancreatic cells and placenta cells. In addition to their uses in developing new cell-based therapy, Shea says the cells can provide a human model for screening drugs, studying gene function, generating transplantable tissue and studying complex human diseases like asthma.

“Organoids enable us to see the development and formation of an organ without having to conduct a test on an entire organism. And once we understand that, we can find new ways of repairing organs that are injured, or that haven’t developed properly.”

The paper is titled “A bioengineered niche promotes in vivo engraftment and maturation of pluripotent stem cell derived human lung organoids.” The research was supported by the National Institutes of Health (grant number R01 HL119215), by the NIH Cellular and Molecular Biology training grant at Michigan and by the U-M Tissue Engineering and Regeneration Training Grant.