Methane leaks: A new way to find and fix in real time 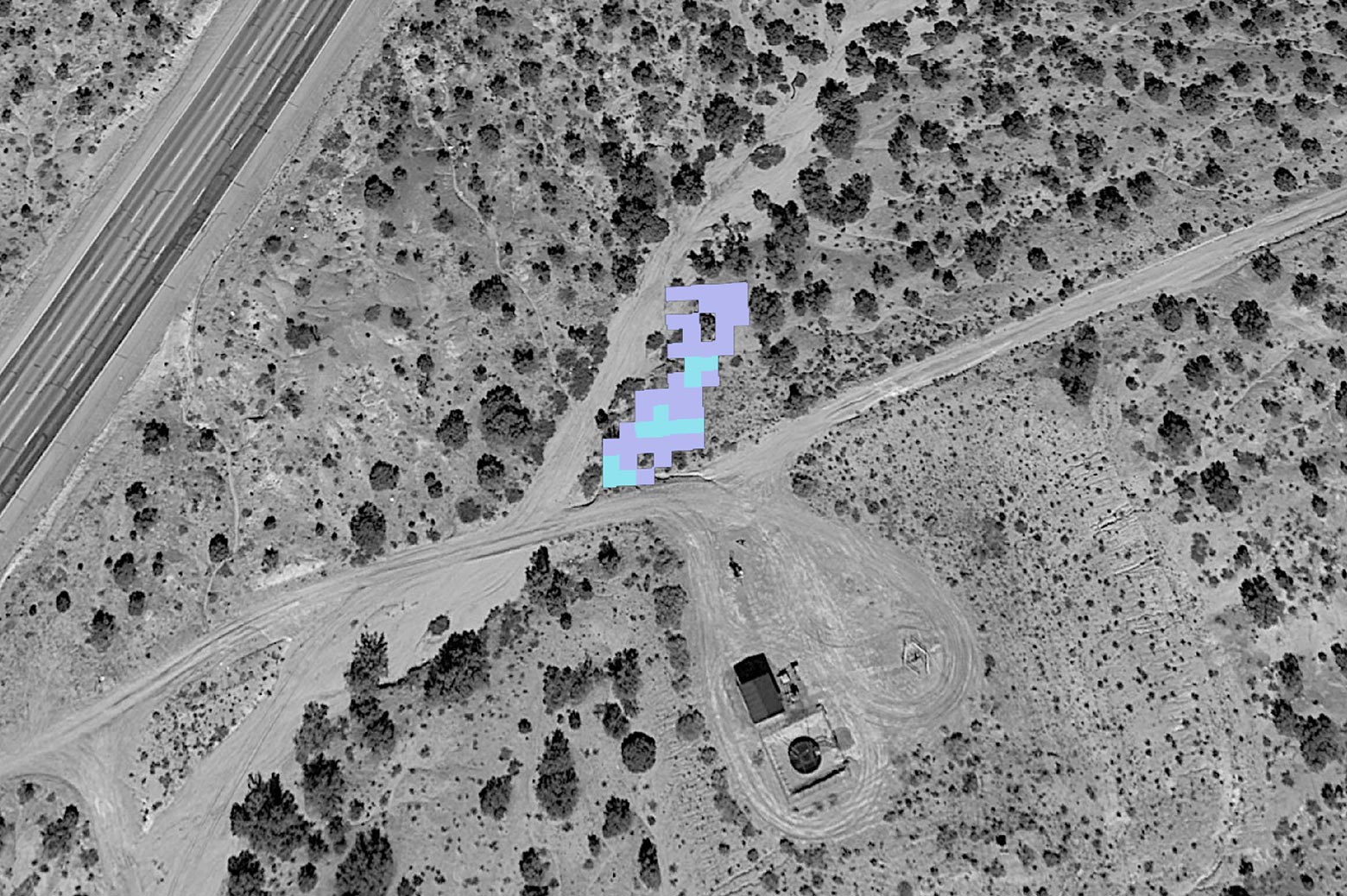 IMAGE:  Aerial view of a plume of methane leaking from an underground pipeline, as seen with the help of a unique imaging spectrometer that operates like a near-infrared camera. A research team was able to identify this leak from the air, verify it on the ground, and it was immediately fixed. Colors represent parts of methane per million by volume, with blue representing 1,750 ppm and purple 1,250 ppm. Christian Frankenberg

Researchers have flown aircraft over an oil and gas field and pinpointed – with unprecedented precision – sources of the greenhouse gas methane in real time.

The technique led to the detection and immediate repair of two leaks in natural gas pipelines in the Four Corners region of the U.S. Southwest. The approach could inform strategies for meeting new federal limits on methane emissions from the oil and gas industry. Methane emissions have spiked in recent decades along with the boom in natural gas drilling.

“If there’s a desire to identify and address the largest methane emitters, our approach provides a way to do that. The method shows that you can easily fly over an area and actually see the plumes in real time,” said Eric Kort, assistant professor of climate and space sciences and engineering at the University of Michigan and co-author on a paper about the researched published in the xx edition of PNAS.

Kort collaborated on deploying the new approach, which was developed by Christian Frankenberg of NASA’s Jet Propulsion Laboratory and the California Institute of Technology. The overall project is led by the National Oceanic and Atmospheric Administration.

The team previously used satellite measurements to identify the Four Corners region as a hotbed for methane emissions. The new work builds on the previous finding by zooming in on the region with enough detail to pinpoint individual methane plumes instead of giving an averaged view for an area many miles wide.

Methane is the primary component of natural gas, but when it’s released directly into the air, it’s a potent greenhouse agent that plays a role in warming the planet. The Obama administration has set targets of cutting methane emissions by up to 45 percent of 2012 levels by 2025. In May, the EPA released the first round of regulations. To meet the goals, however, the sources of so-called fugitive methane emissions must be found.

For a long time, there’s been a discrepancy between methane levels measured from point sources on the ground, and levels measured higher in the atmosphere, said co-author Colm Sweeney, a scientist with NOAA’s Cooperative Institute for Research in Environmental Sciences. The atmosphere holds stores of the gas whose sources on the ground are difficult to locate. This new detection technique can help locate them. The pipeline leaks it identified are a good example of how. Operators can’t always know where a pipeline may be leaking, and pipelines can be hard to access for testing from the ground. 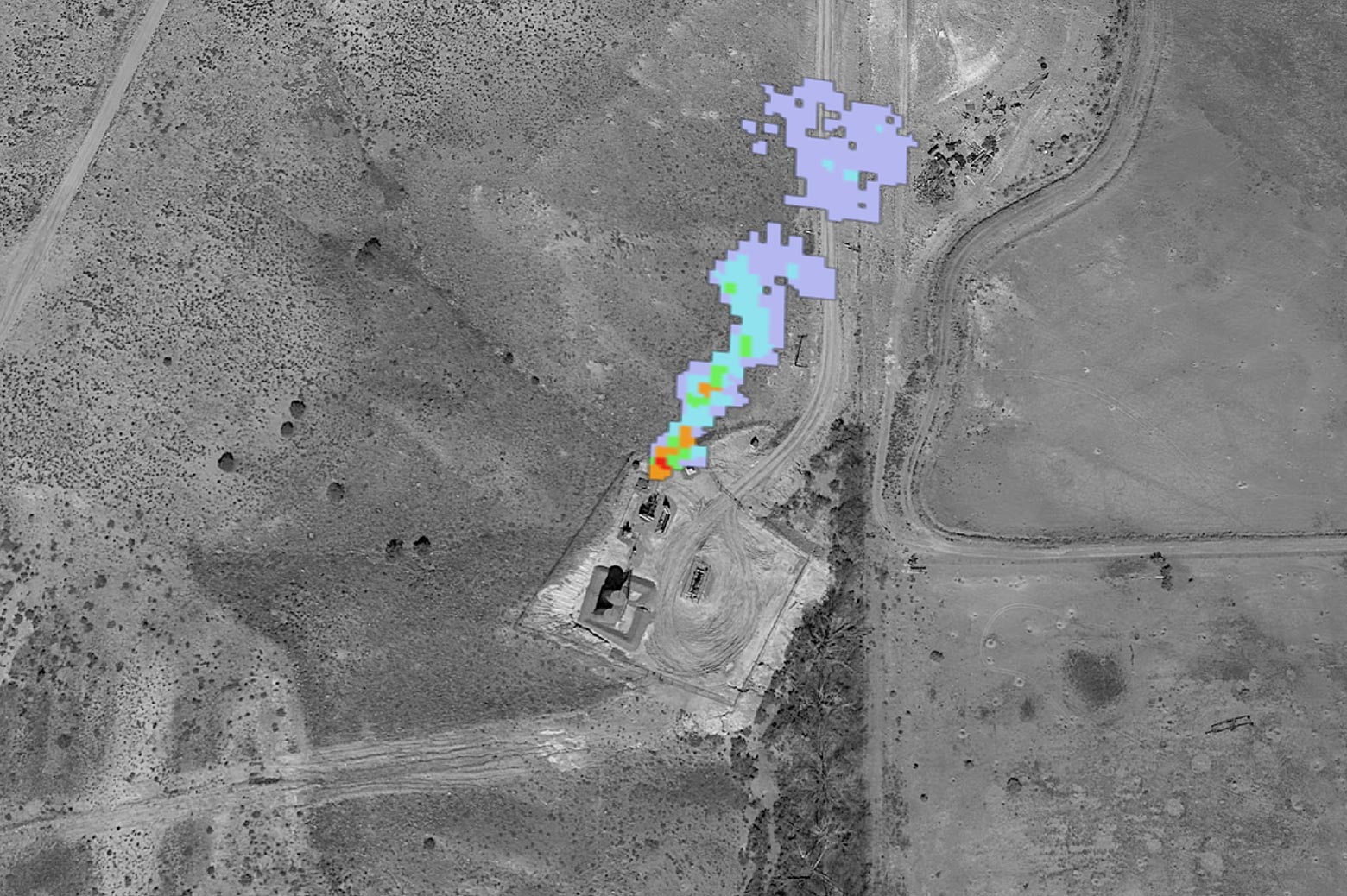 IMAGE:  Aerial view of a plume of methane seeping from a storage tank, as seen with the help of a unique imaging spectrometer that operates like a near-infrared camera. Colors represent parts of methane per million by volume, with red representing 6,000 ppm and purple 1,250 ppm. Christian Frankenberg

All told, the team identified 250 methane plumes emanating from natural gas processing facilities, storage tanks, well pads, pipeline leaks, a coal mine venting shaft and natural sources. Not all of these plumes can be mitigated, the researchers say. Although some represent leaks, others result from relatively unavoidable losses. Still others illuminate instances where an energy company has focussed on capturing a different resource, such as oil, and loses some of the natural gas that was buried with it. And the coal mine venting shaft is necessary to protect miners from explosions.

To conduct the research, the team flew two specially instrumented Twin Otter aircraft over a 1,900-square-mile area where Arizona, New Mexico, Colorado and Utah meet. Each aircraft carried a unique imaging spectrometer that operates a bit like an infrared camera. One imaged at near-infrared wavelengths and the other at thermal wavelengths. Two additional NOAA program aircraft flew low over and around the larger sources measuring the concentration of methane in the plumes as calibration points for the NASA remote measurements.

Statistical analysis showed that 10 percent of the methane sources the researchers identified were responsible for more than half of the observed point-source emissions in the region. This analysis confirmed the so-called “fat” or “heavy” tail statistical distribution they expected to see.

“A relatively small number of sources emit a disproportionate share of emissions,” Kort said. “As far as we know, this is the first direct observation of this heavy tail distribution of sources over an entire basin.”

The pattern is common in both nature and human behavior, explained JPL’s Frankenberg. “Take earthquakes, for instance. A lot of smaller earthquakes are happening all the time and you don’t even feel them. What actually matters are the few big ones.”

Kort said a satellite could possibly be designed to detect methane plumes in this way.

The paper is called “Airborne remote measurements of fat-tail methane emitters in the Four Corners region.” The research was funded by NOAA and NASA. NOAA’s Cooperative Institute for Research in Environmental Sciences is located at the University of Colorado Boulder.

Take a multimedia trip to the Amazon and meet the researchers who are working to understand how the future of the rainforest could affect us all.| Short Read
Researchers
In the News
ScienceDec 21, 2016
Why is atmospheric methane surging? (Hint: It’s not fracking)
Scientific AmericanOct 6, 2016
Industry gas leaks improve