by Gabe Cherry
Michigan Engineering
April 19, 2016
In an entirely new approach to treating asthma and allergies, a biodegradable nanoparticle acts like a Trojan horse, hiding an allergen in a friendly shell to convince the immune system not to attack it.| Short Read
Enlarge 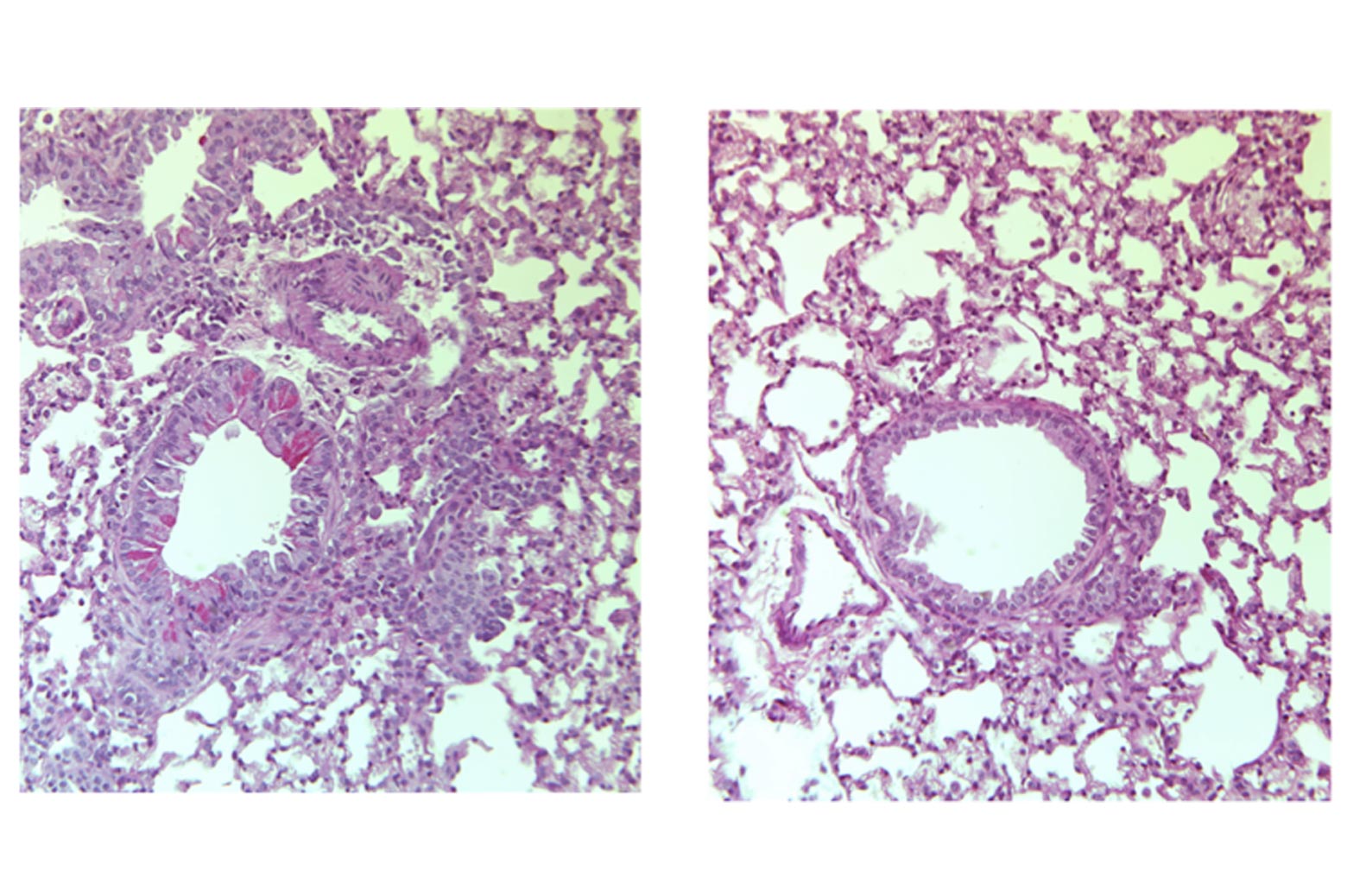 IMAGE:  Microscope photos of mouse lung cells, with red areas indicating inflammation. The cells on the left, treated with the allergen-loaded Trojan horse nanoparticle, show significantly less inflammation than the untreated cells on the right.

In an entirely new approach to treating asthma and allergies, a biodegradable nanoparticle acts like a Trojan horse, hiding an allergen in a friendly shell to convince the immune system not to attack it, according to new research involving a Michigan Engineering professor. As a result, the immune system is trained not to respond to the allergens, reducing or eliminating allergic responses like asthma attacks.

The technology, whose development resulted from a collaboration between University of Michigan and Northwestern University researchers, can be applied to food allergies as well. The nanoparticle is currently being tested in a mouse model of peanut allergy, similar to food allergy in humans.

“Small quantities of allergen have been used to de-sensitize patients,” said Lonnie Shea, the William and Valerie Hall Chair and Professor of Biomedical Engineering at U-M and co-senior author on the manuscript. “Delivering the allergen using emerging nanotechnologies can provide a more efficient and effective system.”

It’s the first time this method for creating tolerance in the immune system has been used in allergies.

“The findings represent a novel, safe and effective long-term way to treat and potentially ‘cure’ patients with life-threatening respiratory and food allergies,” said co-senior author Stephen Miller, the Judy Gugenheim Research Professor of Microbiology-Immunology at Northwestern University Feinberg School of Medicine. “This may eliminate the need for lifelong use of medications to treat lung allergy.”

The asthma allergy study was in mice and the mice showed a significantly reduced allergic reaction after two doses of the Trojan horse nanoparticle.

The approach has been used in autoimmune diseases including multiple sclerosis and celiac disease in previous preclinical research at Northwestern and U-M. A clinical trial using the nanoparticles to treat celiac disease is in development. The technology is progressing to clinical trials in autoimmune disease as well.The nanoparticle technology is being developed commercially by Cour Pharmaceuticals Development Co.

A paper on the findings was published April 18 in the Proceedings of the National Academy of Sciences.

“It’s a universal treatment,” Miller said. “Depending on what allergy you want to eliminate, you can load up the nanoparticle with ragweed pollen or a peanut protein.”

The nanoparticles are composed of an FDA-approved biodegradable polymer called PLGA, which is the same material used in biodegradable sutures and degrades to the normal metabolites lactic acid and glycolic acid.

When the allergen-loaded nanoparticle is injected into the bloodstream of mice, the immune system isn’t concerned with it because it sees the particle as innocuous debris. Then the nanoparticle and its hidden cargo are consumed by a macrophage, essentially a vacuum-cleaner cell.

The allergen, in this case egg protein, was administered into the lungs of mice who have been pretreated to be allergic to the protein and already had antibodies in their blood against it. So when they were re-exposed to it, they responded with an allergic response like asthma. After being treated with the nanoparticle, they no longer had an allergic response to the allergen.

The approach also has a second benefit. It creates a more normal, balanced immune system by increasing the number of regulatory T cells, immune cells important for recognizing the airway allergens as normal. This method turns off the dangerous Th2 T cell that causes the allergy and expands the good, calming regulatory T cells.

Adapted from a story from Northwestern University.