New voting options, a contentious race and a global pandemic have turned the 2020 presidential race into an election unlike any other in modern memory. Where, when and how to vote is a complicated, individual decision that depends on how votes are counted in your state, your risk factors for COVID and a variety of other variables.

We recently sat down with J. Alex Halderman, a University of Michigan professor of electrical engineering and computer science and one of the nation’s foremost experts on election security. He offered tips that can help Americans make sure their votes are recorded accurately and securely. 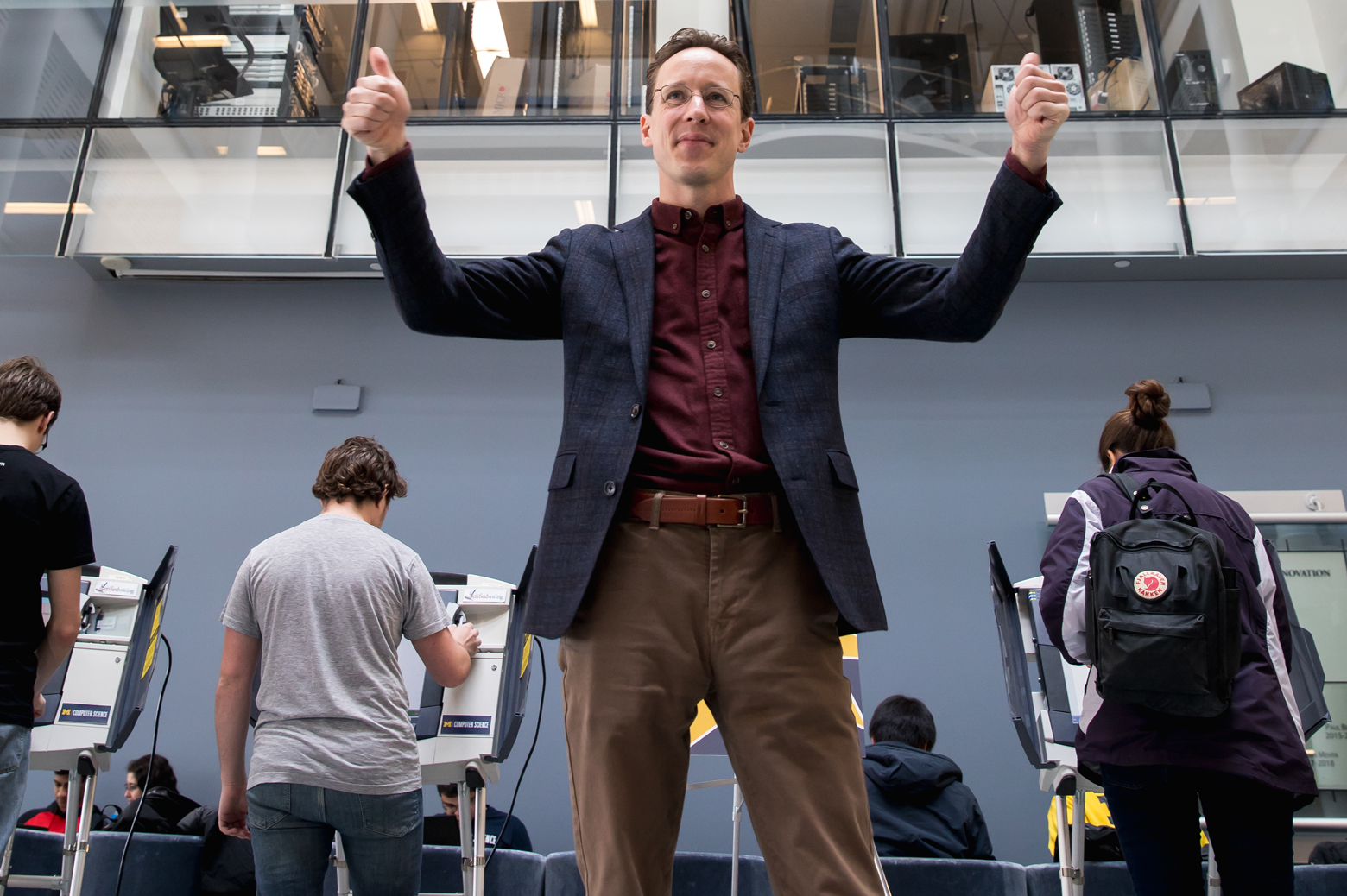 IMAGE:  In 2018, Halderman held an election demonstration for the New York Times. The experiment showed how susceptible voting machines are to hacking, and how paper ballots are much more reliable. Photo: Levi Hutmacher/Michigan Engineering

1.   Avoid voting methods that don’t have a paper trail

“States have made a lot of progress in decommissioning completely paperless voting machines, but around 15% of the electorate will still vote paperlessly in November,” Halderman said. “If you’re one of those voters, you might consider voting by mail. That will create a paper record of your vote that can be recounted.”

2.   If you use a ballot marking device at the polls, review your printout to make sure it’s correct

Ballot- marking devices are machines—usually touch screens—where voters fill out their ballot electronically and then get a printout of their vote that’s scanned by a computer.

They’re very helpful for people who are unable to complete a hand-marked ballot. But some jurisdictions have begun using ballot marking devices for every voter.

“The problem with every voter using ballot-marking devices is that an attacker could compromise them and program them to produce ballots that don’t reflect the voters’ choices,” Halderman said. “A study I did last summer showed that almost 95% of voters don’t review their printouts closely enough to make sure they’re correct.”

Luckily, voters can be a part of the solution. If you vote using a ballot marking device, scrutinize the printout , and tell a poll worker if any selection isn’t right. 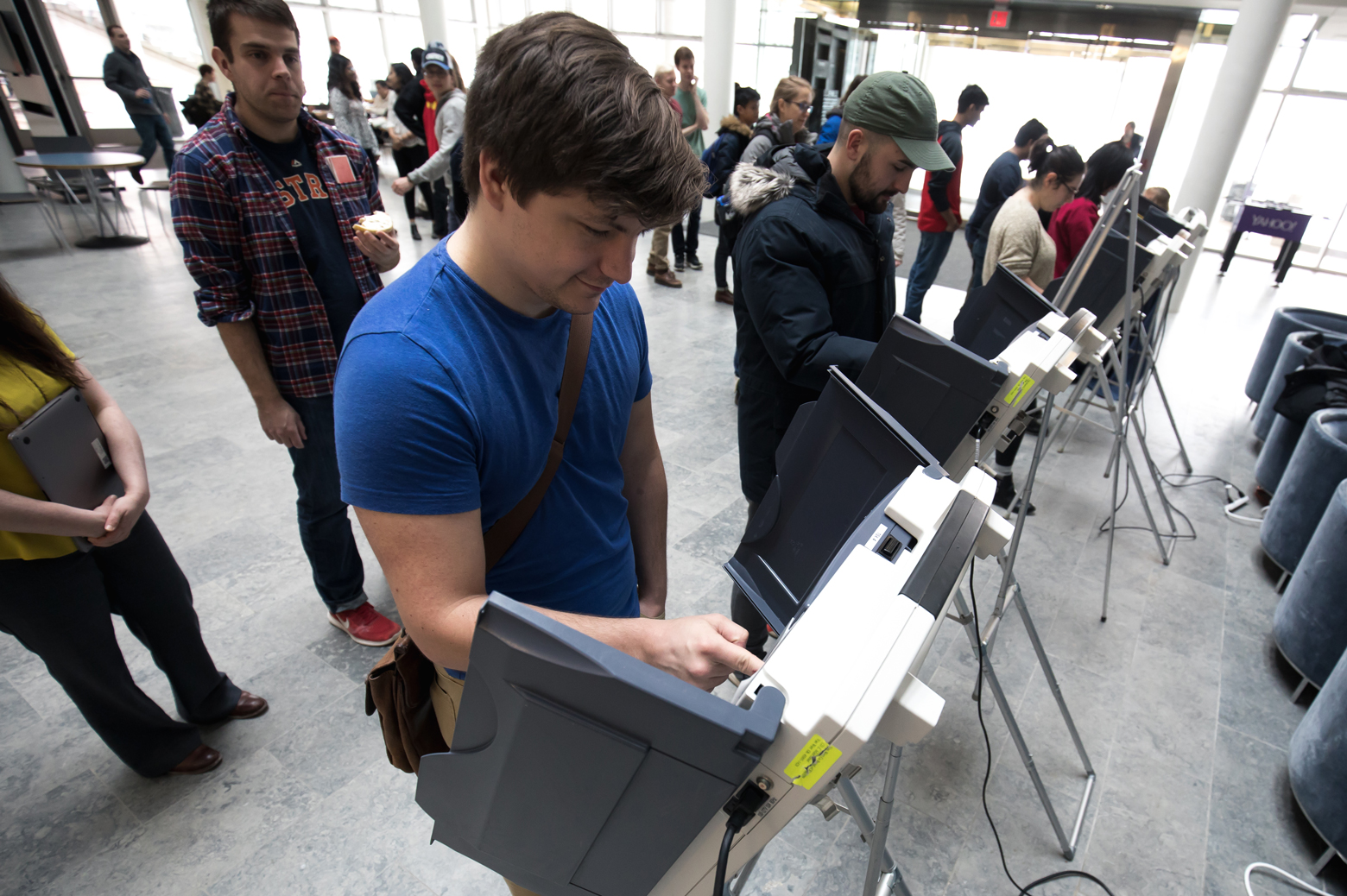 IMAGE:  Halderman’s research into election security expands into both the physical and virtual realm, having demonstrated vulnerabilities in the voting machines that some states still use and the online voting systems that are increasingly in demand. Photo: Levi Hutmacher/Michigan Engineering

There’s increasing pressure on election officials to provide easier means of remote voting. And some states have responded by allowing increasingly large fractions of the public to cast votes online.

But the risks of online voting are extremely high. It’s impossible to guarantee the security, either of the voter’s own device, which could have already been compromised by attackers in a way that will change a vote as it’s submitted. Or the server-side system could be hacked into in various ways to change the vote before it’s counted. And the technology that states are looking at now doesn’t provide any way for the voter or election officials to verify that the vote the voter intended is actually what gets counted.

“Voters should absolutely avoid voting online if any alternative is available,” Halderman said. “It’s much safer to vote by mail than to cast your vote over the internet under any circumstances.”

At least some voters will have the option of voting online in West Virginia and Delaware.

4.   Be patient—on election night and afterward

Due to the pandemic, many states have changed their procedures or their rules surrounding who can vote by mail. And those last-minute changes make it more likely that some things will go wrong on Election Day. We may well not know the results on election night or even for a number of days afterwards unless it’s a landslide outcome.

5.   Encourage your state to do a risk-limiting audit in future elections

The most efficient method of confirming that election results are correct is something called a risk-limiting audit. This is a transparent and observable public process that confirms the reported outcome by having people inspect randomly selected paper ballots.

“Risk-limiting audits are a way to determine with high confidence that the results of an election are correct, and it takes much less time and effort than a complete recount,” Halderman said. “This is something that every state should do after every significant election and something that voters should demand from their election officials.”

Only a handful of states so far require risk-limiting audits. Colorado and Rhode Island require an RLA before a vote is certified, and Nevada plans to do the same starting in 2022. Washington, Ohio and California allow election officials to select RLAs from a set of post-election audit options. Alabama, Georgia, Indiana, Michigan, Missouri, New Jersey, Pennsylvania and Virginia have already launched or plan to launch RLA pilots.