Our campus, like the global community, is contending with COVID-19 and working to adapt to a new normal. Many are rapidly working on solutions. See all COVID-19 developments from University of Michigan Engineering.

Loosely resembling the Ghostbusters’ “proton packs,” an ion-emitting wand under development at the University of Michigan has the potential to enable quick decontamination of surfaces in hospitals and public places.

The project has been funded with a rapid response grant from the National Science Foundation.

Liquid sanitizers like alcohol and bleach solutions can decontaminate hard surfaces, but these wet methods aren’t useful for fabrics unless a full wash and dry is in the cards. Because plasma is a dry method that leaves no residue, it could be used on soft materials as well, such as bus and airplane seats.

“A detergent has to sit on the surface for five to ten minutes before it destroys the pathogens,” said John Foster, a professor of nuclear engineering and radiological sciences. “With a plasma, the gas is so highly reactive that you only need seconds of contact between the plasma and the surface in order to decontaminate.”

When hospitals need to decontaminate soft materials, they typically lock them in specialized cabinets that feed in poisonous gasses, such ethylene oxide or hydrogen peroxide.

“Instead, we propose a handheld device that the user could shine over the surface,” said Mirko Gamba, a professor of aerospace engineering.

Plasma is produced by running a gas, such as air, through a high electric field. That field rips electrons off atoms and tears molecules apart, creating a soup of charged atoms and molecule fragments that, in this case, come barreling out the end of the wand. 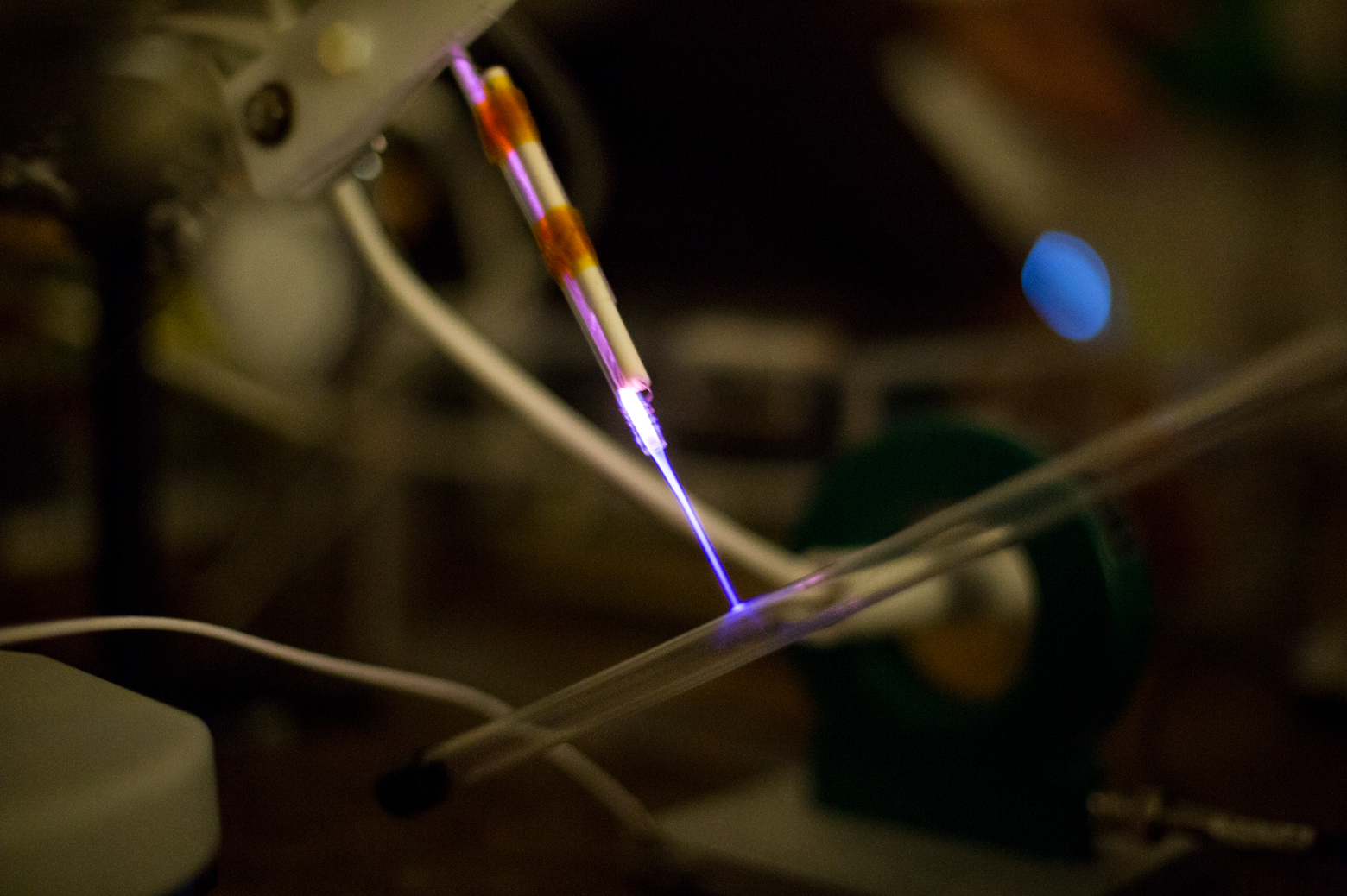 The plasma then destroys bacteria and viruses through a process similar to combustion, with oxygen-based ions pulling carbon out of their cell walls or protein casings. Even so, if someone stuck a hand into the plasma plume, they’d have to leave it there for tens of seconds before it would kill healthy cells.

A plasma plume can be made from plain old air, with a little water vapor in it. Water makes an efficient killer when electricity breaks down the H2O into hydrogen (H) and hydroxyl (OH) radicals, or molecular fragments with a strong incentive to bond.

But the gas could also be seeded with other chemicals that react with the plasma and transform into efficient killers of particular target viruses or bacteria.

Foster, Gamba and Mark Kushner, a professor of electrical engineering and computer science, will use the grant to test the portable plasma decontamination concept and accelerate it towards a prototype. One of the first orders of business is to explore the reactive molecular fragments in the plasma and discover how effective they are at killing pathogens. The plasma can then be adjusted to contain more of the most effective fragments. They also want to characterize the UV light generated in the plasma, which can also kill pathogens and break down their genetic codes.

Once they know the important levers for tuning the plasma to kill different kinds of pathogens, they hope the concept can be licensed to industry. Companies already have experience designing the power system that would go in the backpack.

Though the product may not be ready for a year, the goal is to deploy it toward the end of the current pandemic and have it at the ready when we face our next epidemic. Some prognosticators are already arguing that COVID-19 could continue to be a threat into 2022.