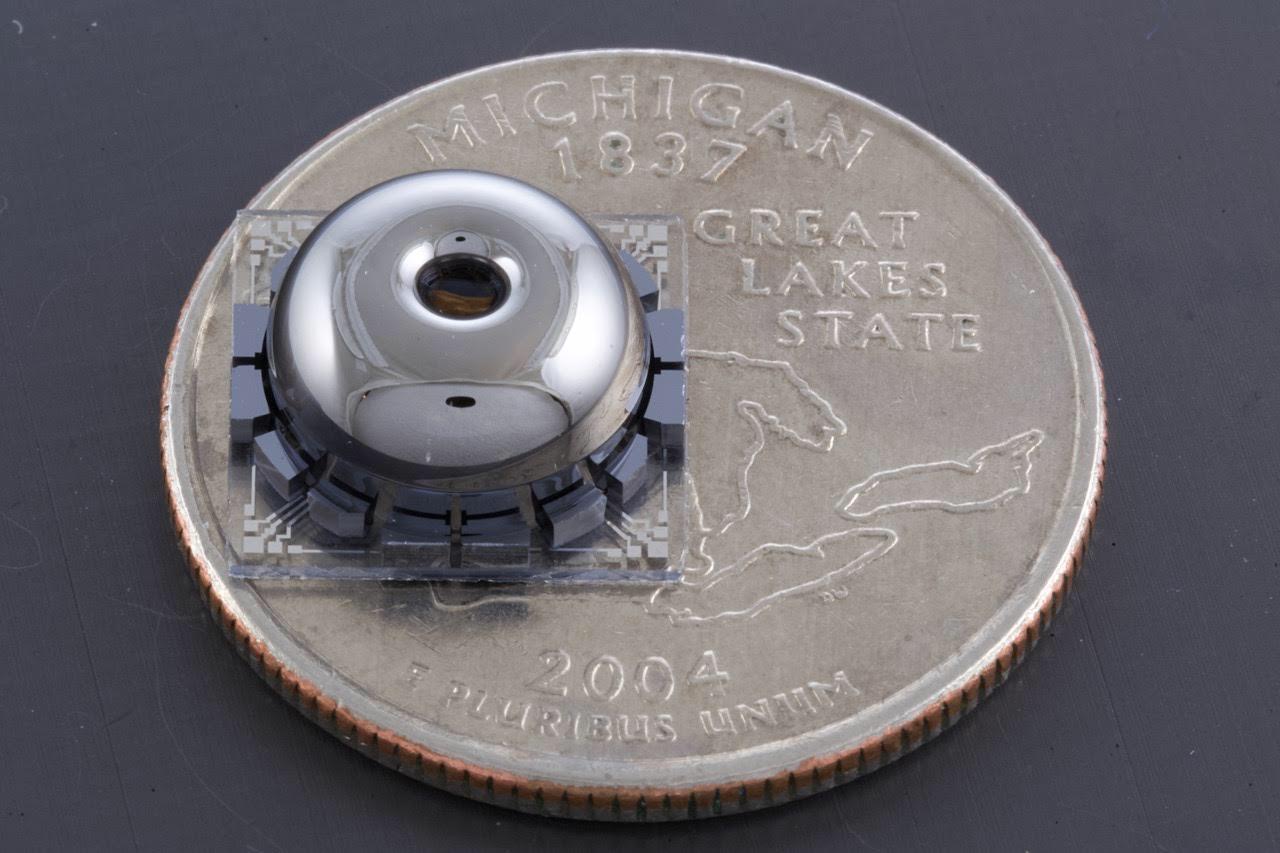 IMAGE:  The new resonator and electrodes, on a quarter for scale. The resonator is almost perfectly symmetrical, made of nearly-pure glass. This enables it to vibrate for long periods, similar to the ringing of a wine glass. Photo: Najafi Group, University of Michigan

A small, inexpensive and highly accurate gyroscope, developed at the University of Michigan, could help drones and autonomous cars stay on track without a GPS signal.

Most smartphones contain gyroscopes to detect the orientation of the screen and help figure out which way we’re facing, but their accuracy is poor. They’re the reason why phones often incorrectly indicate which direction a user is facing during navigation.

It doesn’t matter much to a human on the street or behind the wheel, but a driverless car could get lost quickly with a loss of GPS signal. Inside their backup navigation systems, autonomous vehicles currently use high-performance gyroscopes that are larger and much more expensive.

“High-performance gyroscopes are a bottleneck, and they have been for a long time. This gyroscope can remove this bottleneck by enabling the use of high-precision and low-cost inertial navigation in most autonomous vehicles,” said Jae Yoong Cho, an assistant research scientist in electrical engineering and computer science.

Better backup navigation equipment could also help soldiers find their way in areas where GPS signals have been jammed. Or in a more mundane scenario, accurate indoor navigation could speed up warehouse robots. 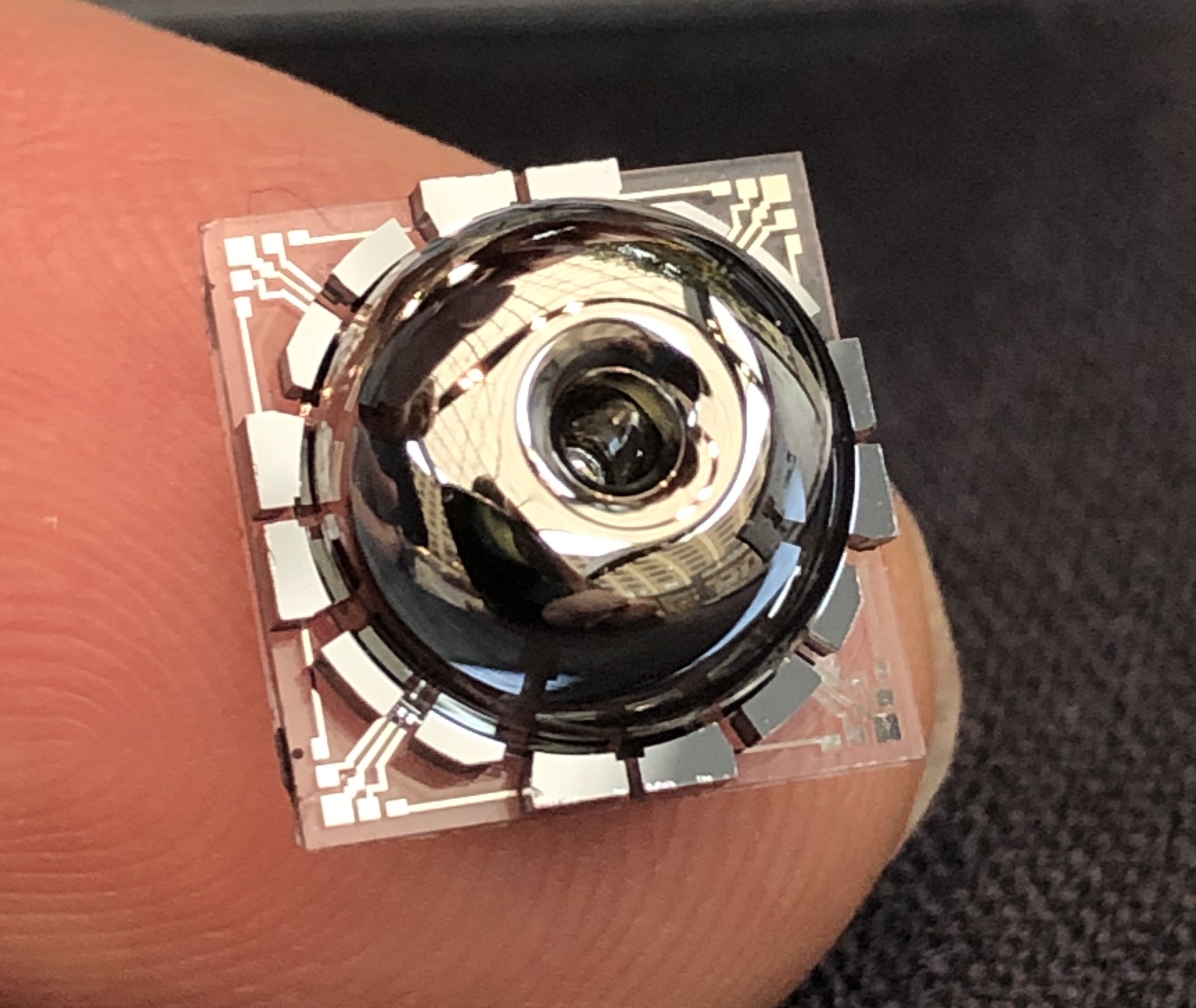 IMAGE:  The new resonator and electrodes, on a finger for scale. The resonator is almost perfectly symmetrical, made of nearly-pure glass. This enables it to vibrate for long periods, similar to the ringing of a wine glass. Photo: Najafi Group, University of Michigan

The device that enables navigation without a consistent orienting signal is called an inertial measurement unit (IMU). It is made up of three accelerometers and three gyroscopes, one for each axis in space. But getting a good read on which way you’re going with existing IMUs is so pricey that it has been out of range, even for equipment as expensive as autonomous vehicles.

The key to making this affordable, small gyroscope is a nearly symmetrical mechanical resonator. It looks like a Bundt pan crossed with a wine glass, made one centimeter wide. As with wine glasses, the duration of the ringing tone produced when the glass is struck depends on  the quality of the glass—but instead of being an aesthetic feature, the ring is crucial to the gyroscope’s function. The complete device uses electrodes placed around the glass resonator to push and pull on the glass, making it ring and keeping it going.

“Basically, the glass resonator vibrates in a certain pattern. If you suddenly rotate it, the vibrating pattern wants to stay in its original orientation. So, by monitoring the vibration pattern it is possible to directly measure rotation rate and angle,” said Sajal Singh, a PhD student in electrical and computer engineering, who helped develop the manufacturing process.

The way that the vibrating motion moves through the glass reveals when, how fast, and by how much the gyroscope spins in space.

To make their resonators as perfect as possible, Najafi’s team starts with a nearly perfect sheet of pure glass, known as fused-silica, about a quarter of a millimeter thick. They use a blowtorch to heat the glass and then mold it into a Bundt-like shape—known as a “birdbath” resonator since it also resembles an upside-down birdbath.

Then, they add a metallic coating to the shell and place electrodes around it that initiate and measure vibrations in the glass. The whole thing is encased in a vacuum package, about the footprint of a postage stamp and half a centimeter tall, which prevents air from quickly damping out the vibrations.

The research was supported by the Defense Advanced Research Projects Agency.

Cho and Najafi are co-founders of a startup company, Enertia Microsystems, based on the technology licensed from U-M.

The process for making the gyroscope was developed in the Lurie Nanofabrication Facility.

These students are recognized by the department for their outstanding scholarship, research, service, leadership, and entrepreneurship.| Long Read
Researchers
In the News
IEEE SpectrumApr 3, 2020
New gyroscope design will help autonomous cars and robots map the world
WDIVApr 1, 2020
University of Michigan gyroscope could reduce dependence on GPS in electronics