by Kate McAlpine
Michigan Engineering
July 19, 2019
If Moore's law's endgame is really computer components made from single molecules, we're going to need to know how to cool them.| Medium Read

Heat transfer through a single molecule has been measured for the first time by an international team of researchers led by the University of Michigan. This could be a step toward molecular computing—building circuits up from molecules rather than carving them out of silicon as a way to max out Moore’s Law and make the most powerful conventional computers possible. 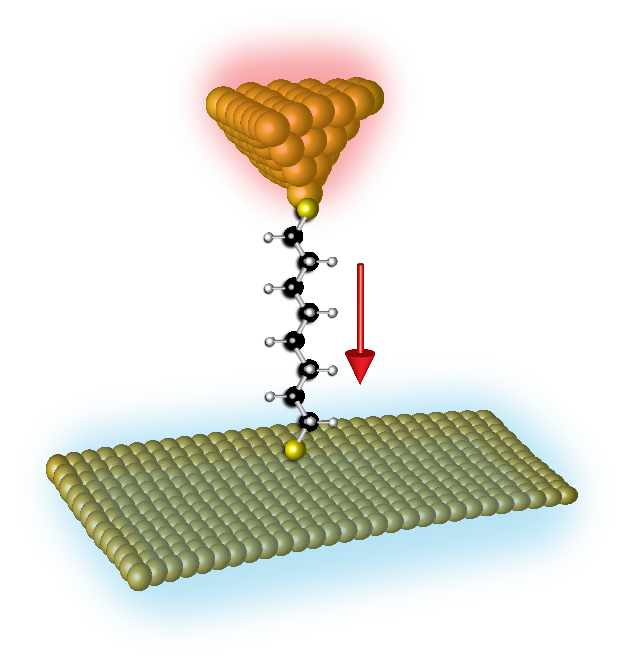 Moore’s Law began as an observation that the number of transistors in an integrated circuit doubles every two years, doubling the density of processing power. Molecular computing is widely believed to be Moore’s Law’s end game, but many obstacles stand in the way, one of which is heat transfer.

“Heat is a problem in molecular computing because the electronic components are essentially strings of atoms bridging two electrodes. As the molecule gets hot, the atoms vibrate very rapidly, and the string can break,” said Edgar Meyhofer, a professor of mechanical engineering at the University of Michigan.

Until now, the transfer of heat along these molecules couldn’t be measured, let alone controlled. But Meyhofer and Pramod Reddy, also a professor of mechanical engineering at U-M, have led the first experiment observing the rate at which heat flows through a molecular chain. Their team included researchers from Japan, Germany and South Korea.

Meyhofer and Reddy have been building the capability to do this experiment for nearly a decade.They’ve developed a heat-measuring device, or calorimeter, that is almost totally isolated from the rest of the room, enabling it to have excellent thermal sensitivity. They heated the calorimeter to about 20 to 40 Celsius degrees above the room temperature.

The calorimeter was equipped with a gold electrode with a nanometer-sized tip, roughly a thousandth the thickness of a human hair. The U-M group and a team from Kookmin University, visiting Ann Arbor from Seoul, South Korea, prepared a room temperature gold electrode with a coating of molecules (chains of carbon atoms).

Over the course of the separation, these chains continued to rip or drop away, one after the other. The team used the amount of electrical current flowing across the electrodes to deduce how many molecules remained. Collaborators at the University of Konstanz in Germany and the Okinawa Institute of Science and Technology Graduate University in Japan had calculated the current expected when just one molecule remained—as well as the expected heat transfer across that molecule

When a single molecule remained between the electrodes, the team held the electrodes at that separation until it broke away on its own. This caused a sudden, minuscule rise in the temperature of the calorimeter, and from that temperature increase, the team figured out how much heat had been flowing through the single-molecule carbon chain.

They conducted heat flow experiments with carbon chains between two and 10 atoms long, but the length of the chain did not seem to affect the rate at which heat moved through it. The heat transfer rate was about 20 picowatts (20 trillionths of a watt) per degree Celsius of difference between the calorimeter and the electrode held at room temperature.

“In the macroscopic world, for a material like copper or wood, the thermal conductance falls as the length of the material increases. The electrical conductance of metals also follows a similar rule,” said Longji Cui, first author and U-M PhD graduate (PhD ME ‘18), currently a postdoctoral researcher in physics at Rice University. 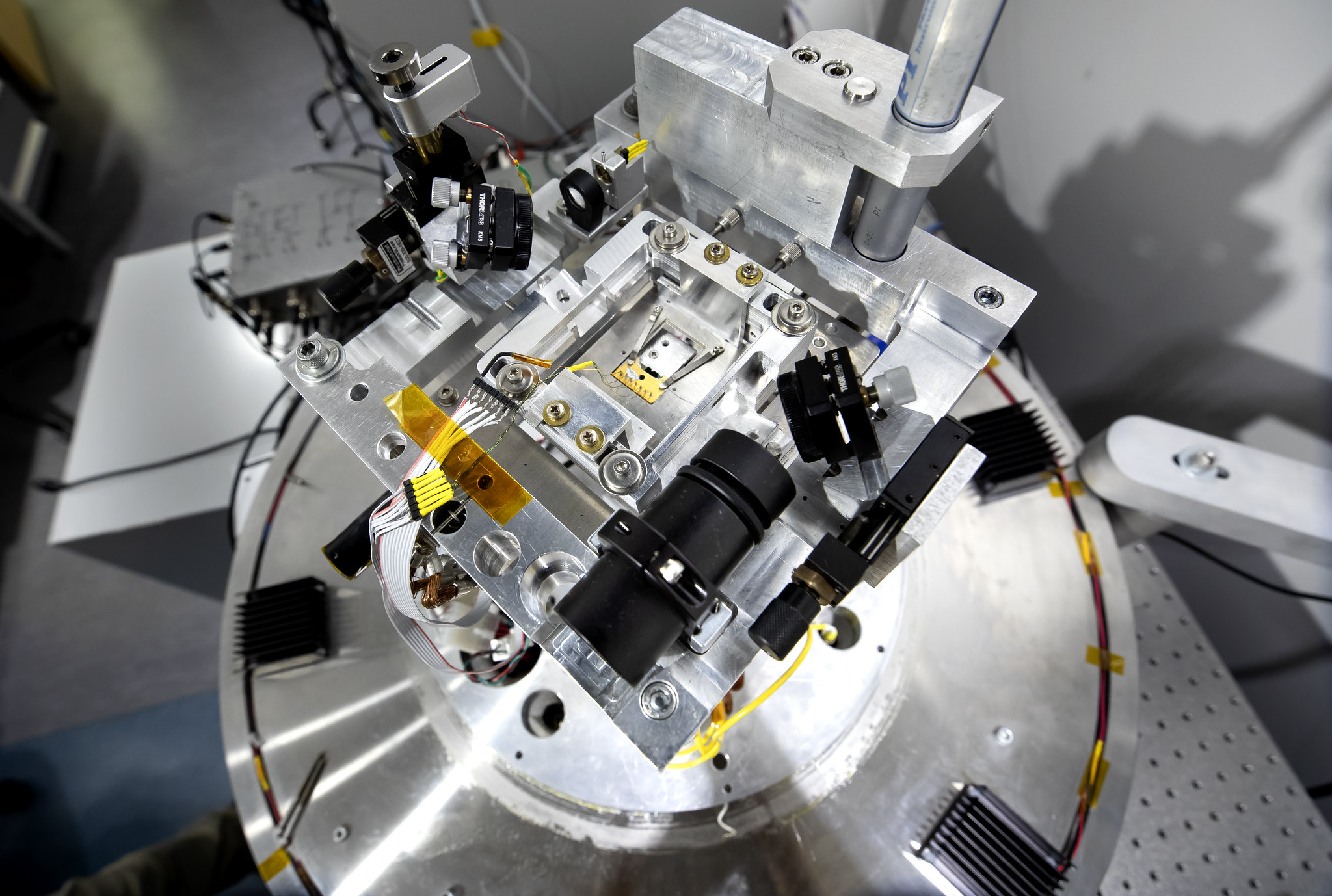 “However, things are very different at the nanoscale,” Cui added. “One extreme case is molecular junctions, in which quantum effects dominate their transport properties. We found that the electrical conductance falls exponentially as the length increases, whereas the thermal conductance is more or less the same.”

Theoretical predictions suggest that heat’s ease of movement at the nanoscale holds up even as the molecular chains get much longer, 100 nanometers in length or more—roughly 100 times the length of the 10-atom chain tested in this study. The team is now exploring how to investigate whether that is true.

This work is described in a paper in the journal Nature, titled, “Thermal conductance of single-molecule junctions.” 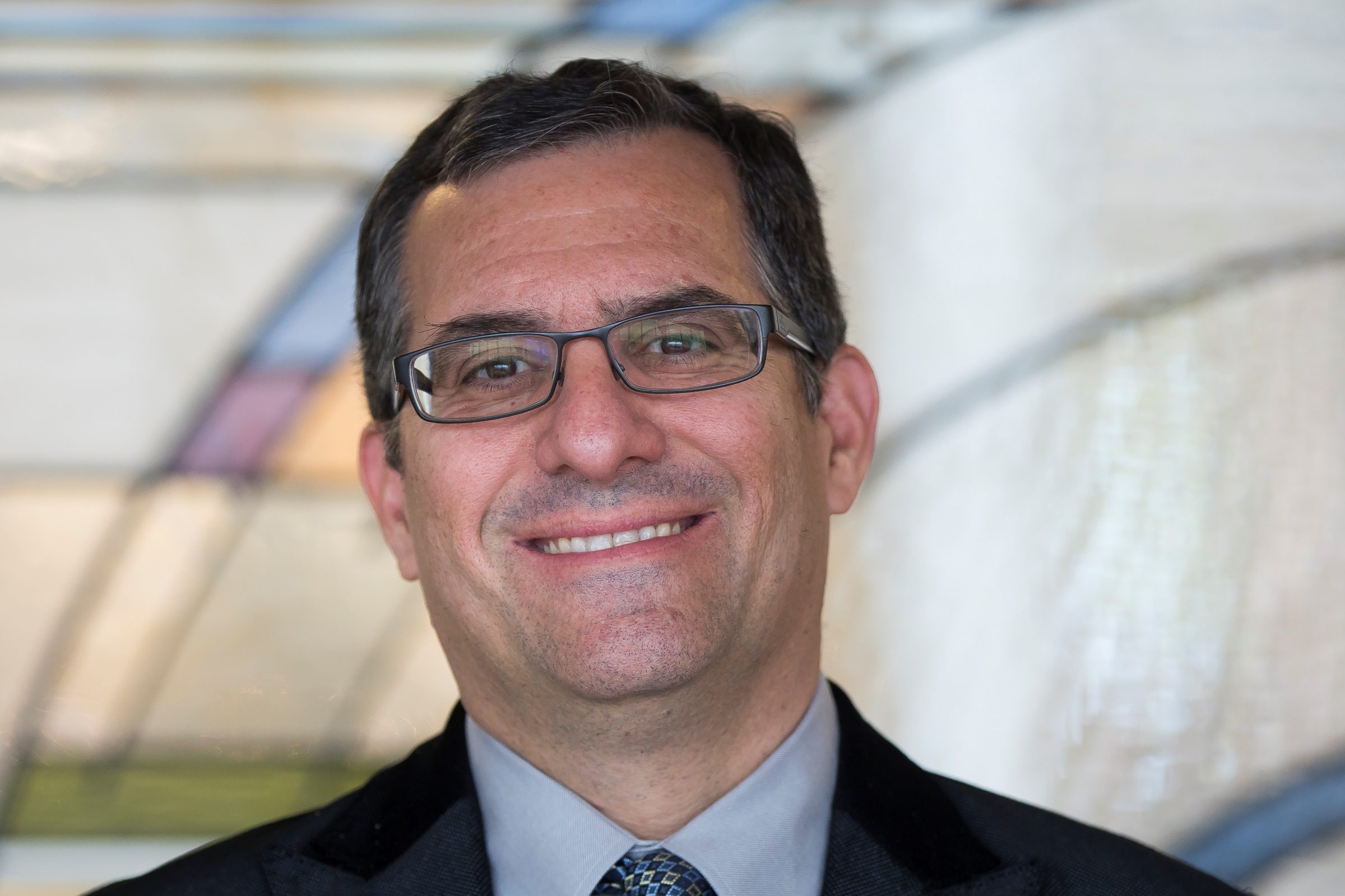 Steven Ceccio, the Vincent T. and Gloria M. Gorguze Professor of Engineering and the Associate Dean for Academic Affairs at the University of Michigan College of Engineering, has been named the 2021 recipient of the Fluids Engineering Award from the American Society of Mechanical Engineers (ASME). | Short Read 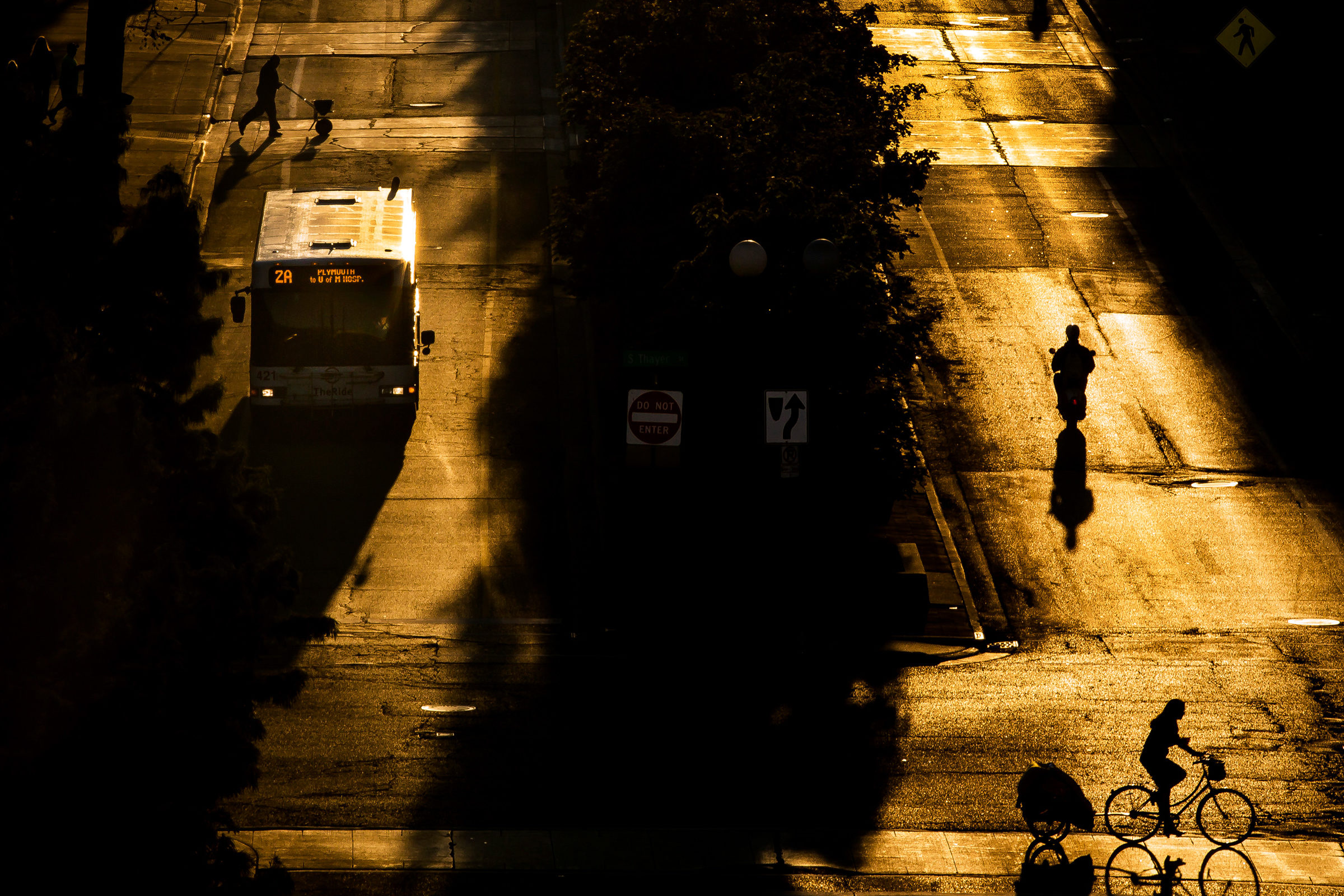 ‘Transportation is a form of freedom’: How to make it more equitable 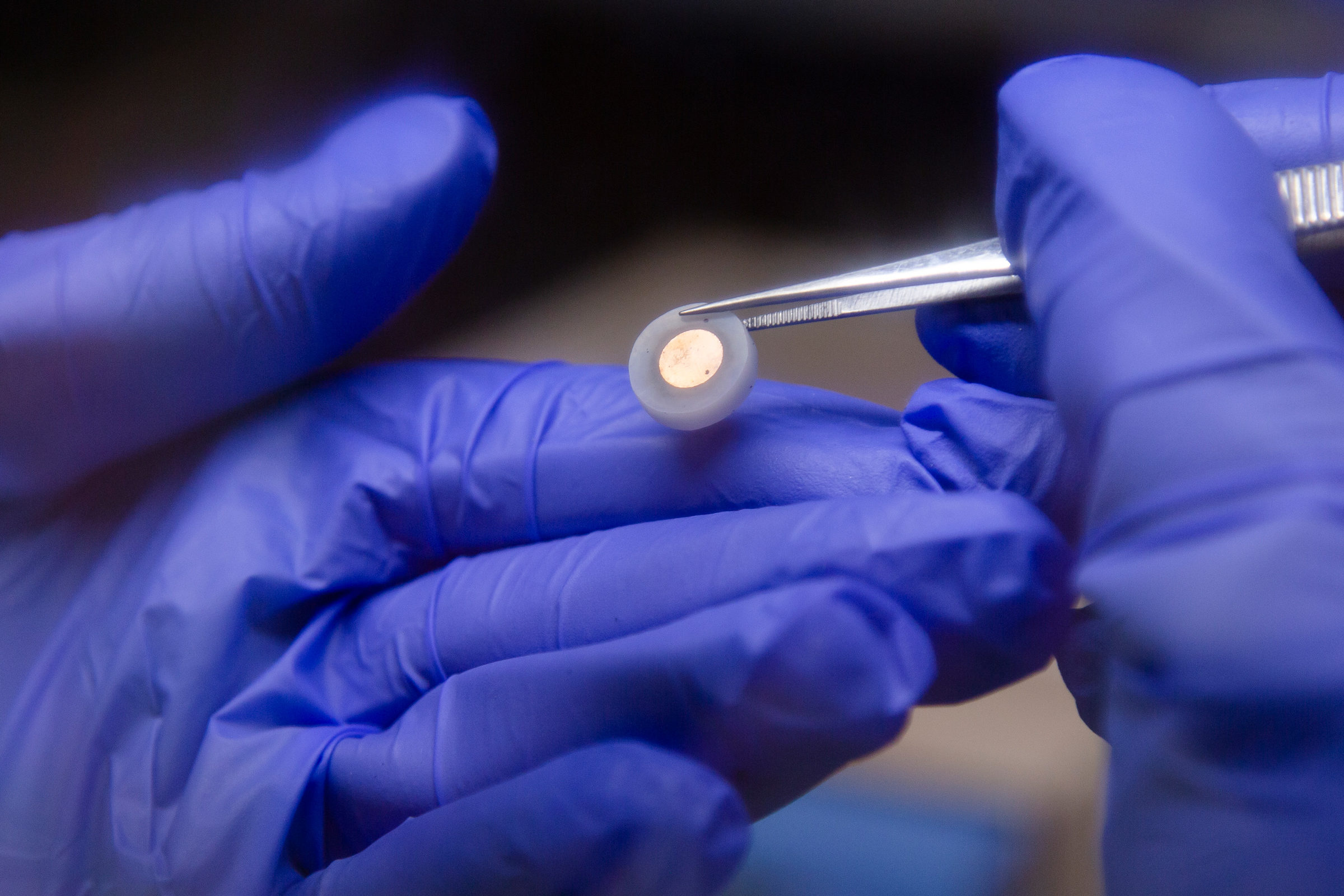 Next-gen electric vehicle batteries: These are the questions we still need to answer