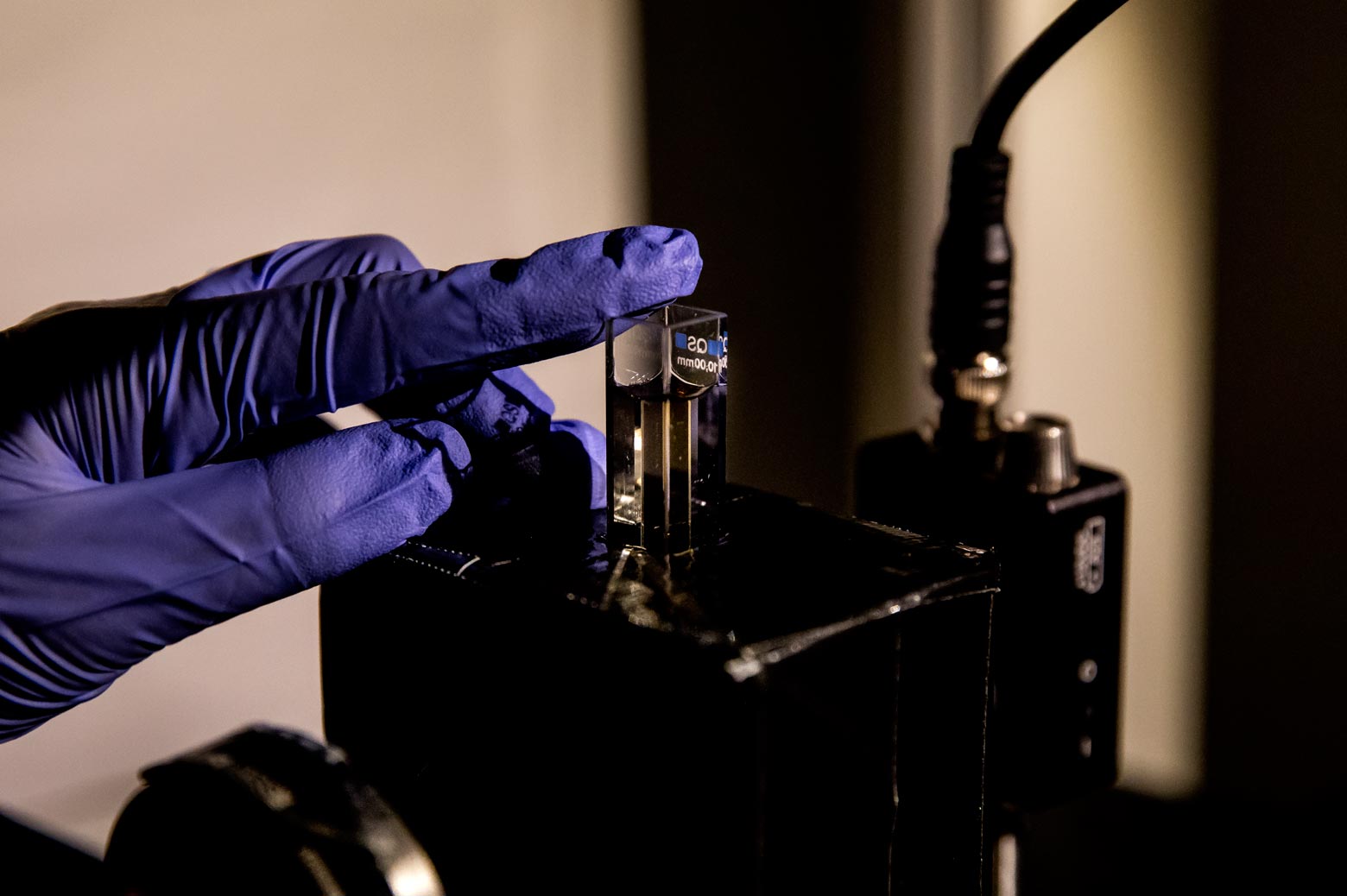 IMAGE:  Minjeong Cha, MSE PhD Student, applies a gel made up of chiromagnetic nanoparticles that are a conduit for modulating light to a laser apparatus in the North Campus Research Complex. Photo: Joseph Xu

“Help me, Obi Wan Kenobi. You’re my only hope.”

For many of those around at the release of Star Wars in 1977, that scene was their first introduction to holograms—a real technology that had been around for roughly 15 years.

So why aren’t holograms or related optical devices part of our everyday lives yet? The technologies can be created by using magnetic fields to alter the path of light, but the materials that can do that are expensive, brittle and opaque. Some only work in temperatures as cold as the vacuum of space.

Now, researchers from the University of Michigan and the Federal University of Sao Carlos in Brazil have demonstrated that inexpensive nanoparticles in a gel can replace traditional materials at a drastically reduced cost. And their approach works at room temperatures.

It opens up a world of possibilities for the use of magnetic fields to modulate light, with applications in autonomous vehicle sensors, communication in space and optical wireless networks.

To date, expensive rare-earth metals such as europium, cerium and yttrium have been used to demonstrate how the path, speed and intensity of optical, or light-based, signals can be controlled with magnetic fields. This capability is already in commercial use in high-speed fiber optic internet cables. But the elements’ cost and temperature needs have kept the technology from greater use.

A cost-effective, room temperature solution to magnetic control of twisted light could enable mass-market 3-D displays, holographic projectors and new generation of Light Detection and Ranging (LIDAR). LIDAR is one of the main technologies that give “sight” to autonomous vehicles.

“Many companies and labs developed exciting prototypes using magneto-optic technology,” said Nicholas Kotov, U-M’s Florence V. Cejka Professor of Chemical Engineering, who led the project. “But their technological acceptance has been limited to date because of the fundamental materials issues with rare earth magneto-optics. It has been like trying to solve the Rubik’s Cube puzzle. You get one property right but lose the others.” Kotov is also a professor of materials science and engineering.

Nicholas Kotov, and his group of researchers have created a cobalt-based chiromagnetic nanoparticle that could enable more widespread use of light modulation via magnetism.

In a paper published today in Science, the researchers demonstrate that they could use nanoparticles based on inexpensive cobalt oxide—a white-colored, magnetic semiconductor—to control twisted light well using magnetic fields. The trick, the researchers found, was to twist the nanoparticles themselves by coating them with amino acids. The twist could be either right- or left-handed—a property called chirality.

The chirality of the nanoparticles produced a heightened sensitivity to magnetism and also strengthened interactions with twisted light—more formally referred to as “circularly polarized light.” The researchers demonstrated that by suspending the nanoparticles in a transparent, elastic, room-temperature gel, they could change the intensity of circularly polarized light by applying a magnetic field.

“This opens the road to the wide proliferation of magneto-optical devices with exciting possibilities emerging in 3-D displays and real-time holography—all utilizing circularly-polarized light,” Kotov said. “Furthermore, the small size of the nanoparticles enables their use in computer engineering and large-scale manufacturing of magneto-optical composites.”