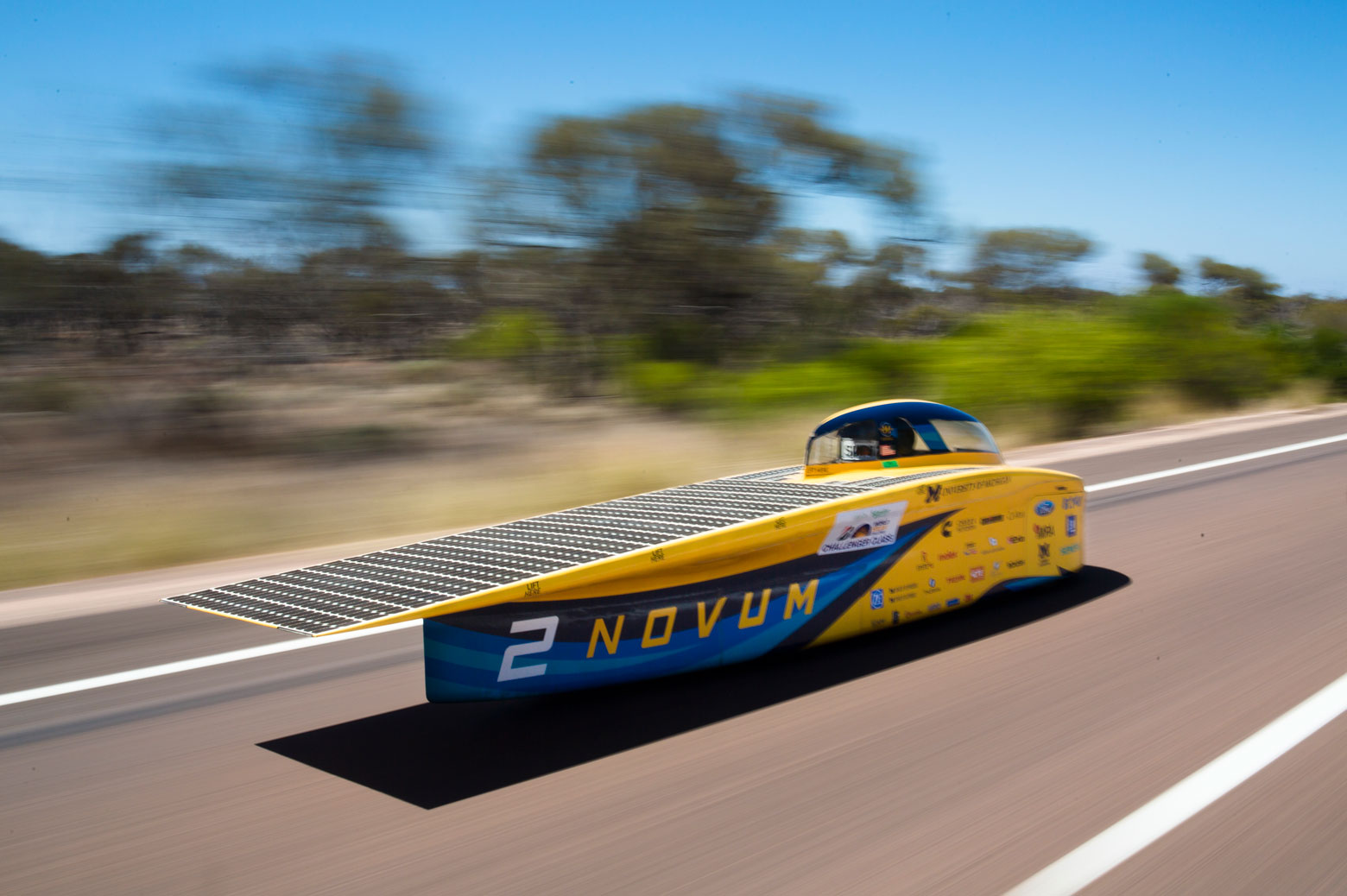 In an innovative, bullet-shaped car, the University of Michigan Solar Car Team took a historic second place today in the Bridgestone World Solar Challenge, an 1,800-mile race across the Australian Outback.

Not only was U-M the first American team to complete the race, the students are celebrating the most successful finish at this event in team history. U-M—the reigning North American champion—has come in third in this international race five times in the team’s 27-year history. Team members and alumni had taken to calling it “the curse of third.” It’s been broken. 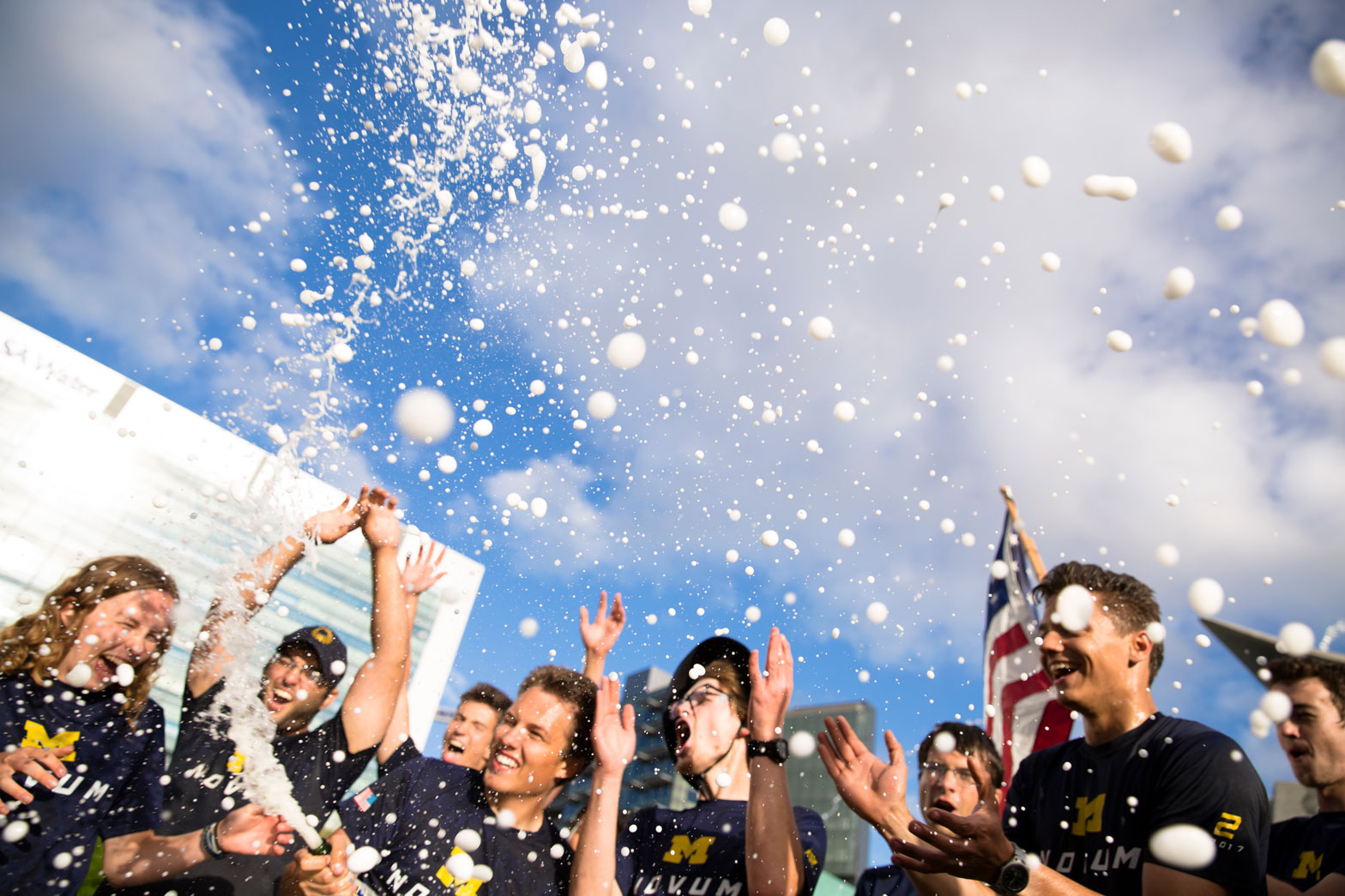 “This is indescribable,” said team member Patrick Irving at the finish, as team members hugged, high-fived and even cried. “I’m so proud of everyone for doing something no other Michigan team has done. We had really high hopes for this car and doing something different. It was a big risk. We knew it was going to go either really well, or really not well. We’re all very happy with how things turned out.”

Novum, as the team named this year’s car, is the smallest and most aerodynamic vehicle U-M has ever built.

After five days of racing down the Stuart Highway and camping by the roadside, Novum crossed the finish line at 4:09 p.m. in Adelaide, South Australia—around 1:30 a.m. ET. Michigan arrived one hour and 59 minutes behind the Dutch winner, Nuon, from Delft University of Technology. Third place went to team Punch Powertrain, of Belgium, who came in around 30 minutes after U-M.

Michigan was one of only two top teams that raced a skinny, monohull car – a radical departure from the proven catamaran design that dominated the field. And future U-M teams may be thanking them, according to Neil Dasgupta, the team’s faculty advisor and an assistant professor of mechanical engineering.

“We took a chance on going with a small car, and we’re going to be ahead of the curve for years to come because of that,” Dasgupta said. “I do believe that as the race continues to evolve, more and more teams will move towards a smaller car design.”

He and a group of alumni, family and friends traveled to Australia to follow the team along the race route. 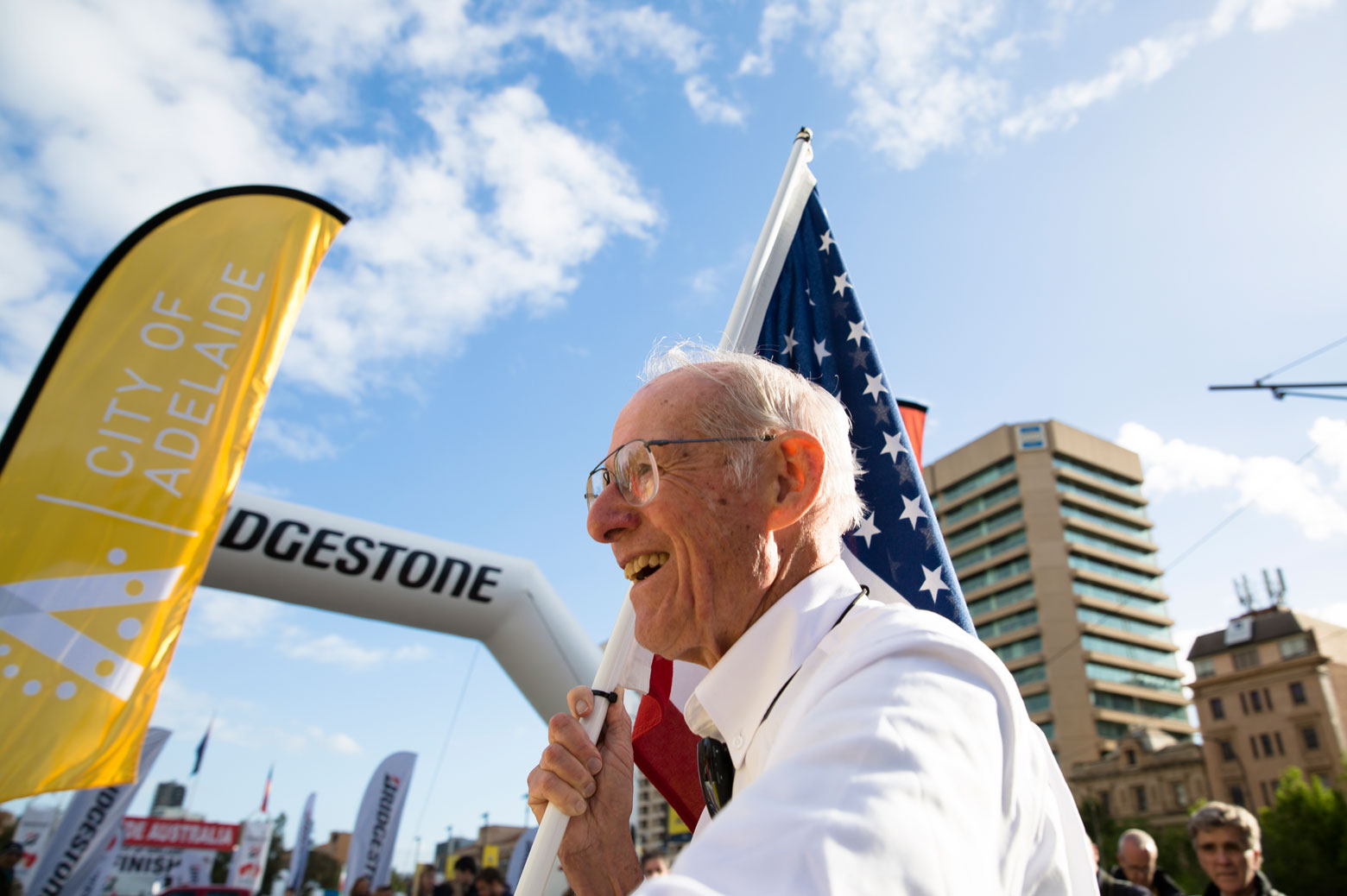 It wasn’t just innovative aerodynamics that earned Novum its prize. Clouds, high winds and overnight thunderstorms added to the challenge and excitement of this year’s cross-continental journey. Teams had to negotiate giant puddles at control stops and, at one stop, winds so high, they didn’t even lift and tilt their solar arrays to recharge.

They successfully adjusted their race strategy in response to the weather, and that’s one of the most critical component to a solar race. For this campaign, lead strategist Alan Li created a custom machine learning weather prediction model based on a system they developed with IBM for the 2015 race. 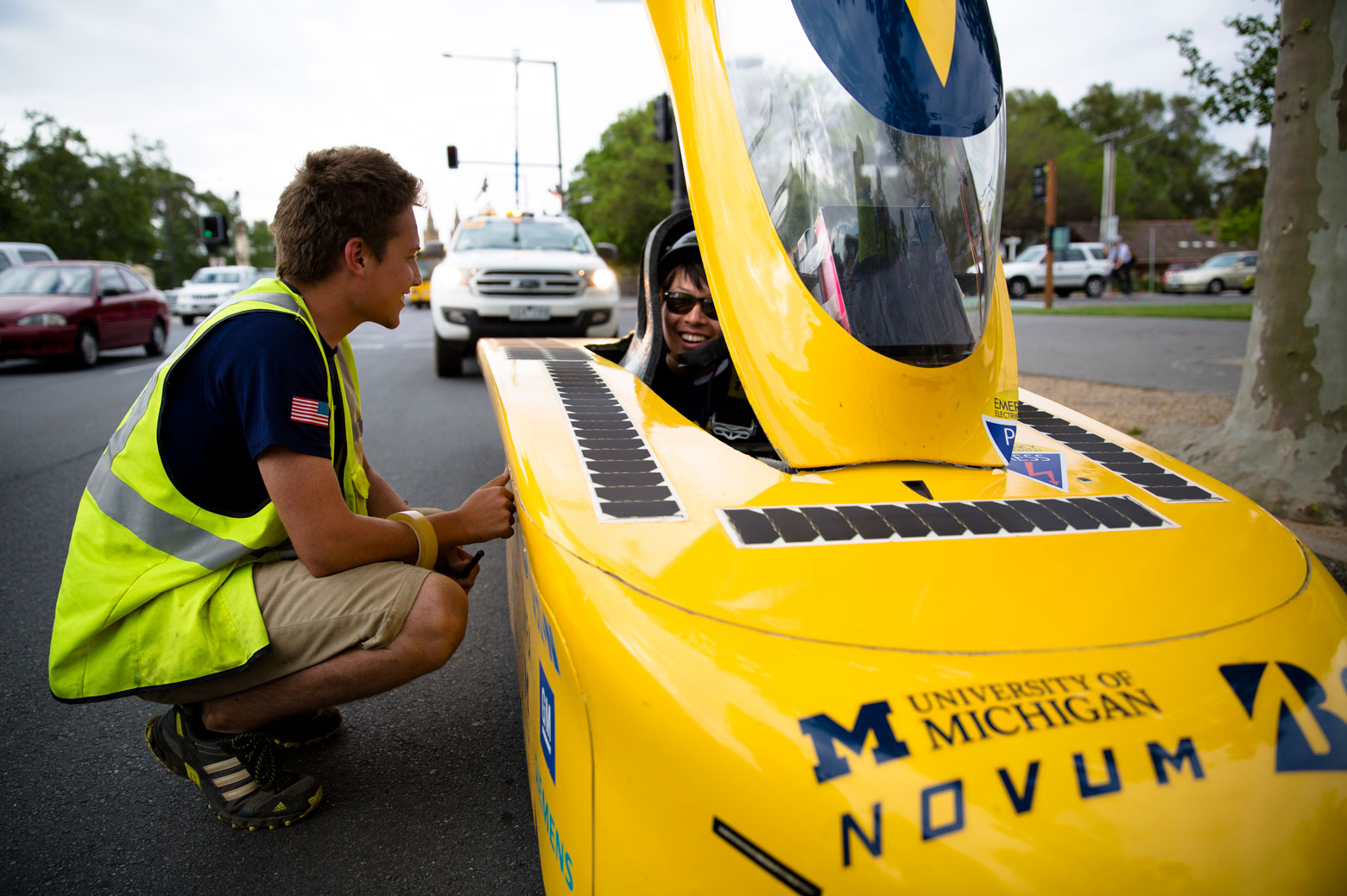 “What’s important is that we were able to predict the entire day’s average radiation,” said Li. “It doesn’t matter if we get the energy earlier or later in the day. It’s also important to take every day of the race into consideration—to look ahead. It could be sunny one day and we drive really fast, but if it’s cloudy the next, we wouldn’t have enough energy.”

Every team member has individual roles and areas of expertise that must work together as an integrated machine. Before the first day of the race, project manager Jon Cha gave a pep talk.

“The best teams have confidence in themselves. They’re not focused on winning, they’re focused on what they’re doing—and they’re also very, very relaxed,” Cha said.

This advice was echoed by team leadership throughout the five-day expedition. And although there were tense moments, the crew stayed focused, stayed calm – and reaped the reward. 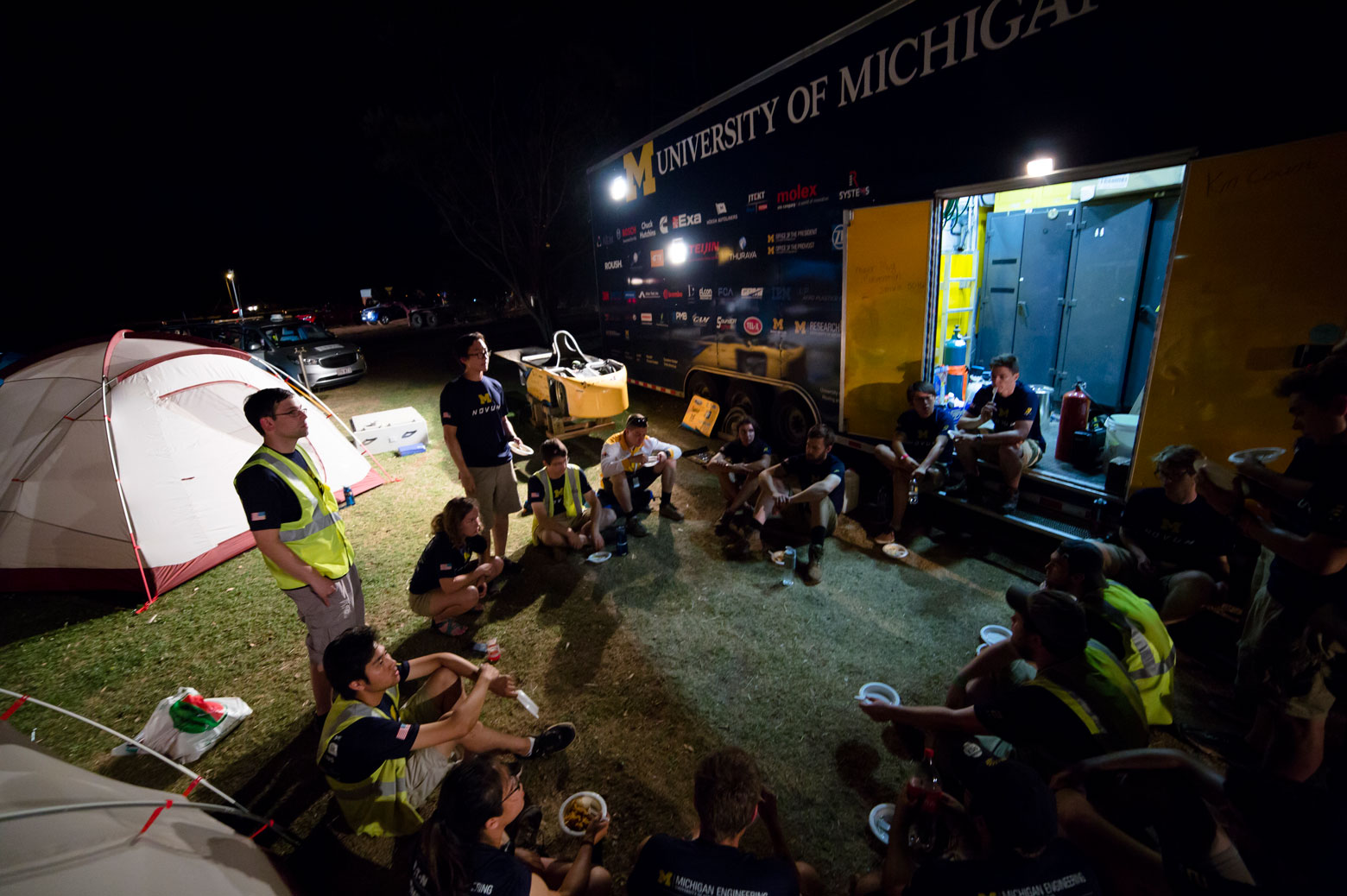 IMAGE:  The U-M Solar Car Team debriefs at their campsite in Daly Waters at the end of day one of the 2017 Bridgestone World Solar Challenge. Photo: Evan Dougherty/Assistant Multimedia Editor - University of Michigan - College of Engineering.
Related Links
Blue through the Outback | Race, day four
Our panel of solar supporters | Race, day three
Cloudy with a chance of machine learning | Race, day two

The award celebrates those who have gone above and beyond to service and support social justice, diversity, equity, and inclusion efforts. | Short Read
Researchers
In the News
The Washington PostOct 12, 2017
Dutch team wins 7th Australian solar-powered car race