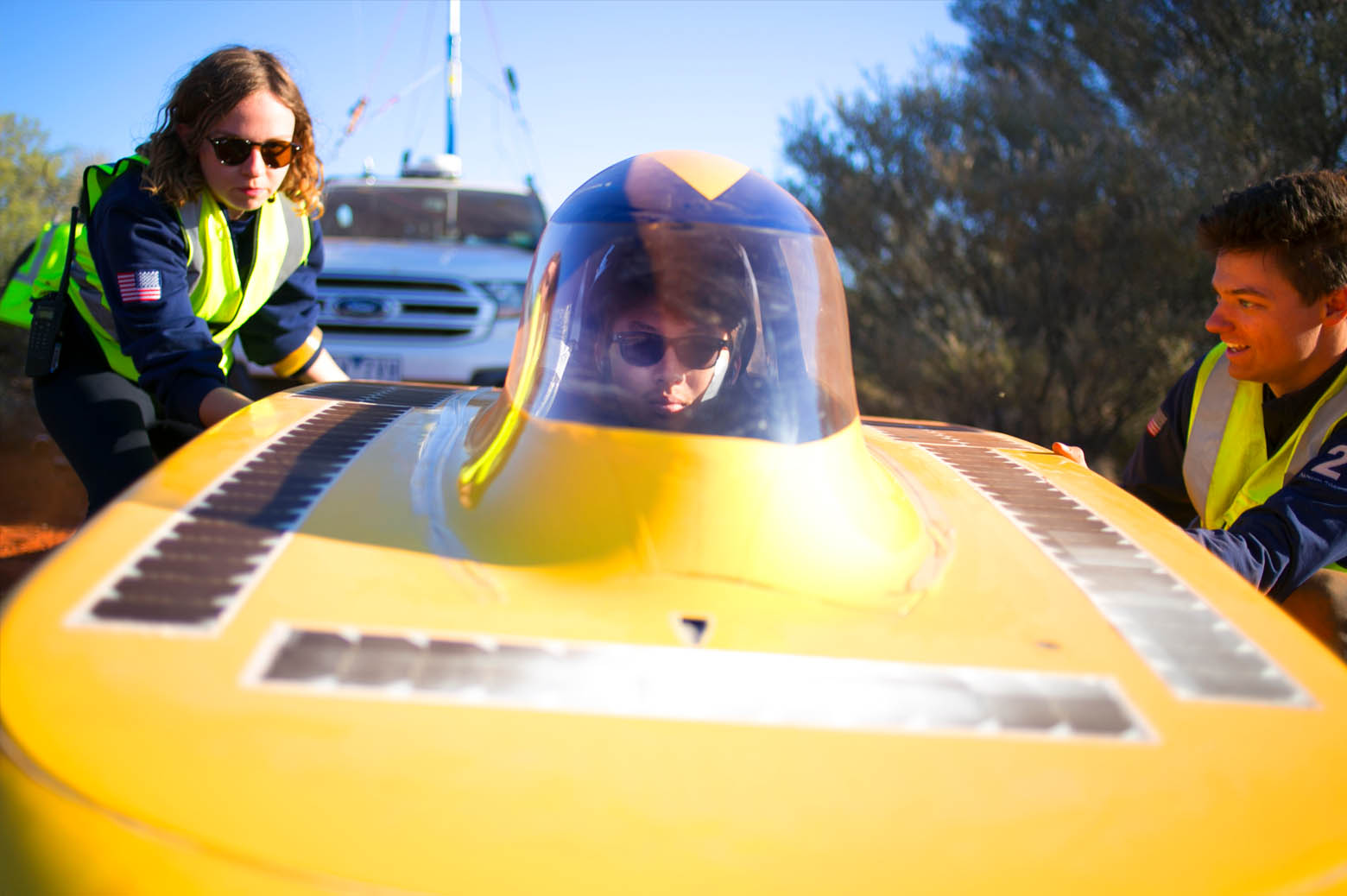 In a bullet-shaped car powered by the sun, the nation’s top solar car team from the University of Michigan will soon race across Australia in the Bridgestone World Solar Challenge. The 1,800-mile journey, which takes place every other year, starts this weekend. A team from Michigan Engineering is traveling with the race crew and will post regular updates.

U-M’s car, named Novum, measures just over one meter across. It’s one of the skinniest vehicles competing in this year’s challenger class. Novum is roughly 43 percent narrower than the team’s 2015 vehicle, Aurum. U-M is one of two top teams that will be racing a bullet-shaped, monohull car – a radical departure from the proven catamaran design that dominates the field.

The aptly named Novum–Latin for ‘new thing’– is the most aerodynamic vehicle the team has ever built. And with 2.64 square meters of high-efficiency multijunction gallium arsenide solar cells, it also carries the most advanced power generation system in the squad’s history.

“I think that the team believes we can win it,” says Clayton Dailey, the team’s engineering director and a senior studying mechanical engineering. “But one of the worst things we can do is be overconfident. We know we don’t have it in the bag yet, which pushes us to keep getting better.” 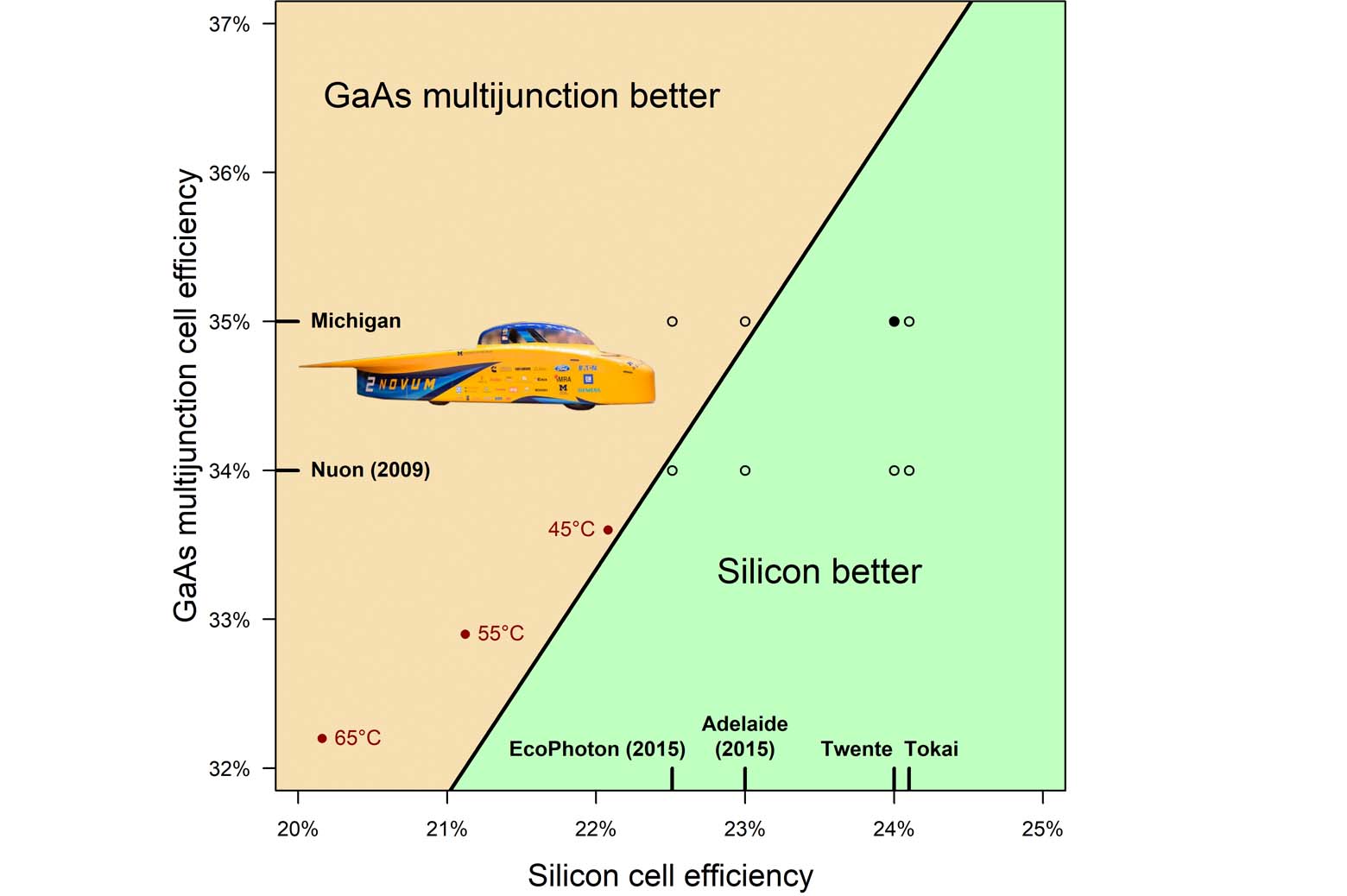 IMAGE:  The performance of multijunction GaAs degrades less with heat than that of silicon, so this increases the benefit for GaAs beyond that shown in the chart. For example, if we assume a 24%/35% efficiency combination for Si/GaAs, with temperature coefficients of power of 0.4%/0.2%, then the red dots in the chart show a GaAs advantage above about 43°C. Source: Scientific Gems .

Novum is the team’s 14th vehicle, and this year marks the international competition’s 30th anniversary. Michigan entered the second World Solar Challenge in 1990 and has been a top competitor ever since. U-M’s team has finished third in the world race five times in its 27-year history. It has won the comparable American race nine times – and won the Abu Dhabi Solar Challenge in 2015. 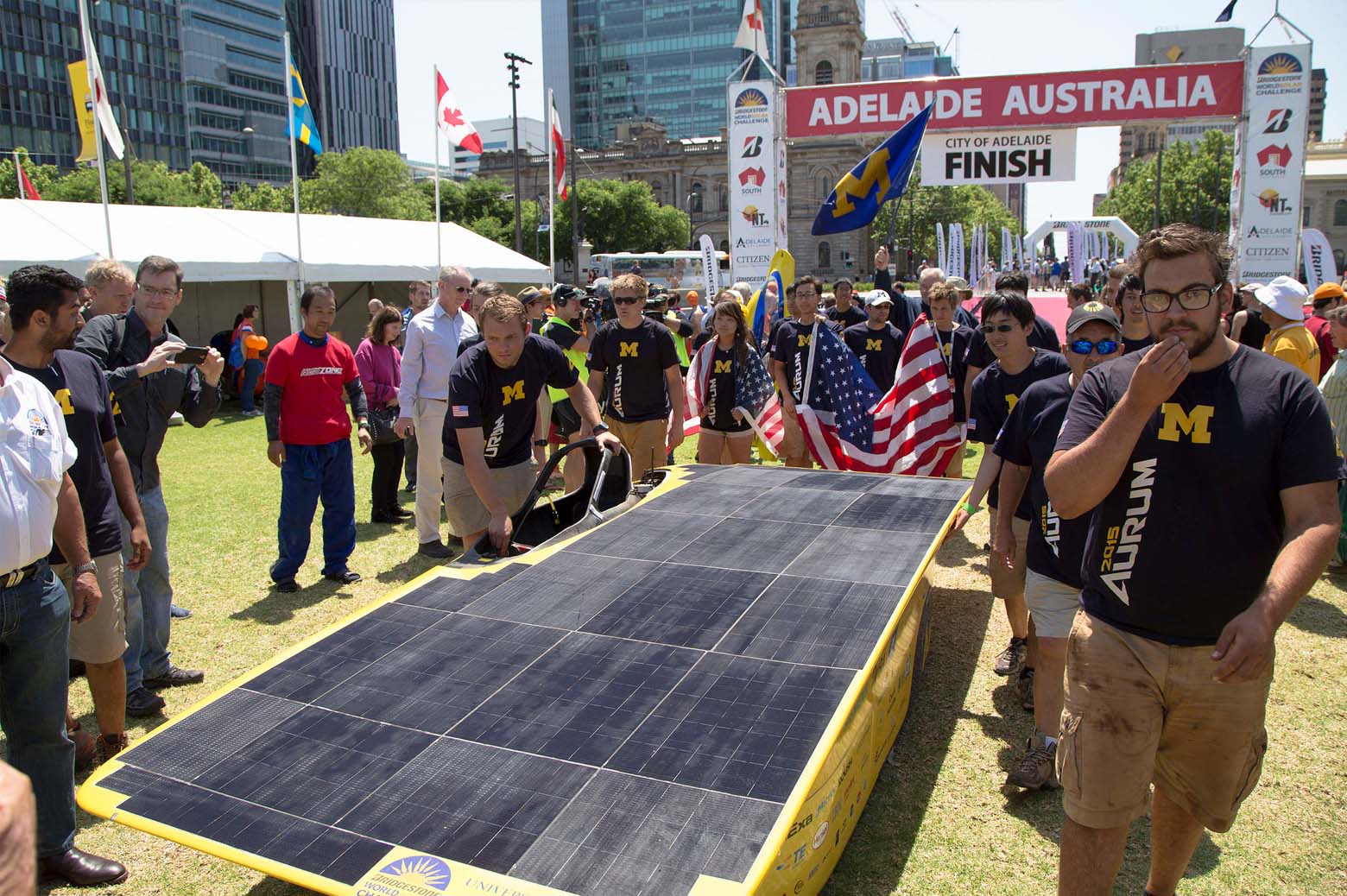 In the 2015 World Solar Challenge, Aurum took fourth place in one of the closest finishes in the race’s history. Jiahong Min, the current team’s aerodynamics leader and a graduate student studying mechanical engineering, was on Aurum’s race crew. “Getting fourth place and being only five minutes behind third was very frustrating,” said Min.

It was a large motivation to come back and take revenge.(chuckling) Jiahong Min, U-M Solar Car Team
Tweet

Although not on this year’s race crew, Min led the aerodynamics unit into uncharted territory. This was his third build cycle with the team, and his experience using computational fluid dynamics software helped the team achieve a data driven aerodynamics advantage over previous U-M vehicles. 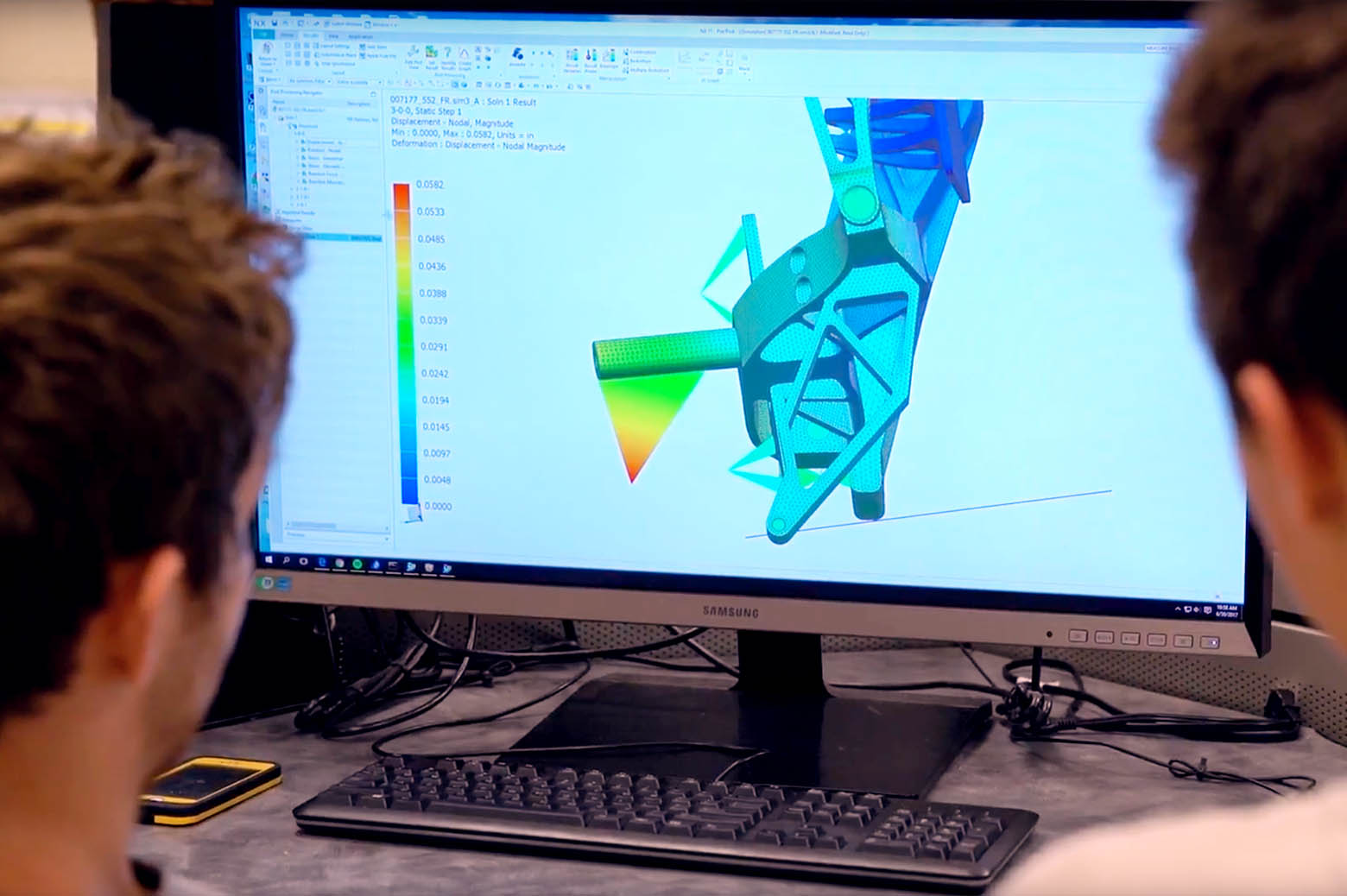 When exploring the optimal design for Novum, Min led a rigorous phase of modeling and simulation. “We have written scripts that helped automate the process,” says Min. “Aero and data turnaround time was much faster.” This allowed the team to test more concepts under the same time constraints.

Backed by wind tunnel data and mock race road tests, Novum’s daring design is poised to be a fast competitor in Australia, the team says. But, as the race crew testifies, there’s more to winning than a fast car.

“The whole summer we definitely grew closer to each other, but our eight-day mock race changed the dynamics of our team,” said Chae Woo Lim, mechanical engineer and driver. “Before we were more of a manufacturing team, and now we are a racing team. There’s definitely a shift in how people act.”

The 2017 Bridgestone World Solar Challenge starts at 8:30 a.m. Sunday, Oct. 8, in Darwin in Australia’s Northern Territory. That’s 7:00 p.m. EDT Saturday, Oct. 7, in the U.S. The race ends in Adelaide, South Australia. While it’s officially over Oct. 15, the U-M team typically finishes in four or five days. Several University of Michigan staff members will travel with the team and post coverage.The U-M Solar Car Team is composed of more than 100 students from across the university’s campus.