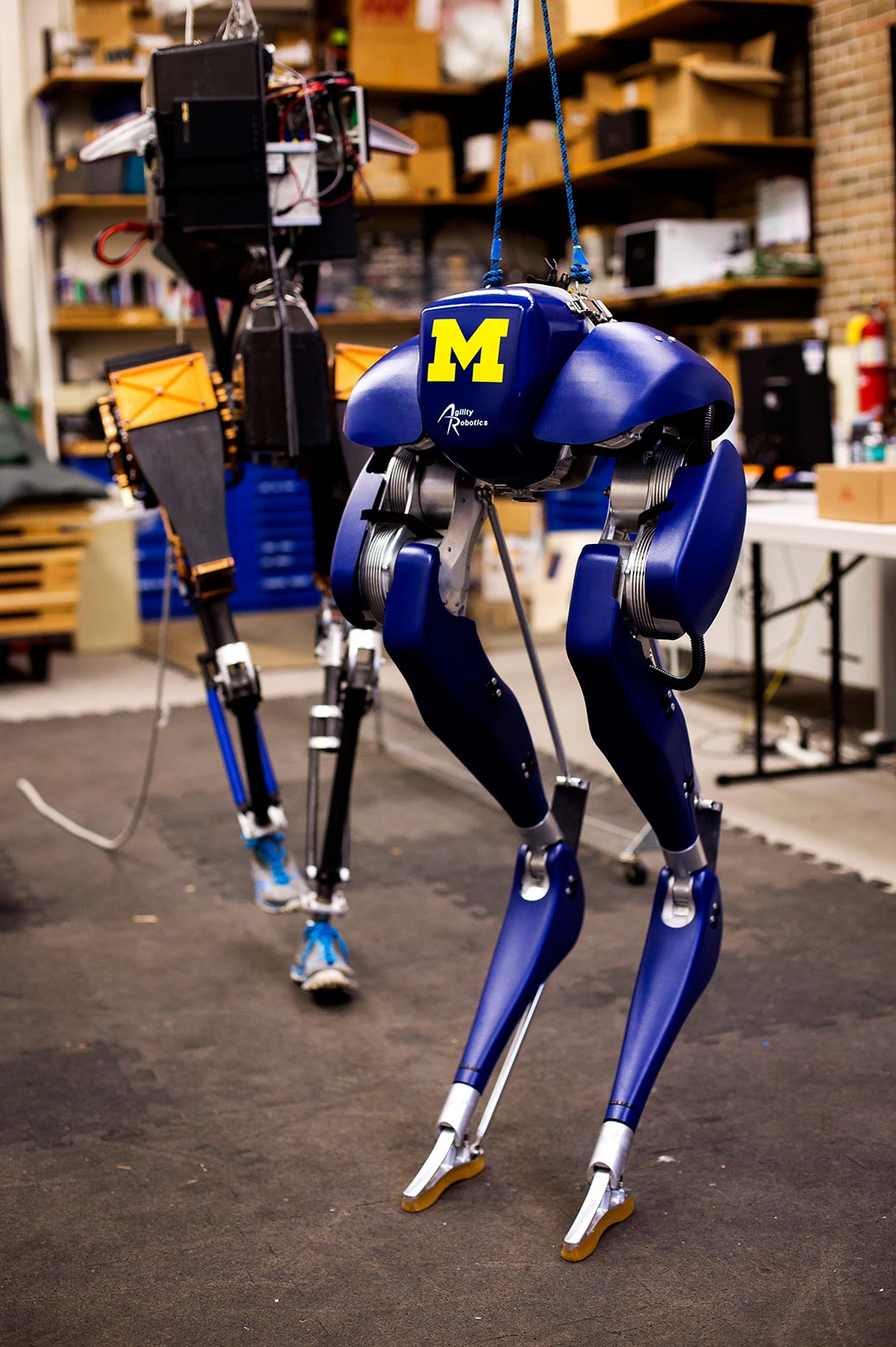 Michigan Robotics’ latest member arrived last week in a black plastic case about two feet to a side, buried beneath a layer of foam cubes and crouched on a metal calibration stand. All brushed aluminum and black fiberglass, with crash resistant casings in matte Michigan blue, the new robot had a polish that the old ‘bot, seeming to hover in the background, never had.

More importantly, the latest model, dubbed Cassie Blue by the Michigan team, has control over two more joints in each leg – motors for hip rotation and at the ankle. Not only do these give Cassie the potential to be better at the independent walking pioneered by its predecessor, MARLO, but it opens a host of new possibilities.

Jessy Grizzle, the director of Michigan Robotics and the Elmer G. Gilbert Distinguished University Professor of Engineering, is especially interested in mounting a camera on Cassie and incorporating fast image processing on its extra chip, enabling the robot to use video to identify large changes in terrain visually. Ross Hartley, a doctoral student in Grizzle’s group studying electrical engineering and computer science, is collaborating with the team of Ryan Eustice, an associate professor of naval architecture and marine engineering who specializes in vision-aided navigation, to give Cassie a measure of sight.

This, Grizzle says, will prepare Cassie for Michigan’s “robot torture track” – the art installation known as the Wave Field. The field of three-foot earthen mounds totally destroyed one of MARLO’s knees last summer when the robot stepped blindly from the top of one hillock into the ditch.

“You’ve seen kids running freely over the Wave Field?” Grizzle asked. “That’s what this robot should be able to do.”

When the first model of Agility’s “Cassie” line arrived at U-M, co-founder and chief engineer Mikhail Jones met the robot here, helping Grizzle’s team to get the robot up and running with Agility’s software.

You’ve seen kids running freely over the Wave Field? That’s what this robot should be able to do.Jessy Grizzle
Tweet

Jones had helped to develop MARLO as a graduate student at Oregon State. He explained that Cassie’s sleek lines and more robust hardware marked the difference between making a few prototypes in an academic institution and making a commercial product: reliability and elegance were no longer constrained by research budgets, and customers demanded both.

“Hopefully it will keep the Michigan team up and running 99 percent of the time while they test new ideas and controllers,” said Jones.

Jones and Xingye “Dennis” Da, a doctoral student in Grizzle’s lab, hooked Cassie up to the overhead crane and pulled the robot up to stand. They attached the last pieces of casing, installed the battery and ran the calibration program. At last, the robot was ready for action.

They slackened the chain to drop Cassie down into an animal crouch, and Jones used the remote control to tell Cassie to stand back up. The robot tipped backward a little drunkenly, but because it is half the size and weight of the MARLO, Jones could catch it easily with one hand. This may save Grizzle’s team some ribbing on IEEE Spectrum’s video Friday, which gently mocked their struggles to stay upright while bearing MARLO’s 150 pounds when it slipped on uneven ground.

Not that they’ll have to become a human gantry for Cassie. Like a toddler, it’s built for taking spills. But that’s not to say it’s unbreakable. In fact, Grizzle’s team already mangled one leg in testing last week at Agility’s headquarters in Oregon (which Agility graciously repaired).

Cassie by the numbers

“We’re excited to get Cassie out into researchers’ hands because researchers tend to be the most abusive, so we will learn all the failure points and build better robots in the future,” said Jones.

Grizzle is happy to help. “We need to fall and break,” he said. “Most days, when we do robot experiments, we need to go back and repair the robot afterward! We’ll see how that goes with Cassie Blue.”

With powered ankle joints, one of Cassie’s big improvements over MARLO is that it can stand still. MARLO could only march in place, needing the motion to keep its balance. Another is the ability to twist its legs from the hip – MARLO’s could only swing forward and back or side-to-side. This will enable Cassie to turn in a controlled, predictable way.

And then there’s the power. Cassie is twice as strong as MARLO and half as heavy, effectively making the robot four times as powerful. “We’re not even sure what to do with all that power,” said Grizzle.

Within an hour of taking Cassie out of the box, the robot was ready to begin pacing the room, its steps like quieter echoes of MARLO’s steady march. It was stunning to see, knowing that MARLO had required a year’s worth of work before its balance and gaits were ready for a public premier. 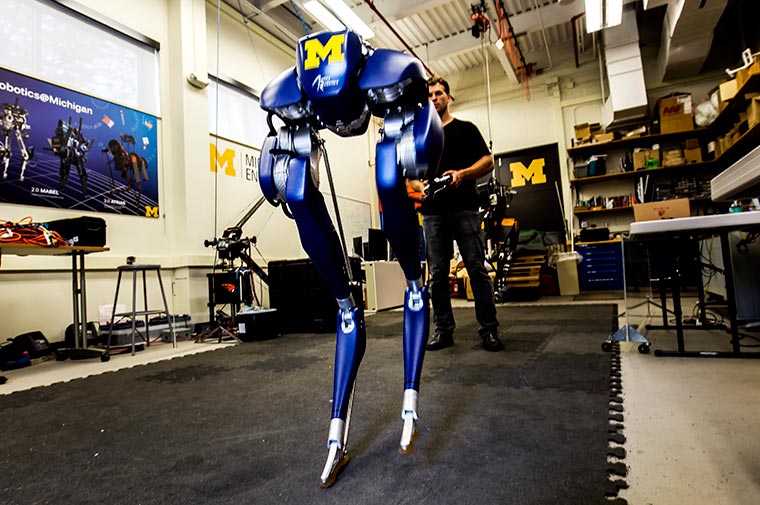 Agility built a fidget into Cassie’s code, as if the robot is looking around the room, to show that it is still on when standing still.

“Cassie is using the algorithms we developed for MARLO,” said Da, adding that Cassie’s code had modifications that enabled it to take rudimentary advantage of its powered ankles and hip joints.

MARLO had started with algorithms that could only balance in two dimensions, as its predecessor was attached to a boom that provided stability from the side. Grizzle’s team developed its first 3D controllers for MARLO.

“For now, MARLO is more stable,” Da added, but this will change as he and his lab mates write algorithms especially for Cassie Blue.