From rodent to robot 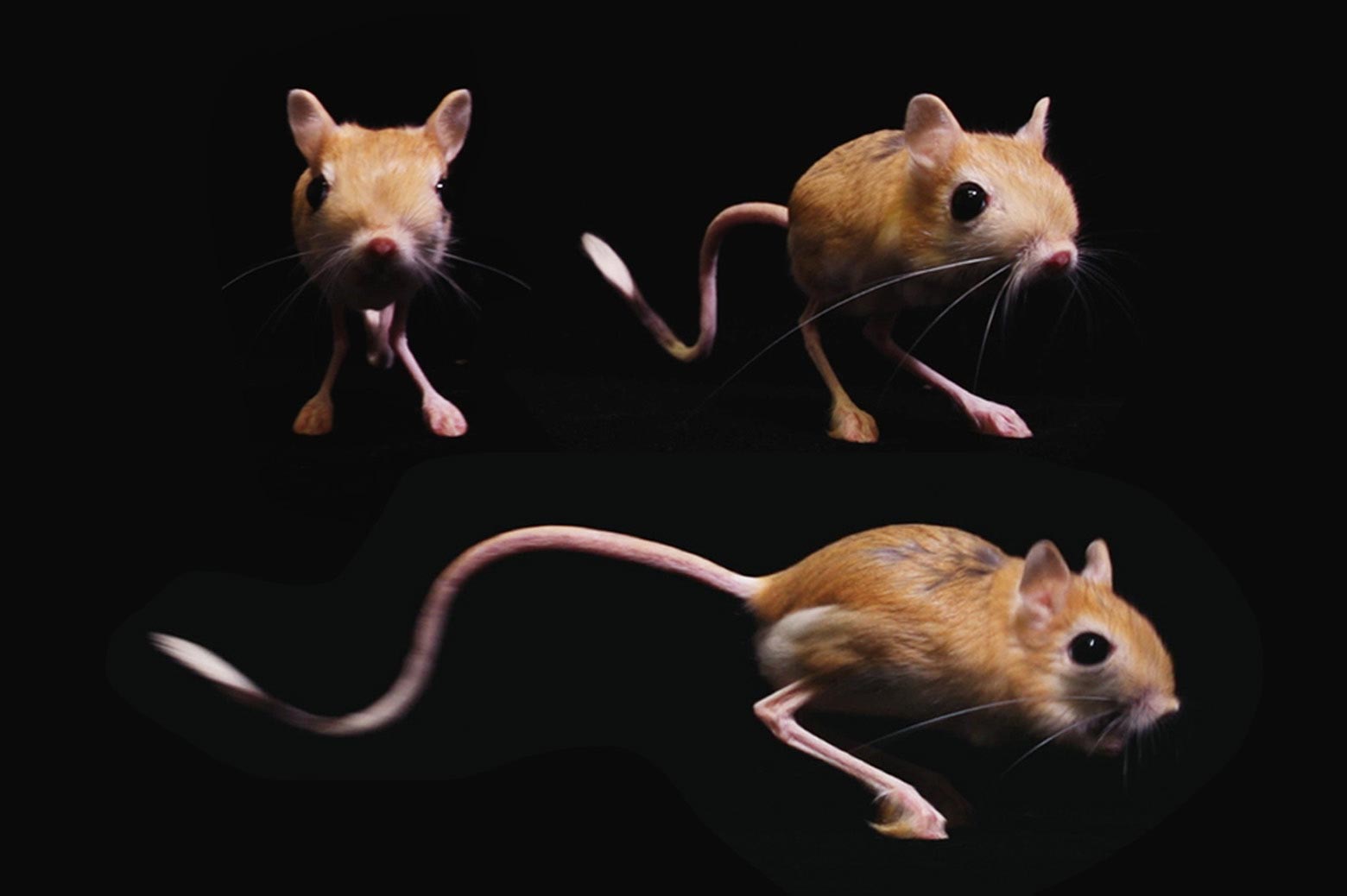 A frenetic, hopping rodent is giving University of Michigan engineers new ways to think about and design two-legged robots.

Biologists and engineers from U-M, Harvard University and the University of California, San Diego used information theory to, for the first time, quantify the entropy in an animal’s gait in three dimensions. The team’s findings, published in Nature Communications on Sept. 5, could help engineers make biomimetic robots that are tailored to specific environments.

“This work points at a new way of building a robot that may be useful in navigating desert environments or desert planets,” said Ram Vasudevan, U-M assistant professor of mechanical engineering and a co-author of the paper. “We want to try and build robots that are capable of thriving in all sorts of environments.”

He recalled a time when NASA’s wheeled Curiosity rover got stuck in the Martian desert.

“It dug a deeper and deeper hole,” Vasudevan said. “What if they had taken a look at how these rodents travel through the desert? Evolution has found a suitable solution several times over. Until now, we haven’t appreciated how useful a system it is in this context.”

The researchers explain their approach to studying the jerboa and its future applications to robotics. Video: Evan Dougherty, Michigan Engineering Communications & Marketing.

For biologists seeking to understand the ecological structure of animal communities, the findings also show how sudden changes in direction, gait and speed help the jerboa—a bipedal desert rodent—elude hungry predators and gain a competitive edge over their quadrupedal neighbors. The researchers compared the behavior of jerboas to jirds, which have four legs and are in the gerbil family.

Entropy is the answer

The jerboa is native to North Africa and Central Asia. Although bipedalism has evolved multiple times in rodents—including kangaroo rats and Australian hopping mice—jerboas are the only group to use three different gaits when moving on their long hind legs: hopping, skipping and running. They can leap more than half a meter high, which is about ten times their hip height.

Talia Moore, a postdoctoral research fellow in the U-M Department of Ecology and Evolutionary Biology, was tasked with characterizing the jerboa’s locomotion and comparing it to other bipedal animals.

IMAGE:  In order to study a jerboa’s gait, the researchers had the rodent run laps around a track with a strategically placed high-speed camera and force plate. Credit: Talia Moore

“When we put the jerboa on a force platform, every step had a different signature,” Moore said. “I thought, ‘This is so weird. It’s like they’re completely unpredictable and I’m unable to characterize it based on the techniques we have.’”

She consulted with Vasudevan. “I said, ‘Ram, I wish there was a way to measure unpredictability,’” Moore recalls. “He said, ‘There is.’”

They borrowed a metric of randomness from information theory—entropy. Entropy is a measure of the uncertainty of an outcome. With it, they developed a model that calculates the probability that the animal will move in a specific way.

Moore and her colleagues suspected that these herky-jerky movements help jerboas foil an aerial predator’s efforts to calculate an intercept course.

Jerboas vs. jirds in the wild and the lab

Since they wanted to see how these animals behave in their natural habitat, they traveled to northwestern China and designed a novel set of field experiments to study whether jirds and jerboas escape predators in different ways.

Combining their observations and their new model, they found that the jerboas were much more unpredictable than the jirds. Their maneuvers included momentary bursts of acceleration, kangaroo-like hopping, erratic zigzagging and acrobatic leaps.

To test whether the jerboa’s unpredictability truly corresponds to increased predator-evasion success, the researchers performed behavioral experiments that measured the animals’ tendency to seek shelter, which is called thigmotaxis.

Small foraging animals face a conflict between their needs to venture out for food and to stay under cover—to avoid becoming food. Due to this conflict, the amount of time an animal spends in an open area varies with its ability to evade predators. As evasiveness increases, the behavioral affinity to shelter, and so-called “open-field anxiety,” decrease.

During simulated predation trials, Moore and her colleagues observed that the bipedal jerboas explored the entire experimental enclosure, while jirds tended to remain near the walled periphery. She performed a second experiment in the lab with captive-bred animals that had never seen predators before. The results from both experiments suggest that bipedalism in rodents is associated with lower thigmotaxis and greater predator evasion in open settings.

Why this matters for robotics

Much of the research into robot locomotion involves smooth movement in low-variability environments. But these findings demonstrate some of the limits to that perspective.

For biomimetic robots to interact with the world, we’ll need to engineer unpredictability in motion.Talia Moore
Tweet

“The key insight here is it’s a big engineering challenge to engineer unpredictability this has shown that it’s a worthwhile pursuit,” Vasudevan said.

Added Moore, “If we want to make more biomimetic robots that interact with the world around us, we’re going to need to think about how to engineer unpredictability in motion.”

The paper is titled “Unpredictability of escape trajectory explains predator 2 evasion ability and microhabitat preference of desert rodents.” Co-authors in addition to Moore and Vasudevan are Kimberly L. Cooper of the University of California, San Diego, and Andrew A. Biewener of Harvard University. The study was funded in part by a Chapman Memorial Scholarship to Moore.