by Nicole Casal Moore
Michigan Engineering
June 15, 2017
In addition to being a distinguished educator and researcher, Lynch has a presence in the local startup community.| Short Read
Enlarge 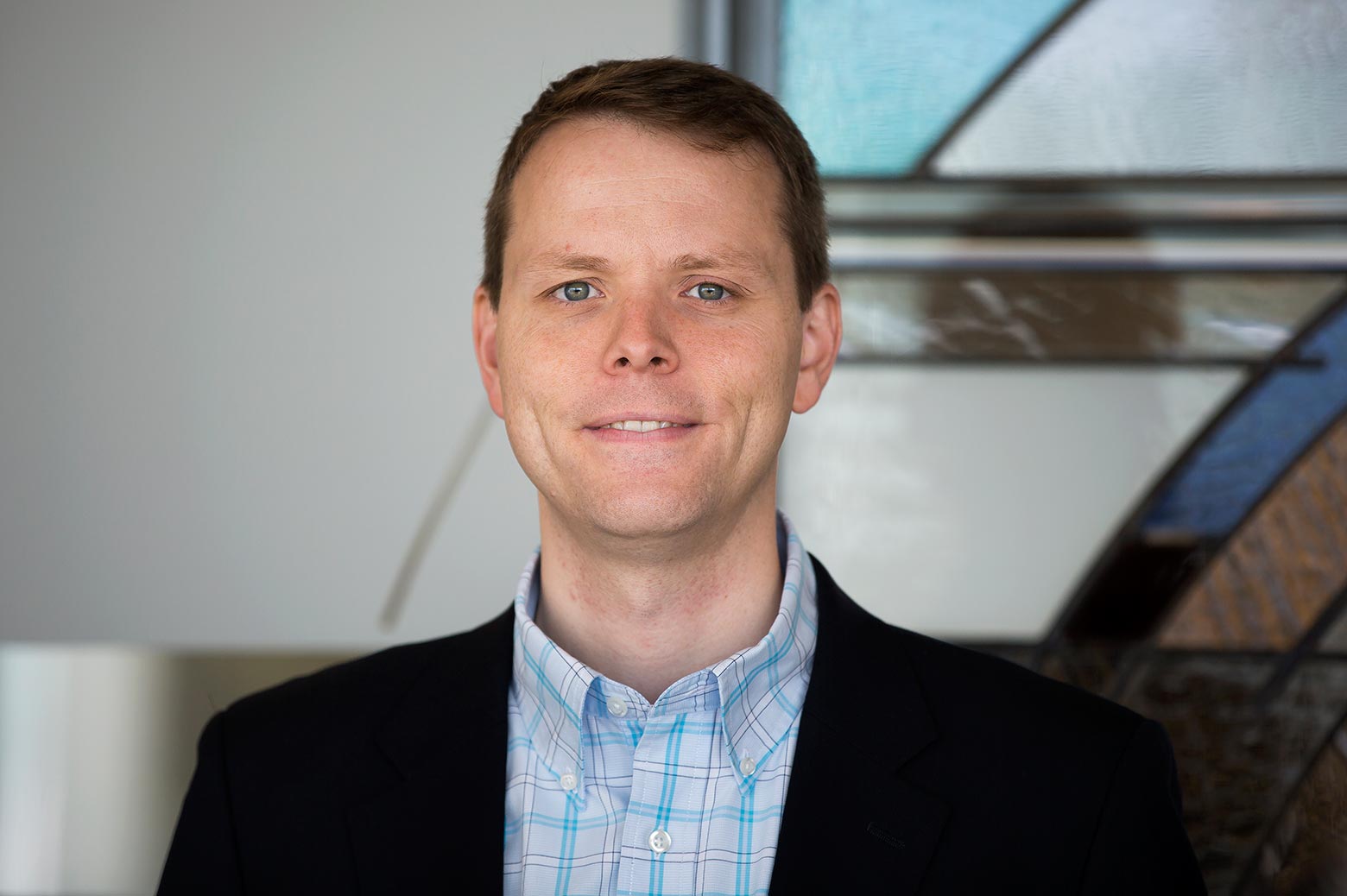 A boundary-crossing researcher who aims to make infrastructure more intelligent has been selected as the new chair of the Department of Civil and Environmental Engineering at the University of Michigan. 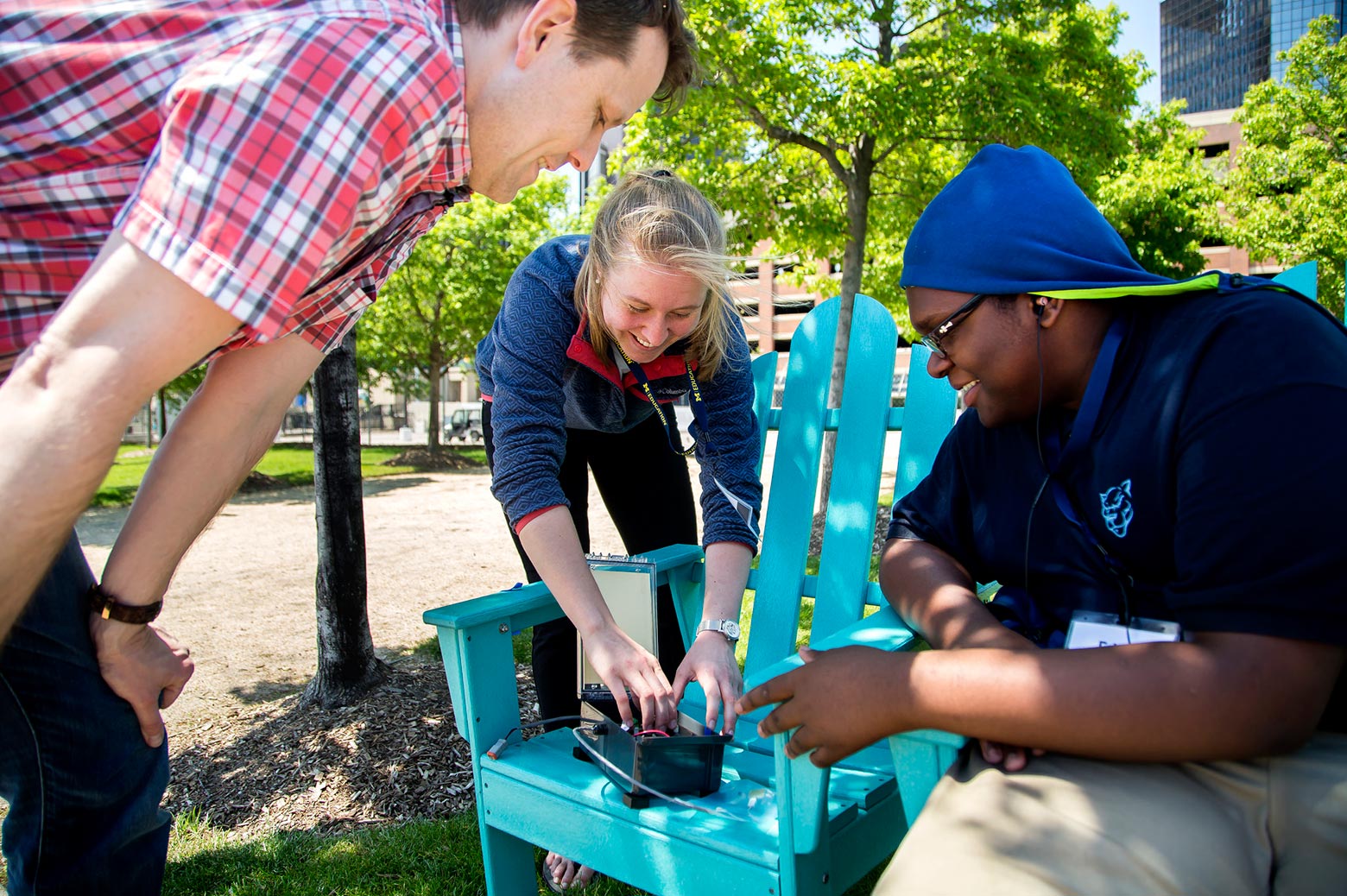 IMAGE:  Jerome Lynch, CEE professor and department chair; Katharine Flanigan, CEE PhD student; and Eddy Bassette, Voyageur College Preparatory High School junior, install a sensor kit along the riverfront of the Detroit River. Lynch and his team are working to put the power of engineering in the hands of those who live and learn in the city of Detroit, by giving them knowledge and access to sensors that record and track data, such as water temperature and population, in the form of compact kits known as “Sensors in a Shoebox.” Photo: Joseph Xu/Michigan Engineering Senior Producer, University of Michigan

Jerome Lynch will be the Donald Malloure Department Chair of Civil and Environmental Engineering beginning July 1. The U-M Board of Regents approved the appointment today.

Lynch, who has been on the U-M faculty since 2003, is known for working at the interfaces of traditional civil engineering and other engineering disciplines, such as electrical engineering, computer science and materials science. He directs the Laboratory for Intelligent System Technologies, which works to convert traditional civil infrastructure into more intelligent and reactive systems by integrating sensing, computing and actuation technologies.

As an example, he developed a nanostructured “sensing skin” for bridges that can reveal cracks and corrosion beneath the surface, or too small for inspectors to see. Popular Mechanics named him one of the magazine’s Brilliant 10 in 2009, and dubbed him “The Bridge Whisperer.” Other technologies from Lynch’s lab such as wireless monitoring systems for asset management are being commercialized through a U-M startup called Civionics that Lynch co-founded.

“With a distinguished academic track record crossing disciplinary boundaries, and a solid presence in the local startup community, Jerry brings new perspective into his CEE leadership role,” said Alec D. Gallimore, the Robert J. Vlasic Dean of Engineering. “I look forward to his innovative approaches to elevating the department’s impact.”

Lynch is also a highly regarded teacher with a history of public outreach. He has earned multiple “Professor of the Year” awards from the U-M student chapter of the American Society of Civil Engineers. And in 2016, he was recognized by the Knight Foundation for the “Sensors in a Shoebox” concept he developed with a faculty member in the School of Education. The project trains young people to use sensors and data analytics to track environmental conditions in city neighborhoods.

“I am extremely honored to have been selected to serve as chair of CEE,” Lynch said. “I am excited to lead this exemplary community of scholars, especially as we continue to be global leaders providing transformative solutions to the many complex grand challenges facing our society.”

Lynch holds three patents and is the recipient of the College’s 1938E Outstanding Junior Faculty Award, as well as the University’s Henry Russel Award.

He earned his PhD in in Civil and Environmental Engineering from Stanford. His appointment concludes a national search.

Dean Gallimore is also the Richard F. and Eleanor A. Towner Professor, an Arthur F. Thurnau Professor, and a professor of aerospace engineering.