On your car windshield, ice is a nuisance. But on an airplane, a wind turbine, an oil rig or power line, it can be downright dangerous. And removing it with the methods that are available today—usually chemical melting agents or labor-intensive scrapers and hammers—is difficult and expensive work.

That could soon change thanks to a durable, inexpensive ice repellent coating developed by University of Michigan researchers. Thin, clear and slightly rubbery to the touch, the spray-on formula could make ice slide off equipment, airplanes and car windshields with only the force of gravity or a gentle breeze. This could have major implications in industries like energy, shipping and transportation, where ice is a constant problem in cold climates.

The new coating could also lead to big energy savings in freezers, which today rely on complex and energy-hungry defrosting systems to stay frost-free. An ice-repelling coating could do the same job with zero energy consumption, making household and industrial freezers up to 20 percent more efficient. The coating is detailed in a new paper published in the journal Science Advances.

Made of a blend of common synthetic rubbers, the new formula marks a departure from earlier approaches to icephobic coatings, which relied on making surfaces either very water repellent or very slippery. 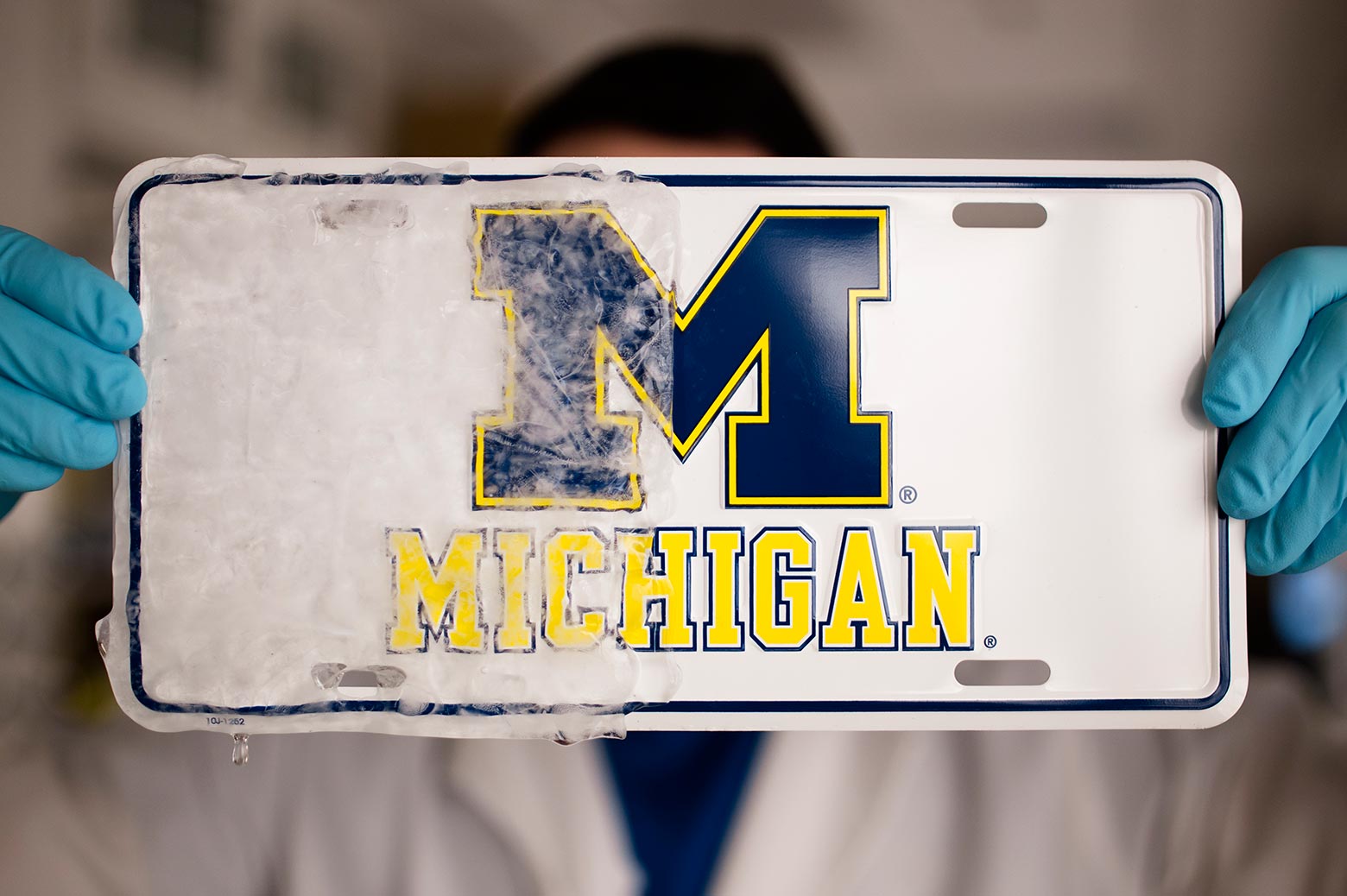 IMAGE:  Kevin Golovin, a graduate student in materials science and engineering at U-M, demonstrates a new rubbery material that can create ice repelling, or "icephobic," coatings on a variety of materials, such as windshields or ship hulls. In this photo, the "icephobic" coating was applied to the right half of a license plate, preventing ice from sticking to that half after being placed in a freezer. Photo: Evan Dougherty

“Researchers had been trying for years to dial down ice adhesion strength with chemistry, making more and more water-repellent surfaces,” said Materials Science and Engineering graduate student Kevin Golovin. “We’ve discovered a new knob to turn, using physics to change the mechanics of how ice breaks free from a surface.”

Led by U-M Materials Science and Engineering associate professor Anish Tuteja, the team initially experimented with water-repelling surfaces as well, but found that they weren’t effective at shedding ice. But during their experiments, they noticed something unexpected: rubbery coatings worked best for repelling ice, even when they weren’t water repellent. Eventually, they discovered that the ability to shed water wasn’t important at all. The rubbery coatings repelled ice because of a different phenomenon, called “interfacial cavitation.”

Golovin explains that two rigid surfaces—say, ice and your car windshield—can stick tightly together, requiring a great deal of force to break the bond between them. But because of interfacial cavitation, a solid material  stuck to a rubbery surface behaves differently. Even a small amount of force can deform the rubbery surface, breaking the solid free.

“Nobody had explored the idea that rubberiness can reduce ice adhesion,” Tuteja said. “Ice is frozen water, so people assumed that ice repelling surfaces had to also repel water. That was very limiting.”

The new approach makes it possible to dramatically improve durability compared to previous icephobic coatings, which relied on fragile materials that lost their ice-shedding abilities after just a few freeze-thaw cycles. The new coatings stood up to a variety of lab tests including peel tests, salt spray corrosion, high temperatures, mechanical abrasion and hundreds of freeze-thaw cycles.

The team has also found that by slightly altering the smoothness and rubberiness of the coating, they can fine-tune its degree of ice repellency and durability. Softer surfaces tend to be more ice repellent but less durable, while the opposite is true for harder coatings. Golovin believes that that flexibility will enable them to create coatings for a huge variety of applications. 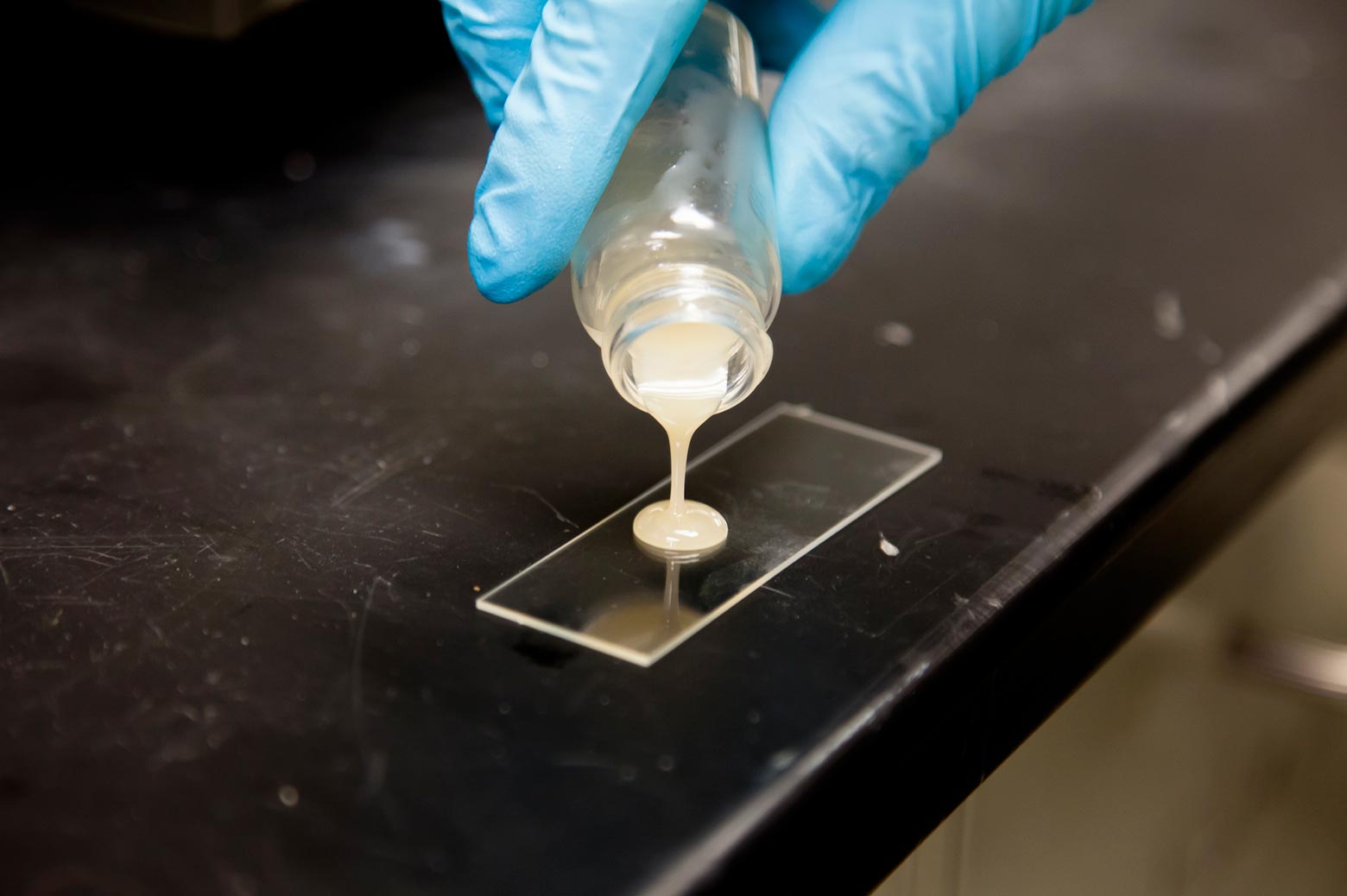 IMAGE:  Kevin Golovin, a graduate student in materials science and engineering at U-M, demonstrates a new rubbery material that can create ice repelling, or "icephobic," coatings on a variety of materials, such as windshields or ship hulls. Photo: Evan Dougherty

“An airplane coating, for example, would need to be extremely durable, but it could be less ice-repellent because of high winds and vibration that would help push ice off,” Golovin said. “A freezer coating, on the other hand, could be less durable, but would need to shed ice with just the force of gravity and slight vibrations. The great thing about our approach is that it’s easy to fine-tune it for any given application.”

In fact, the team has already designed hundreds of ice-repelling formulas. Some are rough to the touch, some smooth; some shed water while others don’t. But they all have one thing in common: ice slides off easily.

“I think the first commercial application will be in linings for commercial frozen food packaging, where sticking is often a problem. We’ll probably see that within the next year,” Tuteja said. “Using this technology in places like cars and airplanes will be very complex because of the stringent durability and safety requirements, but we’re working on it.”

The team received funding and assistance from the U-M MTRAC program, created to support new innovations that demonstrate high commercial potential. MTRAC is funded in partnership with the Michigan Economic Development Corporation’s Entrepreneur and Innovation initiative, which focuses on establishing Michigan as the place to create and grow a business by providing high-tech start-up companies with access to a variety of resources.

The paper is titled “Designing durable icephobic surfaces.” Funding was provided by the Office of Naval Research, the Air Force Office of Scientific Research, the National Science Foundation and the Nanomanufacturing Program (grant number 1351412).