For Rhonda Jack, a graduate student in chemical engineering, that device was intended to help doctors diagnose cancers more precisely and treat them more effectively. She saw it through the challenges of design, and in effort to publish the work, demonstrated proof after proof of its promise for understanding individual cases of cancer.

“The idea was a system that could process a large volume of blood in a single device and capture these rare cancer cells,” said Jack. 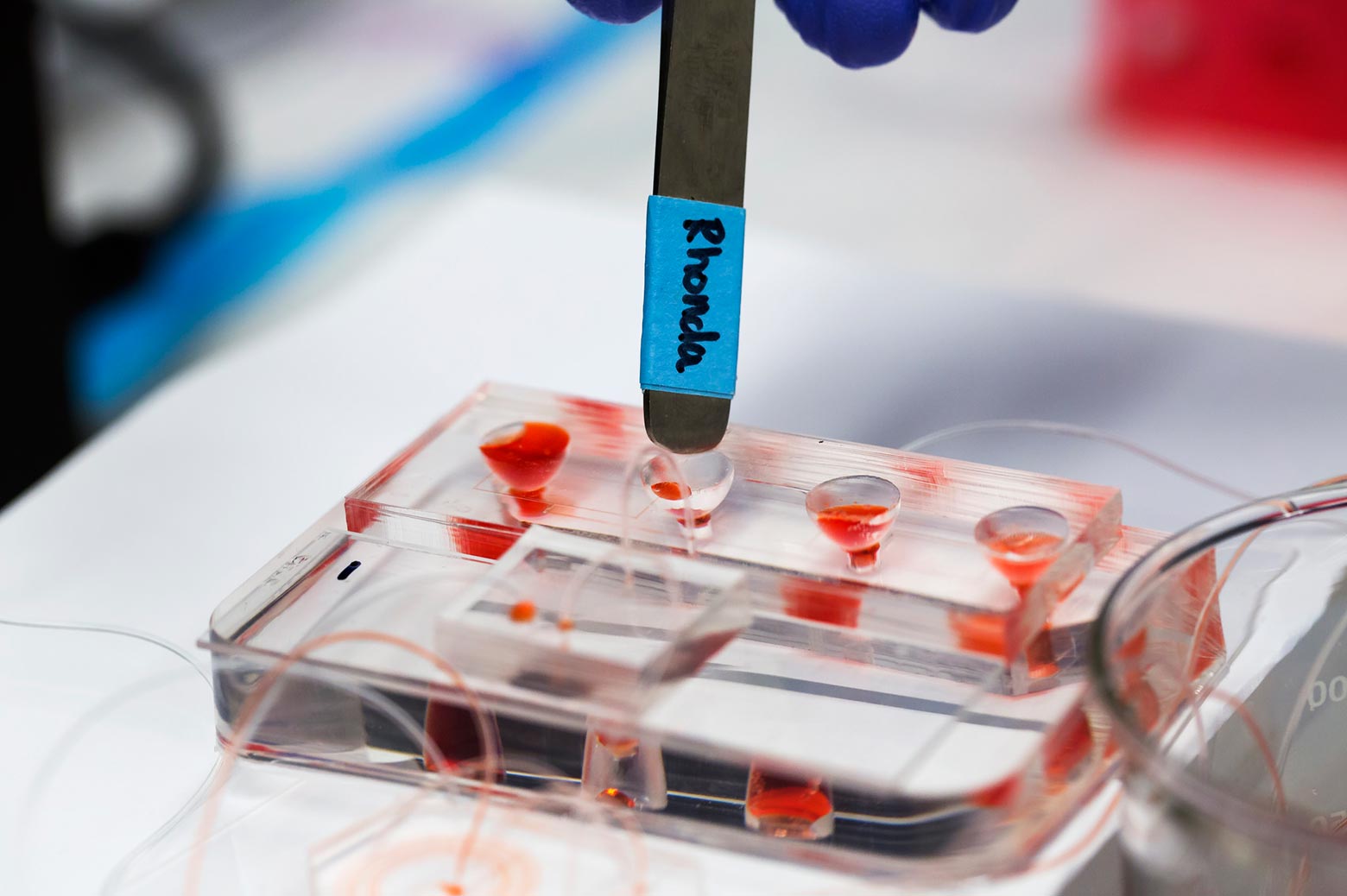 So-called circulating tumor cells are released from tumors and are believed to enable cancers to spread to other areas of the body. But if they can be captured from the bloodstream and studied, they can reveal how aggressive a cancer is and what drugs might be most effective against it.

Sunitha Nagrath, an associate professor of chemical engineering and Jack’s advisor, had a specific set-up in mind: she wanted a lab on a chip that could do two methods of extracting cancer cells back to back. One technique mixes magnetic beads into the blood, which attach to proteins found on the membranes of the cancer cells. Then, a magnet can pull the cancer cells away from the blood cells.

However, the magnetic beads don’t attach exclusively to cancer cells: they can link up with other cells, such as white blood cells, but they need a little more time to do it. To speed up the mixing process between the blood and magnetic beads and prevent bad attachments, Nagrath wanted to use a quick-and-dirty size-based sorting method to get rid of most of the blood cells before adding the magnetic beads.

The resulting contraption would deliver free-floating cancer cells that could then be studied individually with genetic tests. And it was Jack’s job, with help from chemical engineering postdoc Meggie Grafton, to make it.

“It was a nice idea on paper,” said Jack. And after three years of toil, it was a nice idea in practice. However, by then, the field of capturing circulating tumor cells had exploded to the point that getting the study into a peer-reviewed journal took almost as long.

In 2011, Jack threw herself into how to make the device. Grafton was very good at breaking down a problem into its parts and attacking it systematically, said Jack. They started with the size-based sorter, called an inertial sorter. The spiral shaped design means that the cells constantly rely on the fluid flow to keep them going around the bend, and the smaller cells are easier to push. As a result, they flow more quickly, drifting toward the outer side of the channel, while the larger cells lag at the inner side. 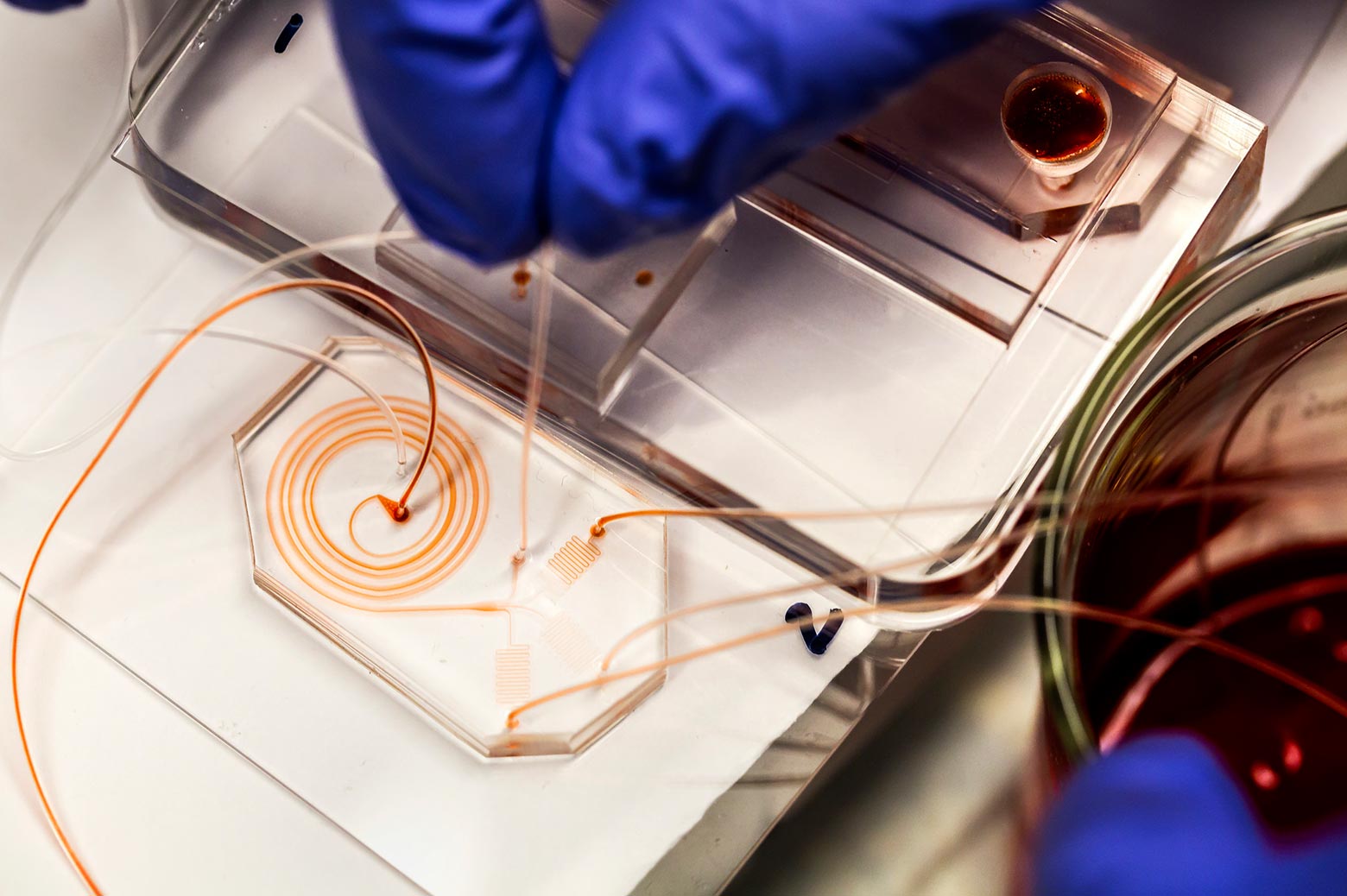 IMAGE:  A blood sample reveals the spiral pattern in the microfluidic chip as well as the tiny switchbacks where magnetic beads are mixed in. Photo: Joseph Xu

Jack and Grafton made 30 different versions of the inertial sorter and tested each one. They made four versions of the magnetic sorter. But the real test came when they tried to integrate both into one device.

“The flow rate in the inertial sorter was about eight times higher than what we needed in the magnetic sorter,” said Jack.

Having optimized both sorters to a high standard, they didn’t want to go back to the drawing board in the effort to make a single system. First, they thought that the mixer channel that distributed the magnetic beads in the size-sorted blood sample might be able to slow the flow, but there was too much mismatch.

They needed a place on the chip where the fluid could back up when it hit the bottleneck in the magnetic sorter. At first, they tried to make a nearly-flat reservoir, preserving the thinness of the chip, but this produced too much pressure on the large top and bottom walls of the chamber. These chips sprung leaks.

Eventually, Jack suggested a curved, paraboloid shape, which would distribute the pressure better. In the final design, four of these vertical reservoirs funneled the pre-sorted, magnetically tagged blood samples into the magnetic sorter. 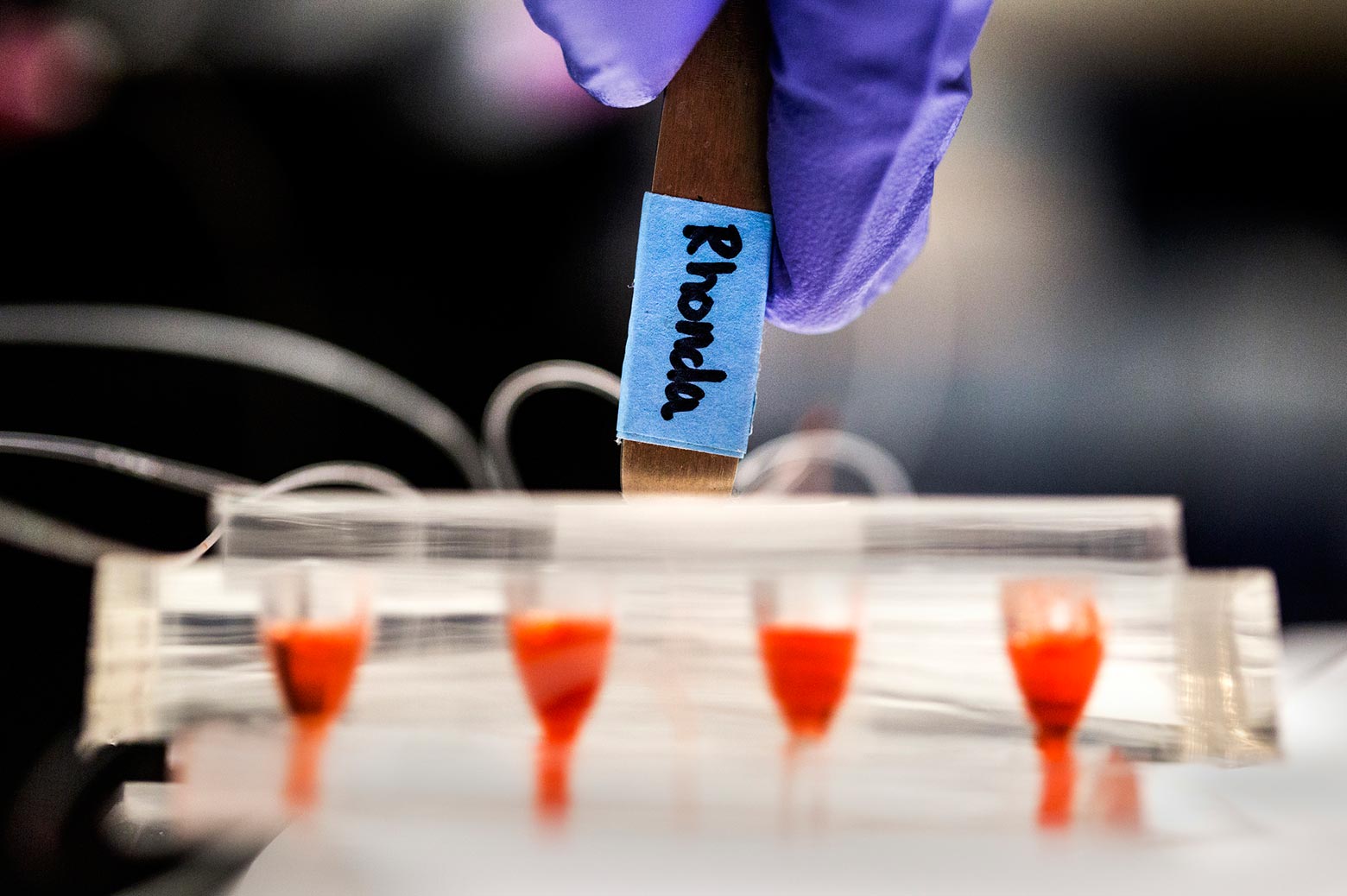 “Very few had achieved this level of purity with circulating tumor cell sorting before,” said Jack.

Unfortunately, others had achieved that level of purity with other methods, and the journals were ramping up their expectations for what researchers with new cancer cell capture devices had to prove.

At this point, the engineering problem was done, and Grafton had moved on to become a development engineer at a New Jersey engineering firm. Jack and Nagrath submitted a paper on their new device to a top journal read by scientists of all stripes, the Proceedings of the National Academy of Sciences.

It was rejected. The team had to show that they could definitely capture cells from patient blood — not just blood samples spiked with cancer cells.

For years, Nagrath has worked closely with Diane Simeone, the Lazar J. Greenfield Professor of Surgery. Simeone gave Nagrath and Jack blood samples provided by patients with pancreatic cancer. The device was able to pull out the cancerous cells.

Further journal submissions demanded that they analyze the cells. So, Simeone suggested analyses that show which genes are present in the cancer cells. With these relatively basic tests, Jack was able to see some genetic markers that indicate whether a cancer is spreading to other areas of the body or not.

In all, Jack and Nagrath re-submitted the paper to several journals. Each rejection was a blow to Jack, but she describes Nagrath as a “pillar of strength.”

“She was the one who always had that energy: ‘OK, let us do it again, let us find a way,’” said Jack. 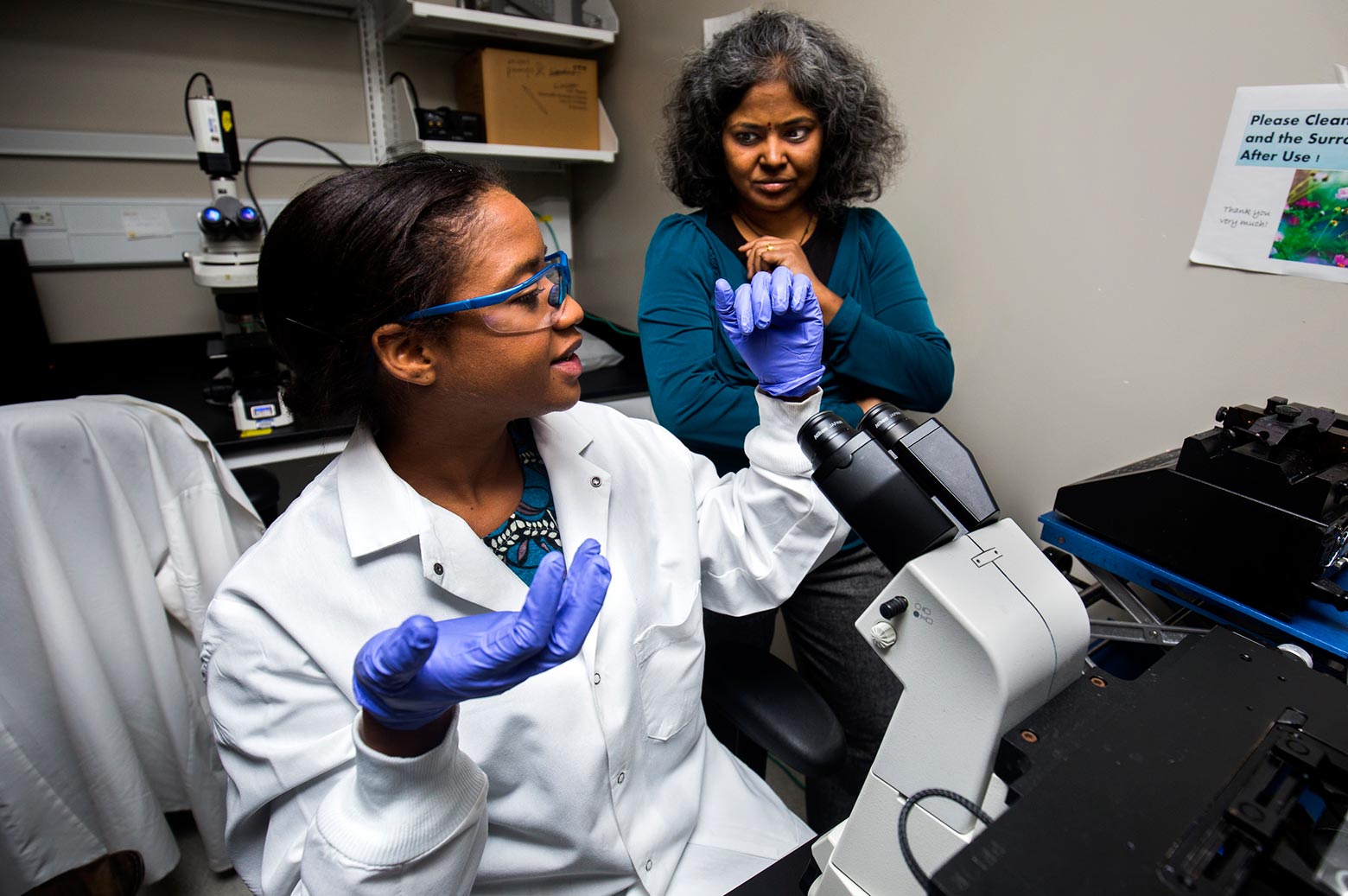 IMAGE:  Jack and Nagrath discuss the results of cell analysis in the microscopy room of Nagrath’s lab. Photo: Joseph Xu

Two years after the initial submission, the editor of Advanced Science, a new journal from the publisher Wiley, sent positive feedback with criticisms that Jack and Nagrath knew they could address. They resubmitted, and the paper was accepted at last.

Part of the reason why the paper faced so many rejections is that Nagrath is not content to publish in journals that are mostly read by other people working on lab-on-a-chip devices. She wants her work to be seen by other cancer researchers, who could make good use of her devices in their own research, so these journals demanded evidence that cancer researchers should be interested in her device.

While Advanced Science is new, Wiley is aiming to make it a flagship journal, in attempt to rival the interdisciplinary behemoths Nature and Science. It’s not such a risk for Nagrath to try out this new journal — she busted onto the scene with a paper in Nature on her post-doctoral work, and has since followed up with many papers in top journals.

Jack is just beginning to make her reputation. Even so, publishing in a new journal is a risk she’s willing to take.

“I think publishing in any quality journal has the potential to reach the interested readership, especially considering tools like Google Scholar Alert that notify users about new work based on keywords,” she said.

One of the thorniest challenges that Jack faced was also one of the most mundane. It is possible to tag cancer cells and blood cells with fluorescent molecules so that they can be distinguished from one another. 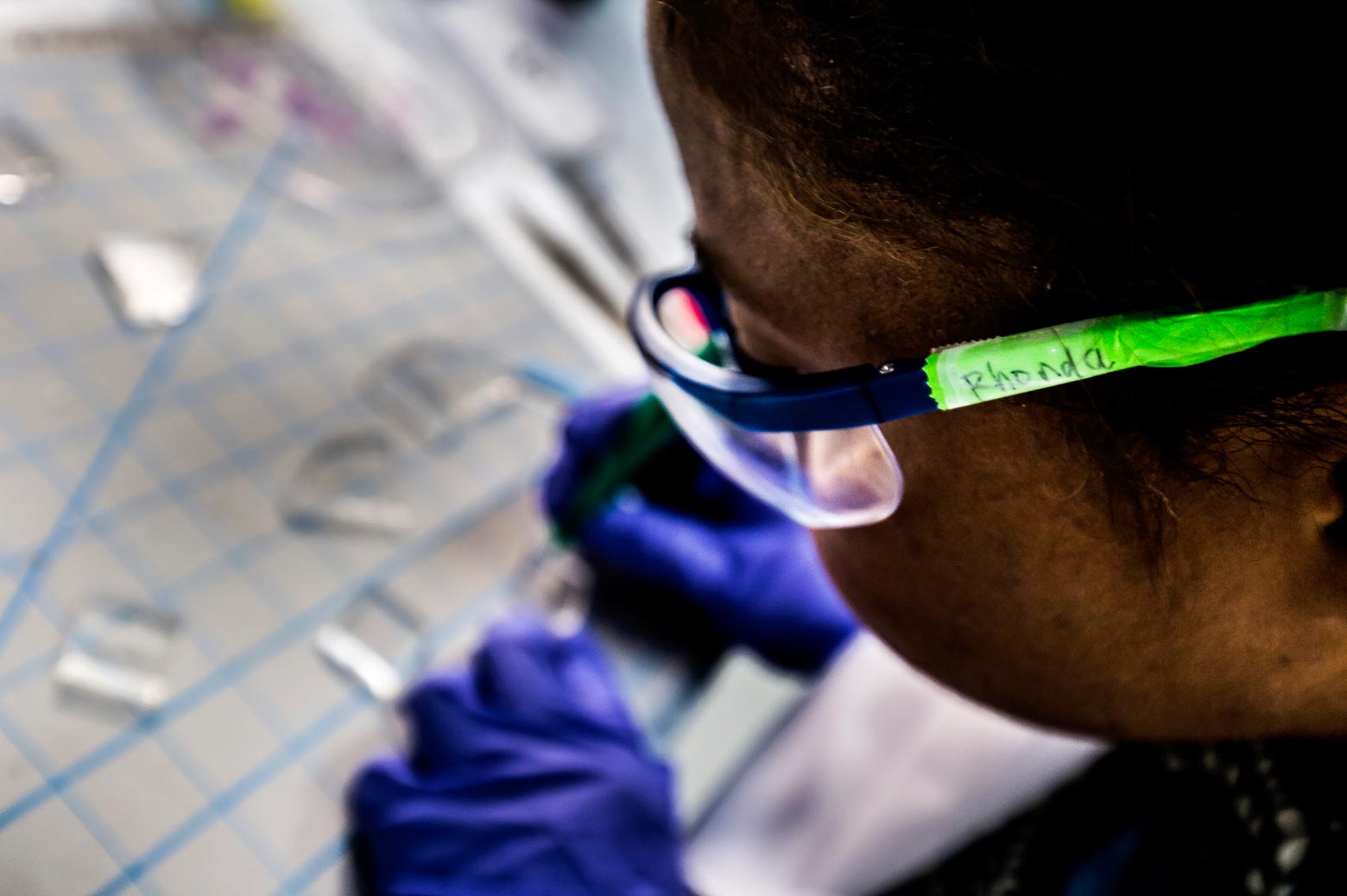 It’s quite simple in principle: buy some tags connected to molecules that will bind with your target cell, expose the cells to the tags, and you’re good to go. Except for Jack, it wasn’t working for her patient samples. Many cells were coming up as both cancer cells and white blood cells.

She couldn’t understand what was going on. She tried adjusting the amount of time that the dye sat with the cells before testing, the treatment that allowed the dyes to get into the cells, and other steps. Nagrath, too, was annoyed that the research was being held up by a problem that had a definitive solution in the field.

After weeks of effort, Jack bought tags from a different supplier, tagging just one marker on the surface of the cancer cells rather than a mixture of markers. Finally, the white blood cells and cancer cells were distinct in the microscope images.

This particular drama happened in the summer. For Jack, who comes from Trinidad, winters could be challenges in themselves. When she misses her home and family, video chats help to cheer her up.

While the daily challenges of research sometimes got under her skin, Jack was particularly grateful that she had been raised in a spiritual family. It reminded her to step back and think about the bigger picture, both in her life choices and in her approach to solving problems in the lab.

“It goes beyond just running experiments or finding a cure for cancer,” she said. “I have to pursue everything with quality and integrity.”

While the repeated rejections from journals were disheartening, the follow-up experiments they demanded allowed Jack to work more closely with Simeone, sitting in on some of her lab meetings.

“I am inspired by how quickly she troubleshoots issues and how she gives insightful suggestions about answering research questions. She is also a brilliant and careful listener and pays attention to tiny yet important details,” said Jack.

Jack successfully defended her thesis in November and will graduate in May 2017. She’s considering following in Grafton’s footsteps and seeking out a job in industry. She wants to refine her skills in managing research projects, perhaps managing research labs. Nagrath would like to give her that kind of responsibility here at U-M; she thinks Jack could help establish a service lab that will analyze individual cancer cells for oncologists in U-M’s Comprehensive Cancer Center. 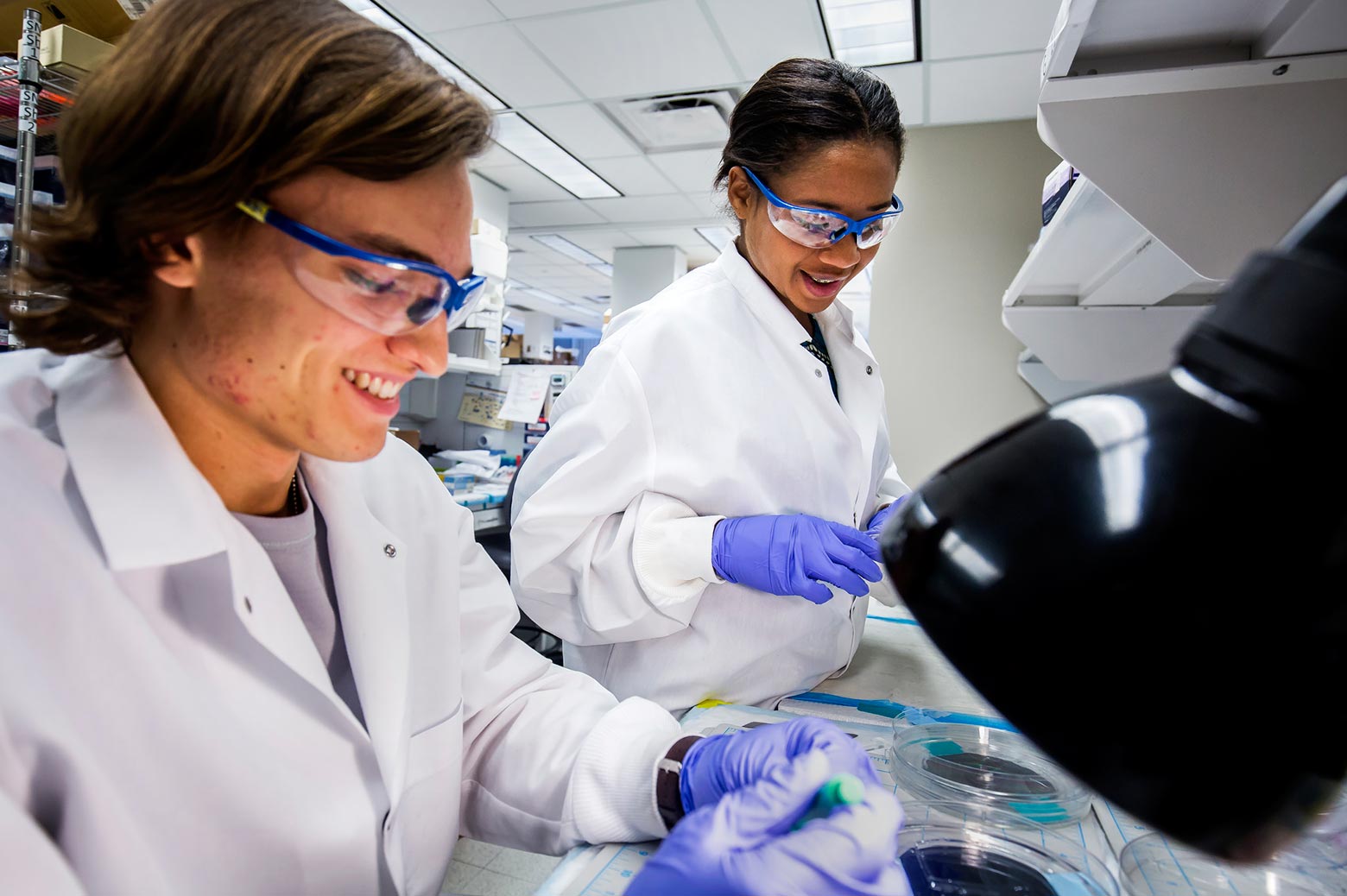 Eventually, Jack hopes to take her skills back home, bringing the “liquid biopsy” method championed by Nagrath to cancer patients in Trinidad.

“It’s not entirely far-fetched because right now they’re in the process of developing a huge new cancer center back home, millions of US dollars have been invested in it,” said Jack.

Looking back on what she has accomplished as a graduate student, Jack is now confident that she could make a difference in how cancer is treated on a national scale.