The Hubble Space Telescope has been capturing breathtaking images of the cosmos since the early 1990s, and for most of that time, Thomas Griffin (BS AOSS ’78, MS AS ’80) has been working behind the scenes at NASA to help keep the observatory fully operational. Here he chooses his favorite Hubble images—from a detailed close-up of one of our planetary neighbors to a tantalizing glimpse of the galaxies that lie billions of light-years away. 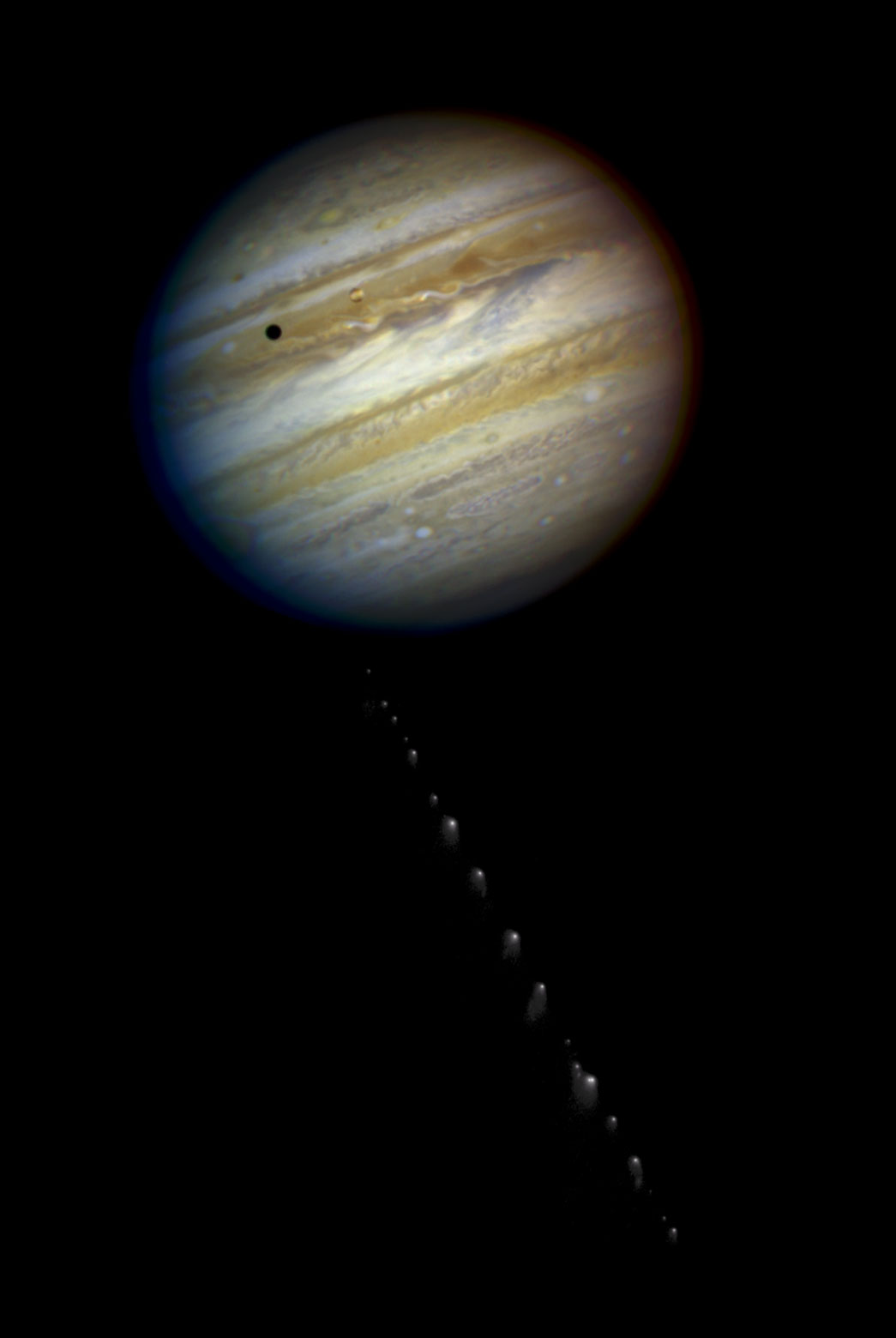 Hubble launched to great fanfare in 1990, but within weeks astronomers noticed a problem with the telescope’s optics that compromised the quality of its images. It was a tough time for the Hubble team.

“But we didn’t give up on it. We went out there and came up with a solution and with the help of the shuttle and the astronauts we implemented it,” said Griffin. “And after a lot of hard work from our talented and dedicated team, the fix then worked beyond anyone’s expectations.”

Those corrective optics were installed in December 1993, just months before a daisy chain of comet fragments collided with Jupiter. The Shoemaker-Levy 9 comet collisions became a major news story in July 1994, and Hubble’s images of the event—including the image above—helped grab the world’s attention.

Not only are the images stunning, they also had important scientific value for astronomers, said Griffin. “They provided the first direct observations of an extraterrestrial collision of solar system objects.”

Beyond that, the Hubble images of Shoemaker-Levy 9’s collision with Jupiter also demonstrated that the space telescope was fully functioning and capable of delivering incredible images of our universe. 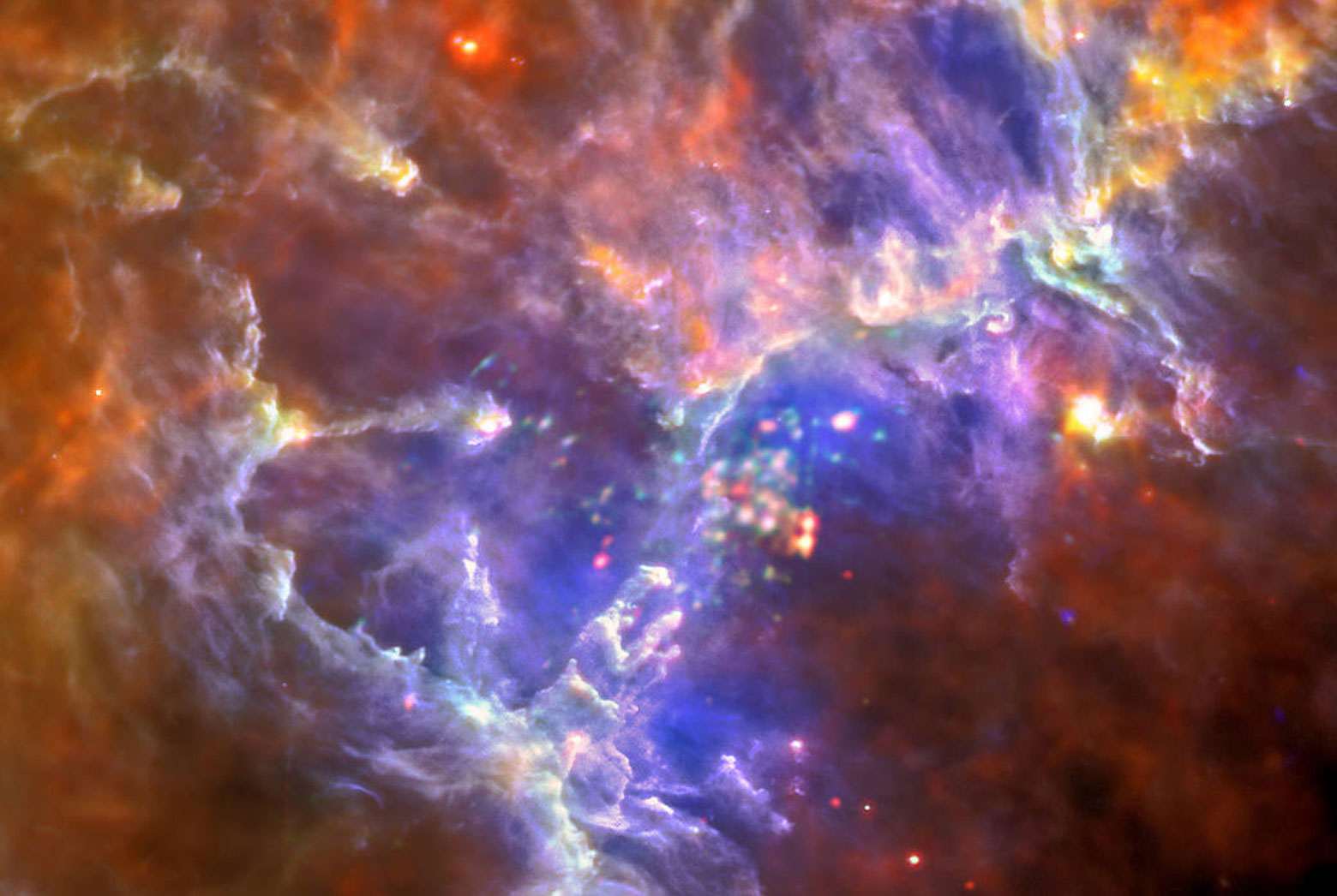 Hubble was in the news regularly in the mid-1990s. “From the abundance of data, our scientists were able to release new discoveries to the public on the order of about once a month,” said Griffin. A year after the telescope witnessed the dramatic events on Jupiter, it captured an image that remains iconic to this day: A close-up of the Eagle Nebula, a cluster of stars some 6,500 light-years from Earth.

At the center of the nebula there is a gas cloud that takes the form of three gigantic columns—dubbed the Pillars of Creation. Gravity can pull the gas together, potentially triggering nuclear fusion and forming brand new stars.

“It’s just phenomenal,” said Griffin. “If there’s a single signature image captured by Hubble that everyone has seen, it’s probably the Eagle Nebula.” 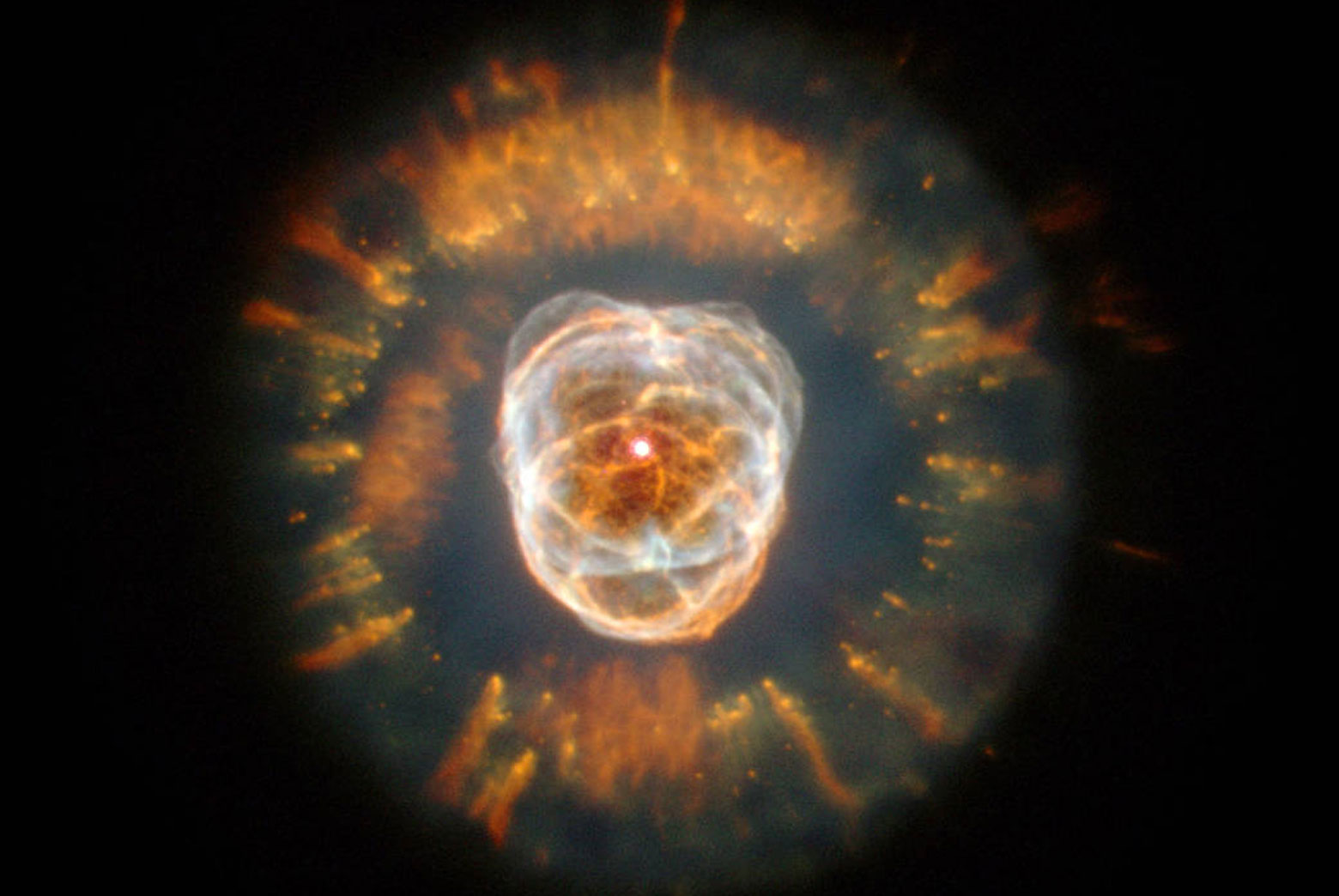 After notching up almost a decade in space, Hubble was beginning to show its age. Onboard gyroscopes keep the telescope steady while it captures images, but in 1999 some of them began to malfunction. “Like all fine precision instruments, they do wear out,” said Griffin. “We knew they were a life-limiting item and we always had spares on the ground to replace them if necessary.”

By December 1999, the telescope was no longer able to function properly. NASA launched another servicing mission – its third – and successfully fixed the problem.

Hubble set its sights on the heavens once more, and soon captured this image of the Eskimo Nebula, formed in the aftermath of the death of a sun-like star, and named because of its resemblance to a face surrounded by a fur parka.

Astronomers have known about the Eskimo Nebula for centuries – William Herschel first discovered it in 1787. But the Hubble image shows a level of detail that earlier generations of astronomers would have found astounding.

“Who can’t like the Eskimo Nebula, right?” said Griffin. “Of all the images I’ve picked, this is one I added really because I just like looking at it. In fact, it’s an image that I have up in my office.” 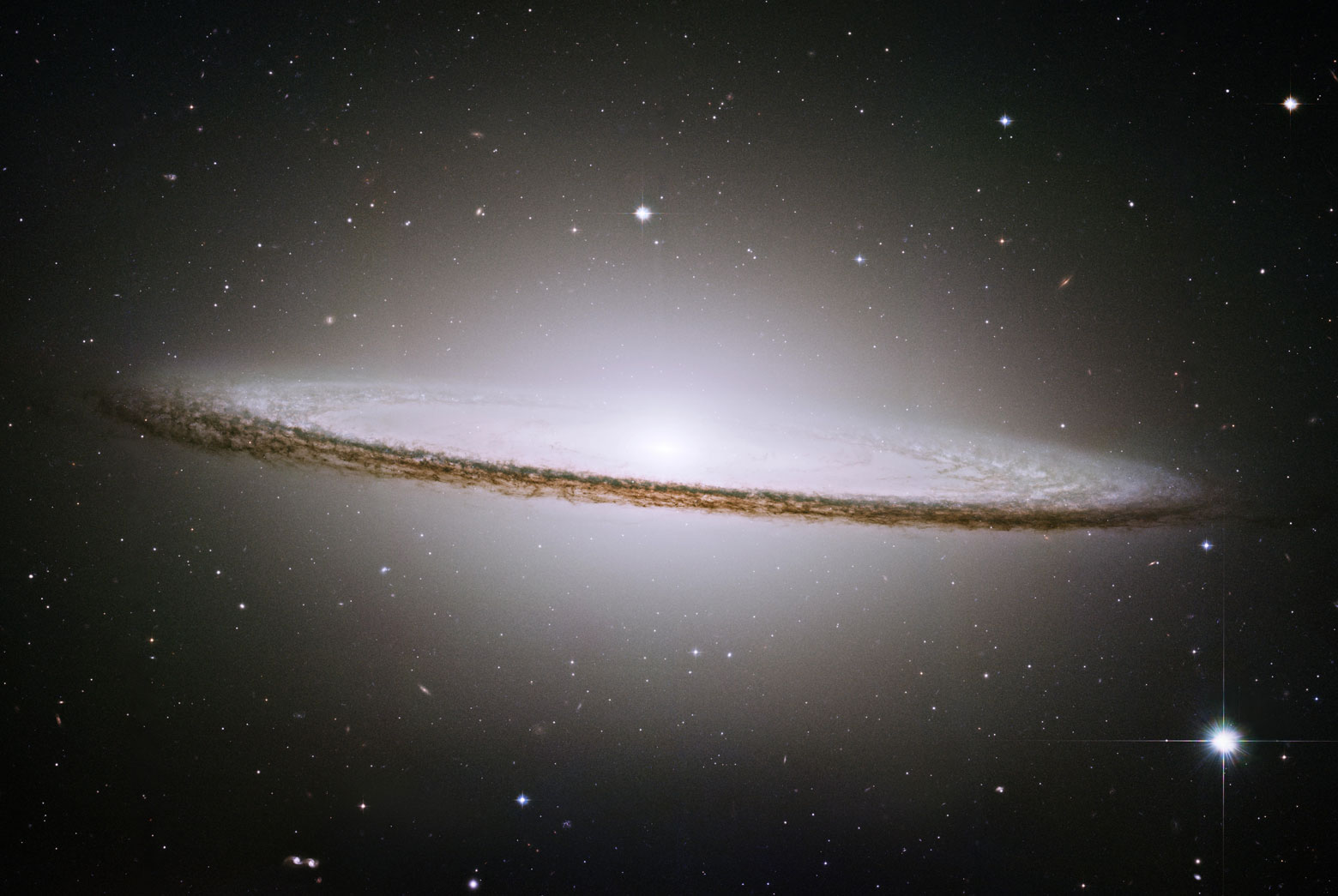 Some 30 million light-years from Earth lies a galaxy (Messier 104) that is tilted almost exactly edge-on. As such, its 50,000-light-year-wide circular disc takes on the appearance of a flat dish – or the wide brim of a sombrero.

In 2003, Hubble captured this extraordinary image of the M104 – the Sombrero Galaxy. “The galaxy being edge-on makes for a neat image, no question,” said Griffin. It’s an image that helps the average viewer appreciate the shape of the spiral galaxies that pepper the heavens.

“That’s where it’s useful that Hubble is an optical telescope, capturing images mainly in the visible wavelengths,” said Griffin. “There are many other missions producing great science, but reaching out to the public is harder if you’re working with an X-ray telescope, for instance.”

He said the Hubble team is fortunate because the images the space telescope captures show astronomical objects essentially as they would appear to a nearby human observer. “Everybody wants to hear about Hubble – it’s a real success story.” 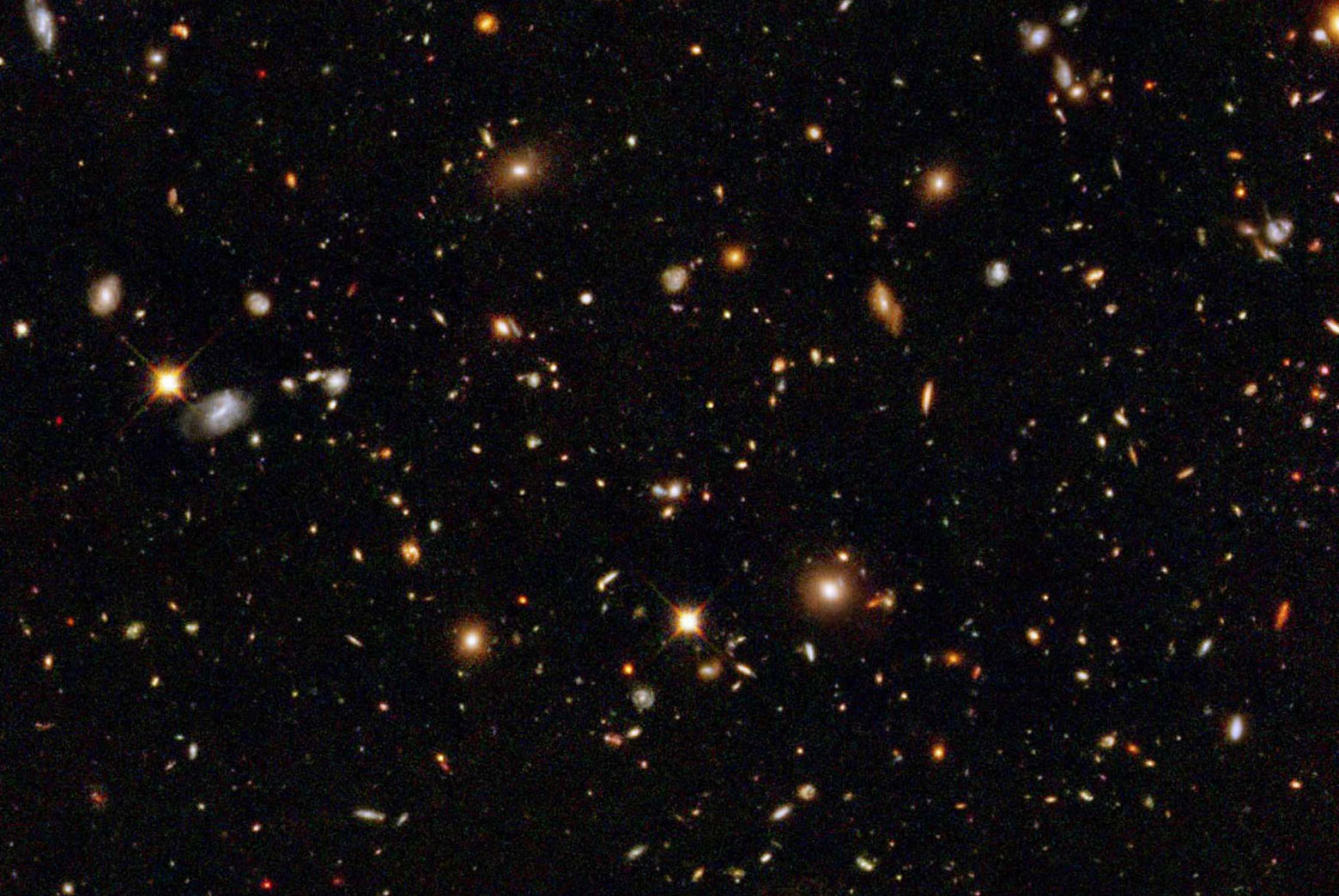 Later in 2003, the Hubble team decided to do something no one had done before: Stare at a region of space that seemed to be completely empty. “It was tough to get it approved, basically they were saying, ‘Let’s point Hubble at a section of the sky that we’ve seen no photons coming from,’” said Griffin.

The team chose a tiny “dark” spot in the constellation of Fornax. Over the course of four months, beginning on September 24, 2003, Hubble repeatedly stared at the dark region. It took 800 exposures – a total exposure time of 11.3 days – and revealed something astonishing. “Lo and behold, there are as many galaxies there as there are anywhere,” said Griffin. They are just very far away and very dim.

In fact, the galaxies in this image are about 13 billion years old, which means they existed just a few hundred million years after the Big Bang. Because they are so old and so far away, the image has been dubbed the Ultra-Deep Field.

“Peering into the Ultra-Deep Field is like looking through an eight-foot-long soda straw,” said Griffin. It involves ignoring all the easy-to-see objects nearby and focusing exclusively on tiny, distant objects. “This image is about taking a step back and realizing how abundant the universe is,” he said. “It’s almost amazing to comprehend.” 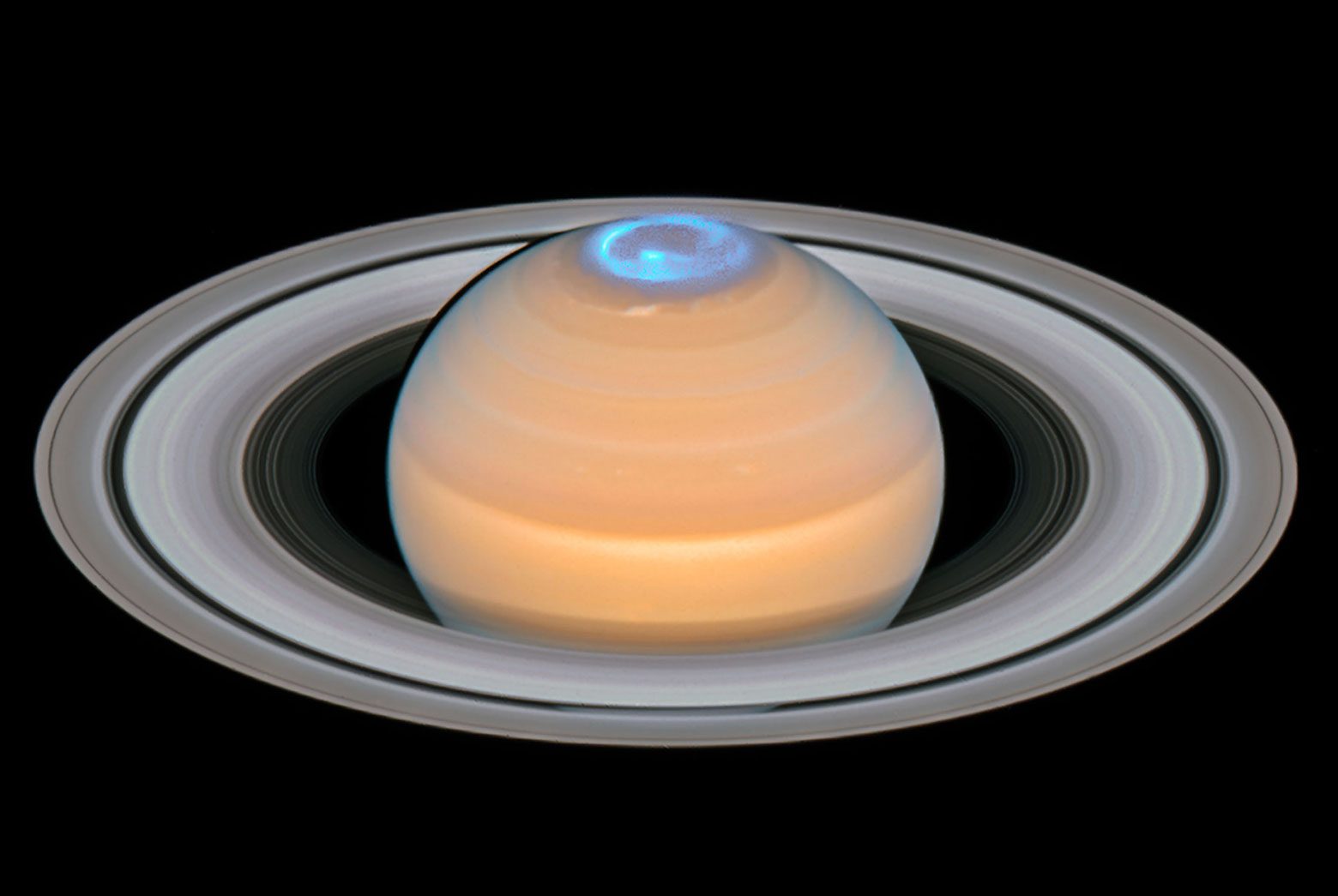 Visit the higher latitudes on Earth at just the right time and you might be lucky enough to witness the aurora – the northern or southern lights. “Growing up in northern Michigan, watching aurora events in the night’s sky are some of my most vivid memories,” said Griffin. “It helped develop my interests in natural sciences.”

But Earth is not the only planet where the poles light up. In January 2004, Hubble captured images of Saturn’s aurorae. The aurorae appear at both its north and south pole.

Earth’s aurorae occur because of the interaction between particles from the sun and nitrogen and oxygen in Earth’s upper atmosphere—a process that typically generates green and blue light. On Saturn it’s glowing hydrogen that produces aurorae. They appear ghostly blue in the Hubble image because the display has been captured in ultraviolet light.

“Isn’t physics nice that it’s predictable?” said Griffin. “We have this flow of highly charged particles from the sun that bombards us, and that energy is going out and affecting all of the planets. It doesn’t minimize the uniqueness of Earth, but it does show that the other planets are influenced by the same physical processes.” 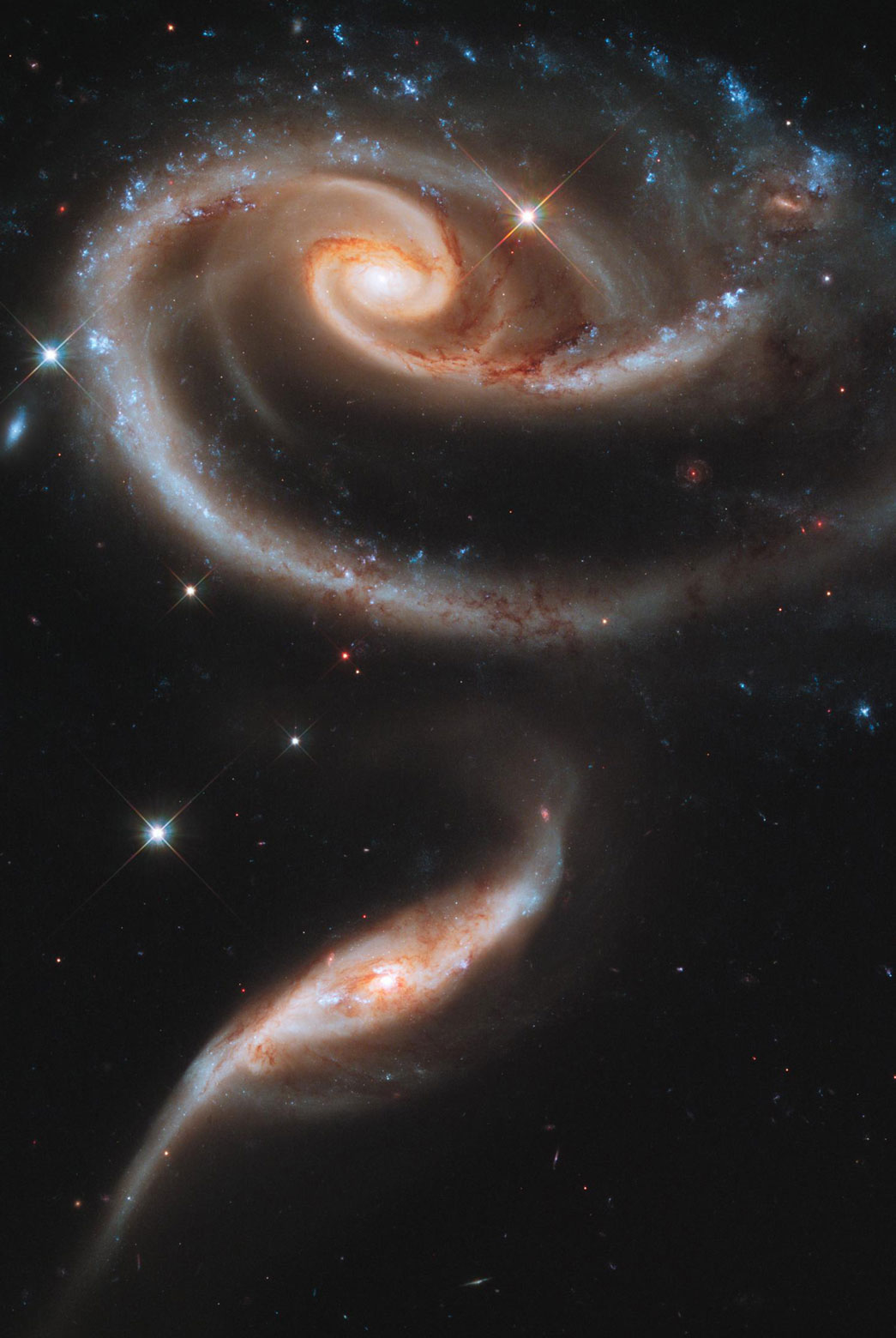 By December 2010, Hubble was approaching its 21st anniversary in space. To mark the occasion, astronomers turned the space telescope toward the beautiful rose galaxies. “Like with the Eskimo Nebula image, I chose this one because it’s just a very nice image,” said Griffin.

The gravitational pull from UGC 1813, the official name for the lower of the two galaxies in the image, has caused a shape distortion in the spiral galaxy above – UGC 1810. This distortion gives UGC 1810 the appearance of a rose flower, an effect heightened by the rose pink colors in the image.

“You can just let your mind go imagining how these galaxies interact and are drawn together,” said Griffin. “There’s just a massive amount of energy there. And then at a deeper level we know that the energy we’re seeing there is less than 5 percent of the whole universe, because we now know about dark energy and dark matter. What’s going on in the parts we can’t see?” 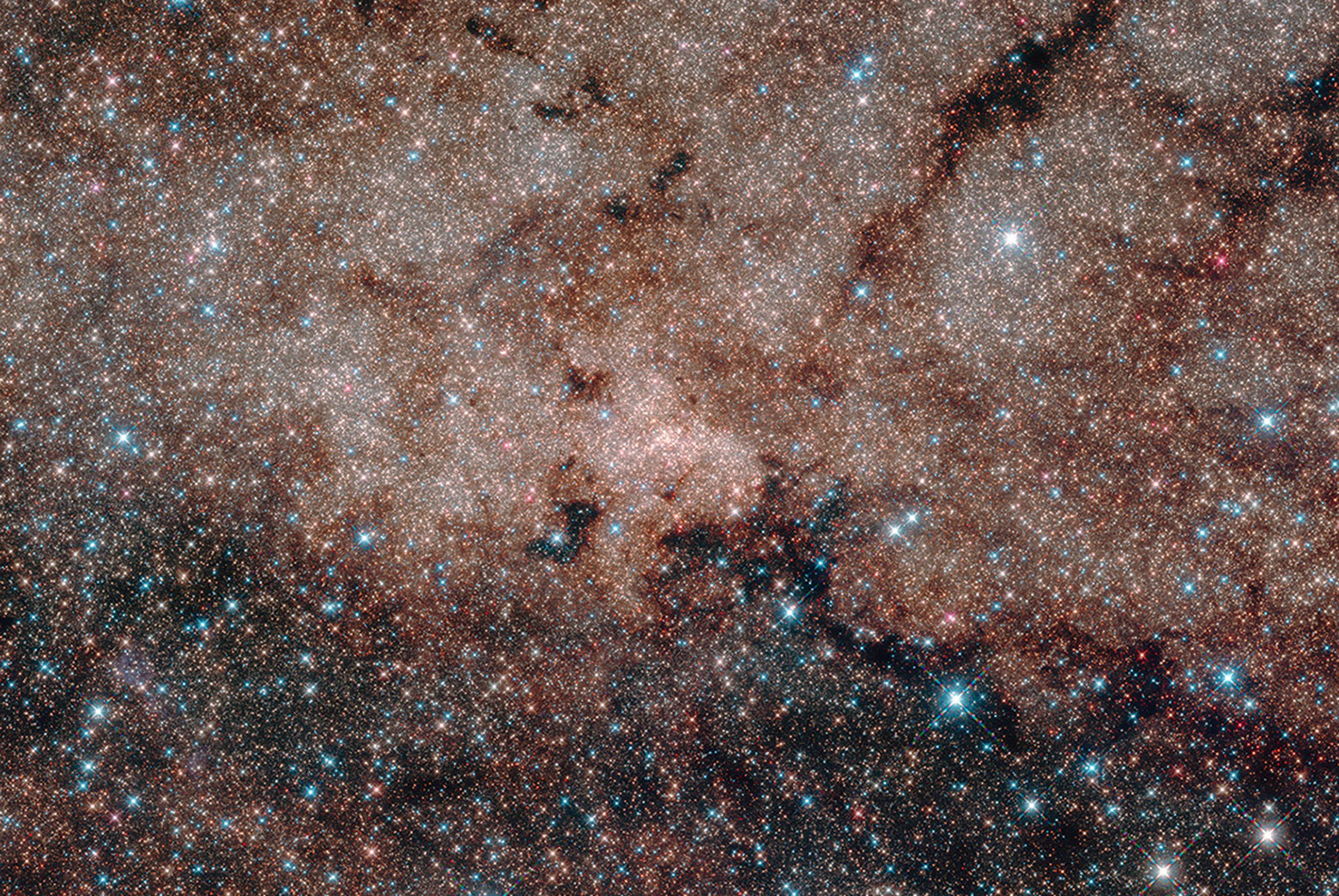 This year marks the 28th year since the launch of Hubble. The day is rapidly approaching when NASA will launch its successor, the James Webb Space Telescope. But Hubble should continue to provide astronomers with valuable data for years to come. In 2018, for instance, astronomers released an image of the ancient hub, or “bulge,” that lies some 26,000 light-years away at the center of our Milky Way galaxy.

There is such a high density of stars in the Milky Way’s bulge that it’s always been a difficult region to study. Images like this one reveal that the bulge is home to both old stars, which show up red in the image, and younger stars, which appear in blue. This information is allowing astronomers to firm up their ideas on when the bulge formed, revealing new information about the ancient history of our galaxy. 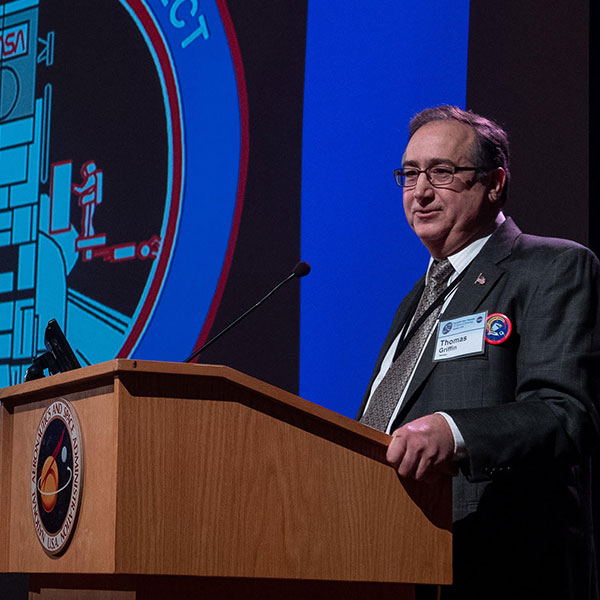 Thomas Griffin (BS AOSS ’78, MS AS ’80) joined NASA in 1990 as the Hubble Space Telescope (HST) shuttle carrier development manager, and between 1997 and 2010 was the HST observatory manager. Between 2010 and 2016 he was deputy program director in NASA’s Astrophysics Projects Division and is now observatory project manager for NASA’s Wide-Field Infrared Survey Telescope (WFIRST).

Griffin has received several awards during his career, including two NASA Exceptional Achievement Medals and NASA’s Silver Snoopy Astronaut Award for his support of astronaut training for Hubble Servicing Missions.