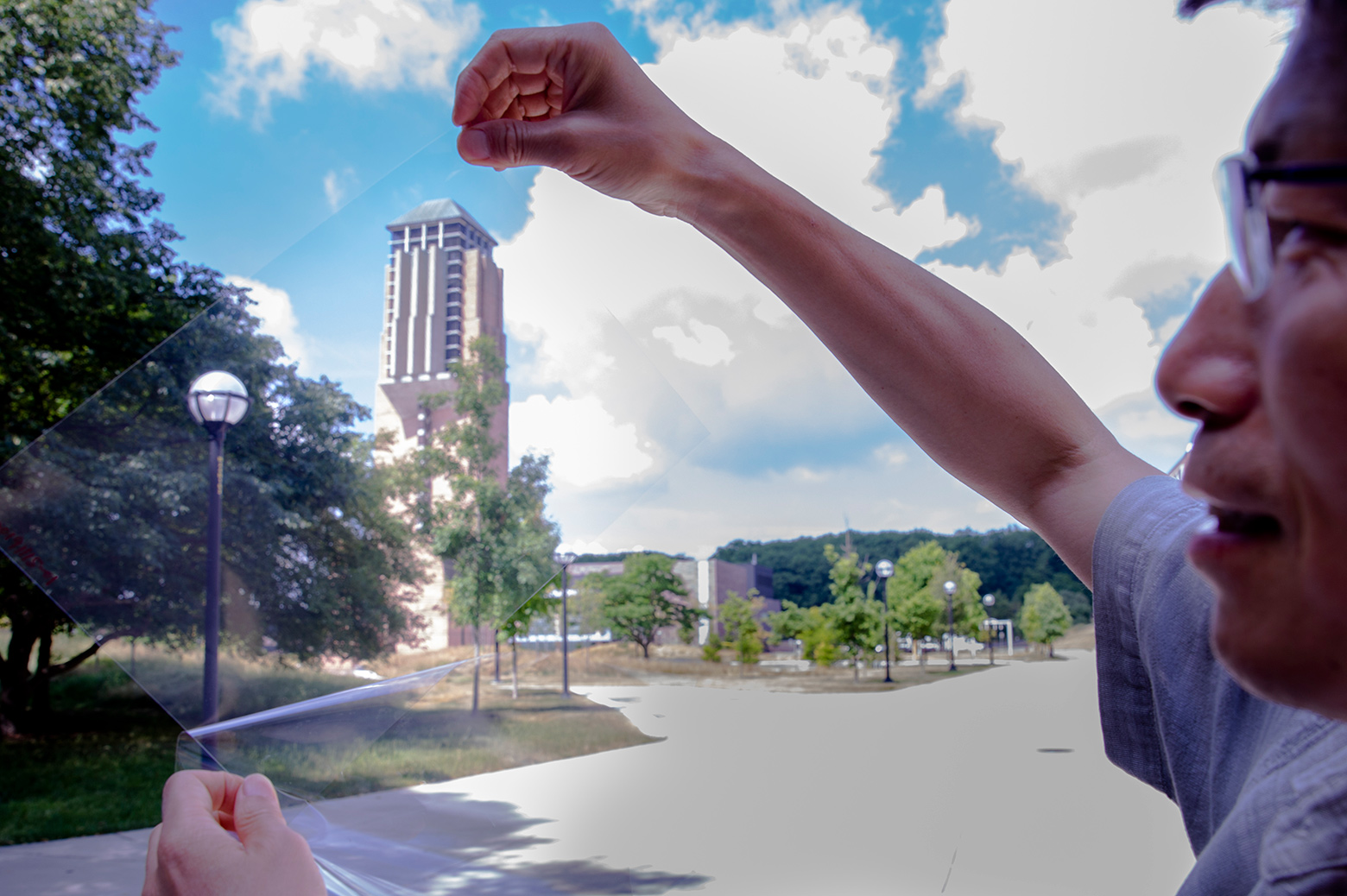 IMAGE:  Jay Guo holds a sheet of flexible transparent conductor on the University of Michigan’s College of Engineering North Campus. The material sandwiches a thin layer of silver between two “dielectric” materials, aluminum oxide and zinc oxide, producing a conductive anti-reflection coating on the sheet of plastic. Photo by Robert Coelius/Michigan Engineering

In an effort to improve large touchscreens, LED light panels and window-mounted infrared solar cells, a team of researchers at the University of Michigan has made plastic conductive while also making it more transparent.

They provide a recipe to help other researchers find the best balance between conductivity and transparency by creating a three-layer anti-reflection surface. The conductive metal layer is sandwiched between two “dielectric” materials that allow light to pass through easily. The dielectrics reduce the reflection from both the plastic and metal layer between them.

“We developed a way to make coatings with high transparency and conductivity, low haze, excellent flexibility, easy fabrication and great compatibility with different surfaces,” said Jay Guo, a professor of electrical engineering and computer science at U-M, who led the work.

Previously, Guo’s team had shown that it was possible to add a layer of metal onto a plastic sheet to make it conductive—a very thin layer of silver that, by itself, reduced the transmission of light by roughly 10%.

Light transmission through plastic is a little lower than through glass, but its transparency can be improved with anti-reflection coatings. Guo and his colleague Dong Liu, a visiting professor to U-M from Nanjing University of Science and Technology, realized that they could make an anti-reflection coating that was also conductive.

“It was taken for granted that the transmittance of the conductor is lower than that of the substrate, but we show that this is not the case,” said Chengang Ji , first author of the paper in Nature Communications, who worked on the project as a PhD student in electrical and computer engineering. Ji received his doctorate from U-M in 2019.

The dielectrics chosen by the team in this case are aluminum oxide and zinc oxide. On the side closest to the light source, the aluminum oxide reflects less light back to the source than the plastic surface would. Then comes the metal layer, composed of silver with a tiny amount of copper in it, just 6.5 nanometers thick, and then zinc oxide helps guide the light into the plastic surface. Some light still gets reflected back where the plastic meets the air on the opposite side, but overall, the light transmission is better than the plastic alone. The transmittance is 88.4% up from 88.1% for the plastic alone. 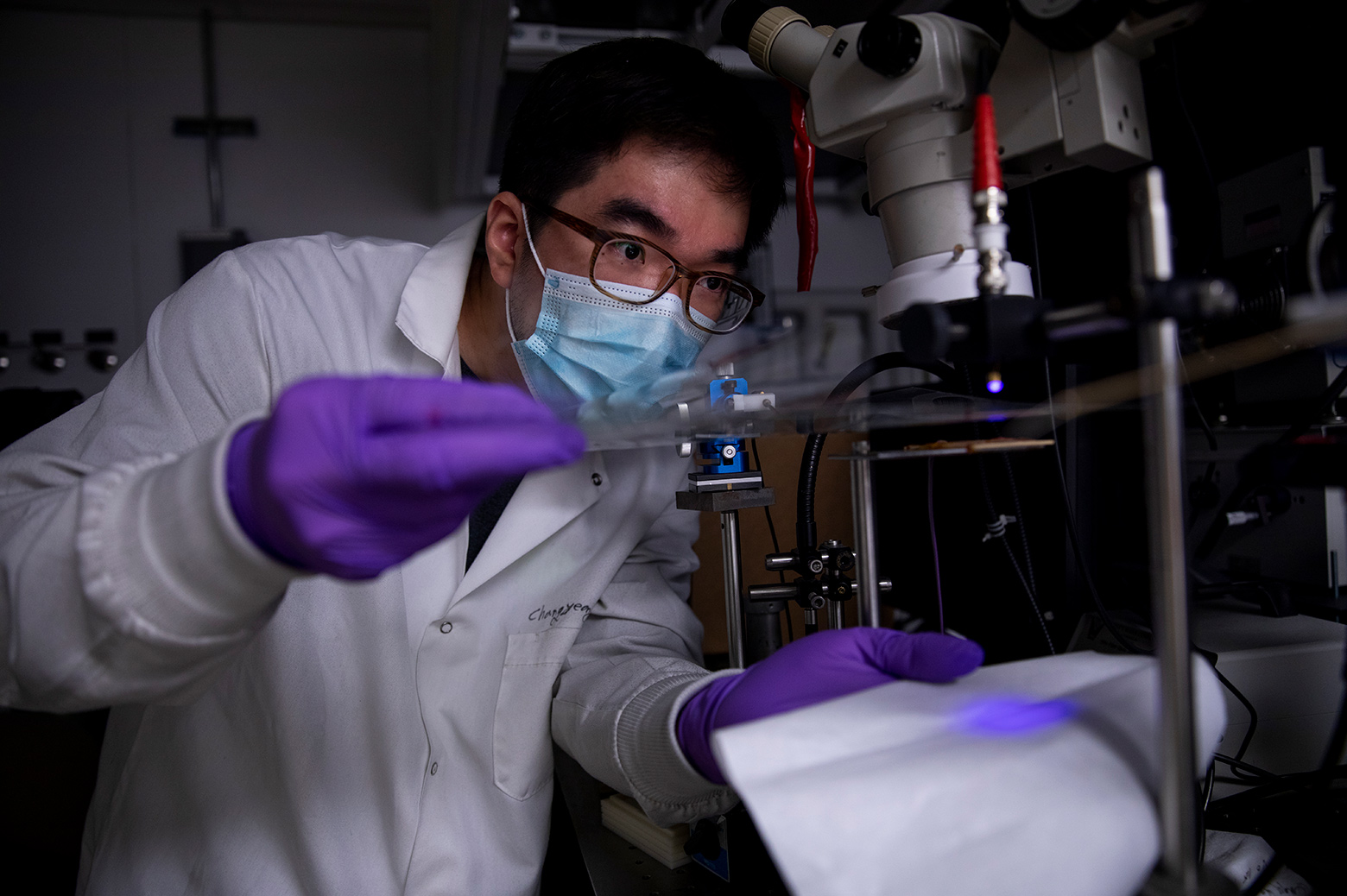 IMAGE:  Changyeong Jeong, a graduate student in electrical engineering and computer science, measures how well light passes through a sheet of flexible transparent conductor. The material sandwiches a thin layer of silver between two “dielectric” materials, aluminum oxide and zinc oxide, producing a conductive anti-reflection coating on the sheet of plastic. Photo by Robert Coelius/University of Michigan Engineering

With the theory results, the team anticipates that other researchers will be able to design similar sandwich-style flexible, highly transparent conductors, which allow even more light through than the plastic alone.

“We tell people how transparent a dielectric-metal-dielectric conductor could be, for a target electrical conductance. We also tell them how to achieve this high transmittance step-by-step,” said Liu.

Guo is continuing to move the technology forward, collaborating on a project that uses transparent conductors in solar cells for mounting on windows. These could absorb infrared light and convert it to electricity while leaving the visible spectrum to brighten the room. He also proposes large panel interactive displays and car windshields that can melt ice the way rear windows can.

The research is funded by the MTRAC Advanced Materials Hub Award. Liu’s visit to U-M was supported by the National Natural Science Foundation of China.

The University of Michigan has licensed the technology to the startup company Zenithnano, co-founded by Guo, to pursue commercialization.

Guo is also a professor of mechanical engineering, macromolecular science and engineering, and applied physics. Ji is now a CTO of another startup based on his PhD work and Zhang, who was a former PhD from Guo lab, is now a professor at Huazhong University of Science and Technology.

These students are recognized by the department for their outstanding scholarship, research, service, leadership, and entrepreneurship.| Long Read
Researchers