by Nicole Casal Moore
Michigan Engineering
December 21, 2017
Powered by a broadband infrared laser, the device can zero in on the ‘spectral fingerprint region’.| Medium Read
Enlarge 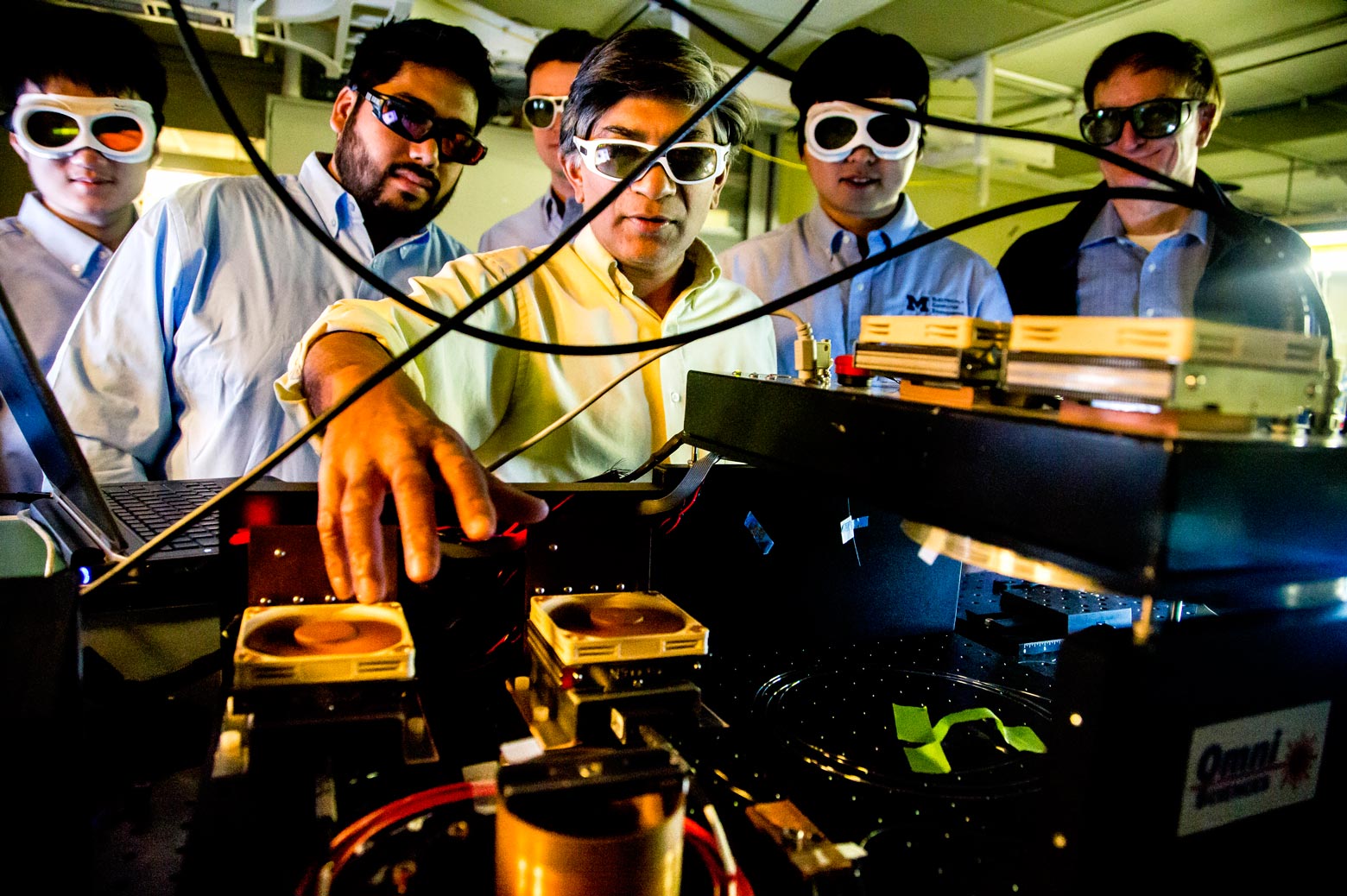 A chemical sensor prototype developed at the University of Michigan will be able to detect “single-fingerprint quantities” of substances from a distance of more than 100 feet away, and its developers are working to shrink it to the size of a shoebox.

It could potentially be used to identify traces of drugs and explosives, as well as speeding the analysis of certain medical samples. A portable infrared chemical sensor could be mounted on a drone or carried by users such as doctors, police, border officials and soldiers.

The sensor is made possible by a new optical-fiber-based laser that combines high power with a beam that covers a broad band of infrared frequencies—from 1.6 to 12 microns, which covers the so-called mid-wave and long-wave infrared.

“Most chemicals have fingerprint signatures between about 2 and 11 microns,” said Mohammed Islam, a professor of electrical and computer engineering at U-M who developed the laser. “Hence, this wavelength range is called the ‘spectral fingerprint region.’ So our device enables identification of solid, liquid and gas targets based on their chemical signature.”

The project is a collaboration among the global technology company Leidos, fiber makers IRflex and CorActive, the University of Michigan and the U-M startup Omni Sciences, which was founded by Islam. The project is funded by the U.S. Intelligence Advanced Research Projects Activity (IARPA). 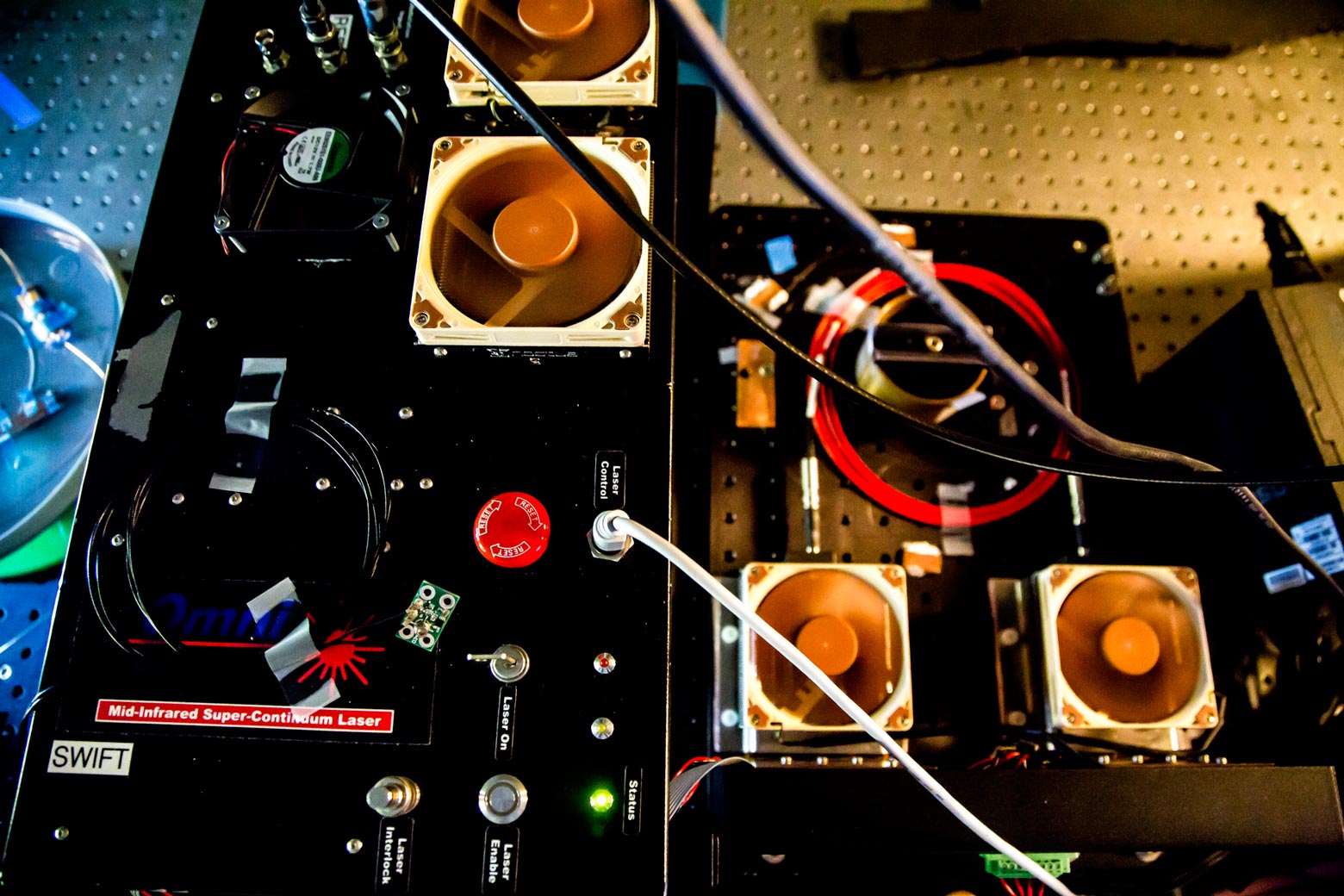 IMAGE:  The sensor is able to detect a variety of qualities from a distance of more than 100 feet away and could be used to identify traces of drugs and explosives, as well as speeding the analysis of certain medical samples. Previously such a sensor was only able to be used in closed proximity. Photo: Joseph Xu

Islam and his team built their device with off-the-shelf fiber optics and telecommunications components, save one custom-made optical fiber. This approach ensures that the laser will be reliable and practical to manufacture at a reasonable cost. “We’ve shown we can make a $10,000 laser that can do everything a $60,000 laser can do,” Islam said.

Broadband infrared lasers are typically built up from a laser that produces very short pulses of light, and then a series of amplifiers ramps up the power, but this approach is limited to laboratories. In addition to their high costs, these components can’t yet shrink small enough to fit into a handheld device. Plus, the use of lenses and mirrors would make the device sensitive to jostling and changes in temperature.

To craft their new laser, the team started with a standard laser diode, similar to those in laser pointers and barcode scanners. This pulse was then boosted in power with telecom amplifiers—similar to those used in the field to periodically ramp voice signals back up as they diminish over long travels through the fiber-optic lines. Then they ran this powerful, broadband signal through a 2-meter coil of optical fiber.

ft, distance from which the device works

“This where the magic comes in,” said Islam. “We put in these roughly one-nanosecond pulses, at this high power, and they break up into very narrow series of small short pulses, typically less than a picosecond in width. So basically for the price of 20 cents of fiber, we obtain the same kind of output as very expensive mode-locked lasers.” 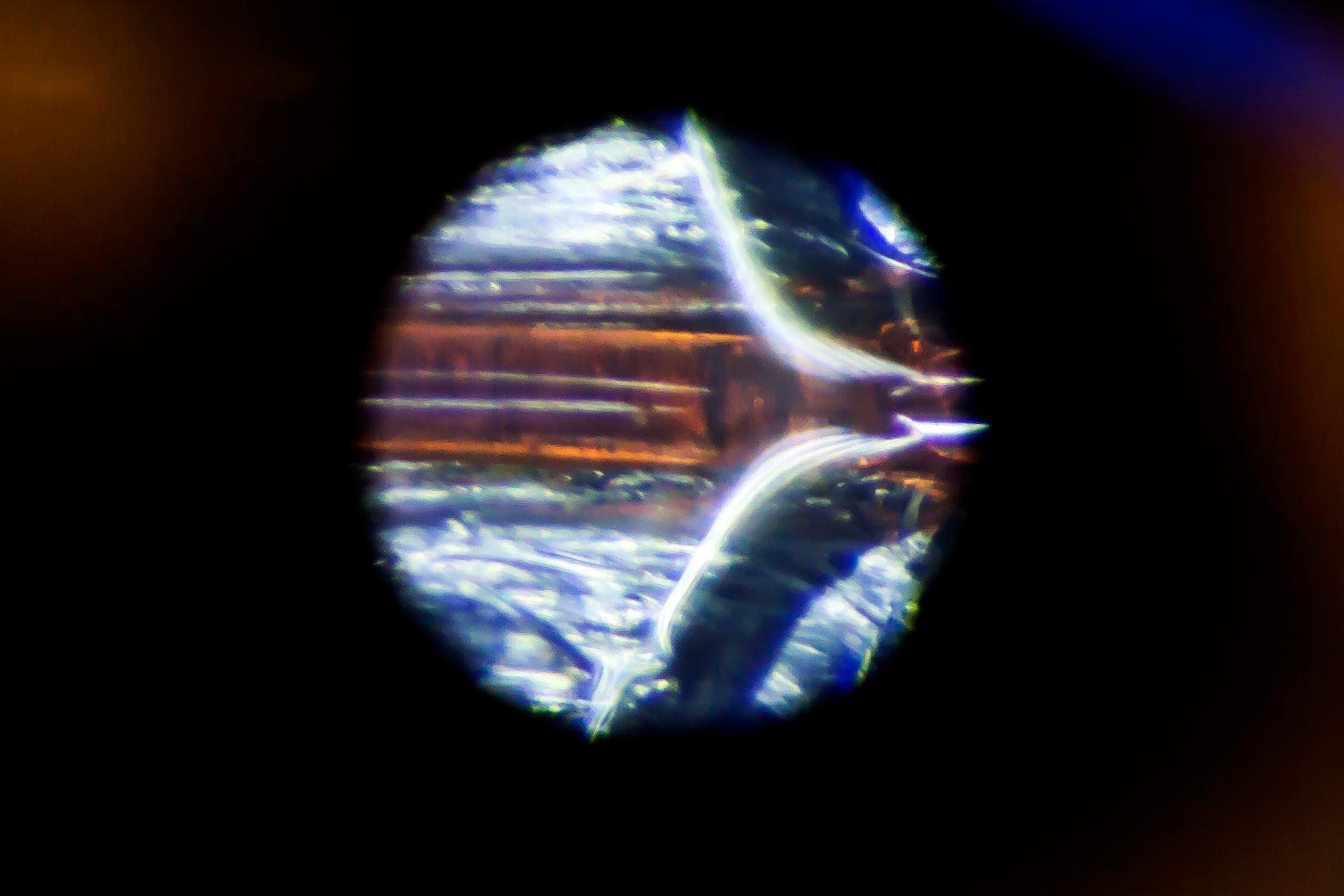 IMAGE:  Fibers that are constructed together in order for a light to be shot through by a chemical sensor prototype developed by EECS Professor Mohammed Islam's research group. Photo: Joseph Xu

To use the device, the researchers shine the laser on an object and analyze the reflected light to identify what wavelengths did not bounce back. They can identify chemicals by the unique pattern of infrared wavelengths that they absorb.

The team successfully demonstrated the laser for IARPA in August 2017, analyzing 70 mystery samples over two days of testing. Phase 2 of the project will entail shrinking the system toward the size of a shoebox, a process that will be led by Leidos and Omni Sciences.

In addition to the applications in policing and defense, Islam sees a future for the technology in medicine. For instance, tissue samples are chemically analyzed in a laboratory—a process that takes time and materials. Islam thinks the laser could provide an assessment of the chemical content on the spot. It may even be possible to run the beam through a scope and analyze tissue right in the body.

The laser is described in the journal Optics Letters, in an article titled, “Mid-infrared supercontinuum generation from 1.6 to >11 micrometers using concatenated step-index fluoride and chalcogenide fibers.” Islam is also a professor of biomedical engineering.