by Randy Milgrom
Michigan Engineering
November 12, 2017
Many faculty were pioneers in the field, helping to lay the groundwork for areas such as control theory, wireless communication and traffic management.| Medium Read

Aerospace engineering may not appear to have much to do with the cruise control on a car, the temperature regulation in a refrigerator or home, or data handling in wireless internet routers and modems. But these technologies, based on systems that take measurements and adjust whatever they govern to accomplish a goal, all evolved from a discipline that Michigan Aerospace research helped to develop: control engineering.

The department began incorporating control theory and technology into its research and curriculum in the mid-1940s. Later, when digital computing finally gained enough speed to offer a platform for more complex control systems, Michigan Engineering took an unusual approach. With leadership from aerospace and electrical engineering, research and teaching related to computing and control engineering was consolidated into a single graduate degree program.

Few records remain of this period that cemented U-M’s strength in control engineering – not just in aerospace and electrical engineering but also in mechanical and industrial engineering. Still, the program and its participants left a legacy that persists to this day.

Though few records remain from this period, the program and its participants left a lasting legacy.

Many faculty were pioneers in the field, helping to lay the groundwork for areas such as control theory, wireless communication and traffic management. Alumni of the program would lead in academia and industry. And all of the departments involved benefited from an interdisciplinary viewpoint that continues today.

Building expertise Control work in Michigan’s Aeronautical Engineering department, which eventually became Aerospace Engineering, started in earnest shortly after World War II. As the Air Force separated from the Army, it wanted to build its knowledge in guided missiles by sending officers on two-year graduate programs. Michigan already had experts in the propulsion and aerodynamic sides of missiles, but guidance and control were relatively new territories.

“Traditionally in aeronautical engineering, control had not been a particularly important subject,” said Robert Howe, professor emeritus of Aerospace Engineering. “There were autopilots for airplanes, but they were not very sophisticated control systems.”

Around this time, in 1946, the department hired Myron Nichols, who specialized in using radio waves to send and receive information. Nichols developed the first courses related to control engineering as well as two research programs – one in analog computing and another devoted to upper atmosphere research. For several years, he also directed the guided missiles program.

With help from funding provided by the Air Force, which kept 50 or so officers in this program at any given time, the department brought Lawrence Rauch and Howe onto the faculty in 1949 and 1950, respectively. Together with Nichols, they brought expertise in physics, electrical engineering and applied mathematics to bear on the nascent field of control systems in aerospace.

Elmer Gilbert and his twin brother Edward were among the early civilian graduates of the doctoral program in instrumentation engineering. Elmer fondly remembers Nichols, Rauch and the culture that they fostered.

“They were such good mentors,” he said. “The whole environment was one of excitement.”

Even before coming to Michigan, Nichols and Rauch worked together on using radio waves to beam data taken by research rockets back to the ground, publishing a well-known book on the subject. This technology was a predecessor of today’s wireless communications.

In 1954, Nichols took leave of the University to join the Ramo Wooldridge Corporation. “Within three weeks he was in charge of the entire Atlas program, our first intercontinental ballistic missile,” Howe said.

The combination of aerospace and control backgrounds made U-M guided missiles graduates excellent candidates to become U.S. astronauts. Three of them served in space. James McDivitt commanded the 1965 Gemini 4 mission, in which fellow Michigan Aerospace alum Edward White performed the first spacewalk by a U.S. astronaut. Later, in 1969, McDivitt orbited the moon.

The Apollo 15 mission of 1971 featured two guided missiles alums. James Irwin drove a buggy over the moon’s surface to collect specimens and explore the terrain, while Alfred Worden handled the lunar command module, which stayed in orbit.

The control contingent continued to expand in the late 1950s with the addition of more non-traditional aeronautical engineers. A few of them, Fred Beutler, Don Greenwood and Elmer Gilbert, are emeritus professors today.

The Gilbert brothers and Howe, all professors at the time, founded the company Applied Dynamics in 1957. Their devices harnessed the power of analog computing for real-time simulation of aircraft and guided missiles, at a time when digital computers were too slow. The company continues today as Applied Dynamics International, offering computers that can run real-time simulations integrated with control system hardware, creating hybrid real-and-virtual environments for testing individual components of aircraft, spacecraft and other systems.

“The CICE program prospered because … we had some of the best students in the College.”

In the early 1960s Edward Gilbert left the University to work full time at Applied Dynamics, while, Elmer Gilbert gained renown in the field for the “Gilbert Realization.” This was a mathematical tool for discovering the smallest number of variables that could give a complete description of a system that can be controlled and observed.
Later that decade, Elmer Gilbert solved a long-standing theoretical problem in feedback control, simplifying the problem by limiting interactions between systems. These accomplishments helped him to earn a place in the National Academy of Engineers.

The department gained another leader in the field when William Root, former head of an analysis group at the MIT’s Lincoln Labs, joined the aero department and the control program, by now called Information and Control Engineering, in 1962. “He was a well-known pioneer in statistical communication and information theory,” said Gilbert.

Computer, Information and Control Engineering Faculty members like Gilbert and Root drew more students and faculty to the Aerospace Engineering Department, which was given its present name in 1965. Harris McClamroch and William Powers were among those who joined around 1968, when aerospace and electrical engineering, along with mechanical and industrial engineering, revamped the control program to incorporate computers.

The resulting Computer, Information and Control Engineering (CICE) program established the foundations for teaching and research on “smart” machines and vehicles that remain important to Aerospace Engineering and to the college.

“The CICE program prospered hugely because students knew what was going on,” said Gilbert. “We had some of the best students in the College at the graduate level.”
Dennis Bernstein, now a professor of aerospace engineering at U-M, was one of those students who saw the future importance of the field. “In those days, people realized that as computers were getting better and better, there would be more applications for this kind of technology,” he said. “I came to Michigan for graduate school since it had had one of those very rare programs that focused on systems and control.” 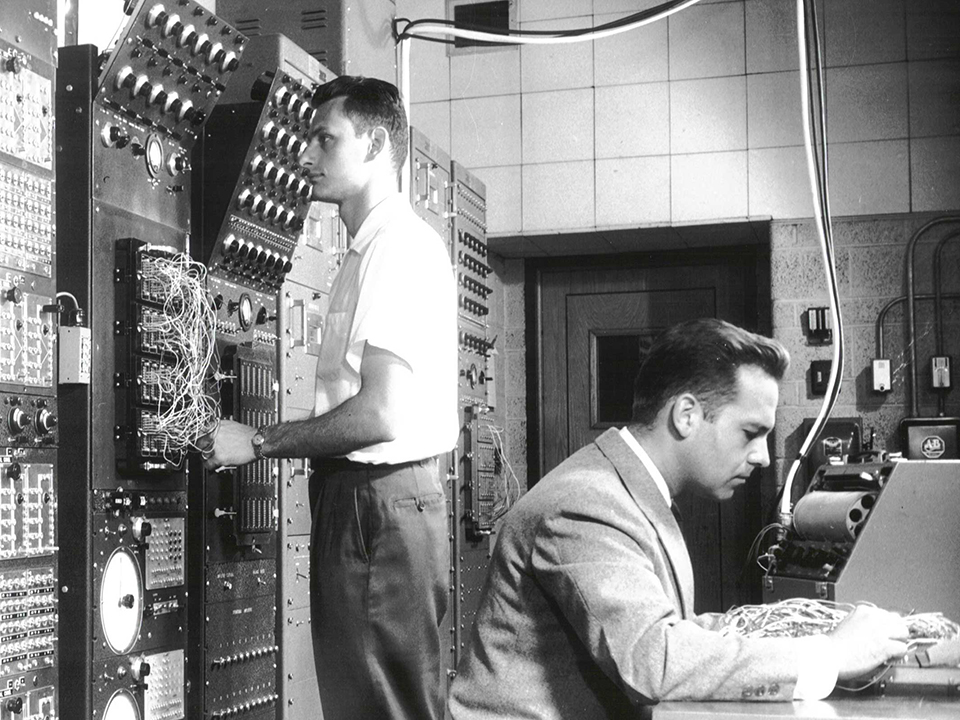 That outlook, Bernstein explained, is crucial for building the feedback loops that allow the computer to control a vehicle by anticipating and responding to commands and disturbances.

Bernstein worked under Elmer Gilbert along with Daniel Lyons, now at NASA’s Jet Propulsion Laboratory. They developed techniques that would allow an airplane to stay aloft longer, aiming for a full day. While it was a fairly academic problem at the time, that is no longer the case. “Facebook wants to provide Internet service over Africa. So they design these large, flexible aircraft, and they want them to fly on solar power and stay up there maybe for months at a time,” said Bernstein.

A popular CICE course featured an electric train set that students fitted with microprocessors and other electronics. By controlling the trains and tracks, they addressed problems such as speed control, scheduling, routing and collision avoidance. McClamroch points out that these early studies explored the principles of networked control systems that now guide much current research on air traffic control and similar vehicle network problems.

For students with ambition to engage in space exploration and satellite communications, Greenwood taught vehicle control and orbital mechanics. He and Howe worked with fellow aerospace professor Laurence Fogarty to develop a model of helicopter blades that later went into the first real-time flight simulator for helicopters.

The program’s alumni became professors or had key positions in industry, in aerospace, in the Air Force, in research institutions.

The demand for faculty expertise meant that Nichols wasn’t the only professor to leave for a top position in research or industry. In 1977, Rauch moved to NASA’s Jet Propulsion Laboratory, where he became Chief Technologist. Then, around 1980, Ford Motor Company hired Powers to head an effort to incorporate computer technology, which was rapidly shrinking, into vehicle engines. By the time he retired, he was vice president of research at Ford.

Likewise, many of the program’s alumni would make an impact in their fields.

“There were many students who got PhDs in CICE, and they are either professors or they have key positions in industry, around the world,” said Bernstein. Those with an aerospace focus often went on to head projects in the Air Force, in aerospace companies and in research institutions.

The CICE program ended in 1984, when computing work in engineering was consolidated in the Electrical Engineering and Computer Sciences Department. Still, the program’s legacy lives on in the college through an interdisciplinary control group that collaborates on research projects and meets for weekly seminars during the academic year. The continued sharing of control expertise and teaching responsibilities allow Michigan Engineering to offer a broader range of courses to all students at Michigan Engineering.

Aero Throwback: Better ways to get to a football game

The early days of Michigan's flying clubs are full of adventure, mishaps and tenacity.| Medium Read