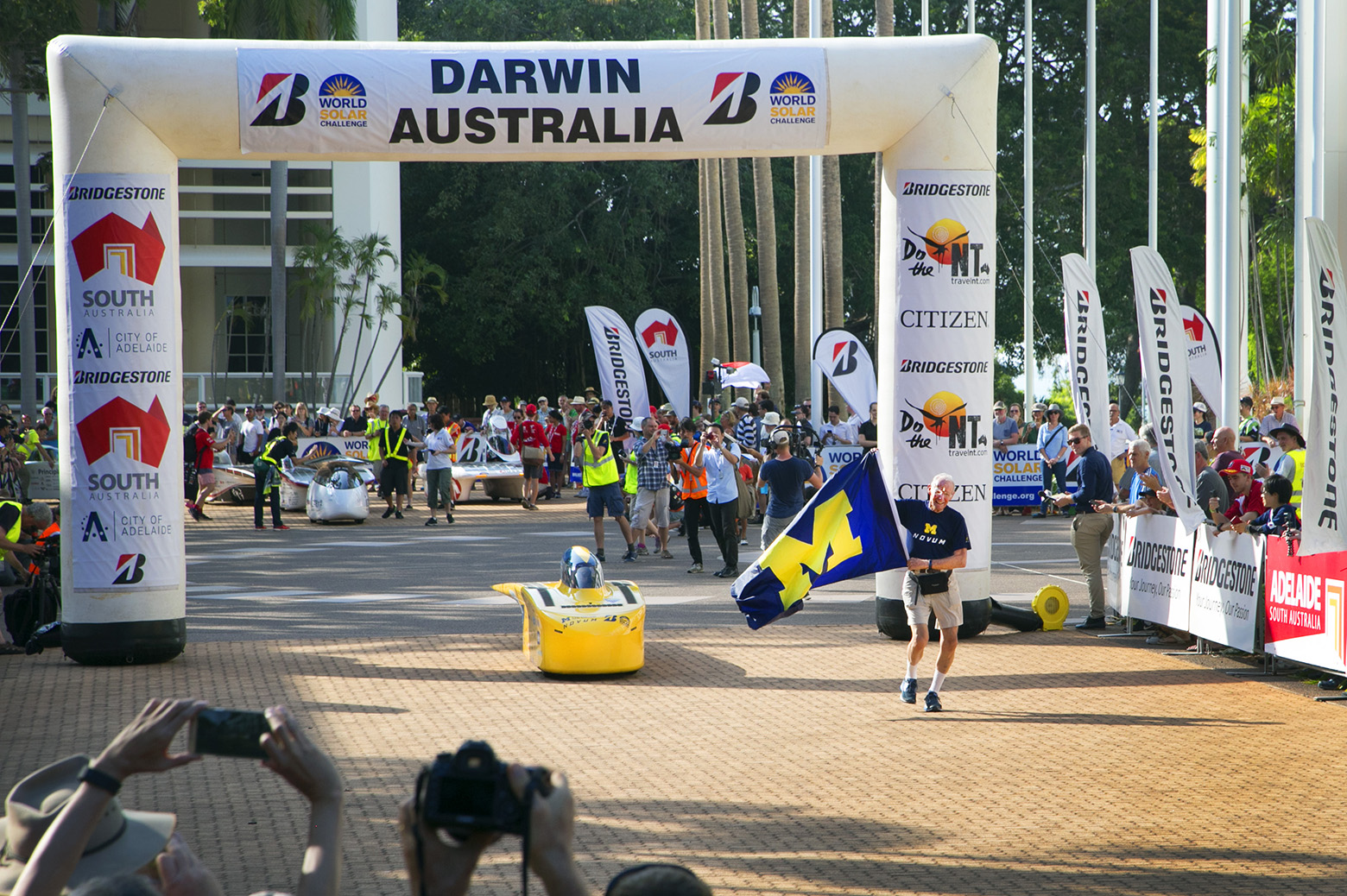 “The best teams have confidence in themselves,” proclaims project manager Jon Cha in the morning huddle. “They’re not focused on winning, they’re focused on what they’re doing – but they’re also very, very relaxed. I need all of you to stay relaxed and calm.

“The hardest part is over. Now we’re just going through the steps. If we do our best, we have a good shot at winning. We will start at that line as a team. We will end in Adelaide as a team – no matter what happens on that 3000 kilometers in between. The important thing is that we trust each other and support each other, the entire way through.” 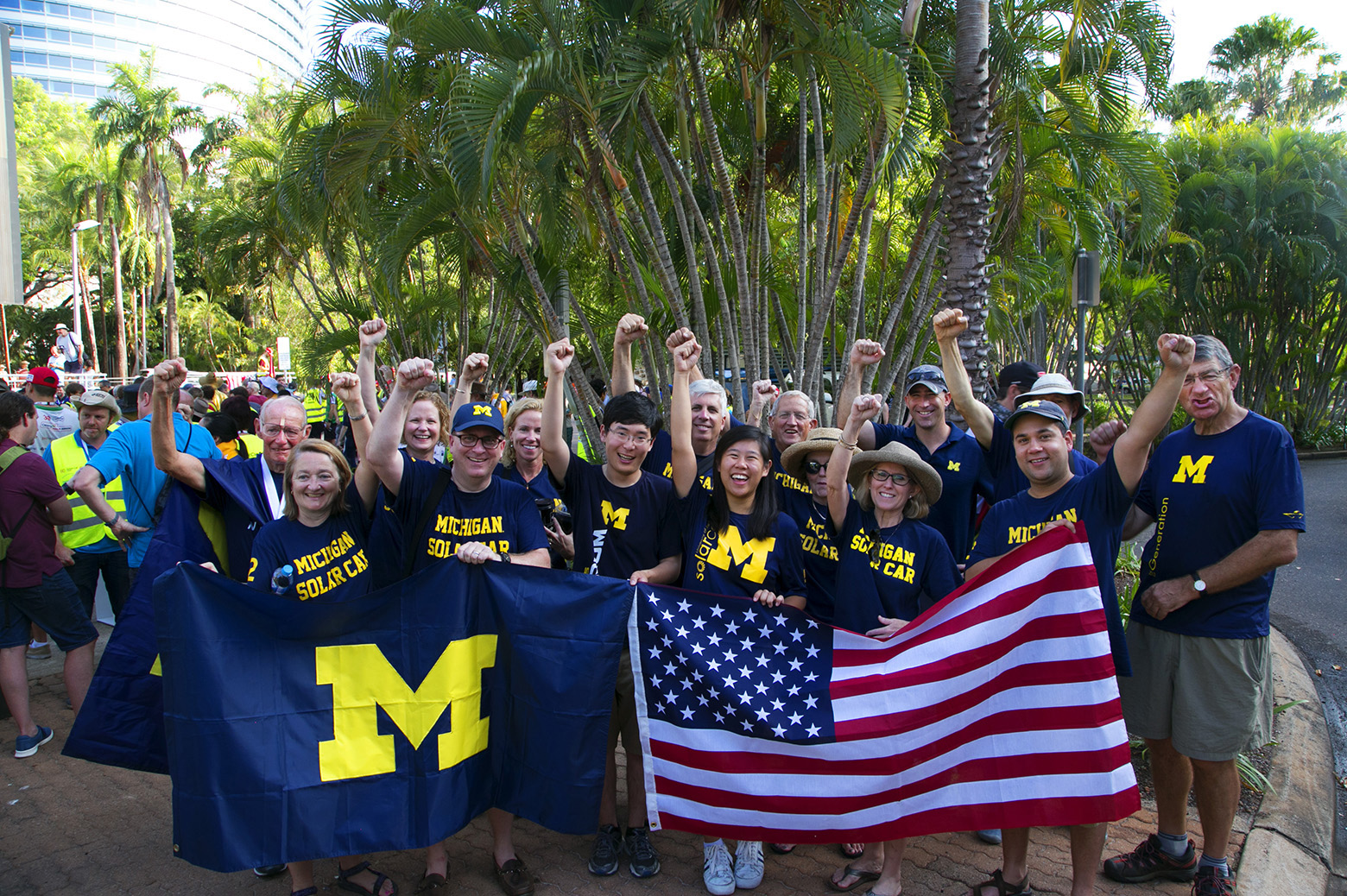 Novum crossed the starting line as so many Michigan solar cars have before – with alumnus and mentor Chuck Hutchins running alongside, waving a Block M flag.

As the Michigan caravan drove south out of Darwin, the stoplights grew fewer and the termite mounds higher. Clusters of fans and curious onlookers waved and held up their cell phones as the sleek solar vehicles streamed past.

Early on, Michigan’s caravan outpaced a handful of teams that earned an earlier starting position. Each pass requires respectful radio communication with competitor’s support vehicles. The voices on the other end came back in a spectrum of accents – emphasizing the global nature of this 3000-kilometer contest.

Both figuratively and literally, the heat was on at the first mandatory control stop, outside the small town of Katharine. The sun beat down an oppressive ninety-three degrees as Novum came to a stop. After starting in the tenth position, U-M was the fifth car to make it to the checkpoint – within fourteen minutes of the lead vehicle, Japan’s Tokai. 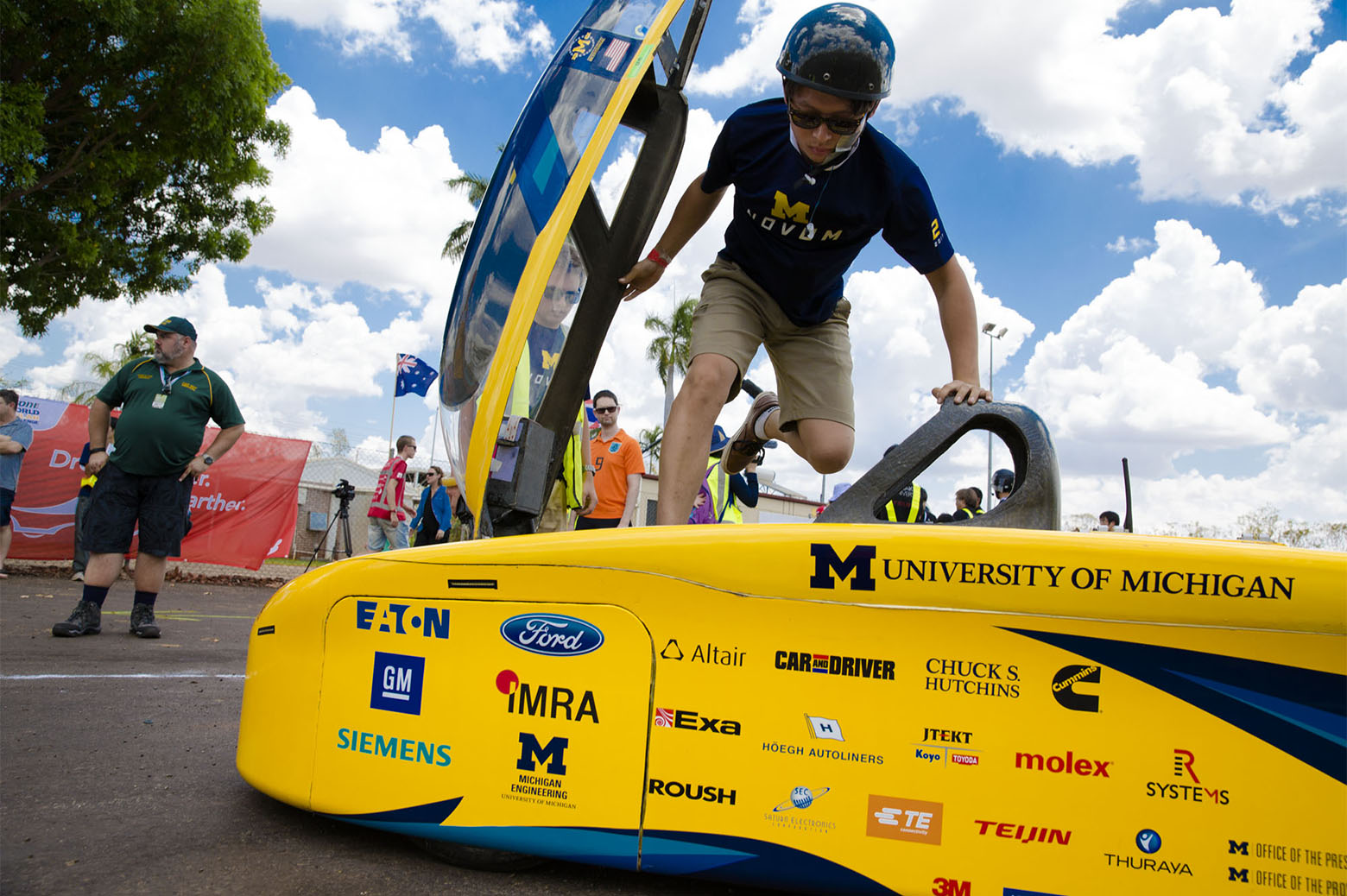 Despite the blazing heat, the sky overhead was spotted with passing clouds. “I think this race is going to be more strategy intensive than 2015,” says Clayton Dailey, the team’s engineering director. “In 2015, it was all sun until the last day. This year there’s looking to be a lot of clouds and possible thunderstorms.”

Riding along to help inform the team strategists is U-M Solar Car alumnus Jeff Cwagenberg, who studied climate and space sciences and engineering as an undergrad. This will be his second tour as an embedded alumni mentor. He interprets the team’s weather models and reports to the strategists who then adjust Novum’s ideal output.

The clouds were still overhead as Michigan pulled into the chaotic second control stop. Again, the top five teams had arrived in a tight cluster. Driver Chae Woo Lim pulled in fast and executed a time saving maneuver by stopping forward, jumping out and lifting Novum’s nose to swing the vehicle into the optimal charging position.

The timing of the stop was such that the checkpoint became the team’s camping location. As the crew did routine checks, strategist Andrew Dickinson peered down into the thin opening of his cracked laptop. As he analyzed the day’s guarded data, the rest of the crew went into autopilot, calmly and confidently going straight into their routine tasks.