Michigan Engineering
September 8, 2017
Hungry for din, and even more for the win | Short Read

The pans are char-stained. The sinks are small. The knives could slice better, but somehow we make it work.

The kitchen can get pretty crowded at the hostel. Echoing with discourse and laughter from languages both familiar and foreign – but all friendly: french, german, japanese, italian and all the variations of accents in english. We’re often sidestepping, weaving through others and apologizing “for the reach”.

It’s an international hub where you can find people from all walks of life cooking and sharing the scents and flavors of their culture: stir-fry, stews, ramen, steaks. Seeing these travelers forego fast food and cook their own meals is inspiring. It’s like a way of holding onto a piece of home while they’re far from it.

“I don’t get to make the food that I would necessarily eat,” says Peter Rohrer, the team’s operation director. “Each night, we have roughly an hour to cook for everyone. So when you start with raw meats and uncooked pastas, you’re always doing multiple things at once. There’s no oven, so we can’t make things like lasagna. But we have a litany of pots and pans, some burners and a microwave.” 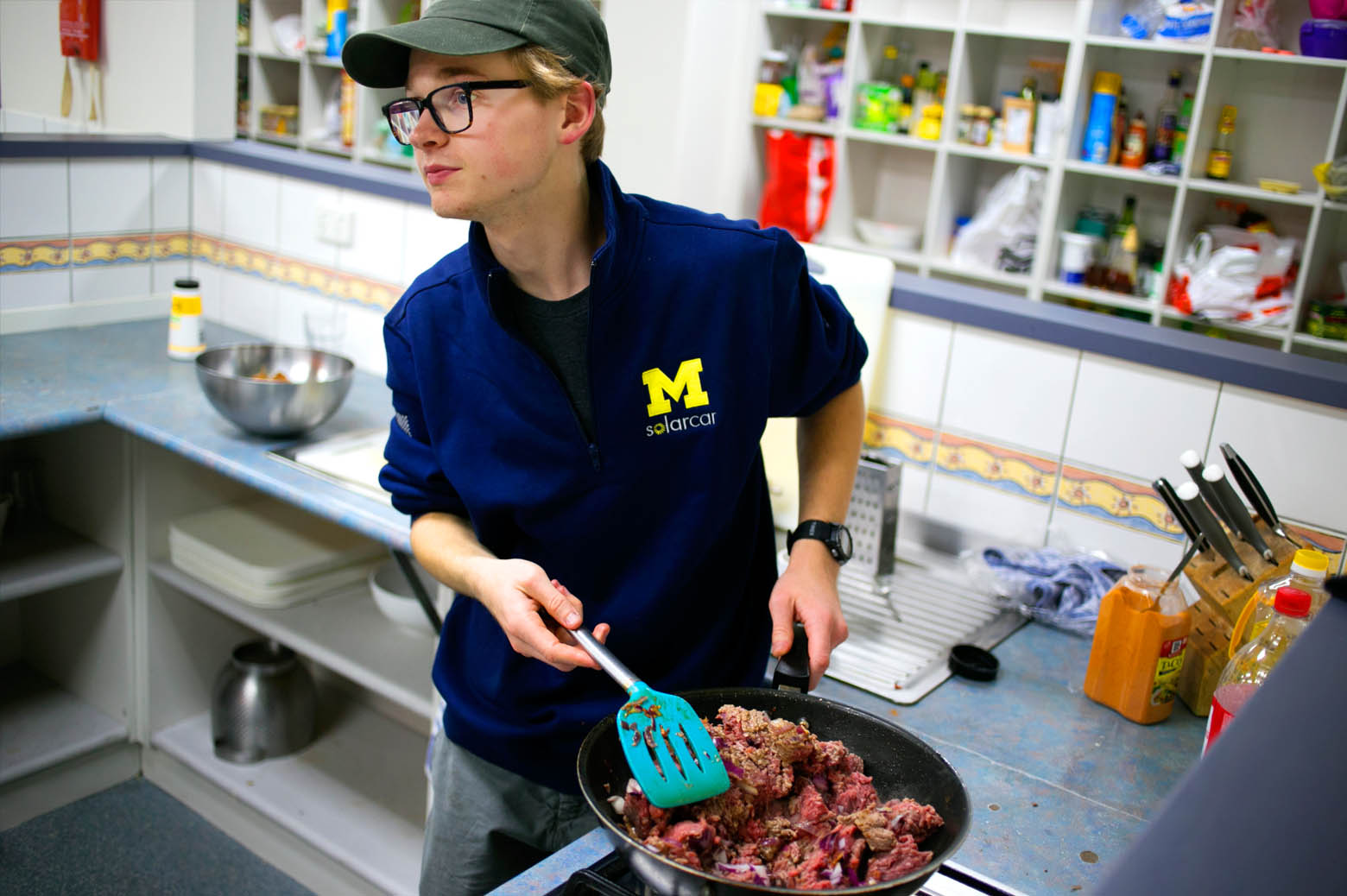 IMAGE:  Peter Rohrer leaves Hangar 107 each day to drive back to the hostel and cooks for the crew. Photo: Akhil Kantipuly, UM Solar Car.

So far we’ve had pasta, stir-fry, fried rice, and some pita wraps. Compared to previous teams, this is a really easy group to cook for. We only have two food restrictions. Back in 2013, they had every food allergy imaginable, so it was sort of a nightmare planning meals.

“So it’s pretty easy for us, and people aren’t picky,” says Rohrer.

“I think the cooking is great, but kind of repetitive,” says Chae Woo Lim, mechanical engineer. “It’s different parts of chicken, but always cooked the same. It can be a little charred, which is good, but yesterday’s chicken was a little charred and undercooked at the same time – the best of both worlds I guess, haha. Nate and I decided to change it up and got fish and chips at the cafe. That was nice change, so we’re ready for more PB&J now.” 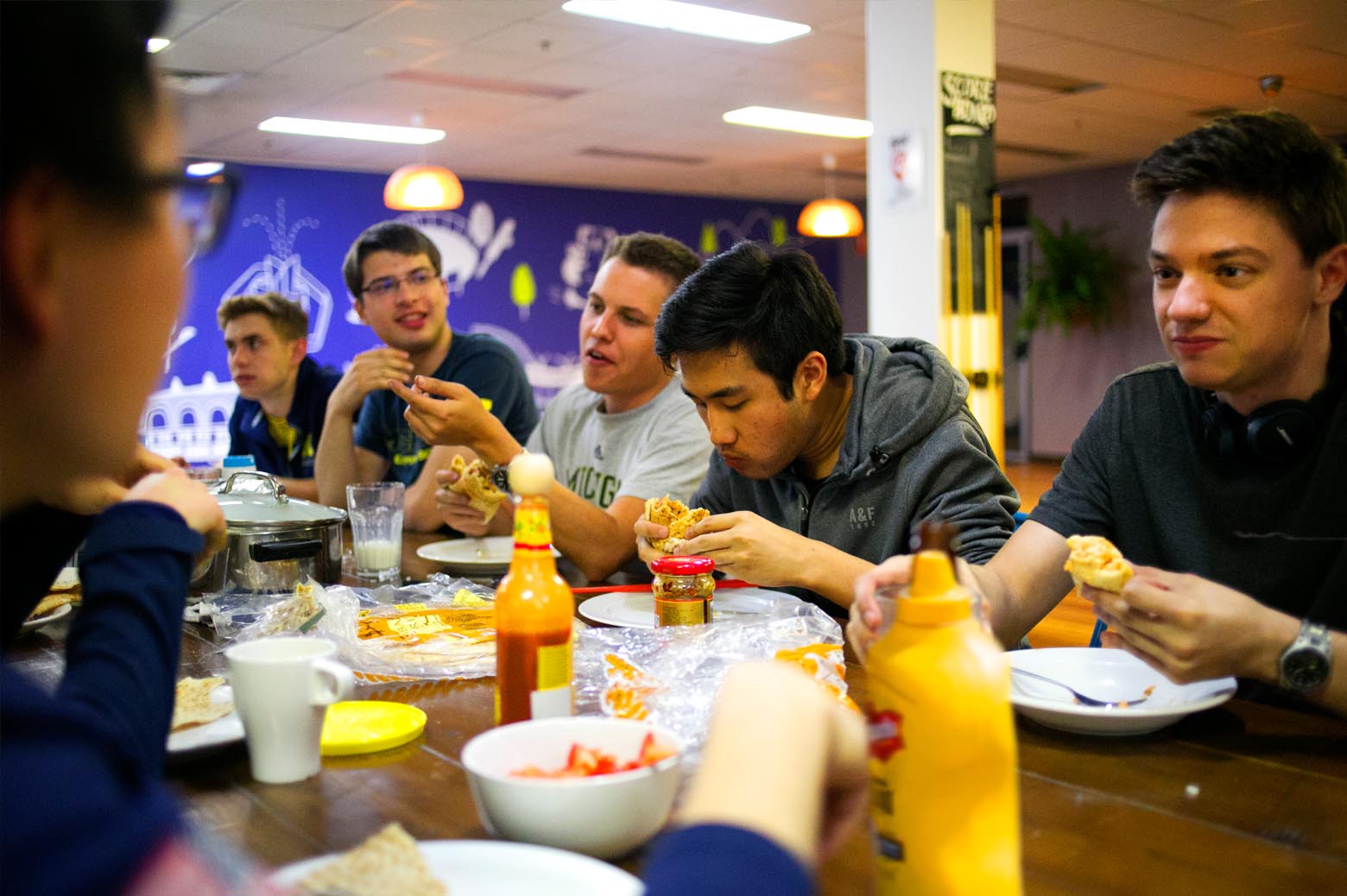 (Hossein) Hmm, I think people ate a lot, didn’t they?

(Andrew) We eat it because it’s food. Just because we eat it doesn’t mean it’s good.

(Hossein) Haha…But yeah, I think the food is fine. It’s a little hard to make chicken wings though. We have to make sure they’re cooked properly or people will get sick.

The focus when planning food is providing twenty people with enough energy and nutrients to keep them going through long days and nights. That gets taken to another extreme on the mock race. It’s a departure from the relative luxury of cooked meals and dinner tables at the hostel. Meals become even more minimalistic – exactly what’s needed to keep going: simple carbs and protein. Everything is cooked over a camping stove and eaten in the great outdoors, or in a vehicle as you race down the Stuart Highway.

Our mock race is September 9-15, in the Outback between Glendambo and the Northern Territory border.