by Kate McAlpine
EECS: Electrical and Computer Engineering
July 5, 2016
For now, Grizzle and his graduate students are only attempting the easiest routes, between the grassy two- to three-foot moguls, over smaller undulations that he calls “merely very difficult.”| Short Read
Enlarge 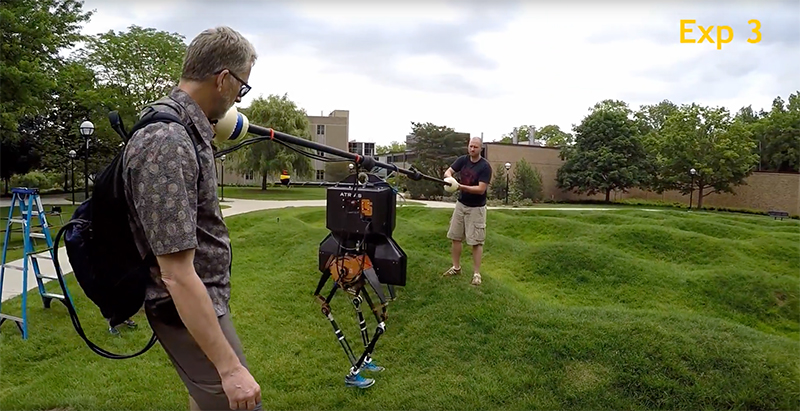 Since he received a robot capable of walking outside, Jessy Grizzle has heard the siren call of the Wave Field, the undulating earthen art installation outside the François-Xavier Bagnoud building.

For now, he and his graduate students are only attempting the easiest routes, between the grassy two- to three-foot moguls, over smaller undulations that Grizzle calls “merely very difficult.”

Grizzle’s team first prepared their robot, MARLO, with laboratory obstacle courses designed to emulate the steep mounds of the Wave Field. One unexpected sticking point, discovered on an attempt earlier this spring, was the gantry crane that prevents catastrophic falls when MARLO loses its balance. (Endless robot repair work doesn’t make for an efficient research process.) The wheeled crane was impossible to push over the grassy waves.

So, the team upgraded MARLO’s battery package and built a “human gantry” – a bar that could be carried between two people, the robot tethered between them. Two weeks ago, they were finally able to get MARLO into the field.

At present, the wave field is getting the best of Grizzle’s team. It has broken worn-out parts in the robot’s old legs. It has blown the too-sensitive mechanical fuses that came with MARLO’s new legs. But the main problem is that MARLO doesn’t know how to recover its balance in the narrow valleys between the moguls. When the robot throws a foot out to the side to keep from toppling over, that foot often strikes the rising ground, causing a fall.

Over the summer, Da will work with fellow PhD students, Ross Hartley in robotics and Omar Harib in electrical and computer engineering, to refine the algorithms that control how MARLO keeps its balance. They will upgrade the algorithm that chooses MARLO’s gaits to consider simultaneous terrain height changes ahead and to the sides, using an idea from the lab of Aaron Ames, a roboticist at Georgia Tech. Then, MARLO will take its next shot at walking the wave field.

“Maybe MARLO will never be able to do it, and only the next robot will be able to,” said Grizzle. “Or maybe you have to have computer vision in order to do this. We don’t know. And if you don’t try these crazy experiments, you’ll never know.”

This work was funded by the National Science Foundation. Grizzle is also a professor of electrical engineering and computer science.