Star Wars tech: How far are we? Chewie gets answers 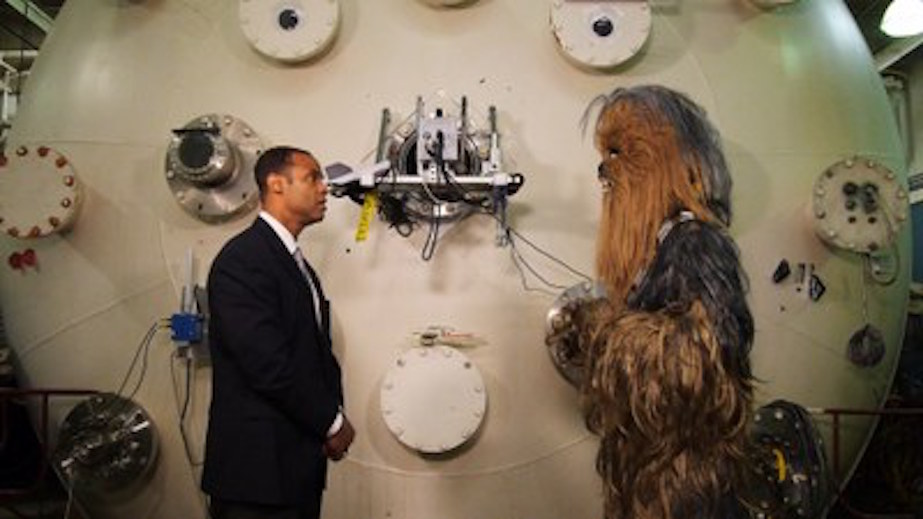 How far are we from Star Wars-style space travel? University of Michigan Aerospace Engineering Professor Alec Gallimore estimates we’re two to three decades from using advanced propulsion systems to send people to Mars. In his lab, he’s building electric, or, ion propulsion systems for extremely long space missions. The X3 plasma thruster his team developed with NASA and the U.S. Air Force is part of a prototype system NASA is considering for a future astronaut mission to the Red Planet. One of the biggest differences between Star Wars tech and the current state-of-the-art, Gallimore says, is in acceleration.

“Current ion propulsion systems have accelerations of a fraction of a G, or 0 to 60 (mph) in hours. In Star Wars, you see these fighters able to accelerate with multiple Gs, so 0 to 60 in less than a second. The big difference there is power density,” Gallimore says. “If you look at the power density we have now vs. what would be needed for a TIE Fighter, the difference is about a factor of about a million.” 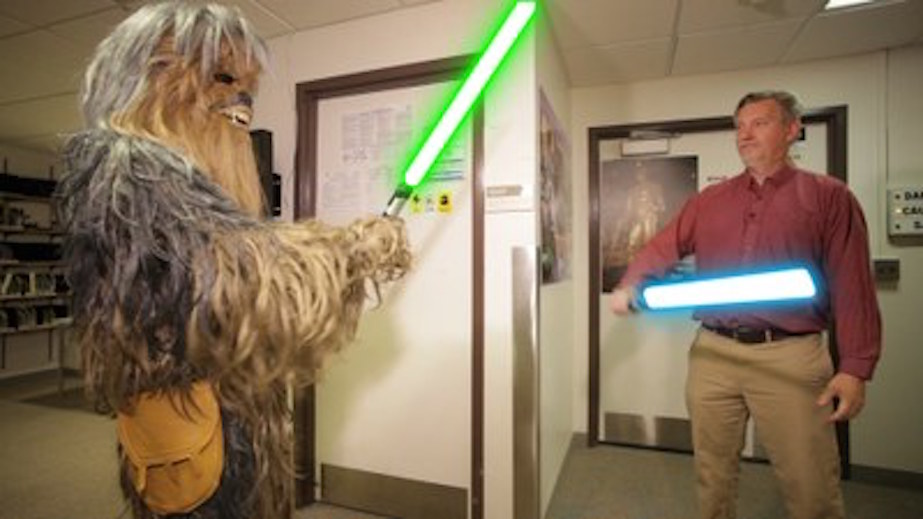 What is a light saber and how does it work? These weapons look a lot like lasers to the untrained eye, but Karl Krushelnick, the U-M professor of nuclear engineering and radiological sciences who developed the most intense laser in the universe, says they must be something else. Lasers—powerful beams of light—would fly indefinitely out of the the sabers’ hilts, rather than end at a point several feet from it. And in fights, the beams would just go through each other.

“A light saber must be more like a discharge, like a lightning bolt, which comes from a power supply in the handle,” Krushelnick reasons. “To make these very energetic discharges, one would need a high energy power source that you could put into the handle. Right now one doesn’t exist. To compress it and put it into the handle is a significant technical challenge.” 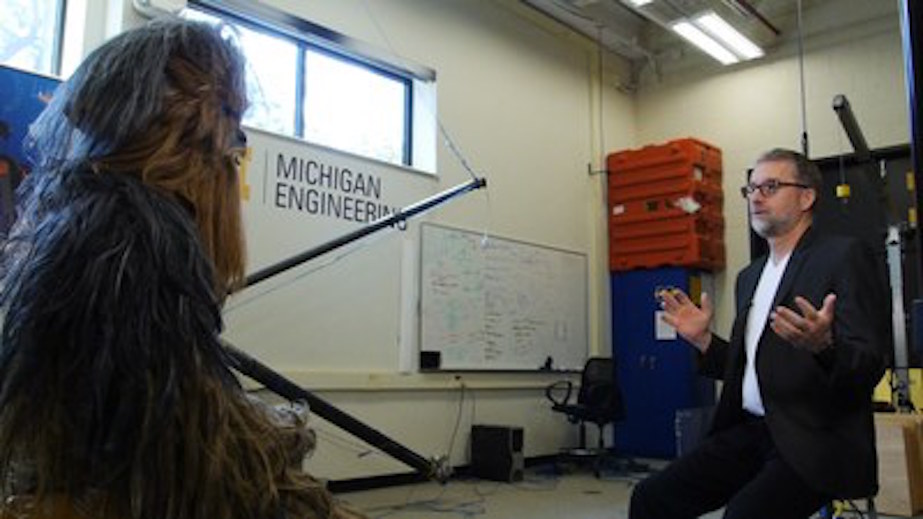 What will it take to make butler/ambassador ‘bots like C3PO? When we think about droids, the aspects that come to mind first tend to be the mechanics, the electronics, maybe the artificial intelligence, but for robots that are going to work alongside humans, having a human form is important. Two-legged locomotion is a significant hurdle for engineers, says Jessy Grizzle, a U-M professor of electrical engineering and computer science and mechanical engineering who programmed the world’s fastest two-legged robot with knees.

The mathematics behind bipedal walking are really important, Grizzle says. “How you formulate these equations and what you’re trying to accomplish in terms of locomotion, robustness to disturbances, energy efficiency, those are the things going on in my lab today with students. We’re working on getting close.” 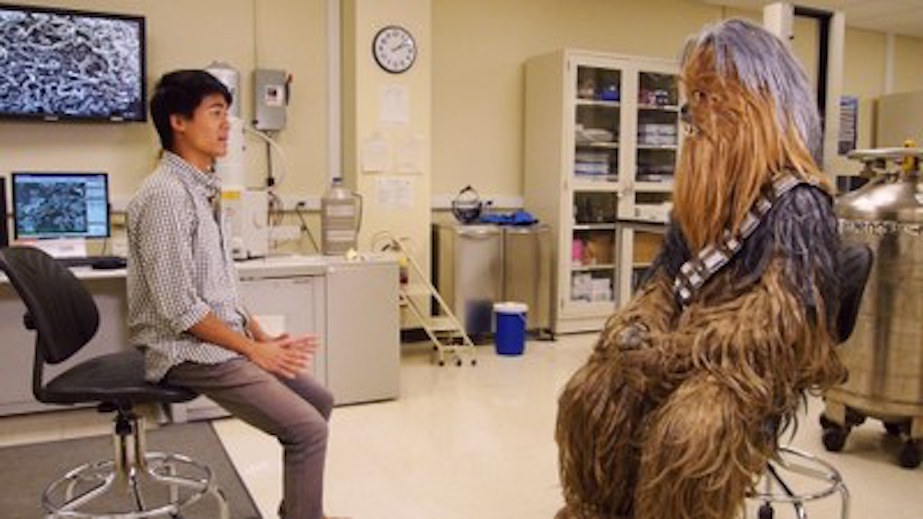 IMAGE:  Timothy Chan, senior, talks with Chewie about instantly freezing a person like Darth Vader did to Han Solo.

Can you instantly freeze a person like Darth Vader did to Han Solo? Theoretically, yes, says Timothy Chan, a senior studying materials science and engineering at U-M. Chan explains that freezing points depends not just on temperature, but also pressure. A technique called supercooling allows for a type of instant freezing. With pure enough water, you can lower the temperature to below the typical freezing point at Earth’s atmospheric pressure. Once it’s cooled down, just tapping on it introduces enough kinetic energy to instantly turn it to ice.

“They might have had some maybe liquid nitrogen or supercooled water that was already going to be solid at a certain pressure, dropped him in and boom, he’s completely solid,” Chan says. Bringing someone back, though? That would be a problem. 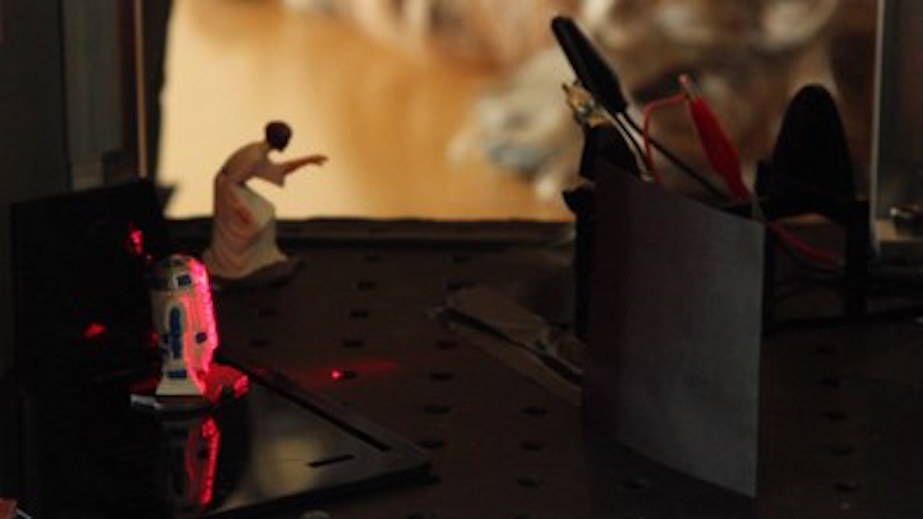 Hologram selfies and movies: Will they ever be a thing? Hard to say, but there’s a lot of technological advancement that would have to take place, says John Nees, an associate research scientist in electrical engineering and computer science at U-M. Holograms (first demonstrated at U-M in the 1960s) are recordings of light fields. They replay objects’ wavefronts. We can make them today with the aid of CMOS or CCD cameras, but their view field is rather limited.

“In real life I can see almost 180 degrees with my peripheral vision, but usually with electronic holography, the range of vision is limited to a few degrees,” Nees says. “So there’s a lot of advancement that needs to take place before we can really record electronically and play back holograms.”