by Kate McAlpine
Michigan Engineering
October 27, 2015
With new equipment that makes it the best in the world for quickly recreating the radiation damage sustained by materials inside nuclear reactors, the Michigan Ion Beam Laboratory (MIBL) marked its grand re-opening yesterday.| Medium Read
Enlarge 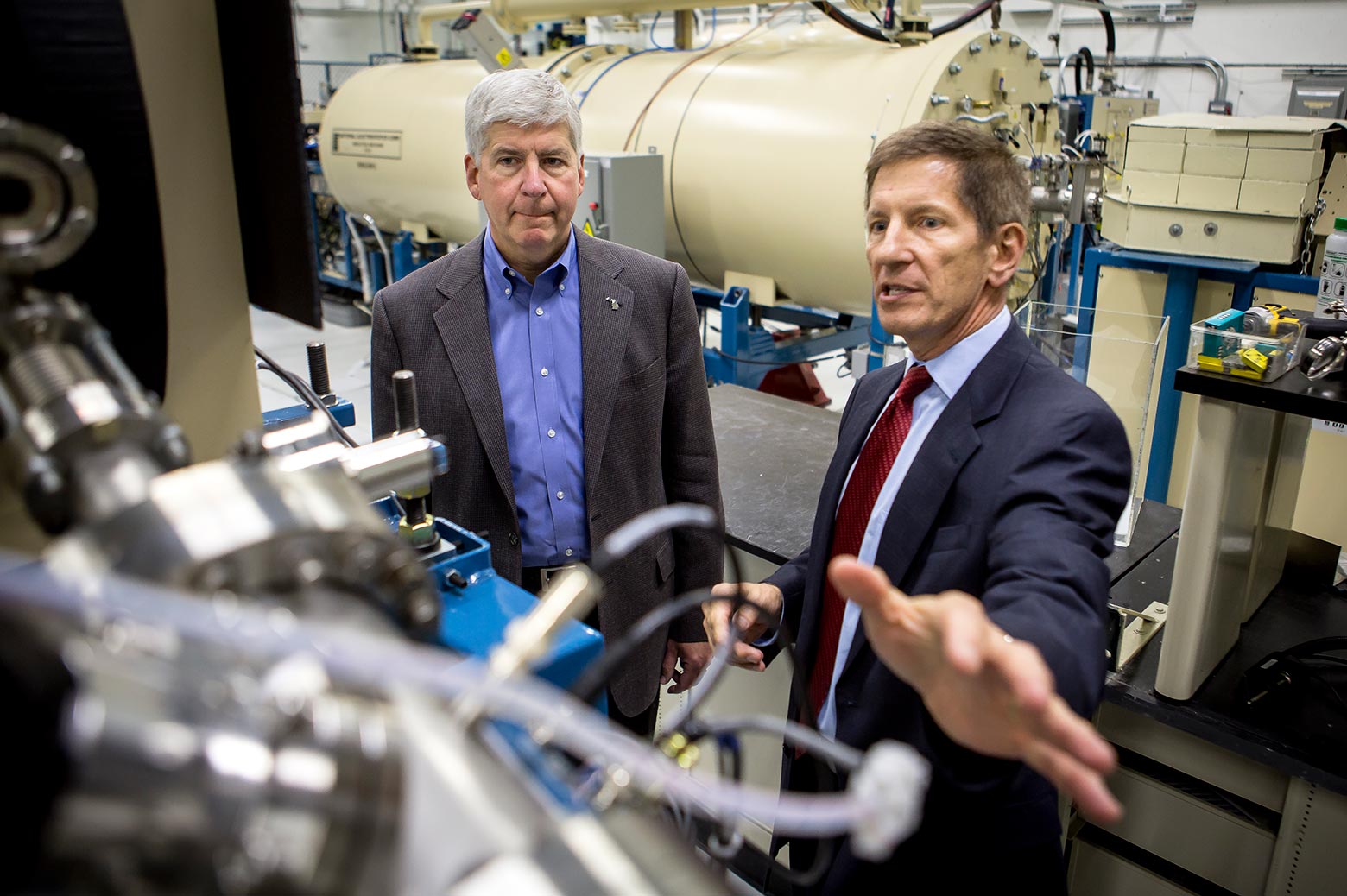 With new equipment that makes it the best in the world for quickly recreating the radiation damage sustained by materials inside nuclear reactors, the Michigan Ion Beam Laboratory (MIBL) marked its grand re-opening yesterday. The $3 million laboratory expansion added a third accelerator, which is crucial to accurately mimicking reactor damage.

“The new triple-beam capabilities of the Michigan Ion Beam Laboratory make this a world-class facility for studying radiation damage in materials. The experiments carried out at MIBL are critical for life extension of existing nuclear reactors and designing new generations of reactors,” said Ronald Gilgenbach, Chihiro Kikuchi Collegiate Professor and chair of the department of nuclear engineering and radiological sciences.

Rick Snyder, governor of Michigan, dropped in at the open house. “It’s great to be back on the U of M campus and see again leading research underway here,” he said. “Already, this lab is being visited by people from around the world.”

Advanced nuclear reactors could be safer and more efficient than the reactors running today. They could burn off the long-lived radioactive materials that necessitate spent fuel storage periods of hundreds of thousands of years rather than a more manageable timeframe, such as a few centuries. Or they could run on the same fuel for more than half a century. But these designs often involve more radiation in the core, and to build these reactors, designers must identify materials that can take that kind of beating for decades.

Testing these materials in research reactors would take decades as well. Getting up to high radiation doses requires the bulk of the time, but because the material ends up extremely radioactive, analysis takes several more years. The new facility speeds up the process so that the radiation part takes about a day and analysis can be done in just a few weeks.

“Ion irradiations, such as those being performed at the improved University of Michigan Laboratory, may provide a cheaper and faster scientific pathway for the qualification of materials needed for advanced nuclear systems over traditional methods,” Kelly added.

Gary Was, MIBL director and the Walter J. Weber, Jr. Professor of Sustainable Energy, Environmental and Earth Systems Engineering, has spent decades proving the reliability of these speedy tests. They produce damage that manifests itself like genuine reactor damage. 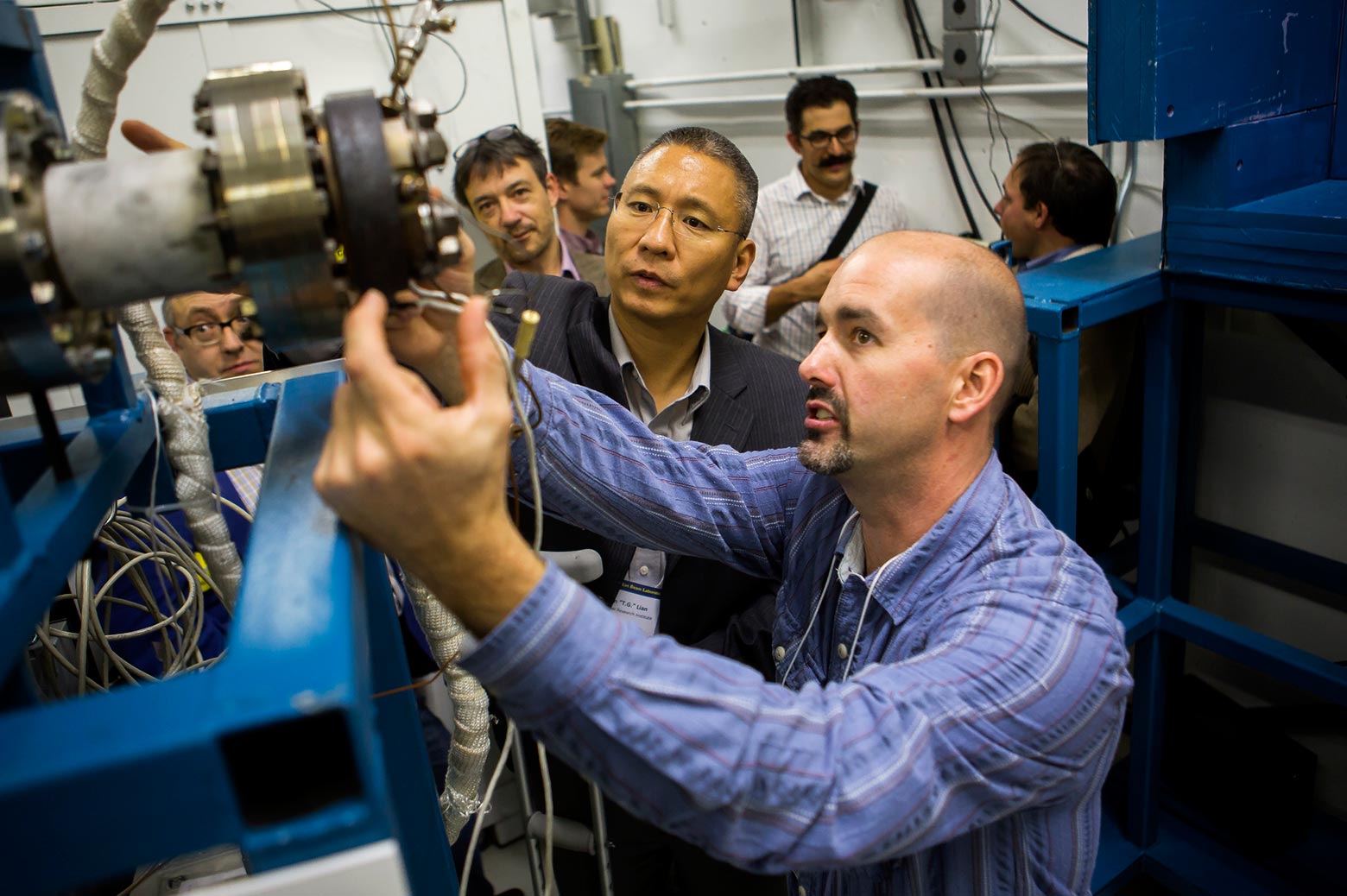 Reactor damage is mostly of two types: the displacement of atoms caused by the barrage of neutrons from the core, and hydrogen and helium gasses that build up when nuclear reactions occur inside the material. These forms of damage are simulated with three beams that shoot ions, or charged particles, into the test material. Hydrogen and helium beams mimic the gas build-up while the third beam mimics the damage without changing the material chemistry. For instance, it might shoot iron ions at a steel target.

Until the upgrade, the lab could only aim a single beam at the target. With the addition of a third accelerator and the ability to steer all three beams at one target, it can now produce the full range of radiation damage seen in reactors.

“The University of Michigan has long been a leader in ion beam experiments for emulating long-term effects of radiation on materials inside nuclear reactors. With this upgrade, the Michigan Ion Beam Laboratory is the premier facility, worldwide, for predicting lifetimes of reactor materials,” David Munson, Jr., the Robert J. Vlasic Dean of Engineering.

TerraPower, the Washington-based nuclear reactor company funded by Bill Gates, was a major donor for the lab expansion. It is developing the traveling wave reactor, which is designed to run for 60 years without refueling.

“TerraPower’s materials program relies on University of Michigan’s ion irradiation testing to rapidly test the performance of steel alloys and explore more advanced materials. Our examination of these irradiation tests will allow us to improve the durability and sustainability of components in the traveling wave reactor and greatly improve the inherent safety of individual plants, support new options for proliferation resistance, and lower electricity costs,” said Micah Hackett, Manager of Materials Development at TerraPower.

Mimicking reactor damage is the lab’s main purpose, but it will also help spur advances in other areas of materials science and nuclear engineering.

“The new capabilities at the University of Michigan will fill some holes in the scientific community that have developed over recent years as other facilities have shut down,” said Jeremy Busby, Director of the Division of Materials Science and Technology at Oak Ridge National Laboratory (ORNL) in Oak Ridge, TN.

“The ability to do triple beam irradiations is something that has not been possible since ORNL shut down its facility nearly 15 years ago. So, it’s great to see this capability recaptured in the U.S. as it allows for new experiments in alloy development, studies for fusion research and new forms of material characterization.”

The upgrade was made possible in part by a $5,000,000 grant from the Department of Energy (DOE) for studying radiation damage and further DOE support through ORNL. The project also relied on funding from TerraPower, the Electric Power Research Institute, the College of Engineering and the Department of Nuclear Engineering and Radiological Sciences.