Fluid motion induced by plasma interaction with water with self organization 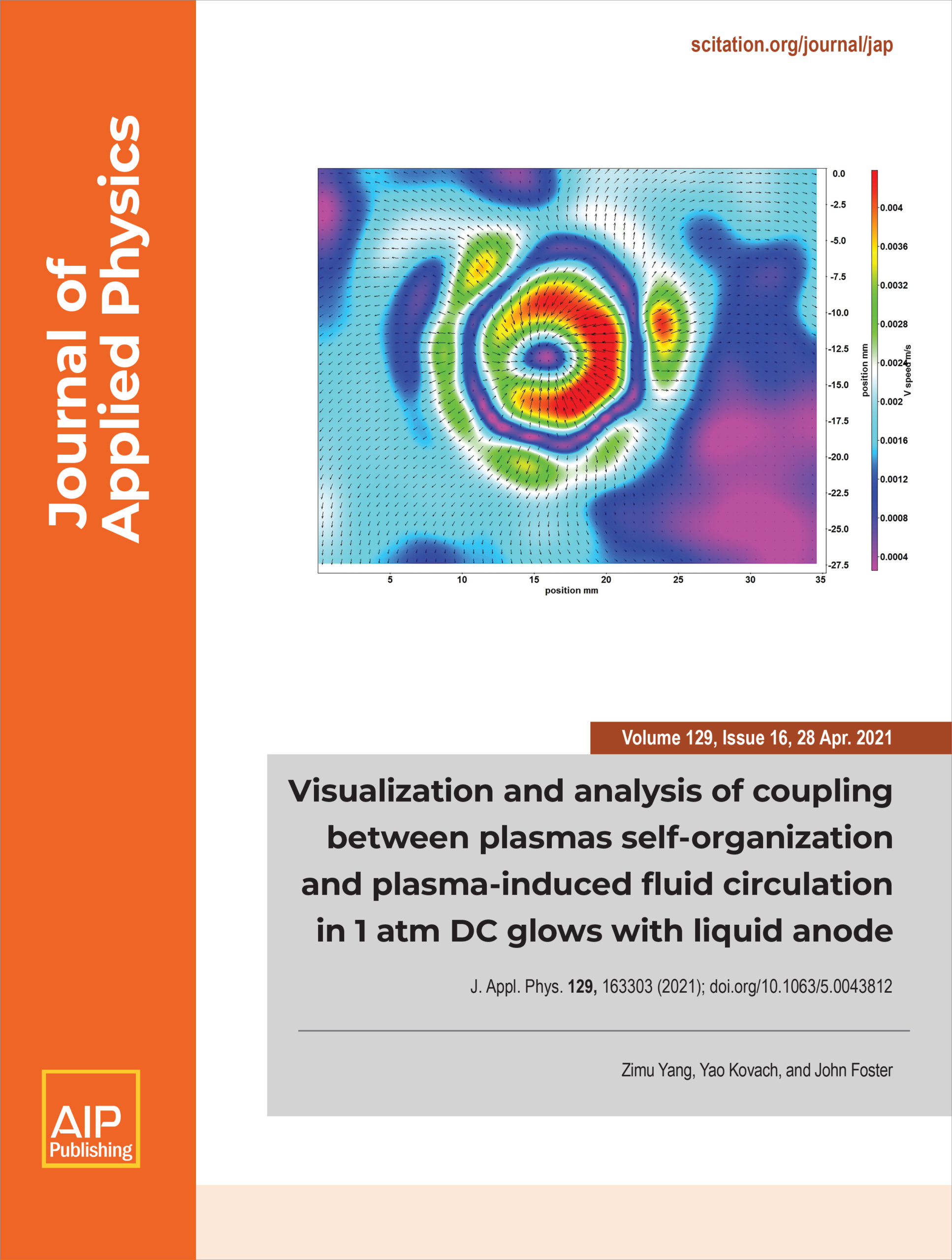 The interaction of plasma with liquid water can lead to very complex interactions, both mechanical and physical. Understanding the plasma liquid interaction is important not just from a basic science standpoint, but also from a technological point of view for applications such as plasma medicine and water purification.

Under certain conditions, plasma interacting with the liquid water can generate complex self-organized plasma attachments on the surface. The appearance of these patterns leads to induced flows in the water below the interface—but the mechanisms driving these flows are not well understood. Understanding such induced flows could provide insight into how to best transfer plasma-induced chemical reactivity into the bulk volume of the water by means of processes faster than simple diffusion. Zimu Yang, a PhD student in the U-M Department of Nuclear Engineering & Radiological Sciences (NERS), is studying this complex fluid interaction as part of a U.S. Department of Energy grant as part of this thesis research.

“In the process of plasma interacting with the liquid interface, excited ions and charged particles can accumulate at the interface and form a self-organized pattern,” said Yang. “The liquid phase, which functions as a dielectric barrier, was found highly dynamic during this interaction.”

Yang’s research mainly concentrates on finding the coupling mechanisms between the induced liquid phase motion and the self-organization pattern in a DC plasma-liquid discharge. Yang states that the “triggering and transport mechanisms are still mysterious.”

An induced liquid flow is stimulated under the contact point where plasma attaches to the liquid phase. To investigate the coupling mechanism, Yang uses particle imaging velocimetry (PIV) to study the flow field. This involves seed the water with tracer particles. By scattering laser light off the particles one can map the induced flow field.

The PIV measurements showed that the principle flow is triggered by thermal evaporation and also revealed the significant role of electrohydrodynamics force. The phenomenon and quantitative data produced by the research provided additional insight into the complex coupling mechanism between plasma discharge and mass, and heat transport in plasma-liquid interaction.

Yang’s paper, “Visualization and analysis of coupling between plasmas self-organization and plasma-induced fluid circulation in 1 atm DC glows with liquid anode,” was recently published in the Journal of Applied Physics and selected as the featured article for this month’s issue. Zimu’s co-authors include Dr. Yao Kovach, a former student on the project now graduated, and Prof. John Foster, Zimu’s advisor.

“The study, which is just a beginning, illustrates a broad spectrum of complex processes–many of which are still puzzling suggesting that further investigation of these induced flows is warranted,” said Yang. “The paper can help in the understanding of how thermal dynamics and electrohydrodynamics work together in the big picture of plasma-liquid interactions.”

Yang completed his undergraduate studies in the Nuclear Science and Technology Department at Harbin Engineering University in China. At NERS, he has been the GSI for NERS 575 (Plasma Generation and Diagnostics Laboratory) for the past two years. “This experience granted me a lot of exercise on experiment arrangement and mentoring,” said Yang. “I really enjoy teaching plasma theory and communicating with colleagues from different departments.”

Yang hopes to stay in the industry or research plasma for as long as possible. “Watching and contributing to a rising industry is exciting in all aspects,” he said.

“I am impressed with the speed at which Zimu got the PIV set up running,” said Prof. Foster. “I was even more impressed with the fascinating coupling that he observed between plasma morphology and induced flows. Literally, the shape of the plasma attachment determines the nature of induced flow. The implications are potentially significant from an applications standpoint. It shows how fundamental research can lead to findings with big technological implications. I congratulate him on his Feature article.”

“I really appreciate the mentoring and trust from Prof. Foster,” said Yang. I can’t imagine my progress and potential without him. Also, studying in NERS really makes me feel like living in a family where everyone enjoys and appreciates the active and healthy atmosphere.”