by Heather Guenther
January 20, 2021
The liquid electrolytes in flow batteries provide a bridge to help carry electrons into electrodes, and that changes how chemical engineers think about efficiency.| Short Read

The way to boost electron transfer in grid-scale batteries is different than researchers had believed, a new study from the University of Michigan has shown. The findings are a step toward being able to store renewable energy more efficiently.

As governments and utilities around the world roll out intermittent renewable energy sources such as wind and solar, we remain reliant on coal, natural gas, and nuclear power plants to provide energy when the wind isn’t blowing and the sun isn’t shining. Grid-scale “flow” batteries are one proposed solution, storing energy for later use. But because they aren’t very efficient, they need to be large and expensive.

In a flow battery, the energy is stored in a pair of “electrolyte” fluids which are kept in tanks and flow through the working part of the battery to store or release energy. An active metal gains or loses electrons from the electrode on either side, depending on whether the battery is charging or discharging. One efficiency bottleneck is how quickly electrons move between the electrodes and the active metal.

“By maximizing the charge transfer, we can reduce the overall cost of flow batteries,” said Harsh Agarwal, a chemical engineering PhD student and the study’s first author. He works in the lab of Nirala Singh, an assistant professor of chemical engineering. 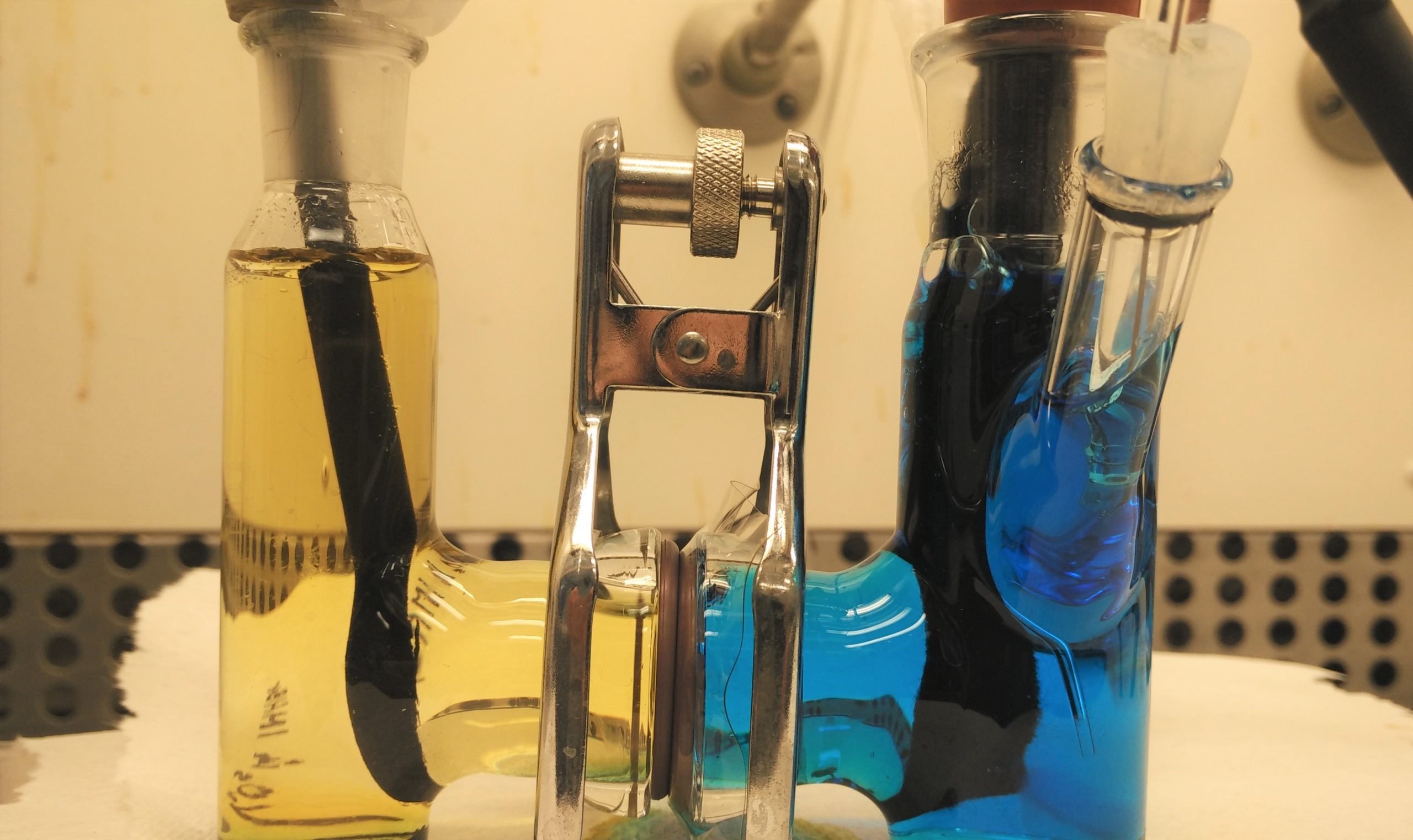 IMAGE:  A flow battery stores a pair of “electrolyte” fluids in separate tanks. The battery stores or releases energy as the fluids flow through the working part of the battery. An active metal gains or loses electrons from the electrode on either side, depending on whether the battery is charging or discharging. The rate at which this electron transfer occurs affects the efficiency of the battery. Credit: Harsh Agarwal, Singh Group, University of Michigan

Researchers have been trying different chemical combinations to improve it, but they don’t really know what’s going on at the molecular level. This study, published in Cell Reports Physical Science, is one of the first to explore it.

What Singh’s team found is that, contrary to what researchers had believed , the negatively-charged molecular groups from the acids didn’t provide more spots for electron transfer to take place on the battery’s negative electrode. Instead, they lowered the energy barrier of that transfer by serving as a sort of bridge between the active metal in the fluid—vanadium in this case—and the electrode. This helps the vanadium give up its electron.

“Our findings suggest that bridging may play a critical yet underexplored role in other flow battery chemistries employing transition metals,” said Nirala Singh. “This discovery is not only relevant to energy storage but also fields of corrosion and electrodeposition.”

The study shows that the reaction rate in flow batteries can be tuned by controlling how well the acid in the liquid electrolyte binds with the active metal.

“Researchers can apply this knowledge to electrolyte engineering or electrocatalyst development, both of which are important disciplines in sustainable energy,” said Agarwal. 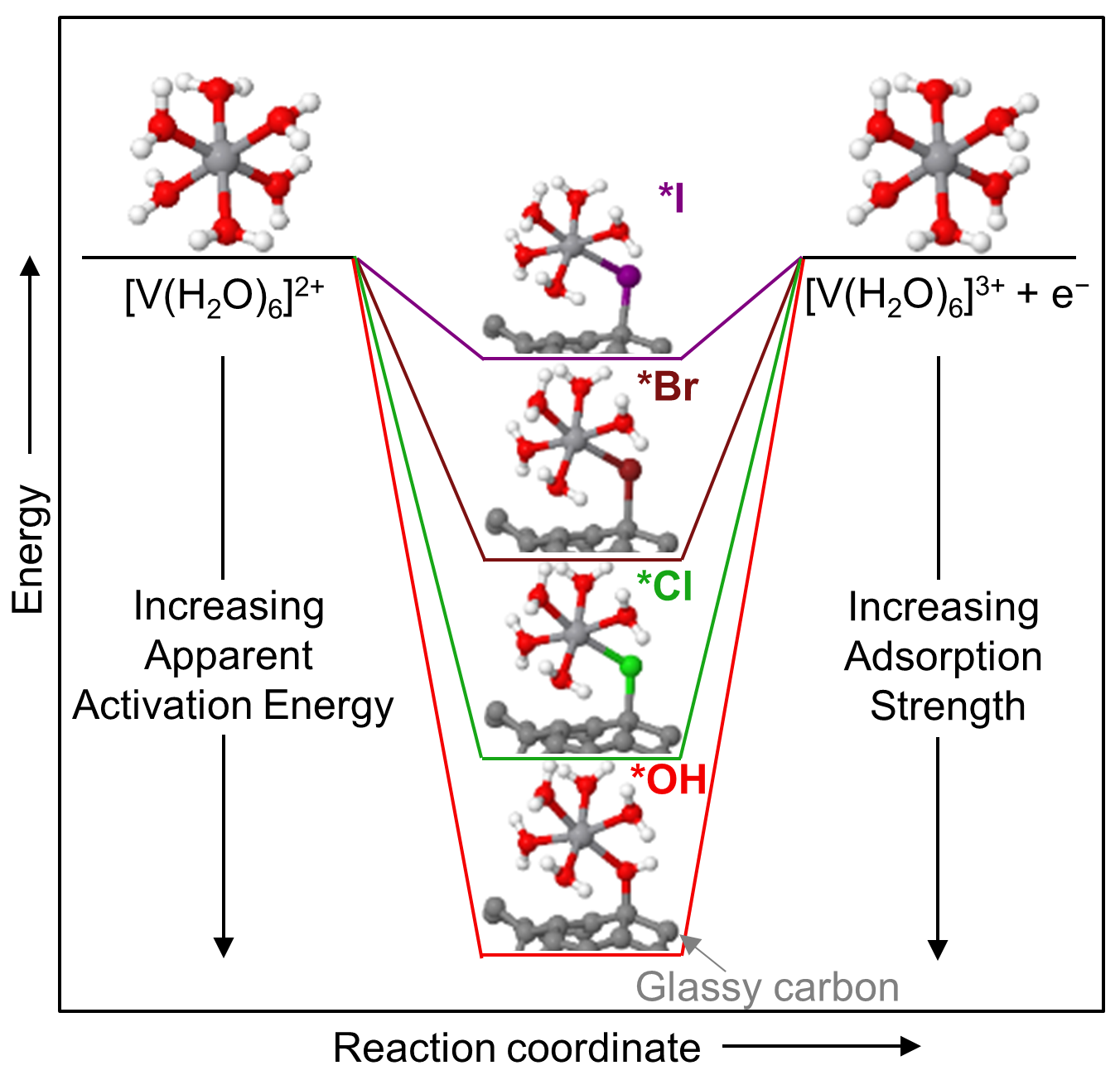 IMAGE:  A U-M team found that, contrary to what researchers had believed, the negatively-charged molecular groups from five different acidic electrolytes didn't provide more spots for electron transfer to take place on the battery's negative electrode. Instead, they lowered the energy barrier of that transfer by serving as a sort of bridge between the active metal in the fluid—vanadium in this case—and the electrode. This helps the vanadium give up its electron. Credit: Harsh Agarwal, Singh Group; and Jacob Florian, Goldsmith Group; University of Michigan

Agarwal and Singh measured the reaction rate between the vanadium and electrode for five different acidic electrolytes. To get a clearer picture of the details at the atomic level, the team used a form of quantum mechanical modeling, known as Density Functional Theory, to calculate how well the vanadium-acid combinations bind to the electrode. This part of the study was undertaken by Bryan Goldsmith, the Dow Corning Assistant Professor of Chemical Engineering and co-senior-author on the paper, and Jacob Florian, a chemical engineering senior undergraduate student working in the Goldsmith lab.

At Argonne National Laboratory, Agarwal and Singh used x-ray spectroscopy to discover details about how the vanadium ions configured themselves when in contact with different acids. Density functional theory calculations helped interpret the x-ray spectroscopy measurements. The study also provides the first direct experimental verification of how water attaches to vanadium ions.

The study is titled, “The Effect of Anion Bridging on Heterogeneous Charge Transfer for V2+/V3+.”

The work was supported by the University of Michigan Office of Research Grant (UMOR-29814). This research used the resources of the National Energy Research Scientific Computing Center (NERSC), Argonne National Laboratory, and the Canadian Light Source.