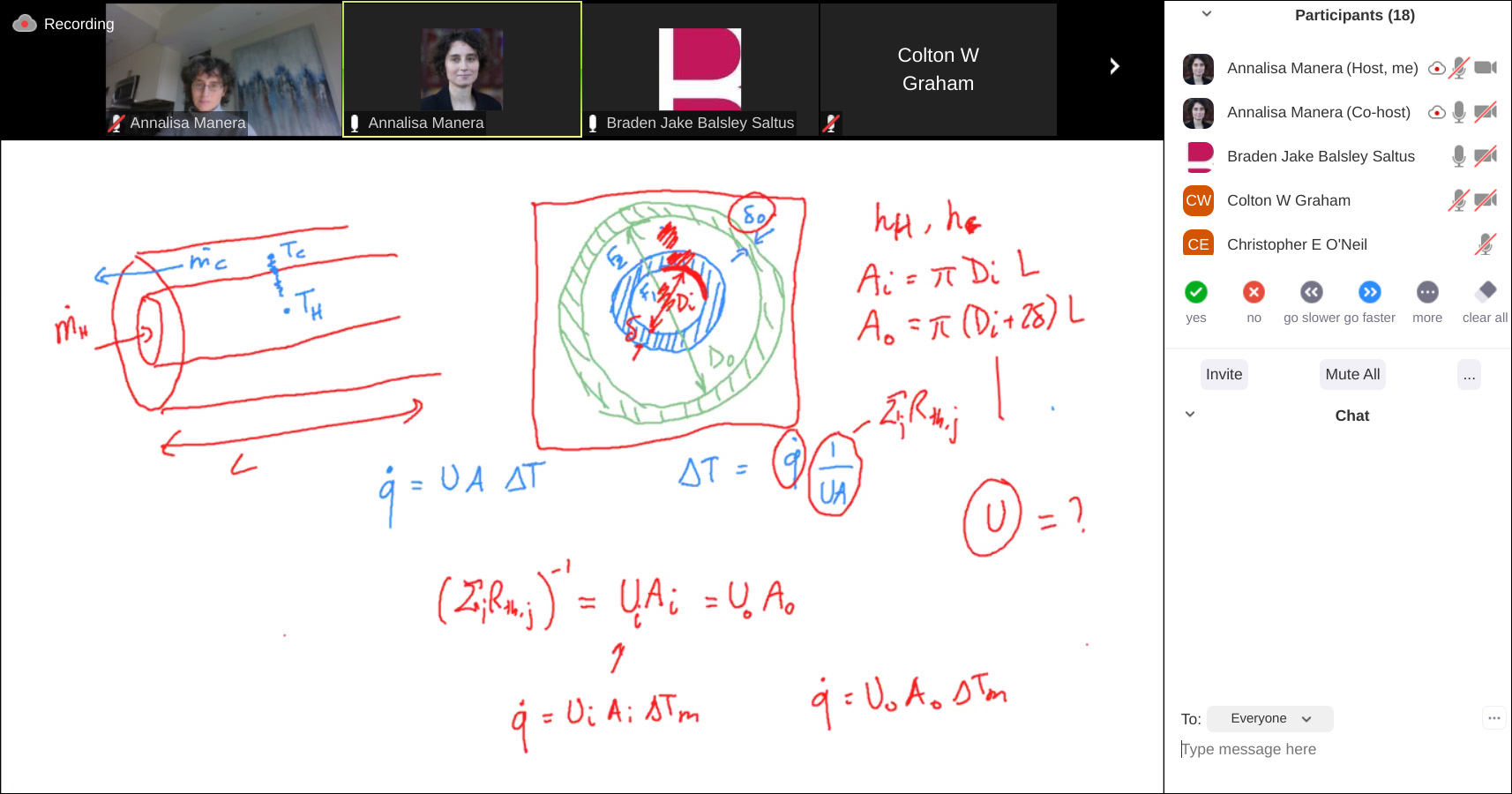 While a few classes have been allowed to meet in person this semester, many NERS classes have transitioned to a fully-online experience. Although professor Annalisa Manera said she was not really prepared for online teaching, she is receiving rave reviews from her students.

“Professor Manera has done an incredible job adapting to a virtual teaching environment,” said her student, Kaitlyn Barr. “Honestly, I look forward to her virtual class more than some of my in-person classes because it is much more engaging.”

Manera teaches NERS 444 Thermal-hydraulics for Nuclear Systems, and because of the challenges presented by this semester, she was forced to significantly redesign the course structure.

“At the very beginning of the course I asked students to fill a questionnaire,” Manera said. She asked them which of their fellow students they would be most comfortable working with in breakout rooms, and who had access to a stylus. “I divided the students into four groups—with a mix of students they selected as well as with a mix that they did not select.”

“The whiteboard feature is a good way to keep their attention—engage them and test on the fly whether the class material has been well understood.”Annalisa Manera
Tweet

Each group also has at least one member with access to a stylus, which allows Manera to make extensive use of Zoom’s whiteboard feature. The digital whiteboard allows her to interact with students in a way that using slides does not, as she can invite students to write on the whiteboard with her. The whiteboards are automatically saved on Manera’s computer, and she makes them available to students on CANVA after class.

During class, Manera carefully monitors the “raise hand” and “chat” functions in case any students have questions. She even connects with two laptops for maximum engagement. The first laptop is primarily a tool for monitoring student needs. She uses this one as her own camera and this is where she watches for questions and comments.

She calls the other laptop the “meeting driver.” It has a stylus so she can write on the screen, and she also uses it as her microphone.

“I organize the lecture in a way that it has natural breaks for quizzes and questions,” Manera said. “I will ask a question, make sure everybody understands the question, then launch a Zoom poll.”

Once students have submitted their answers, she shares the results of the poll and they discuss as a group. The whiteboard function often comes in handy during post-poll discussions.

“This is a good way to keep their attention,” said Manera. “Engage them and test on the fly whether the class material has been well understood.”

The composition of the breakout groups has remained the same throughout the semester. “Typically, I have two or more breakout sessions per class during which students solve a problem together or derive some part of theory based on what we just did in class,” Manera said.

After each session which generally lasts about 10 minutes, she asks for volunteers to write their findings on the whiteboard.

“When our time is up, we come back to the main session, and Professor Manera asks different students to walk her through solving the problem,” Kaitlyn said. “The example problems are my favorite part of class—they are a fun way to connect with my classmates as well as apply our knowledge in a collaborative environment.”

Each class session has a 7–8 minute break, during which the students suggested early on that they play a voluntary game of skribbl.io. “It makes the class interactions more human,” Manera said. Students keep their mics on so everyone can interact.

Though Manera says that the setup is not exactly perfect, feedback from her students has been overwhelmingly positive. “I am not 100% satisfied with my ‘product,’” she said. “I am still looking for ideas to engage the part of the class who are more reserved.” She looks to blogs from more experienced online instructors for inspiration.