by Hayley Hanway
EECS: Electrical and Computer Engineering
October 13, 2020
From adapting to remote office hours to completely redesigning exam content and format, we explore how one class, EECS 551 Matrix Methods for Signal Processing, Data Analysis, & Machine Learning, has had to reinvent itself for the times. | Medium Read
Enlarge 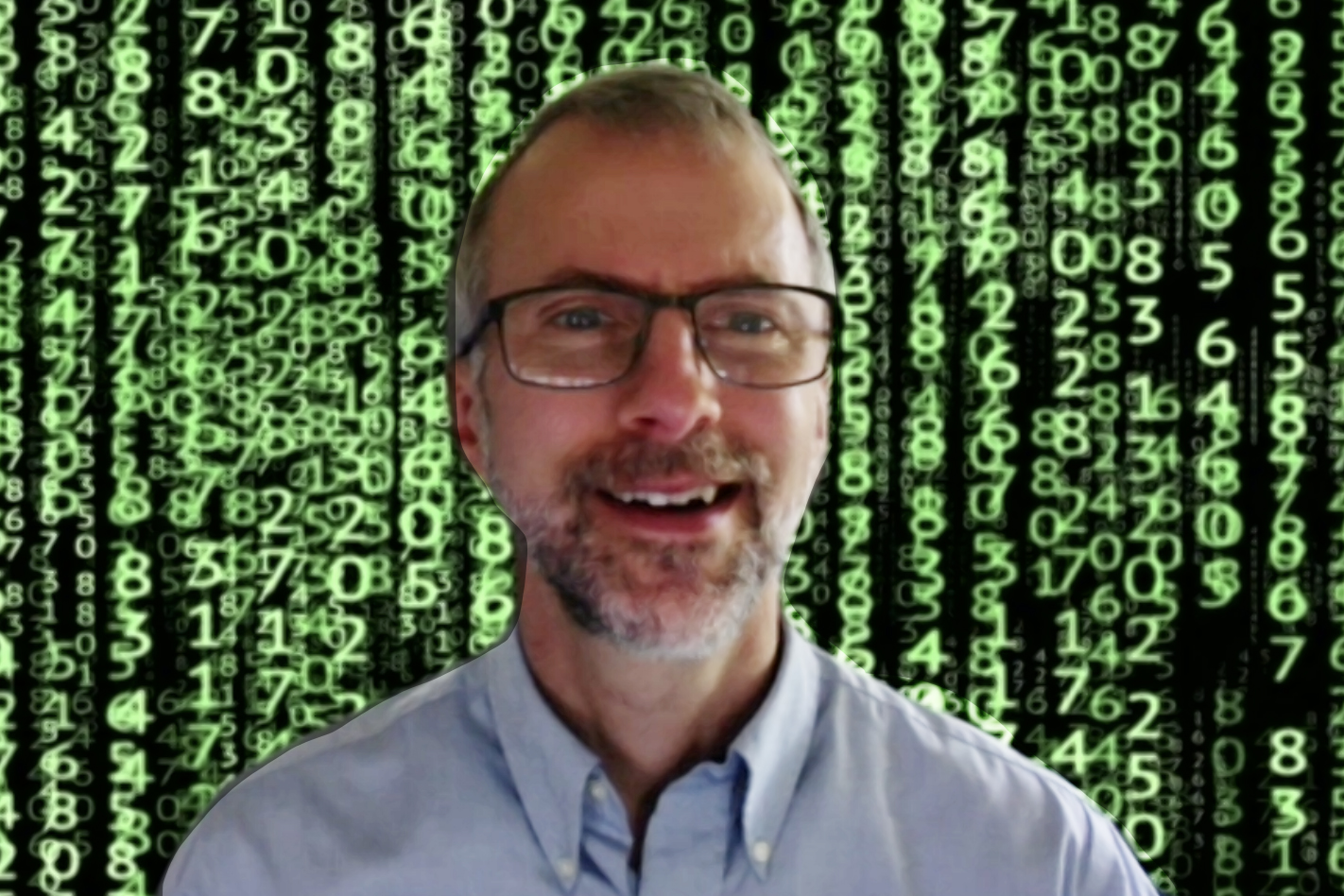 While a few classes have been allowed to meet in person this semester, most have transitioned to a fully-online experience. For Jeff Fessler, William L. Root Collegiate Professor of EECS, who’s teaching EECS 551 Matrix Methods for Signal Processing, Data Analysis, & Machine Learning, this semester, this means significantly redesigning the course structure while choosing a really cool matrix background for his Zoom lectures.

“The work load this semester feels fairly typical, but I’ve had to make a lot of adjustments for how I teach,” Fessler says.

The biggest change Fessler has made is with the exam structure. Typically, the exams are a traditional sit-down format where students are allowed to bring a few notes. That’s not feasible in an online setting, so Fessler has had to make the exams into a “take home” format, where each student gets 24 hours to complete it.

“It’s a lot harder to write an exam that’s open notes where students can access the internet,” Fessler says. “I’m using available software tools to make it harder to cheat, but we’re mostly relying on the Honor Code.”

What’s more, Fessler has added an additional exam, so there are now three midterms and a final to write and grade. The goal was to lessen the stress for students. More exams mean each exam is worth less of their overall grade, so a bad score on one is less damaging. In addition, for the first time, Fessler is allowing students to replace their lowest midterm score with their final exam score if they scored better on the final. He’s also allowing them to drop their lowest scored homework, which he’s rarely done before.

“I just think there’s a lot going on with life right now,” Fessler says. “With the stress of what we’re all going through, there are a lot of reasons someone might have a bad day. The most important thing is to be fair and consistent.”

I just think there's a lot going on with life right now. With the stress of what we’re all going through, there are a lot of reasons someone might have a bad day. The most important thing is to be fair and consistent.Prof. Jeff Fessler
Tweet

Only 60% of Fessler’s 110 students are currently in Ann Arbor, while almost 30% are in mainland China, and the rest are scattered across the U.S., Europe, and India. To accommodate the wide range of time zones and internet quality, Fessler records each lecture, so students may either join the live broadcast or watch the session on their own time. While this isn’t new – Fessler has allowed students to watch recordings of his lectures for several years – in the past, he wouldn’t provide any way to make up participation credit if a student missed a lecture.

“The Canvas quiz system is kind of clunky, but it helps students see if they’re keeping up with the material,” Fessler says.

Fessler says it’s been a particular challenge to lecture when he can’t always see his audience. Zoom limits the number of video screens he can see at one time, and many students prefer to leave their video off. That means he had no visual cues – such as facial expressions or eye contact – that help him gauge whether the students are following the material or are hopelessly perplexed.

“They’ve at least been asking a fair number of questions, so that’s helpful,” Fessler says.

Perhaps the most dramatic schedule change has been to the course’s office hours, which is when students can ask questions and get help directly from the instructors. A 7:30 or 8:00 AM office hour session would have been laughable in previous years (students aren’t known for being awake and on campus at that hour), but it’s now a valuable time slot for those joining from China or other dramatically different time zones.

Fessler and his GSIs, Caroline Crockett and Haowei Xiang, still offer typical office hour sessions during the week, but they find that even local students are willing to join the early morning sessions, for they can stay in their pajamas (with video off) and dial in during breakfast.

This new office hour format has offered some significant advantages in other ways as well. Students don’t have to jockey for space in a cramped office, and it’s much easier to virtually share a computer screen rather than have everyone crowd around a single monitor. It’s easier for students to pop in and ask a quick question, for they don’t have to physically make the journey across campus. Many students are dialing in just to listen while they work on the homework.

“I’d have to think about the logistics, but when we do eventually return to full in-person operations, I’d like to explore keeping some sort of virtual option for office hours, because I think it’s worked quite well,” Fessler says.

Discussion sections have been a bit more challenging, and Fessler credits his GSIs for being particularly attentive and creative in how they adapt to the new class format.

“I’ve found that incorporating quick questions or checkpoints throughout discussions and then letting students engage in multiple ways – responding verbally, using the chat, or using built in Zoom reactions – has been best,” Crockett says. “We also use breakout rooms every few weeks for longer group-based task work, which leads to really fantastic conversations with each of the groups.”

While some of the benefits of in-person collaboration are lost, one of the advantages of the virtual format is the live subtitles generated by Zoom. Every session comes with auto-generated subtitles, which are accurate enough to help students follow along with the material. Not only is it an improvement for accessibility, but it’s particularly helpful for non-native English speakers.