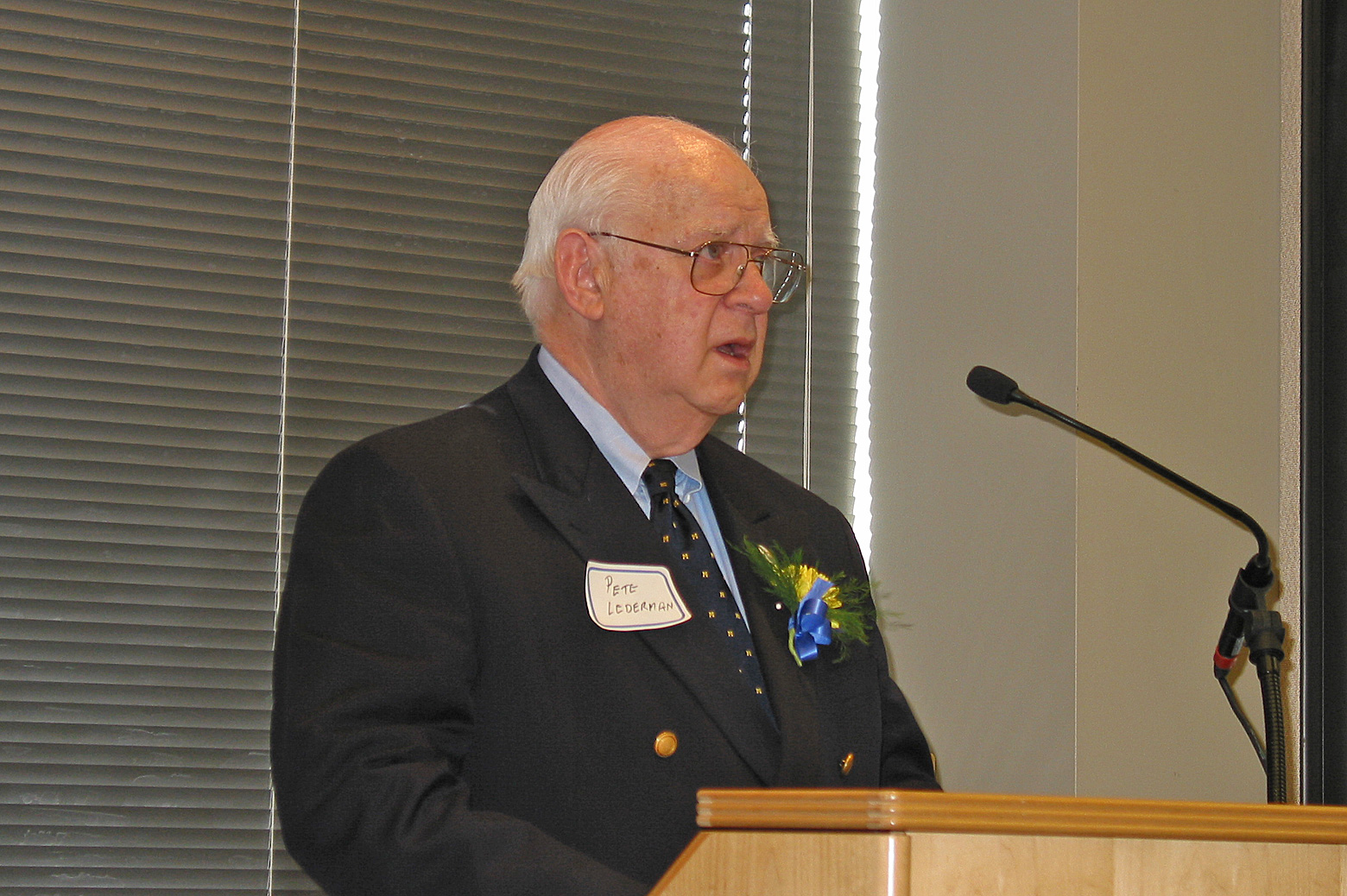 Peter B. Lederman—a beloved member of the U-M ChE alumni community—passed away June 9, 2020, of natural causes after a two-year battle with degenerative lung disease. Pete was 88 years old.

H. Scott Fogler, Vennema Professor and an Arthur F. Thurnau Professor, says of his colleague and friend, “He was one of the most loyal and supportive persons I have ever known. He genuinely cared deeply about the University of Michigan, the Chemical Engineering faculty and the students. He was also loyal and supportive of our national organization, AIChE, as evidenced by his participation in national meetings, service on many committees and being elected by the membership to the Board of Directors. He was an academic role model of service to one’s school and national organization. 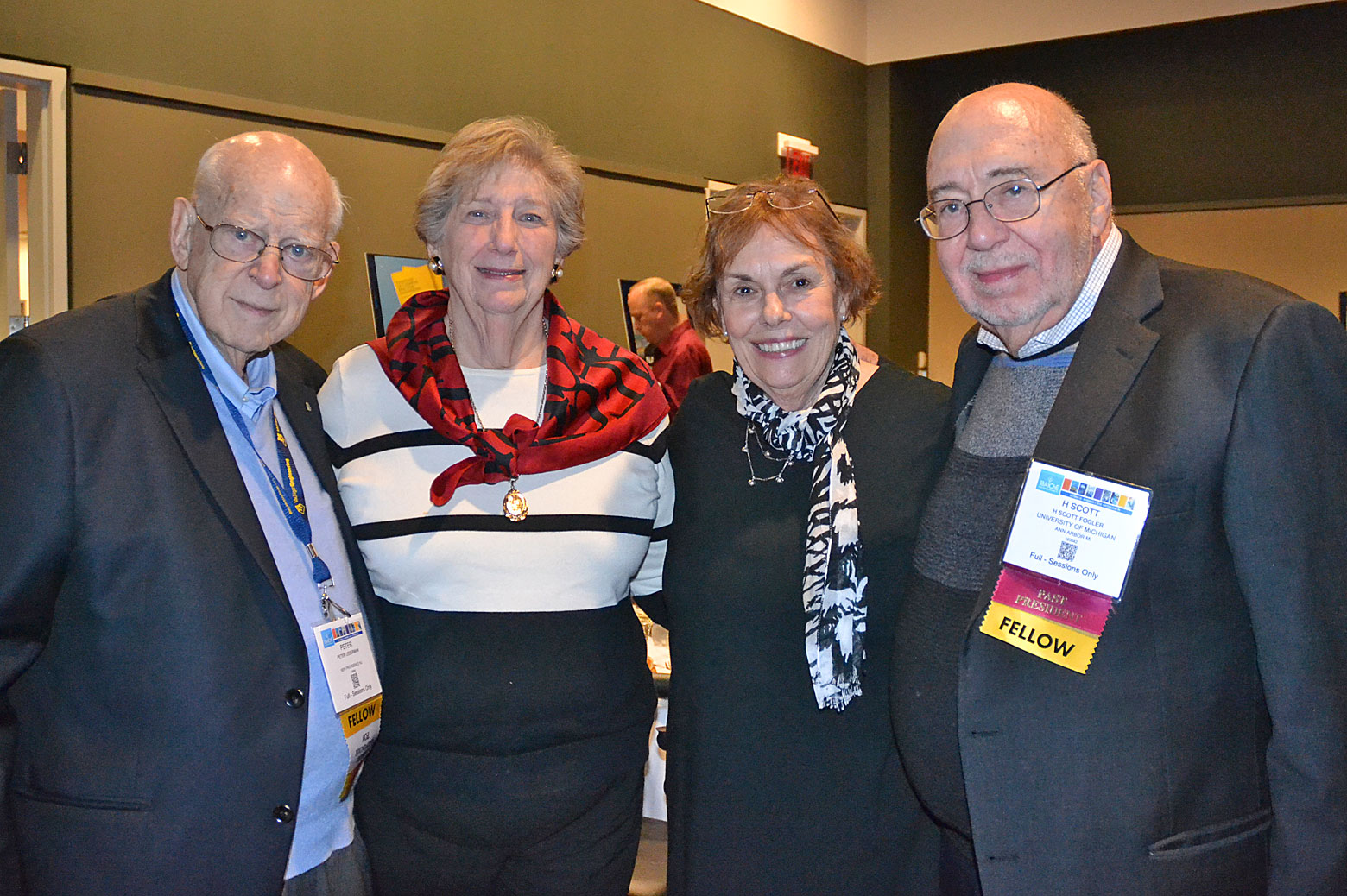 IMAGE:  Sue and Pete Lederman with Jan and Scott Fogler at the 2018 AIChE National Meeting in Pittsburgh.

A three-time U-M Chemical Engineering graduate (BSE ChE ’53, MSE ’57, PhD ’61), Pete was a significant contributor in all facets of environmental management and control and policy development, with extensive experience in the petrochemical industry. His career spanned 50 years, taking him to industry, government and academia as an engineer, manager, professor and executive.

Born Nov. 16, 1931, in Weimar, Germany, Pete was 7 years old when he and his family escaped Germany after living through Kristallnacht and the internment of his father in Buchenwald, eventually settling in the United States.

Pete received his BS in 1953 and after military service, he returned to Michigan to work as an instructor in the U–M Department of Chemical and Metallurgical Engineering (as the department was then named) from 1955–1960. While teaching, he completed his received his master’s degree in 1957 and his PhD a year later in 1961.

Pete had a deep commitment to Michigan and to the Chemical Engineering Department over seven decades, serving Michigan in a multitude of ways. Among his service to the department, he served as chair of the Michigan Engineering Alumni Society Board and of the Chemical Engineering Department’s External Advisory Committee; member of the College’s National Advisory Committee, and director of the U-M Alumni Association. In 2010, he received the College’s Alumni Society Distinguished Service Award.

Pete stands out for his loyalty, his deep and personal commitment to our department, and for the advice and guidance he offered both to the department over many years and to me personally upon being named department chair.Sharon Glotzer
Tweet

Together with Jim Wilkes, Pete organized an extensive fundraising campaign to endow the G. Brymer Williams Student Aid Fund, named for Pete’s advisor and mentor, who retired in 1983. The fund supports undergraduate students with financial need who are enrolled to study chemical engineering in the College of Engineering. 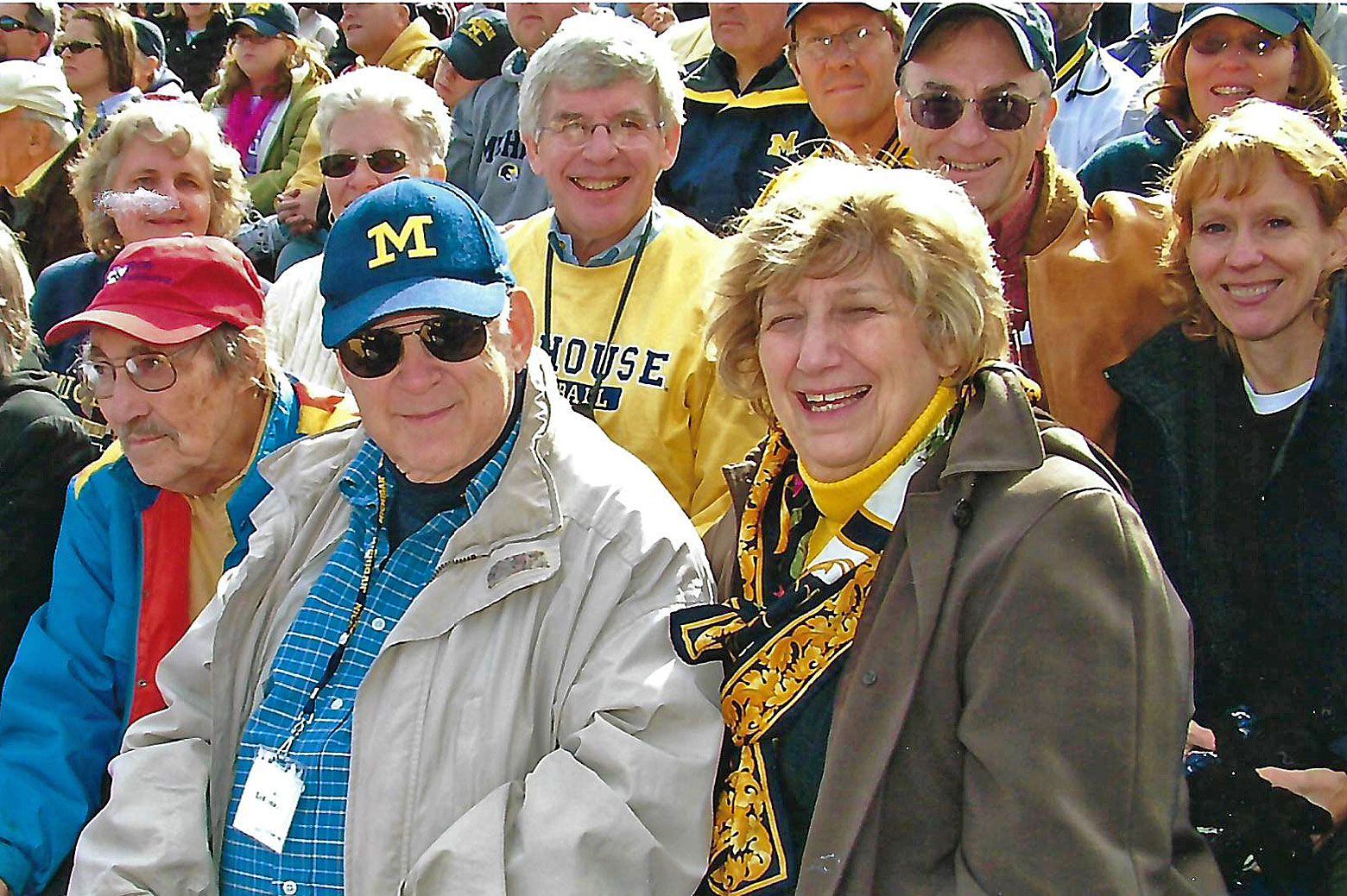 IMAGE:  Pete and Sue Lederman at a homecoming game with ChE alumni and friends. Stuart Churchill (BSE ’47, PhD ‘52) is on Pete's right.

Susan Montgomery (BSE ChE ’84), Academic Coach, Engineering Center for Academic Success, says, “Peter was one of our most generous alumni. He often replied to many of the emails I sent out to the alumni email group with words of encouragement, would forward me relevant articles and job announcements, and he and Sue made the time to come to campus every year for homecoming and other events. They were also very active with the Williams scholarship fund, attending scholarship banquets and befriending the recipients. His advice to all was to ‘try to find a job in an area of work that you will enjoy. You will do better if you are enjoying your work.’ He was a personal mentor to me, and I will miss his wisdom.”

“Pete stands out for his loyalty, his deep and personal commitment to our department, and for the advice and guidance he offered both to the department over many years and to me personally upon being named department chair, says Sharon C. Glotzer, the Anthony C. Lembke Department Chair of Chemical Engineering. “He was a warm and wise person with exceptional insight and a clever wit.”

Beyond Pete’s contributions to the Michigan Chemical Engineering community, his career included positions at many different companies. These include Shell and Esso as a Chemical Engineer, as Vice President for Research at Cotrell, and as a Vice President at Roy F. Weston, a large environmental engineering firm. Pete held academic positions at the University of Michigan (instructor); the Polytechnic Institute of Brooklyn (now a part of New York University; Associate Professor); the Center for Environmental Engineering at the New Jersey Institute of Technology (Director until he retired in 2000); and taught environmental engineering in Bangkok, Thailand.

Among Pete’s government sector experience, he worked at the U.S. Environmental Protection Agency in its infancy as director of its Industrial Hazardous Waste Treatment Laboratory. He also headed the National Academy of Sciences Committee on the destruction of the U.S. stockpile of chemical weapons.

Pete was also active in the AIChE community, where he was a fellow, chaired the Environmental Division, provided leadership to numerous committees, and served as a director of its Foundation. He also became an early advocate for inclusivity, helping develop programs for young engineers and women.

Pete published over 100 papers, co-authored several patents, served on the advisory boards of Environmental Progress and Chemical Engineering Progress, and was a licensed Professional Engineer in at least 30 states.

Among the highlights of Pete’s many accolades, he was honored by the USEPA (Silver Medal for Superior Service), AICHE (Service to Society Award for his work on chemical weapon demilitarization; Van Antwerpen Award for Service to the Institute; and Lawrence K. Cecil Award in Environmental Chemical Engineering), and the Academy of Environmental Engineers (Stanley E. Kappe Award).

When Pete and his wife, Sue (BA ’58), made a generous bequest gift to the Department of Chemical Engineering in 2015, Pete spoke of his longtime service to his alma mater, “The University of Michigan has been a very important part of my professional and personal life for more than 60 years.”

Pete was an important member of and friend to the U-M Chemical Engineering community, and he will be sorely missed.

Pete is survived by his wife, Susan, and his children, Stuart, Ellen (Thom LeFevre), and his three granddaughters: Jordan and Emerson Lederman and Emma LeFevre.

Gifts in Pete’s memory should be given to the  G. Brymer Williams Student Aid Fund – 729748. Established to honor Chemical Engineering Professor G. Brymer Williams, this endowed fund supports undergraduate students with financial need who are enrolled to study chemical engineering in the College of Engineering. Or alternatively to the Temple Sinai Endowment Fund, 208 Summit Avenue, Summit New Jersey 07901.