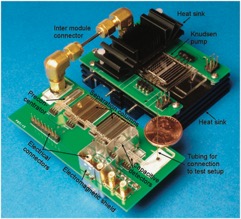 IMAGE:  Photograph of the iGC3.c2 system. One of the Knudsen pump heat sinks has been removed to reveal the inner structure.

All the components in Gianchandani and Qin’s fully electronic micro gas chromatography system are lithographically microfabricated, making it easier to manufacture. The system detects and analyzes minute concentrations of several common volatile organic compounds (VOCs), which contribute to indoor air pollution. VOCs can be serious health hazards, and some, such as benzene, are known carcinogens.

Gas chromatography has long been used as a means to evaluate air quality, but typical commercial gas chromatographs are large, difficult and expensive to manufacture, and aren’t portable.

“In order to do an analysis, people would have to collect a sample in the field and bring it to the lab,” Qin says. “We made a smaller, portable system, so that we can carry the instrument to the field instead.”

Gianchandani and Qin built and integrated the entire system including all components like a microfabricated pump, a preconcentrator, separation columns, and a pair of capacitive detectors. Unlike tradition systems, which contain mechanical and optical components, Gianchandani and Qin’s system is fully electronic, making it easier to integrate and mass produce.

Currently, Gianchandani and Qin’s chromatograph is programmed to detect and analyze 19 chemicals – including alkanes, aromatic hydrocarbons, aldehydes, halogenated hydrocarbons and terpenes – but they are working on expanding its capabilities to detect many other pollutants as well. They’ve licensed their work to Omniscent, a startup co-founded by Gianchandani and Qinin in 2016.

Gianchandani is a professor in the Department of Electrical Engineering and Computer Science (EECS) and CTO of Omniscent. Qin is an assistant research scientist in EECS, and Chief Sensor Architect of Omniscent.

This research is done in conjunction with the Center for Wireless Integrated MicroSensing and Systems (WIMS2). The facilities used for this research included the Lurie Nanofabrication Facility.