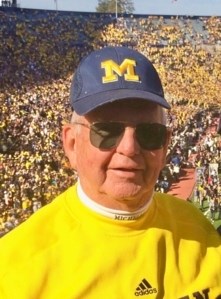 Gary Cook, longtime Ford Nuclear Reactor (FNR) Assistant Manager and friend of the department, passed away on May 21, 2020. During his time in the Department of Nuclear Engineering and Radiological Sciences (NERS), he made many contributions to the safe and smooth operation of the FNR.

For 32 years, Cook was a reactor operator, shift supervisor, supervisor of reactor operations and assistant reactor manager for the FNR. “Gary knew the Ford Nuclear Reactor like no-one else,” said NERS professor David Wehe. “From years and years of experience, he knew what fuel to load, where to load it, and what experiments could be run safely. He knew his reactor operators like his children and ensured that every shift was covered by compatible and well-trained staff. While there were committees to analyze and approve proposed experiments, the ultimate authority was Gary. He knew what materials worked well in the reactor. Any student was wise to consult with him prior to stepping onto the reactor floor.”

Wehe also said, “Such sad news about such a wonderful man. Gary represented the very best of the FNR—his experience and common sense always won the day and kept us safe. His loss will leave a permanent hole in U-M’s nuclear world. Administrators came and went, as did rules and regulations, but Gary kept us all safe and the students could focus solely on their studies. He was such a fine and irreplaceable gentleman.”

The bird strike incident is somewhat of a legend within the department. During a softball game next to the Cooley Laboratory where the reflection pool now sits, NERS alum Ward Rigot pulled a pitch and sent it through a second story Phoenix Memorial Laboratory (PML) window (allegedly). Ginny, Rigot’s wife, was working in a radiochemistry lab near the broken window. Wehe recalls, “Gary ruled it as a bird strike that broke the window since he knew Ward would pay dearly at home.”

“I relied, with full confidence, on Gary for any technical issues as well as historical decisions made over the years on the Ford Nuclear Reactor during my tour of duties at the FNR/PML. He was also a good friend to me and I will surely miss him,” said NERS professor John Lee.

“Gary was a mentor, friend, second father at times to many my age (including myself), and a great person. He will be missed dearly,” said Rob Blackburn, NERS facilities manager.