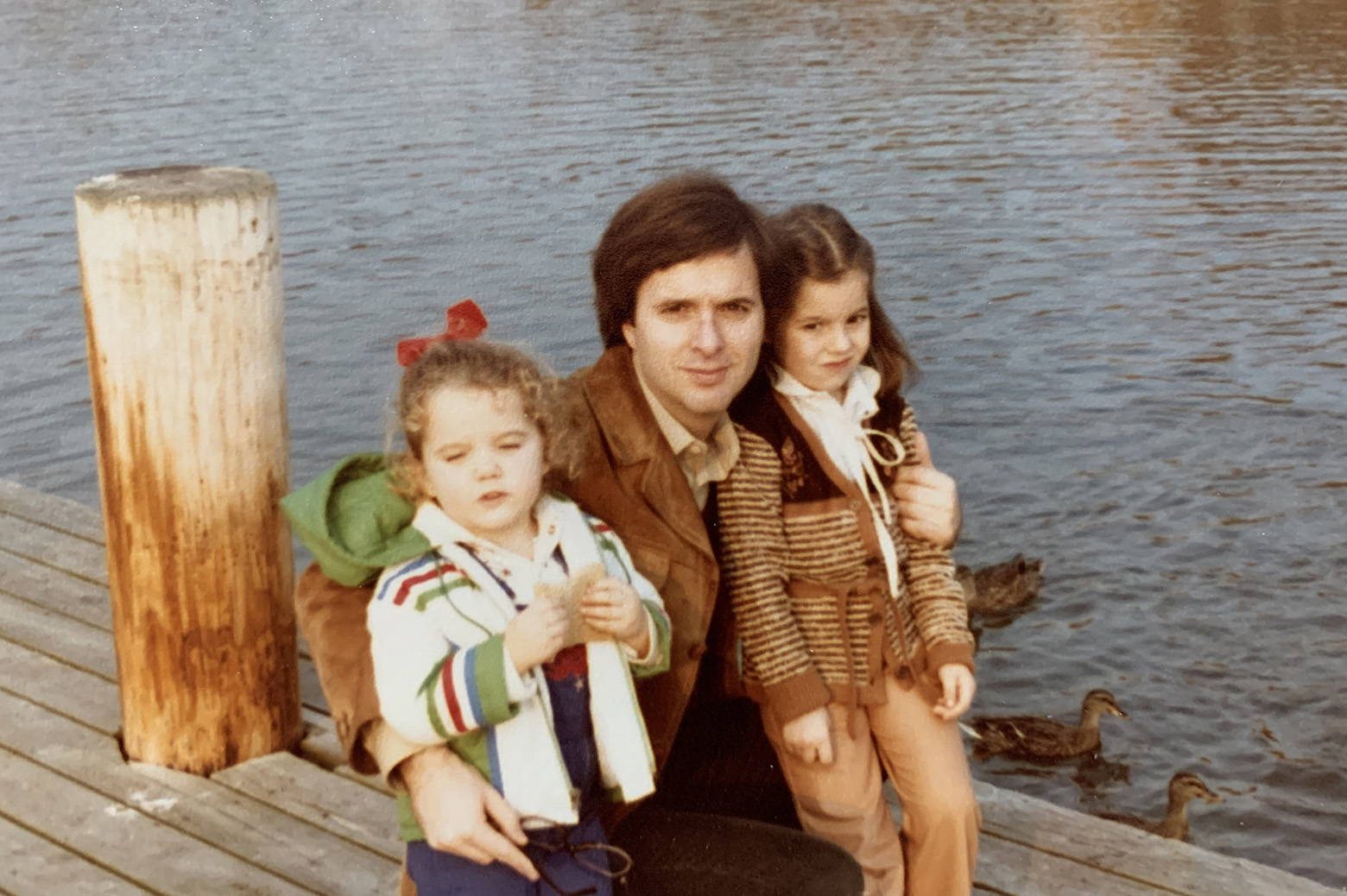 IMAGE:  Nikolaos Katopodes with his daughters at Geddes Lake in 1981, the first month they moved to Ann Arbor.

Professor Nikolaos Katopodes’s CV lists a litany of awards, presentations, visiting professorships and publications, but that only shows half of the story — it’s impossible to quantify the impact he has made on his students and colleagues in his forty-plus years of institutional and global service. It is only through hearing from former students and fellow professors that Professor Katopodes’s impact is truly felt.

“Nik is the most unselfish faculty member I know. He consistently seeks ways to help others, and it is due in large part to his support and mentorship both as Department Chair and as a senior colleague that I have had the success that I have enjoyed,” writes CEE Professor Jeremy Semrau. On the occasion of his retirement, we’re looking back on just some of the ways that Professor Katopodes has supported the advancement of his students, the university and the profession as a whole.

From the outset, Katopodes has made waves in his fields of research. Working in theoretical and applied fluid mechanics, surface hydrology, wave mechanics, environmental sustainability, and industrial multi-phase flow applications, Katopodes’s models are employed in industries across the globe. Early in his career, he published a paper on zero-inertia waves for overland flow and surface irrigation design, and the resulting software and design method has led to significantly improved water application efficiencies around the world. 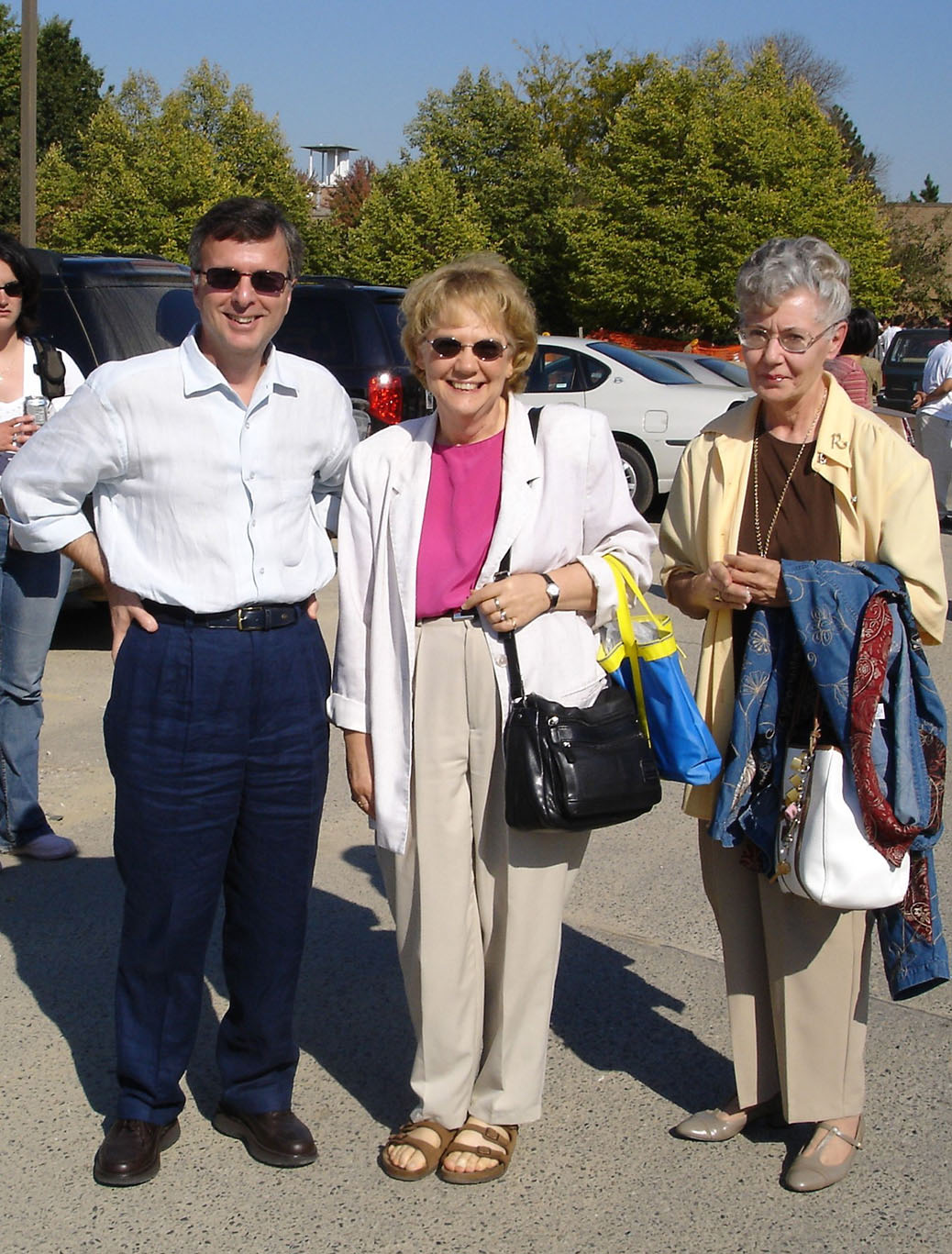 In the years since, Professor Katopodes has created several pioneering computational models, including but not limited to the first three-dimensional dam- and levee-break model; the first dissipative Galerkin finite-element model for open-channel flow (NELEUS); a finite volume model that has found numerous applications in practice including wave run-up, dam-break analysis and overland flow (OFM); and REFLEX, a chemical and oil spill model which is in use in many countries. During the last ten years, Katopodes and his team developed a wet-clutch engagement model (GROOVE) that has been used by several manufacturers of automatic transmissions around the world.

Katopodes’s innovative approach to his work has garnered international recognition; he holds fellowships at the Alexander von Humboldt Foundation, the American Society of Civil Engineers (ASCE), the Dutch Science Foundation, the German Research Society and the Japan Society for the Promotion of Science. Similarly, he has delivered 25 keynote lectures nationally and abroad.  In 2013, the University of Thessaly awarded Professor Katopodes an honorary doctorate in recognition of his contributions to Environmental Fluid Mechanics.

Though his success in research has led to international acclaim, Katopodes’s true passion is teaching. In his tenure at U-M, Professor Katopodes has developed six new courses and has taught fluid mechanics and numerical methods in eight different College of Engineering departments. Former students often speak of his dedication and guidance, emphasizing his willingness to go above and beyond as an educator.

“As an instructor and mentor, Professor Katopodes has inspired, challenged and encouraged me. During lectures, his colorful mannerisms and passion for teaching were engaging and motivated me to deeply connect with complex concepts,” writes former MSE student Parisa Shabhaz. “He has been supportive of my goals and was instrumental in my success obtaining acceptance into graduate study and funding for an international internship. Without Professor Katopodes I would not be on the path to success that I am on today.”

It is perhaps no wonder, then, that Katopodes’s commitment to education has resulted in both Departmental and College Excellence in Teaching Awards, the University of Michigan Distinguished Achievement Award, the Monroe-Brown Foundation Education Excellence Award and two James A. Robbins Awards from Chi Epsilon.

Professor Katopodes similarly excelled in institutional service. In his tenure as department chair from September 2001 to December 2006, Katopodes secured a grant that aided in a junior faculty mentoring program. During this time, he also organized U-M’s student chapter of the ASCE and led the university’s steel bridge team, which won the regional competition four years in a row and won the national championship in 2004.

From 1996 to 2000, Katopodes served as Mathematics Liaison for the College of Engineering, at which point he helped procure a grant from the Fund for the Improvement of Postsecondary Education (FIPSE) program of the Department of Education that aided in restructuring sophomore mathematics at U-M. He has also procured grants from the Michigan Center for Research on Learning and Teaching (CRLT), which he used to develop software for autonomous learning in hydrology and a series of computational fluid mechanics films.

“Nik will be very much missed around the department,” said Donald Malloure Department Chair Jerome Lynch. “His commitment to his students, colleagues and research has been an example for all of us to follow.  Speaking for myself, Nik was extremely generous to me as the department chair that hired me – his leadership in both CEE and the profession has been an inspiration to me.”

Outside of U-M, Professor Katopodes has contributed to engineering education by chairing the ASCE Committee on Education in Computational Hydraulics and founding the Big 10+ Civil and Environmental Engineering Department Heads Council. In 2018, Katopodes’s Free-Surface Flow series of textbooks was published. As a culmination of his research and years developing three graduate courses on fluid mechanics, the series is a testament to the care that Katopodes has taken in his pedagogy. 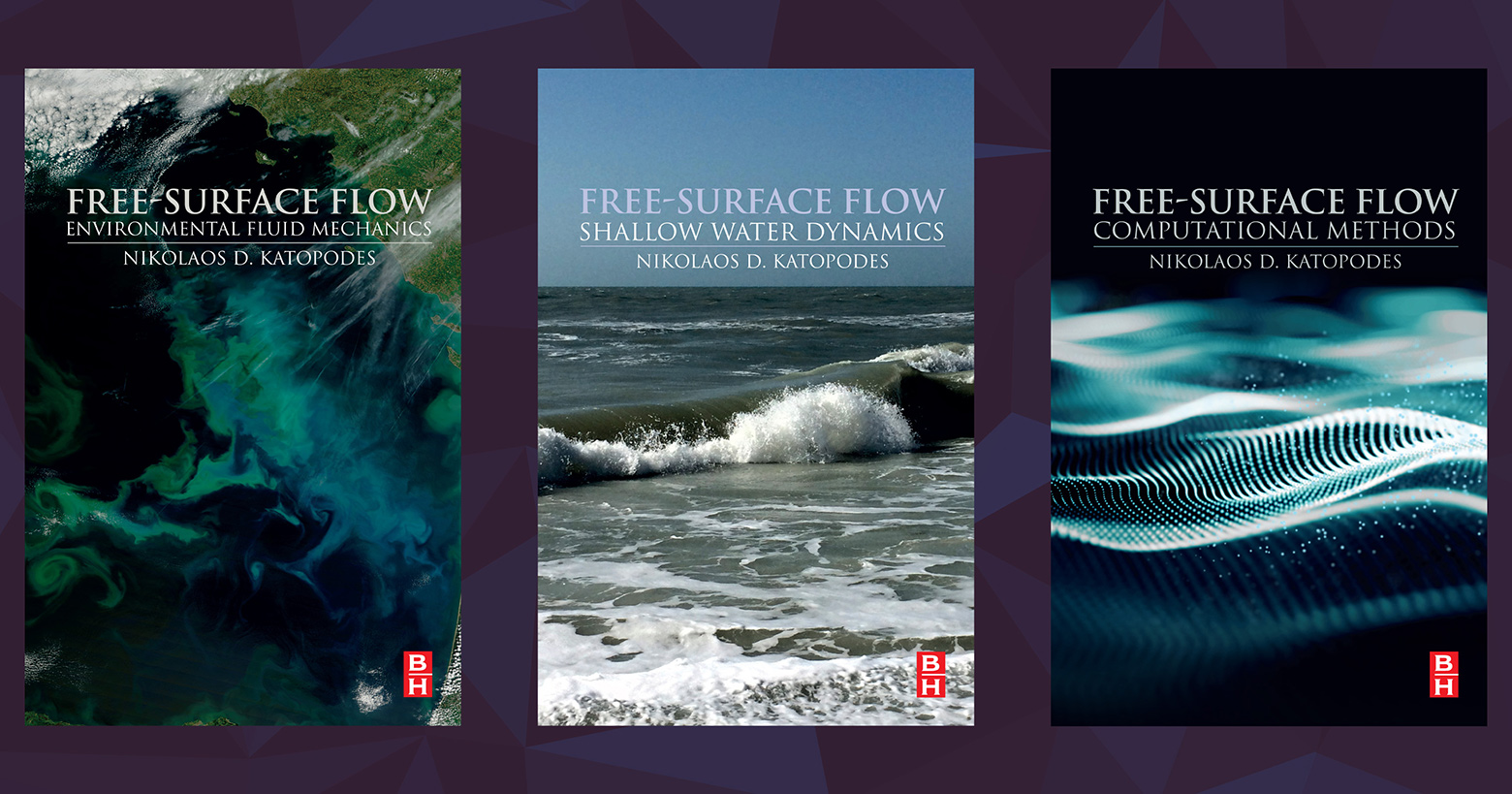 IMAGE:  The three books in the Free-Surface Flow series

Just as Katopodes’s research has earned him global recognition, so too has he been recognized as a phenomenal teacher. Over the span of his career, Professor Katopodes has held visiting positions at institutions around the world, including at Aristotle University in Greece, Delft Hydraulics in the Netherlands, Chuo University in Japan and the Universities of Hanover and Karlsruhe in Germany. In recent years, Katopodes served as President of the Board of Regents of the Technical University of Eastern Macedonia and Thrace. 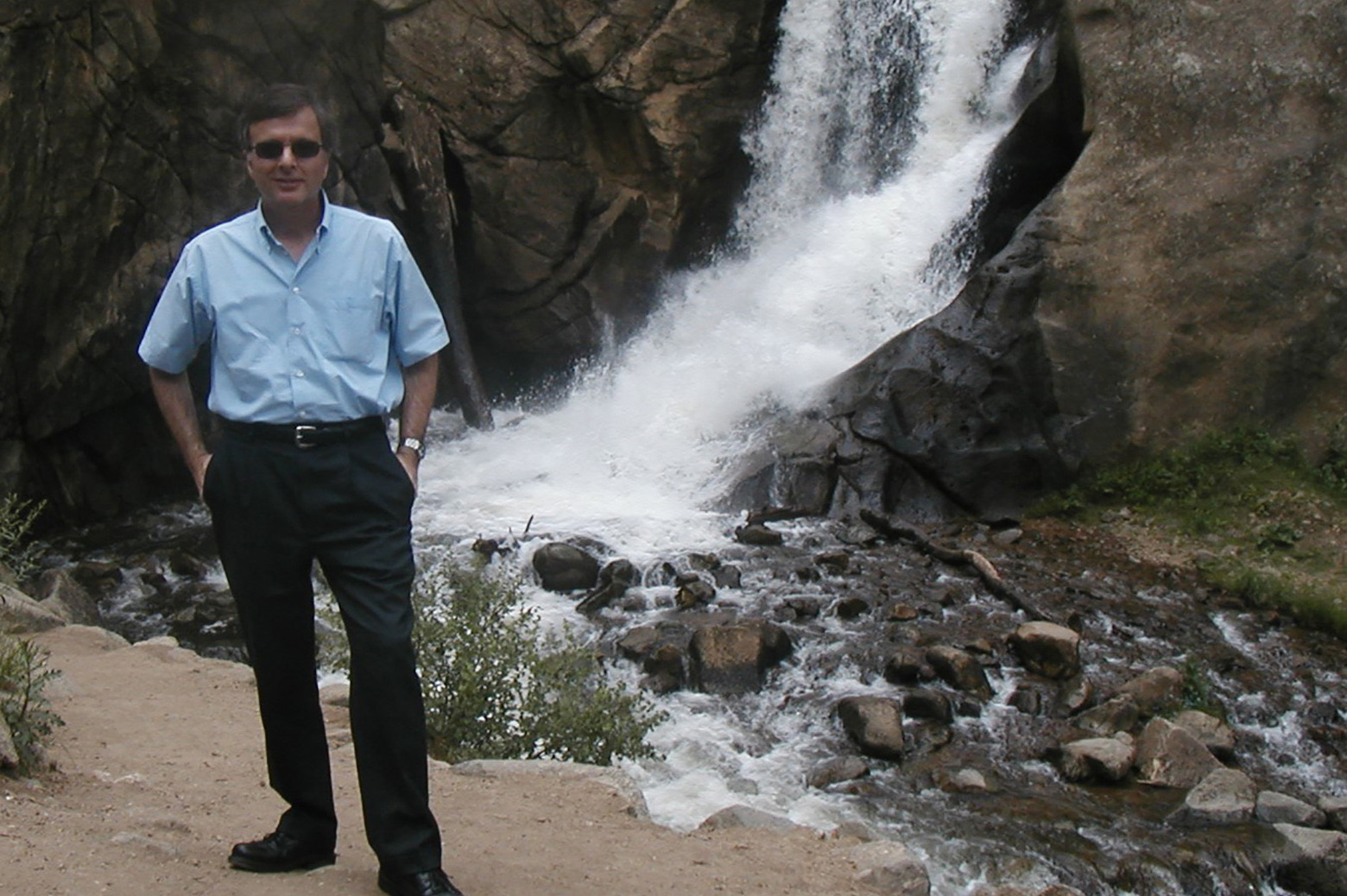 His legacy is one of an exemplary scholar and teacher. Writing on the ways in which Katopodes has inspired him, Louisiana State University Professor Scott Hagen reflects: “I first met him in 1993 when I was a graduate student and had the good fortune to attend the 3rd International Conference on Estuarine & Coastal Modeling. It was clear to me then that he would serve as a model for my own career. Why? Not simply because his work is and was exemplary, but because of the way that he went about it. He made me feel as though I was the most important scientist/engineer in the room… I know of very few faculty who have placed as many of their PhD students in faculty positions…  Nik will tell you that he is just fortunate to have had those students cross his path, but that is simply his humility.  Professor Katopodes attracts young talent because he is the definition of a gentleman and scholar… I feel blessed to have made Nik’s acquaintance and earned his friendship and respect.”