Most of the United States remains in lockdown as government and health authorities struggle to contain the COVID-19 pandemic, but such a situation can only be sustained for a short time. With the prospect of the quarantine orders lifting soon, the population and especially aerospace students must now not only learn to cope with the present isolation, but also the unexpected stresses of going out into a world that has been fundamentally changed by world events.

To learn more about how to handle both of these problems, we recently spoke with retired NASA astronaut Colonel Douglas Wheelock, who clocked up over 178 days in space aboard the Space Shuttle and the International Space Station, and now helps to train future astronauts in how to cope with life in orbit. According to him, the time to get ready for getting out of home isolation is right now.

According to Colonel Wheelock, what is harmful about forced isolation and what makes it so hard to cope with is the fear it induces. Such fear can affect a person’s very definition of themselves and can lead to paralysis, where it isn’t possible to carry out any useful action. This can be made even worse by the losses that the pandemic has produced – the loss of a job, money, a place to live, or even a loved one.

“Most of us obviously have never seen something like this where we have to isolate,” said Wheelock. “We start training our astronauts from day one on how to recognize basic emotions and the signs of fear – what happens to their mind and their body and ways that they can manage the fear to the point of coming out the other end, having grown through the experience, and learn more about themselves and about their environment.”

Wheelock’s number one piece of advice is not to panic. He compares coping with such loss and fear to putting together a jigsaw puzzle.

“It’s the way we survive when the alarms go off on the space station,” said Wheelock. “It’s like somebody just dumped a box of puzzle pieces in front of you and then took the box away. You don’t know what the end result is…The only thing that you need to know is you’ve got to get these pieces put together.

“The first thing you do is you turn all the puzzle pieces over to the side that has the picture on it, and then you start from the four corners. That’s the whole concept of you or your sense of purpose. The other corners are your family, friends, our work, our job, or our greater purpose. Once we get those pillars in place, then we can start building the connective tissue.

“If we tried to put the puzzle together without having those foundations first, it would be impossible to put together a puzzle. You don’t have the picture until you start with the corners and the edges.” 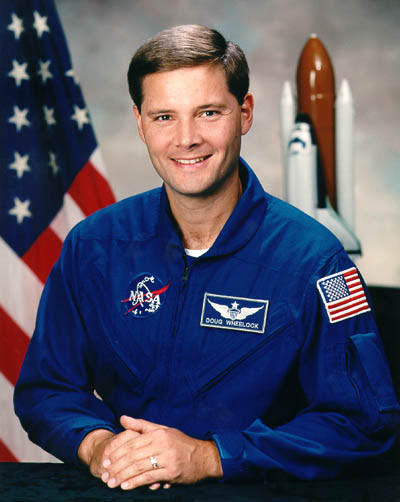 Wheelock also looks past simply surviving isolation to how to rebuild the past lives that we have lost – especially in terms of community and normalcy.

“One of the most important things is that we have to admit that the world has changed and isn’t going back to the way it was,” He says. “We have to be ready for that when we come out.

“One thing that we’re certain now is life as we knew it will never be the same. I’ll be a different person now. Some of those changes are for the good. I’ll be a little kinder. I’ll be a little more compassionate to the people that are in more difficult circumstances, I’ll be quite a bit more grateful for the things that I did that I once took for granted.

“All of a sudden you turned survival into a period of personal growth. You can not only survive, you can thrive in isolation. And this is precisely what we teach our astronauts.

The big takeaway is that we have to be as prepared for the end of self-isolation as for isolation. Even if the “new normal” turns out to be very similar to the old normal in many respects, we have to recognize that the passing weeks and months have had their effect on us and those around us. This has to be adjusted to, like coming home after the first year at college only to learn that your childhood bedroom is now very small. With proper preparation, this can be an opportunity rather than an obstacle.