IMAGE:  Jonathan Fay of Center for Entrepreneurship engages students during a workshop for the competition.

Prize competitions accelerate progress toward ambitious goals by providing an incentive for innovators and investors to solve complex problems. Prizes particularly lend themselves to situations where there is no clear route to a solution, or there may be many different pathways for innovation.

So when Mackenzie Warwick, an undergraduate senior in Nuclear Engineering and Radiological Sciences (NERS), along with one of the department’s secretaries, Jennifer Melms, proposed the idea of a prize competition during the summer of 2019 to the department chair, Professor Todd Allen, he liked the idea and thought perhaps the subject could be aimed at fixing the perception of nuclear waste. This led him to reach out to Bret Kugelmass with the Energy Impact Center in Washington D.C.

In late September, Bret Kugelmass visited U-M and spoke to students during an ENTR 407 E-Hour lecture. He launched the challenge, and a series of workshops kicked off with opportunities for any U-M student to form a team, speak with mentors and experts, and come up with a pitch for a technical business plan proposal to productize nuclear waste and incentivize the creation of new markets/uses that re-imagine how spent nuclear fuel can be utilized.

“Nuclear energy is not, and never was, a threat to public health,” said Bret, “but telling the public this directly does not satisfy their valid feelings on the topic.”

Nuclear energy is not, and never was, a threat to public health.Bret Kugelmass, Energy Impact Center
Tweet

Working with the Energy Impact Center, NERS, and U-M’s Energy Institute, the U-M Center for Entrepreneurship joined the challenge and helped with coordinating the workshops. Teams were formed with members hailing from various schools and colleges on campus, as well as both undergraduate and graduate levels. The reasons members joined and what they had hoped to gain from the experience was just as varied.

Manisha Vupputuri, a senior in CSE, said she heard about the challenge when Bret spoke to the ENTR 412 Discussion class. “I was hoping to spend time with my brother (Preetam) in my last year at U-M and gain experience in a competition about a topic I knew nothing about (the world of nuclear engineering and nuclear waste),” said Manisha.

Nuclear Engineering Masters student, Jacob Ladd, said he’d heard about it from a classmate in an Energy Technology and Policy Seminar. “I was approached by some classmates in the School for Environment and Sustainability about the nuclear prize competition,” Jacob said. They also sought team members from complementary disciplines such as Public Policy and Design Science.

Jacob also expressed his interest in exploring entrepreneurship. “Through the competition, I have learned about things like stakeholder engagement and customer validation, so it has been extremely educational and beneficial.”

In addition to students, the challenge also called upon professionals from the nuclear, policy, and education sectors (to name a few) to engage with teams and provide feedback and guidance.

One of the mentors for the challenge is Roy Payne, Executive Director at GDFWatch an international NGO.

“Innovative approaches to public dialogue are required, which is one of the key objectives of the competition,” said Roy. ”We hope the competition sparks innovative thinking in how the nuclear waste sector communicates and engages with the public. GDFWatch wants to help build a network of like-minded innovators, and support specific projects to achieve their ambitions.”

Through the competition, I have learned about things like stakeholder engagement and customer validation, so it has been extremely educational and beneficial.Jacob Ladd, NERS Masters Student
Tweet

Other mentors like Senior Policy Analyst, Katie Tubb, advocate for opportunities afforded to students on this very topic.

“Nuclear waste management can be an innovative, dynamic part of the fuel cycle—as the student ideas have helped demonstrate,” said Katie.

Speaking to her expertise in law and policy, she added, “The competition has been a great opportunity to see that there are ideas out there for getting more out of nuclear waste—now it’s time for Congress to make policy changes that allow space for innovation.”

Outside of the potential benefits to the environment, participants like Nuclear Engineering Undergraduate, Jason Cottrell, have embraced the other entrepreneurial aspects, such as an opportunity to look at the broader scope of a design project.

“It has us looking at who would want it, how it holds up to alternatives, what the production process would look like, etc,” Jason said. “The goal of this competition isn’t to just design a device, it’s to consider all the implications, from legal/regulatory issues to how you can convince an investor that your project is worth their interest.”

He also hopes that this provides a tangible example of his abilities as an engineer to show future employers.

The goal of this competition isn’t to just design a device, it’s to consider all the implications, from legal/regulatory issues to how you can convince an investor that your project is worth their interest.Jason Cottrell, NERS Undergraduate
Tweet

“For at least my brother and I, as we live in the same house, instead of on Central and North Campus, this allowed us to work on it together more easily (especially with the quarantining and social distancing leaving us nowhere to go…) and made more people willing to talk to us as they’re working from home and aren’t as busy,” said Manisha.

Jason Cottrell’s team didn’t have the same experience with mentors and interviewees. “Some of our plans for contacting professionals and power plant workers have fallen through due to the virus,” he said.

Jacob Ladd and his team were already used to working remotely due to his staying home more this fall to help look after his newborn son.

“Our team came together even stronger after the COVID-19 pandemic began,” he said. “I think it also helped us individually solidify our motivations for participating in the project—if we weren’t committed, we could have easily dropped out, as so many other teams did, but instead we unified behind our vision of creating a sustainable future.”

The winners of the $17,000 will be announced this Friday, April 17th. Check back to see the idea chosen by the panel of judges and find out more about all the teams’ nuclear waste solutions.

This fund will provide support to undergraduate students enrolled full-time in the College who participate in entrepreneurship programs through the Center for Entrepreneurship (CFE). | Short Read

The final teams fight for their chance to win the grand prize of $15,000.| Short Read 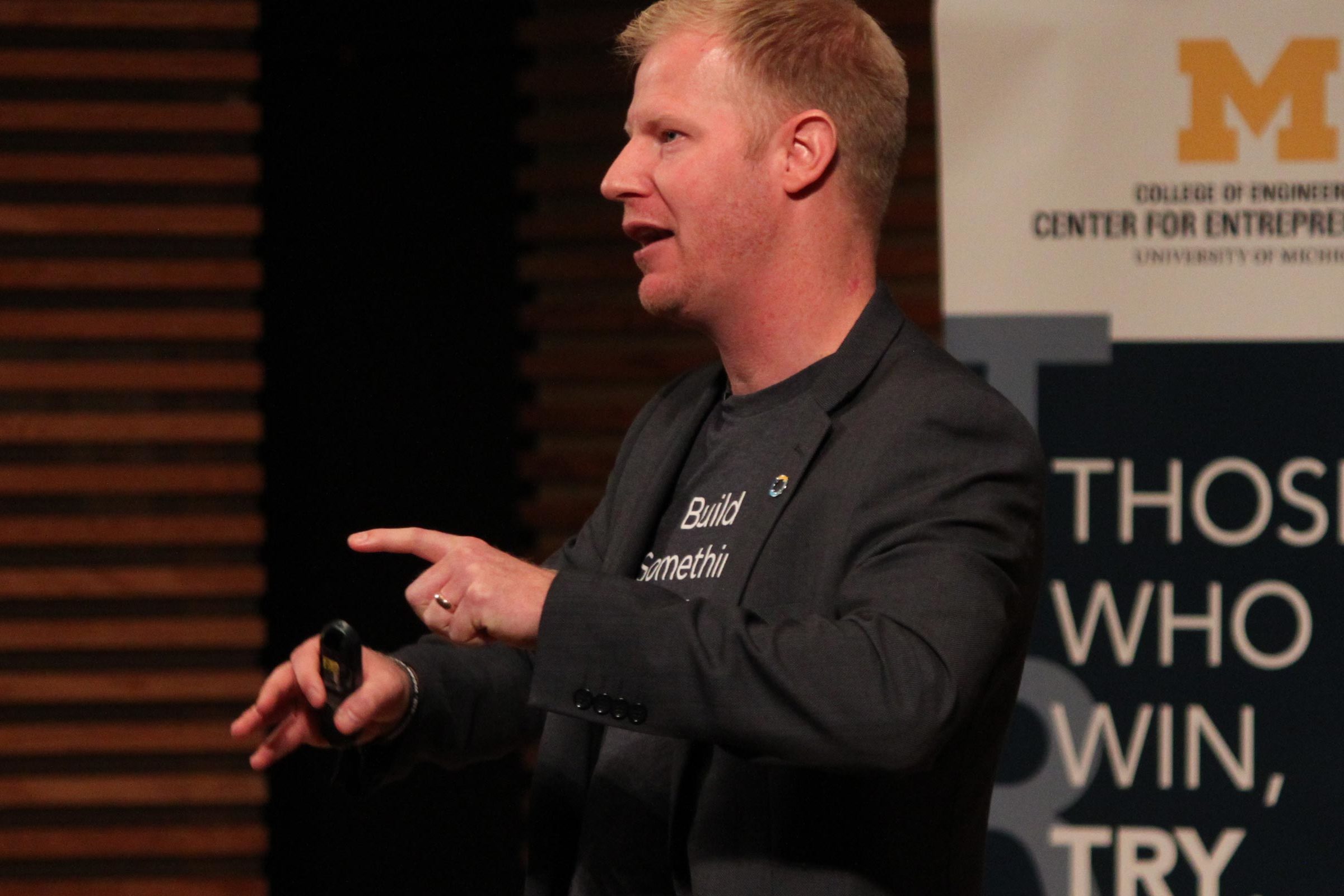 Alumnus Phil Brabbs speaks with students about risks, failures, and successes from his career as a University of Michigan student, football player, and entrepreneur.| Medium Read