Airships and hovercraft: How Aerospace Michigan uses ‘Skunkworks’ practical engineering to inspire and teach the next generation 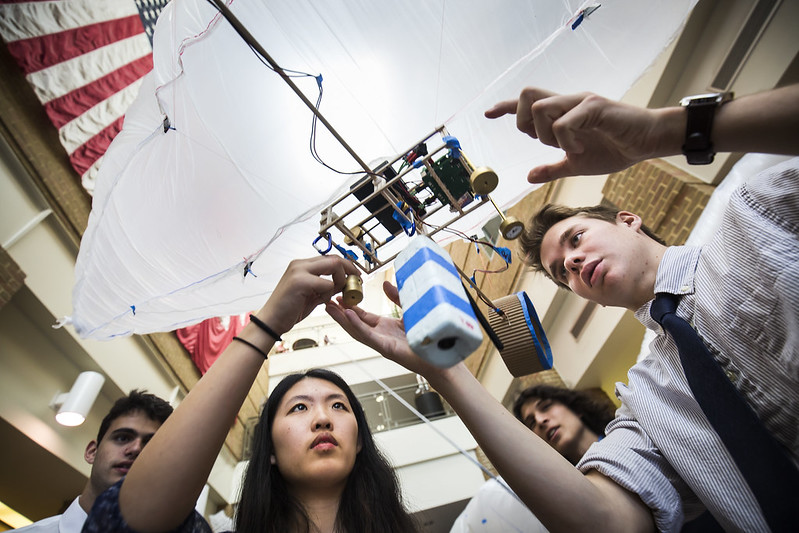 Airships and hovercrafts built by University of Michigan Aerospace undergraduates may look a bit crude, but they hide some cunning engineering. The little machines and the young minds behind them are the product of the “Skunkworks” thinking that UM uses to train budding engineers and are the focus of two very popular classes taught by Associate Professor Dr. Peter D. Washabaugh, who has been with UM since 1989.

The freshman-level Introduction to Aerospace Engineering course ENGR 100 and its sophomore-level companion course AEROSP 205 are courses where students learn the practicalities of engineering by building actual vehicles in a setting that owes more to Lockheed Martin’s famous Skunkworks than the traditional classroom. 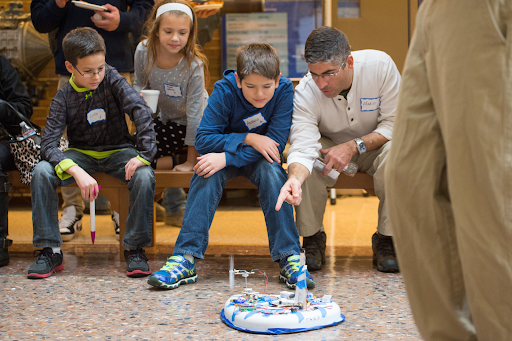 In fact, the two courses were partly inspired by the Skunkworks, less well-known by its more prosaic formal name of Advanced Development Programs (ADP). However, the UM students aren’t building super-advanced aircraft in an air of top secrecy. Instead, the freshmen learn how to apply engineering principles by building first a balloon and then an airship, while the sophomores build a simple air puck that supports itself on its own frictionless cushion of air and then a more sophisticated hovercraft.

According to Washabaugh, when he started teaching he was told by top-level Boeing engineers John McMasters and Ron Benjamin that he didn’t “get it” when it came to training new engineers though Washabaugh says he thought he did at the time.

This is where the Skunkworks came in. In the 1990s, former Skunkworks director and designer of the F-117A Nighthawk stealth fighter, Ben Rich, was giving a talk to one of UM’s honor societies. Washabaugh was his faculty host and in the front row he cringed as Rich gave a very politically incorrect talk using what would today be regarded as highly inappropriate phrases. Washabaugh says that he wanted to crawl under a table until the truth dawned on him.

Though Rich was very old-fashioned socially, half a century of aerospace work had given him a keen insight into the engineering. Listening to him, Washabaugh realized that he didn’t “get it” and that if he was going to teach young engineers, he had to replicate Rich’s thinking and how the Skunkworks approached problems.

According to Wasahbaugh, the problem was that professors were taking too narrow a view of the subject. Education wasn’t encompassing the whole field of engineering but was concentrating on only a tiny bit of it.

“We were teaching people how to solve small, little problems and did paper-type studies to glue it together,” says Washabaugh. 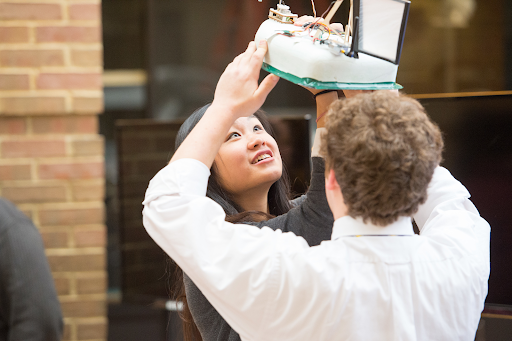 IMAGE:  An AE 205 makes last minute modifications to the hovercraft

Washabaugh compares the approach taken in the UM freshman and sophomore classes as being like planning a space mission. Such planning involves a lot of systems with a lot of unknowns and at various levels of development. Some of these systems might be very advanced and well understood, while others are still relatively crude and not much is known about how they perform. Worse, all these systems have to work together, which adds another level of complexity.

To deal with this, engineers at the start of a project need to calculate large margins of error for the systems involved. As the plan progresses, the engineers gain a better understanding of the systems and the margins can get smaller and smaller. It isn’t possible to deal with just one aspect of the mission. Everything needs to be considered as you move from initial estimates to completion.

Traditional courses were too specific in their teaching, but Washabaugh wanted a course where all the practical matters were considered as students designed, built, and tested their vehicles. It’s not a new idea. According to Washabaugh, it’s been around for a century, but he says that it “lives for a while in education, and then it dies.”

Equally important, Washabaugh wanted to allow students to work on complete engineering projects early in their career so they would not only help them to better understand the challenges they will face in their careers, but also a chance to make mistakes in a setting where lives and property weren’t in the balance.

He also wanted to teach what it is to be an engineer – a balance between a scientist, fabricator, and one who meets society’s needs. Or as he put it in what he admits is an unpopular joke, “Solving society’s problems without being a member of society.”

Washabaugh says that putting together such a class wasn’t easy. Aside from selling the idea to the university administration, it required hundreds of people, including help from experts at Boeing and Lockheed Martin, innumerable student volunteers, alumni providing feedback, and many others. Of special note is Professor of Technical Communication Leslie Olsen, who has worked for 20 years with Washabaugh to develop the hands-on program. 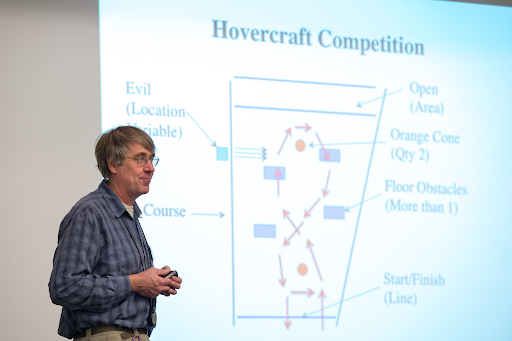 The first course to be offered was the freshman airship elective. In this, the students not only designed, built, and tested balloons and airships, but were also given instruction in writing, presentation, argumentation. This was so successful that Washabaugh was approached to offer it to sophomores, but he pointed out that it had already proven itself to be a freshman class, so he used the same course template to create the hovercraft class.

Now a required course for sophomores, Aero 205 not only challenges students with the more complex task of creating an air puck and a hovercraft, but also exposes them to more sophisticated tools like computers aided design, laser cutters, fiberglass fabrication, and CNC fabrication. Students  learn how to deal with problems like fluid mechanics and load-carrying feedback control, and how to program microcontrollers and run computer simulations.

Despite what sounds like a lot of hard work, a quarter of the people who took the course said it was their favorite class.

As to what future students will face in Washabaugh’s class, he says that it is constantly improving as more and will never be done.

“It’s a black hole,” he says. You can just keep adding material.

Seeing is believing. Click here to watch a 2016 event that shows you what Aerospace Day is all about. 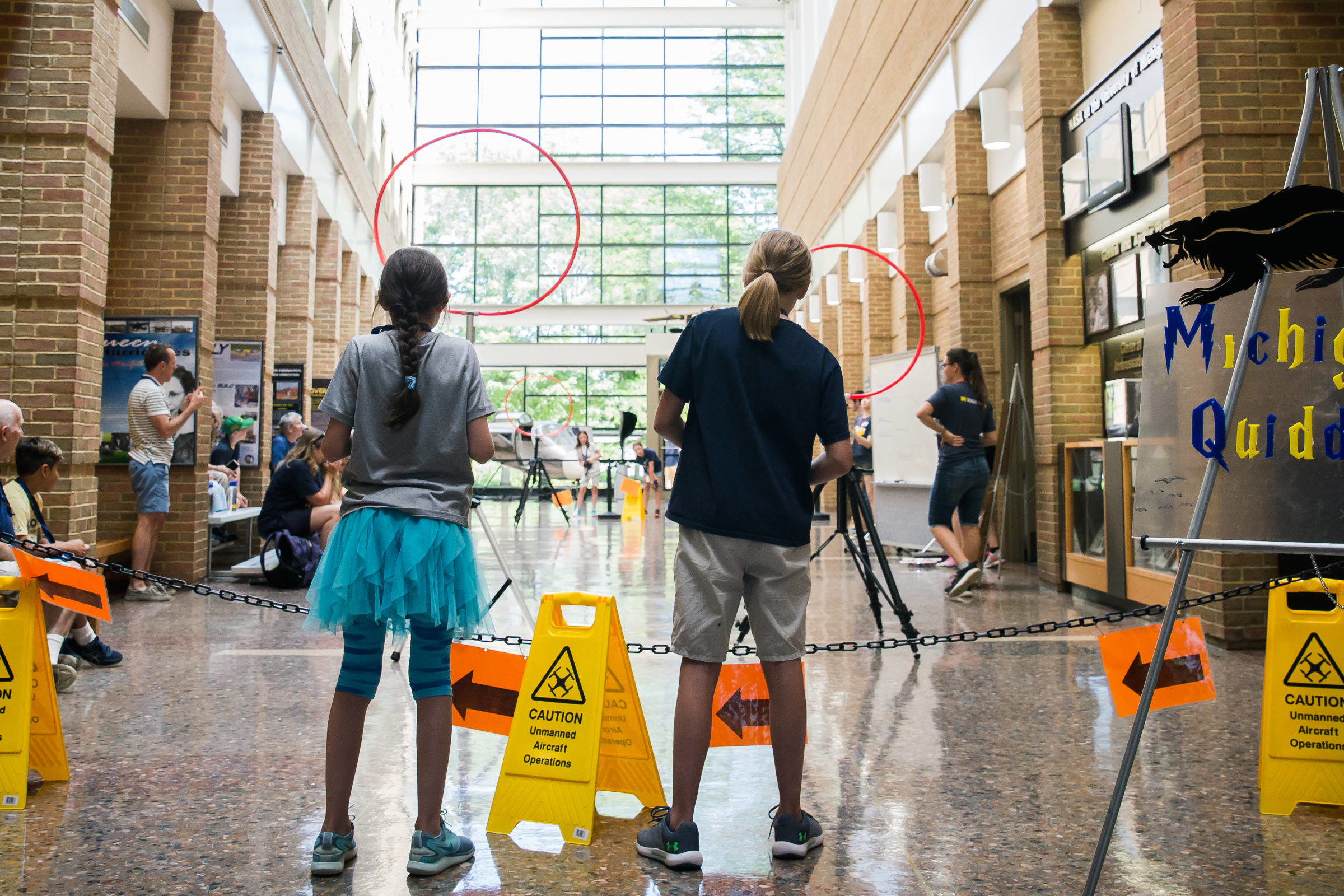