Just before the COVID-19 pandemic hit, ECE Expeditions completed its first trip to New York City, New York. Staying in the heart of Times Square, students were able to tour IBM, Duality, Richards Manufacturing, MEMX, and Elenion Technologies while also getting time to explore and enjoy the city that never sleeps.

“The ECE Expedition overall was very, very fun and very interesting,” said Hassan Fawaz, an Electrical Engineering undergrad attendee.“I thought it was just going to be another networking opportunity, but it was a lot more than that. We got to talk to alumni who went through the same struggles as us, and they gave us detailed tips on how to deal with school. And the technical demos really showed us how relevant everything that we’re learning in class is.”

ECE Expeditions gives students behind-the-scenes access to a variety of companies and fields. Students learn about the role of electrical and computer engineers in industry, get to network with high-ranking U-M alums, and explore the different business and company atmospheres. Students also get to network with other current ECE students who are in different degree programs or research areas. 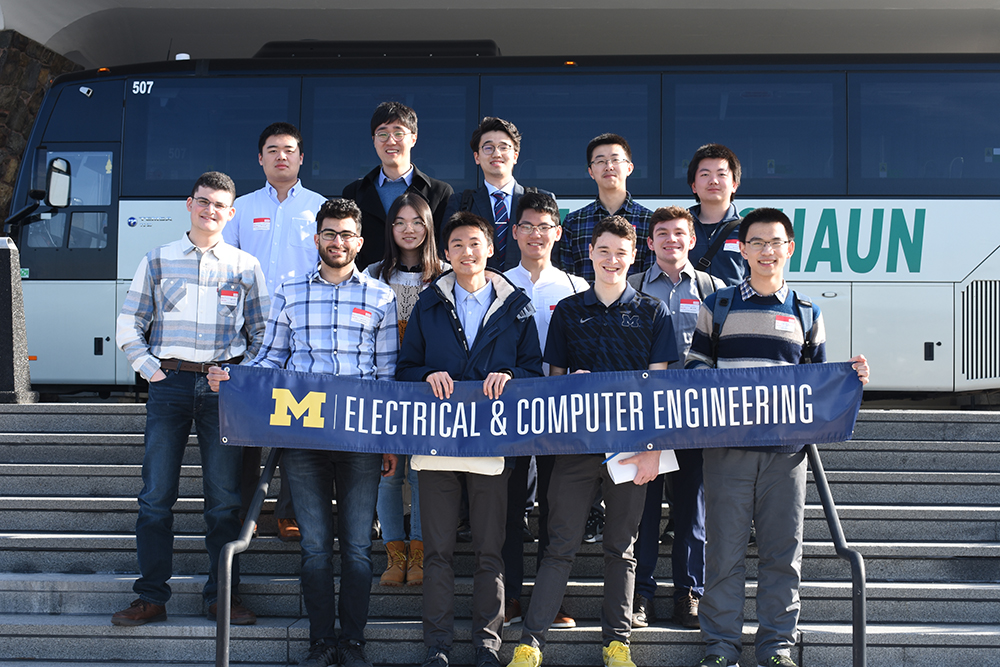 Students spent the first full day at IBMheadquarters in Armonk, NY. They received information about internships and other opportunities for undergraduate and graduate students at IBM. They then got to spend nearly an hour with the Honorable Zachary J. Lemnios, who earned his B.S. in Electrical Engineering from U-M and currently leads the Physical Sciences and Government Programs globally across IBM Research. His role is to extend fundamental scientific understanding and breakthroughs that enable the future of information technology with strategic initiatives including quantum computing, neuromorphic devices and architectures, molecular imaging, silicon nanophotonics, and magnetic memory technology. 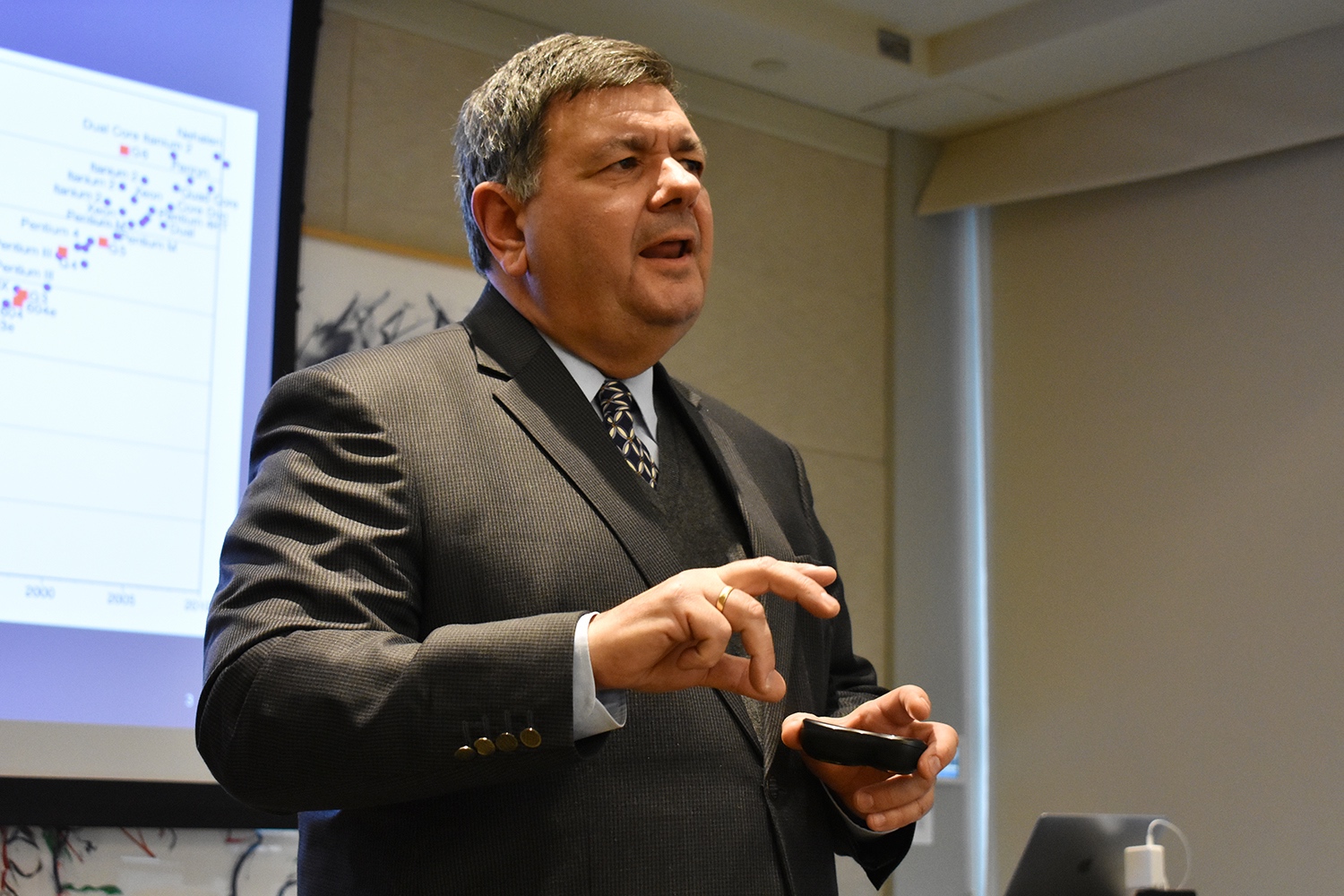 Lemnios detailed his personal career path, including his time serving as the Chief Technology Officer for Department of Defense during President Obama’s administration. He talked about the current and future research goals of IBM, as well as the company climate and culture. He also provided advice to students about important skills to curate (data science and data curation; physical sciences; machine learning and coding).

“For those who are undergrads,” Lemnios said, “try to find some time with your grad student friends and people in other departments. You’re at a remarkable institution. You have world class facilities and professors, so take advantage of it. And don’t miss a Michigan-Ohio State game.”

After Lemnios, IBM presented a panel of engineers, all U-M alums, who gave a wide range of advice from being competitive in the job market to overcoming challenges or failure in academia to favorite alumni clubs and programs.

“My favorite part of the IBM visit was actually the panel, because those panelists were speaking not just as IBM employees, but as Michigan alumni who shared their life stories and their experience,” said Minzhi Chen, ECE Master’s student attendee. “I got to speak to one after, and he was very warm and reassuring and gave me really good advice.”

At the end of the day, students got to tour the ThinkLab, which showed demos on how IBM is working to improve AI so that it can recognize empathy and understand and interpret human facial and vocal expressions. 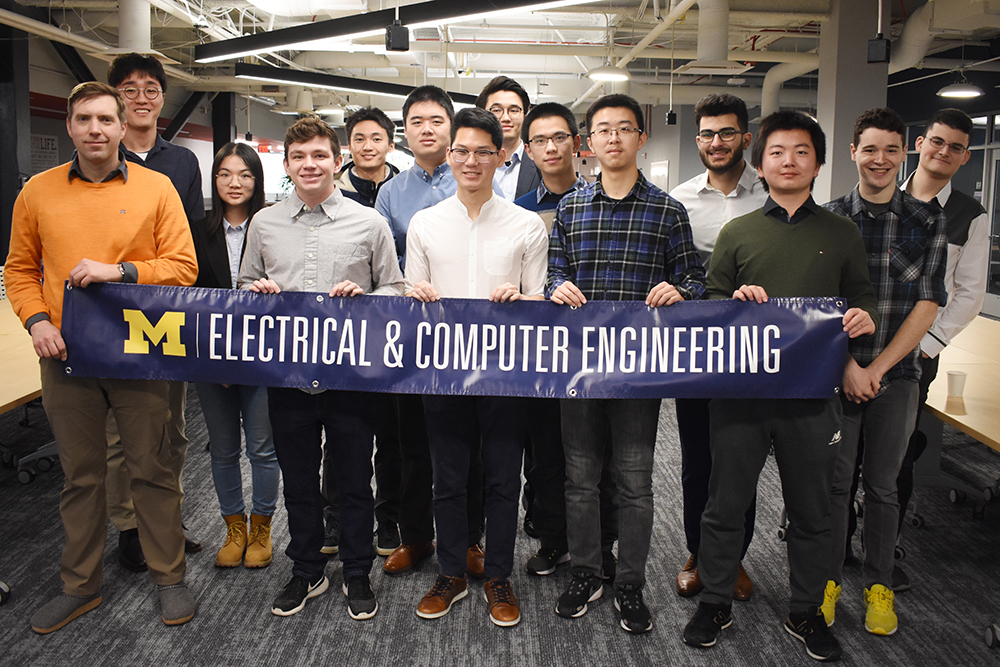 IMAGE:  Kurt Rohloff (far left) and students during the visit to Duality.

Duality is a data security company that addresses the need of enterprises to collaborate on sensitive data. Their award-winning platform, known as SecurePlus™, uses a type of homomorphic encryption, which enables secure analysis and AI on encrypted data.

Rohloff spent the entire visit with the students. He provided a detailed technical talk about the work of his company and the experience of founding and working at a startup. He emphasized the importance of community culture and team diversity. He then took students on a tour of the building and workspaces and answered questions about his time at Michigan, his career path including his experience working at BBN Technologies, and his current work.

“I think my favorite part of the visit was the fact that I got to speak with someone who was a founder of a startup,” said Jonathan Wong, an Electrical Engineering undergrad attendee. “That’s a very different kind of culture and work life that you don’t really get to hear about too much, because a lot of people go in big companies. Hearing his perspective about what it’s like was very cool.” 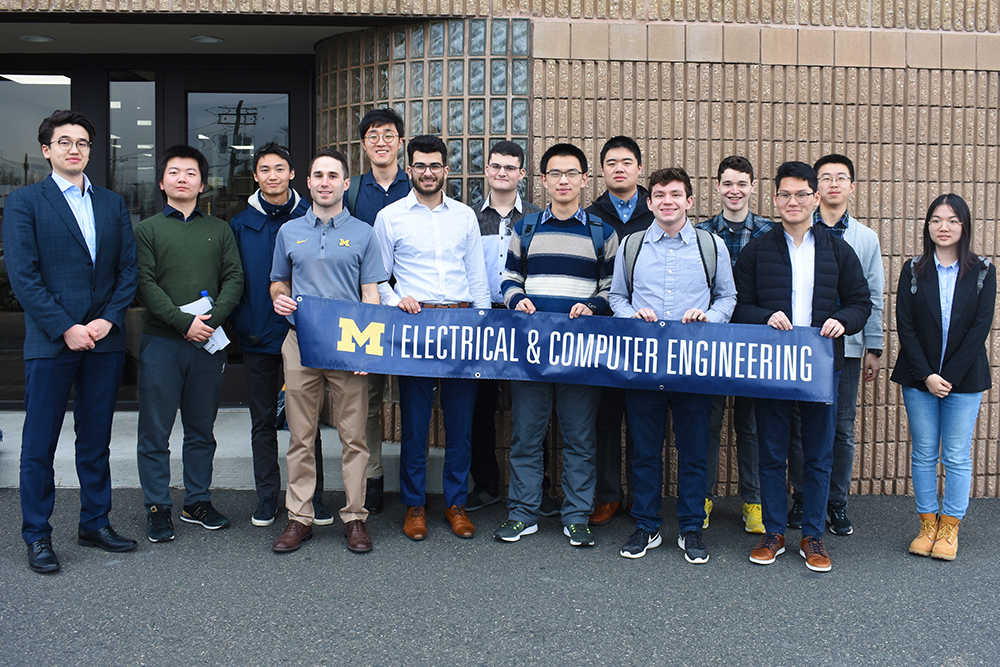 Richards Manufacturing Company, located in Irvington, NJ, is a family owned and operated business that has supplied utilities with product for over 70 years. They specialize in connectors, network protectors (of which they are the largest supplier in the world), medium voltage, and natural gas.

The Vice President of Richards Manufacturing is Zachary Bier, who earned his B.S.E. in Electrical Engineering from U-M. Bier kicked off the visit with a presentation on the history and work of the company. Bier also answered questions about his time at Michigan and recommended students focus on internships for professional development. 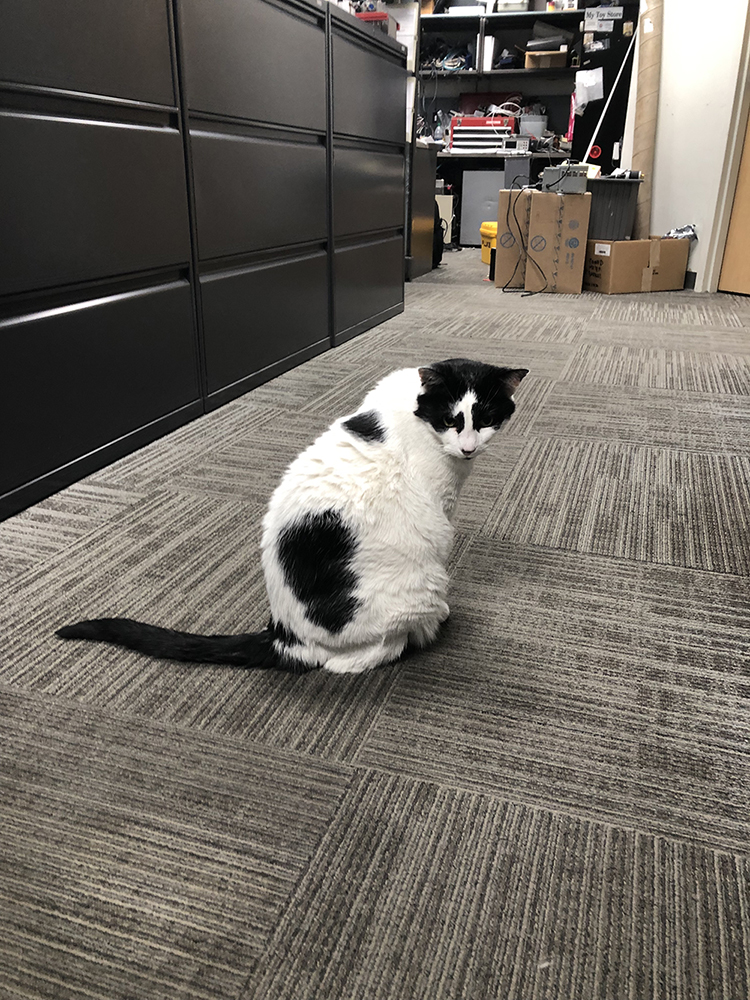 After the presentations, students received an in-depth tour of the labs, factory, and offices at both Richards Manufacturing and their sister company, Electronic Technology, Inc. The tours included a detailed look at the entire process of designing and building the products. Students also got to pat the company cats who are stationed in the main offices.

“My favorite part was definitely the factory tour, because it was an opportunity to actually see the manufacturing lines for the electric components,” said Hee Woo Kim, ECE PhD attendee. “I really liked their explanations regarding their processes.”

The visit concluded with a panel of electrical engineers who work for Richards Manufacturing. The engineers spoke about their day-to-day routines and the benefits of working at a smaller company. 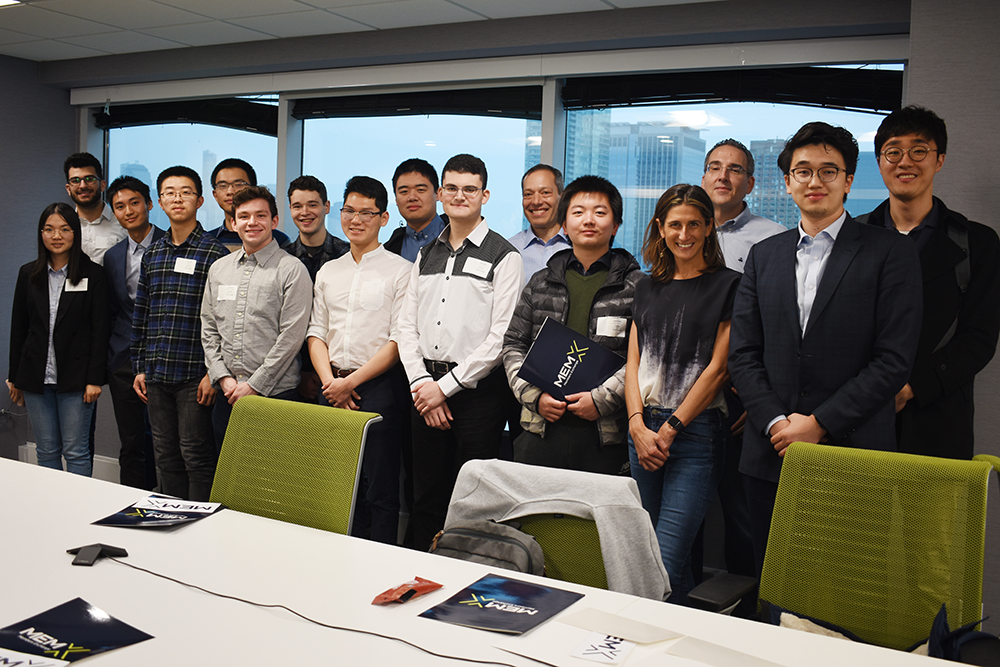 IMAGE:  Group photo in conference room at MEMX, including President Jonathan Kellner (6th from the right), and other members of MEMX.

The second day concluded with a visit to Members Exchange (MEMX), a growing FinTech firm founded by a group of leaders in the world’s financial markets that is seeking to register as a new stock exchange. The visit to MEMX, located in Jersey City, New Jersey, began with a presentation by Jonathan Kellner, the Chief Executive Officer. Kellner is a U-M alum who earned his B.S. degree in Mechanical Engineering.

Kellner provided an overview of the company and advised students to take full advantage of the Michigan Alumni network. Then, several engineers from a variety of backgrounds gave short presentations about their specific roles and the problems they were tasked with solving. Some of the presenters focused on the technical aspects of their job, whereas others talked more generally about their experiences at different companies and the benefits of working at a startup.

“I think the coolest part was the description of what the company is,” said Daniel Manwiller, an Electrical Engineering undergrad attendee. “It seems like they’re making a huge impact in the industry. I’m very interested in algorithmic trading, things like that, which is very applicable to ECE type of things, whether it’s related to machine learning or a different algorithm design. And so it was interesting for me to learn more about the industry and see how these kind of systems are set up.”

The final visit was to Elenion Technologies located in the heart of midtown Manhattan, near the Empire State Building. Elenion designs and develops highly integrated System-on-Chip optical engines for Telecom, Data Center, and Networking applications.

Several members of the Elenion team – including Michael Hochberg, the Chief Technology Officer – began the meeting with presentations about their work and clients. They provided demos of their products and spoke about their experiences working in different sectors and geographical location. Several engineers used to work in Silicon Valley, and they answered students’ questions about the differing cultures and the benefits of working in the New York tech sector (significantly less time stuck in traffic, so you can do more during the day and you have a lot more personal time after hours).

Students then got to tour Elenion’s clean room facility, which was housed on a different floor in the same skyrise. The engineers working in the clean room explained what they were working on and demonstrated some of their testing procedures.

“It was cool, because that was one of the companies where I was, ‘Oh I’m learning this right now in my current classes,’” said Fawaz. 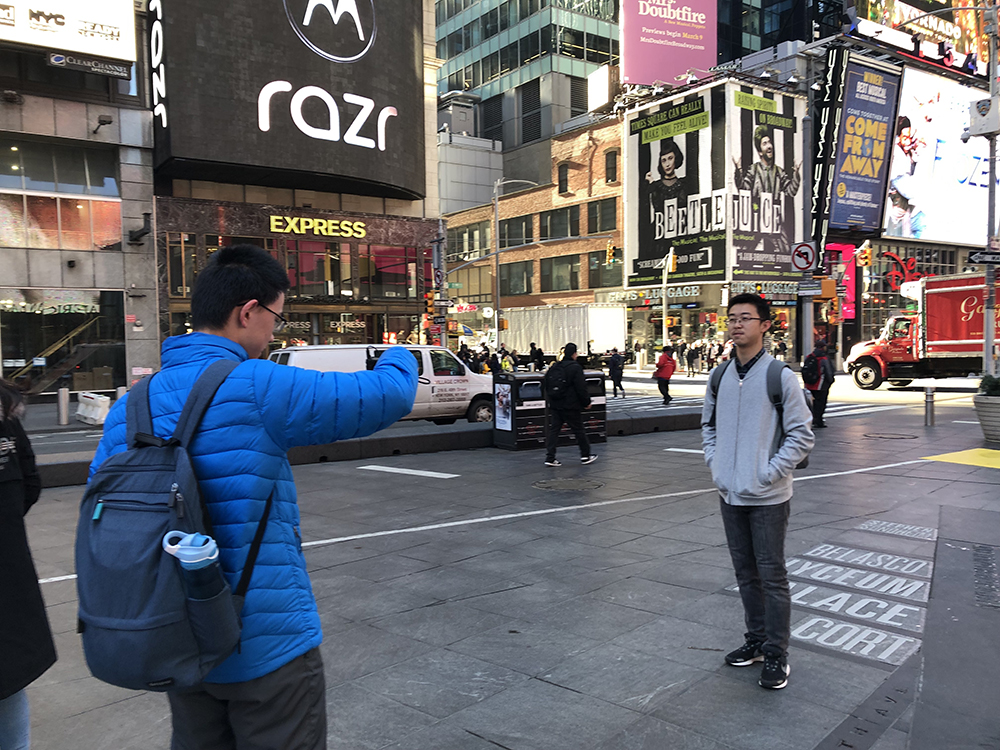 Students also got a chance to explore Times Square and Manhattan. Several students took a trip to the top of the Empire State Building, strolled through Central Park, visited friends, toured the New York Stock exchange, and went to a New York Rangers game in Madison Square Garden.

“I tried the real Joe’s pizza in New York,” Wong said.“I also watched a Broadway show, Aladdin, and I thought it was really amazing.”