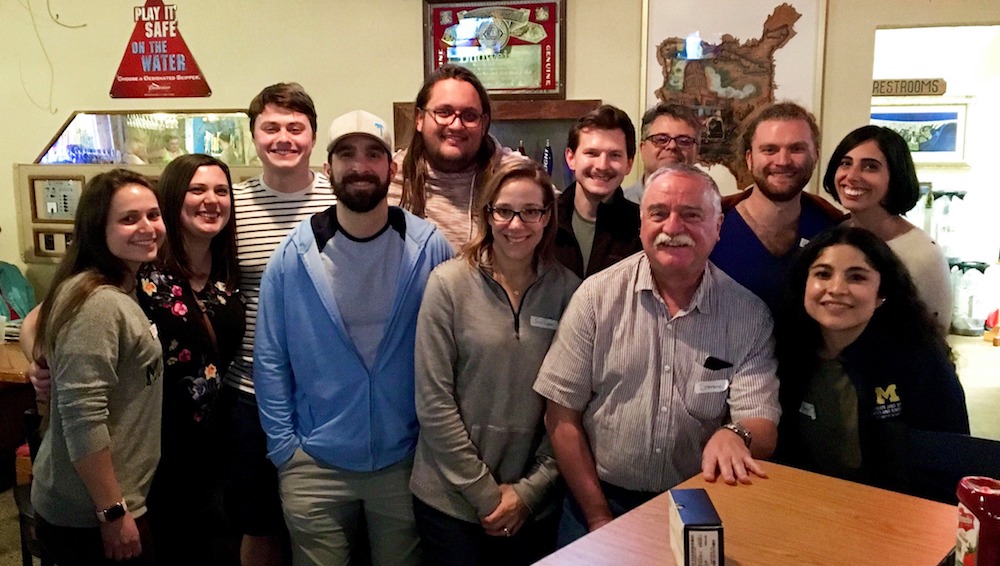 By 7:30 p.m. on February 9, 2020, night had fallen on the Atlantic shore of Central Florida – the Space Coast. It was a mild evening with a light breeze, and a full moon had risen in the eastern sky.

Parking Lot 4 of the Kennedy Space Center Visitor Complex quickly filled with cars. Small groups of people made their way past idling tour buses to the entry gates. French, Italian, Spanish were overheard. The European Space Agency (ESA) was well-represented. Once inside, the small army of invited guests received plastic Solar Orbiter Launch badges on lanyards and were directed to one of the waiting buses. As the last of the crowd was processed, the buses began to depart for various viewing locations deeper inside the storied space port.

If all went as planned, the Solar Orbiter spacecraft would be carried into the heavens to begin its journey to the Sun. The U-M Climate & Space department’s Solar Orbiter team had been waiting for this moment since the mission’s formal approval nearly thirteen years prior.

The National Aeronautics and Space Administration’s Kennedy Space Center sits on Merritt Island, a comma-shaped spit of land about an hour south of Daytona Beach. The western edge of the island is separated from the mainland by the Indian River. This is the home of the Kennedy Space Center Complex. The eastern side of the island is partially bisected by the Banana River, and the Cape Canaveral Air Force Station occupies this eastern slice of the island on the Atlantic shore. This is where the space launch complexes lie, safely out of range of the visitors.

Most of the island’s land mass is given over to the Merritt Island National Wildlife Refuge. When NASA established the John F. Kennedy Space Center in 1962, the agency acquired over 140,000 acres of land, water, and marshes adjacent to Cape Canaveral. The Refuge was established in 1963 by the U.S. Fish and Wildlife Service, and in 1975 a second agreement established Canaveral National Seashore. The island and surrounding area are the protected home for over 500 species of wildlife including 21 federal and state listed threatened and endangered species.

This was low country. Flat woods. Coastal hammocks. Swamp marsh. Seashore. The wildlife were definitely present. Alligators, small and not-so-small, lounged in nearly every body of water. Bright white egrets strode through the shallows. A small bobcat darted across the roadway for the cover of the dark green thicket. At night, the thick vegetation encroached on the minimally lit roadway like the forest primeval. The buildings at Kennedy exist in small groupings and far apart. It took time for the tour buses to carry the visitors through these dark and mysterious areas toward the bright lights and towers in the far distance. One has the distinct feeling that human dominance over this area is temporary, and the wildlife well-positioned to take control again someday soon.

9:00 p.m., and the buses approached the looming presence of the Vehicle Assembly Building, known locally as the VAB. Built in 1966 for the assembly of the Saturn V rocket which delivered the Apollo missions to the moon, the structure is an enormous beige cube. Emblazoned on its face are a huge American flag and an equally gigantic NASA logo. The painted flag is nearly an acre in size. The VAB is one of the largest buildings in the world by area. The building covers eight acres, and is 525 feet tall by 518 feet wide. The VAB high bay doors are the largest in the world at 456 feet high, and take about 45 minutes to completely open or close. It contains 65,000 cubic yards of concrete and the frame is constructed from 98,590 tons of steel. The VAB can be seen for miles and miles in any direction. To say it is iconic is an understatement.

The buses carrying the Solar Orbiter team pulled into the parking lot of the Operations Support Building II (OSB II) directly across from the VAB. Guests were escorted to the fourth floor of the building, and into to a large conference room and reception area. Outside of the conference room is an outdoor terrace facing the Cape Canaveral Space Launch Complexes several miles to the east. This is where visitors will view the launch of the rocket that will carry Solar Orbiter on the first leg of its journey to the Sun.

A pre-launch briefing commenced. NASA’s Associate Administrator for the Science Mission Directorate, Dr. Thomas Zurbuchen quoted Carl Sagan in his remarks. There was an overview of upcoming ESA missions. An explanation of the instrumentation flying on Solar Orbiter. A video of the spacecraft’s launch and post-launch deployment. An overview of the NASA Launch Services program, and an overview of the United Launch Alliance’s Atlas V 411 rocket, among others. By this time, the audience was restless.  Daniel Mueller, the ESA project scientist for Solar Orbiter noted that the tension in the room was “…as tight as a magnetic field.” The laughter helped a bit.

Finally, it was time. The audio speakers in the briefing room and on the terrace were switched over to a feed from mission control. The calm, unflappable voice of the Launch Director conducting the Launch Status Check (aka the “go/no-go poll”) added to the tension. “Talker.” “Go.” “Timer.” “Go.” “FSP.” “Go.” And on down the list.

The people assembled on the terrace looked eastward toward Space Launch Complex 41 (“Slick-41” in NASA parlance) nearly five miles away. The access tower and the Atlas V 411 rocket both gleamed white in the glaring spotlights, surrounded by the four pylons of the SLC’s Lightning Control System. Condensation plumes from the rocket’s supercooled fuel resembled steam wafting off the Delta’s fuselage. The rocket seemed as ready for liftoff as the crowd.

At 11:00 p.m., the Climate & Space Solar Orbiter team milled about on the terrace. Conversation was staccato. People chewed their lips and wrung their hands. The go/no-go poll continued. The tension was even more palpable than before. Everyone could feel it. More than one person said, “It’s really happening!” The go/no-go poll ceased, and the true countdown to launch began. It was quiet until the countdown hit ten seconds, then everyone joined in.

At 11:03 PM the countdown clock hit zero, and a brilliant incandescence flared under the rocket as it lifted from the launchpad. A deep rumbling came rushing through the ground toward the terrace. The light grew so bright that a very young member of the party remarked that “…it looks like the Sun!” And indeed, it did, illuminating the flat expanse of the Merritt Island coast as it rose higher and brighter. The faces of the Solar Orbiter team, lit by the fire of the rocket were filled with wonder, amazement, awe.

The rocket angled away and over the ocean, its thunder and light fading as it sped southeastward and down toward the point over Australia from which it would depart Earth’s gravitational field. The fading light eventually became a small glow, and then a tiny dot resembling a star as the spacecraft flew into the distance.

The crowd, still giddy, drifted indoors to watch a video simulation of Solar Orbiter in flight and to listen to mission control tick off various post-launch milestones. An hour after launch, control announced that they had achieved successful signal acquisition with the spacecraft. Solar Orbiter had deployed its solar panels. The crowd applauded. Staff appeared with trays of champagne flutes. A toast was given, champagne drunk. The tension abated – just a bit – for the mission principals.

The University of Michigan team had gathered in the back of the auditorium. Dr. Zurbuchen joined them. He said, “It used to be a ground-based project. Now it’s a mission.” Smiles all around at the words known, and intrinsically understood all along, but just now made very real. It’s a mission.

And already hundreds of miles away, Solar Orbiter flew onward through the night sky toward its mission at the Sun.