by Hayley Hanway
EECS: Electrical and Computer Engineering
January 23, 2020
Speaking to a full house in Rackham, Dr. Katie Bouman - Michigan ECE alum - explained the history and science of the project that gave us the first ever photo of a black hole. | Medium Read

Nine months ago, the first ever image of a black hole was released to the public, captivating the world. U-M alum, Dr. Katie Bouman (BSE EE 2011), was a key player in the project, and she spoke about the experience during her return to campus last week in an event hosted by Michigan Astronomy. 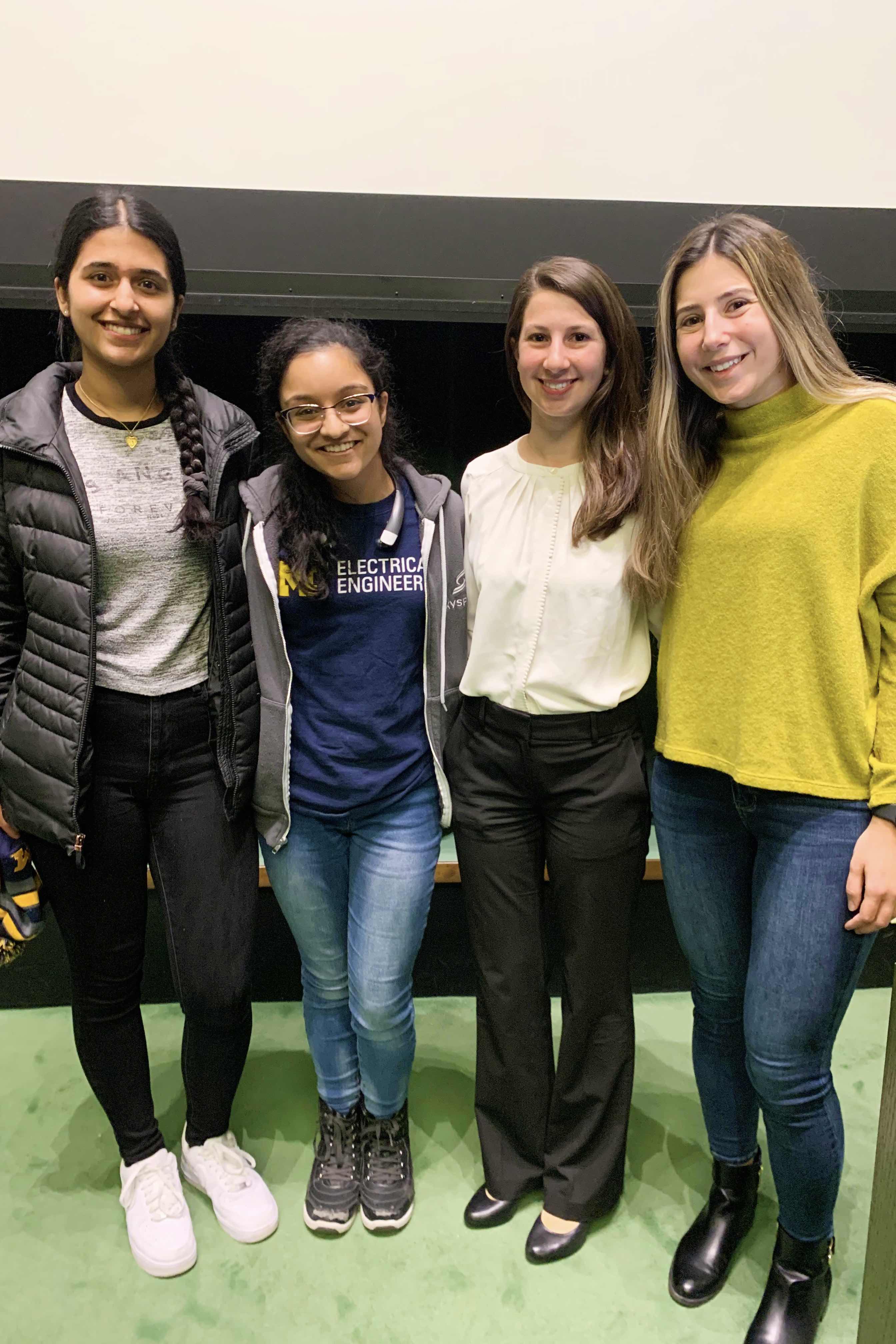 Presenting to a packed house in the 4thfloor Rackham Amphitheatre, Bouman began by explaining the methods used to photograph subjects that are invisible to the human eye, such as how we image the inside of one’s body using special sensors or how we observe space phenomena that is extraordinarily far away. Black holes are particularly challenging.

“Black holes are one of the most mysterious objects in the universe,” Bouman said.

Despite its name, a black hole isn’t a hole at all – it’s a pocket of space full of a massive amount of densely packed matter. Black holes take up a relatively little amount of space considering their ridiculous amount of mass, so they ultimately warp the very fabric of space-time. They are the universe’s ultimate quicksand, from which not even light can escape.

Einstein first predicted the presence of black holes as part of his theory of relativity, but even he had doubts that the confounding phenomenon actually existed. Over the next century, more pieces of evidence assembled: massive energy signatures that couldn’t be explained by stars alone, the cosmic sound of two black holes colliding, and finally the detection of gravitational waves.

But we had never seen one. In fact, obtaining an actual image of a black hole was believed to be impossible. Black holes are so far away that the only telescope capable of photographing them would be one the size of the earth.

Since building such a device is obviously not an option, an international team of over 200 scientists came up with an alternative: a network of radio telescopes. This conglomerate, known as the Event Horizon Telescope (EHT), features eight radio observatories that include bases on six mountains and four continents.

“Joining telescopes in this manner is called very-long-baseline interferometry or VLBI,” Bouman said. “We essentially record the light traveling from the black hole at each telescope, and then we bring it all together and use our computers to act like the lens to make the final picture.” 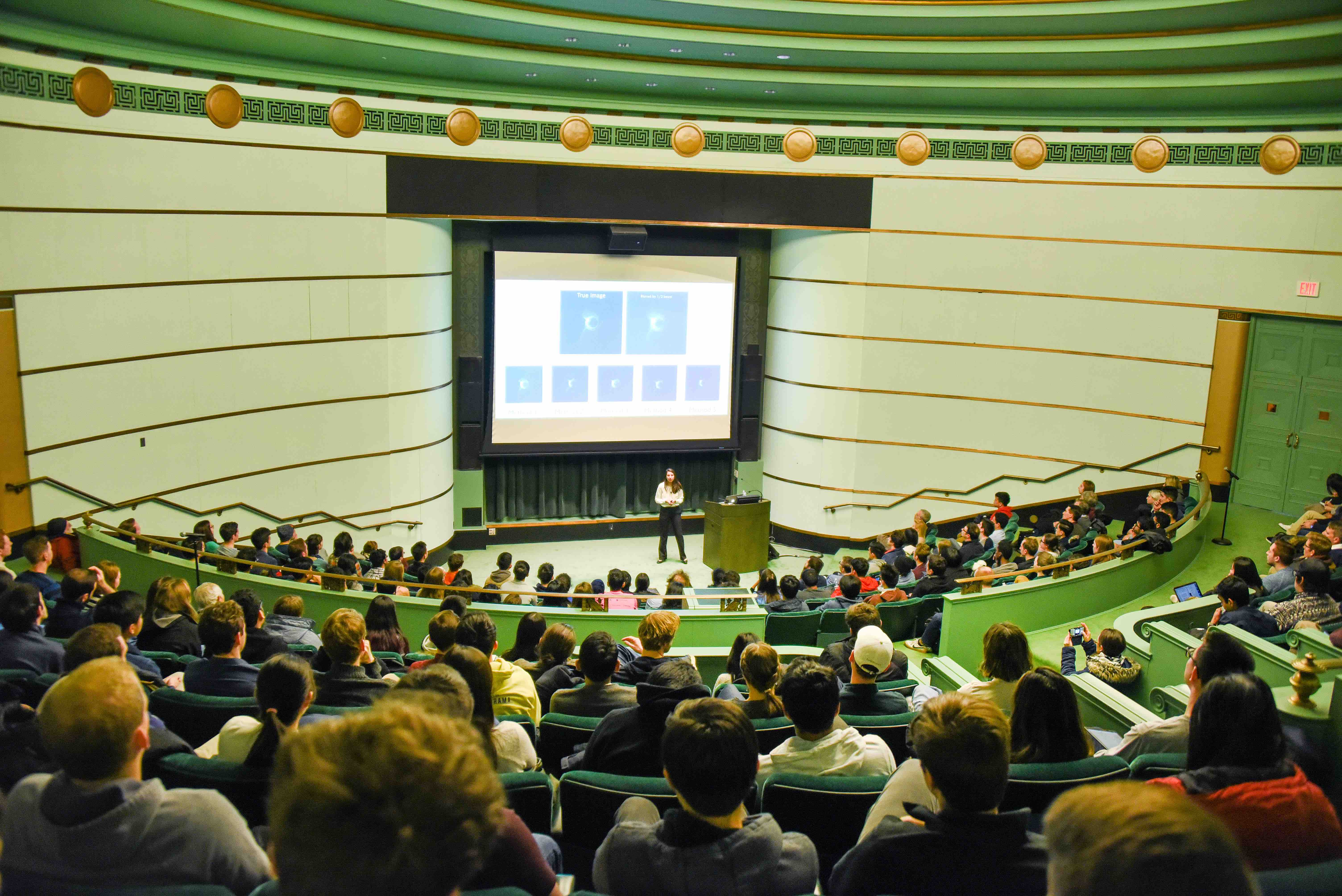 The target was a black hole located in the center of Messier 87 (M87), an elliptical galaxy some 55 million light-years from Earth. The team collected 5 petabytes of data, which are so much data that it would literally break the internet if you tried to send the data via e-mail. If the data were standard-sized films, it would be the equivalent size of 50,000 movies.

Due to the extraordinary volume, the data were captured on hard drives that had to be physically moved via planes, trains, and automobiles, to a common location for analysis.

“There, we used a special purpose super-computer called a ‘correlator’ to merge the massive about of data together,” Bouman explained. “The team of scientists then reduced the data down even further using newly developed algorithms, so by the time we started to make images, it was a file you could just email.”

The next step is to reconstruct the actual image, but this is easier said that done. Light from the black hole has to travel 55 million light years, and it will reach each telescope at a slightly different point in time. Atmosphere will also affect how the signal is distorted, and it will vary based on the location of each telescope. In addition, few measurements mean there is an infinite number of possible images that would fit the data.

Each phase of the process involved multiple steps and constant replication to ensure a verified result. Bouman helped with many parts of the project, including collecting data from the black hole at one of the telescopes in Mexico, but her main focus was in creating algorithms that would compensate for signal noise and distortion. The next step was the actual image reconstruction.

“The biggest challenge we faced with M87 was not just how to recover an image, but how do we make sure what we’re recovering is real?” Bouman said.

The biggest challenge we faced with M87 was not just how to recover an image, but how do we make sure what we're recovering is real?Dr. Katie Bouman
Tweet

Bouman led the team that developed the tests and techniques used to verify the black hole image. One of the ways they tested their reconstruction methods was by giving teams distorting synthetic data from known images and then comparing the reconstructed image to the original image. While some images were abstract and resembled space phenomena, the team also included unexpected images, such as Frosty the Snowman, to ensure against potential human bias.

When it came time to reconstruct the actual black hole image, the team wanted to safeguard against any potential for bias, so they split into four teams. Each team used a specific method of image reconstruction (there are different approaches) and worked entirely in isolation. No team was given any information about the results of the other teams. This process took seven weeks.

“After seven weeks, we all gathered together in Cambridge, Massachusetts, and revealed our images to each other,” Bouman said.

Although each image looked slightly different, they all contained the same key features: a ring of the same size that was brighter on the bottom than the top. 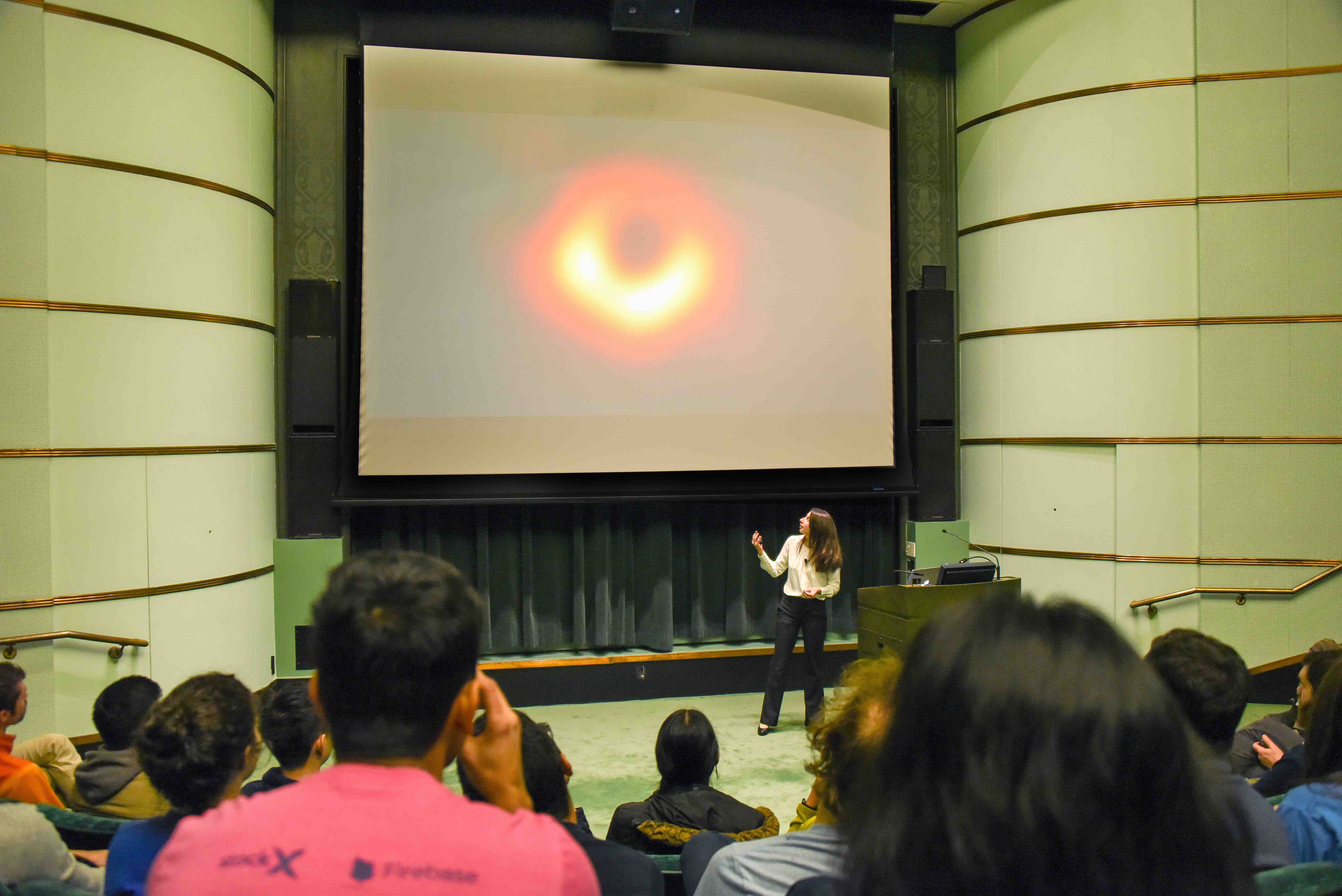 IMAGE:  Dr. Bouman shows the first-ever image of a black hole that was related by the National Science Foundation in 2019. Photo: Silvia Dykstra, Michigan ECE.

“It was one of the happiest moments,” Bouman said. “Seeing the same basic structure result from each team and method made me really confident in the results that we were getting.”

The team further tested their methods by trying to break the image. They attempted to force a different picture – a solid disc of light instead of a ring, for example – but in every instance, the data would not allow there to be any structure but a ring.

The team also employed additional validation methods, and while there is some question about the wispy light appearing outside the ring, the ring itself was thoroughly verified.

The importance of the black hole image goes beyond just a cool image reconstruction project. The image itself sheds light on many mysteries about black holes and how they function. It is astonishingly similar to simulations that scientists have made for years predicting what emissions around a black hole would look like.

“By studying this image, we have the best evidence yet black holes exist, as well as a way to study and learn about the immediate environment around them,” Bouman said.

By studying this image, we have the best evidence yet black holes exist, as well as a way to study and learn about the immediate environment around them.Dr. Katie Bouman
Tweet

The EHT team is looking to improve their methods to capture better images and new targets. They are developing new machine learning approaches to solve for the optimal placement of new telescopes to expand the network and see even more.

“The one I’m most excited about is we could capture a video of the gas falling in towards the black hole Sagittarius A*, the black hole in the center of our own Milky way Galaxy,” Bouman said.

Students got a chance to mingle with Bouman during a reception held before the talk and ask her questions during a Q&A after the talk.

“She was amazing!” said Isha Bhatt, an undergrad studying electrical engineering. “We found her to be extremely kind, intelligent, and candid.”

Bouman reminisced about her time on campus, including her favorite class (EECS 216) and her involvement with the Michigan Research Community.

“It’s really fun being back here and have all these memories of my time here come back to me,” Bouman said.

Bouman is currently an Assistant Professor of Computing and Mathematical Sciences and Electrical Engineering at the California Institute of Technology. 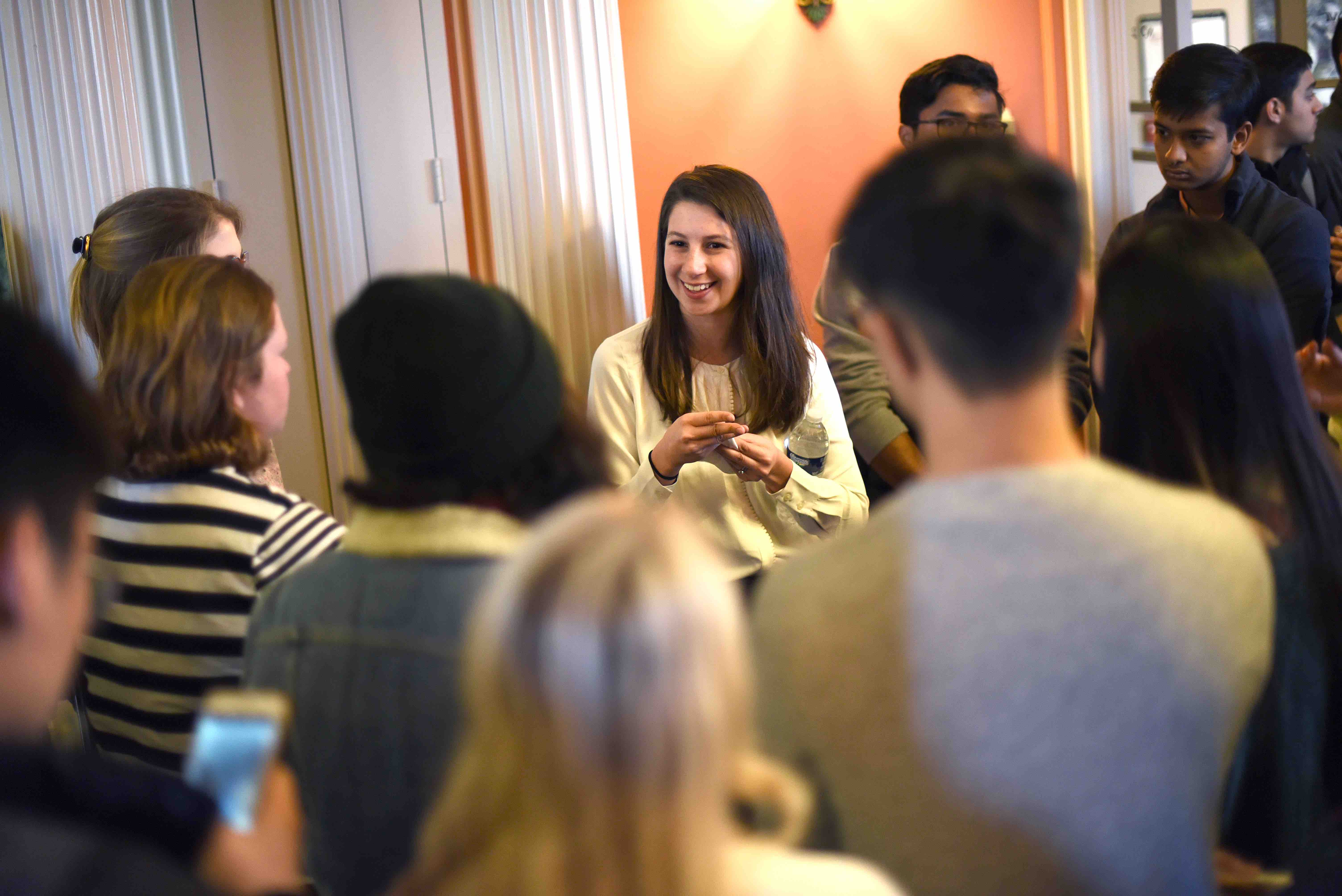 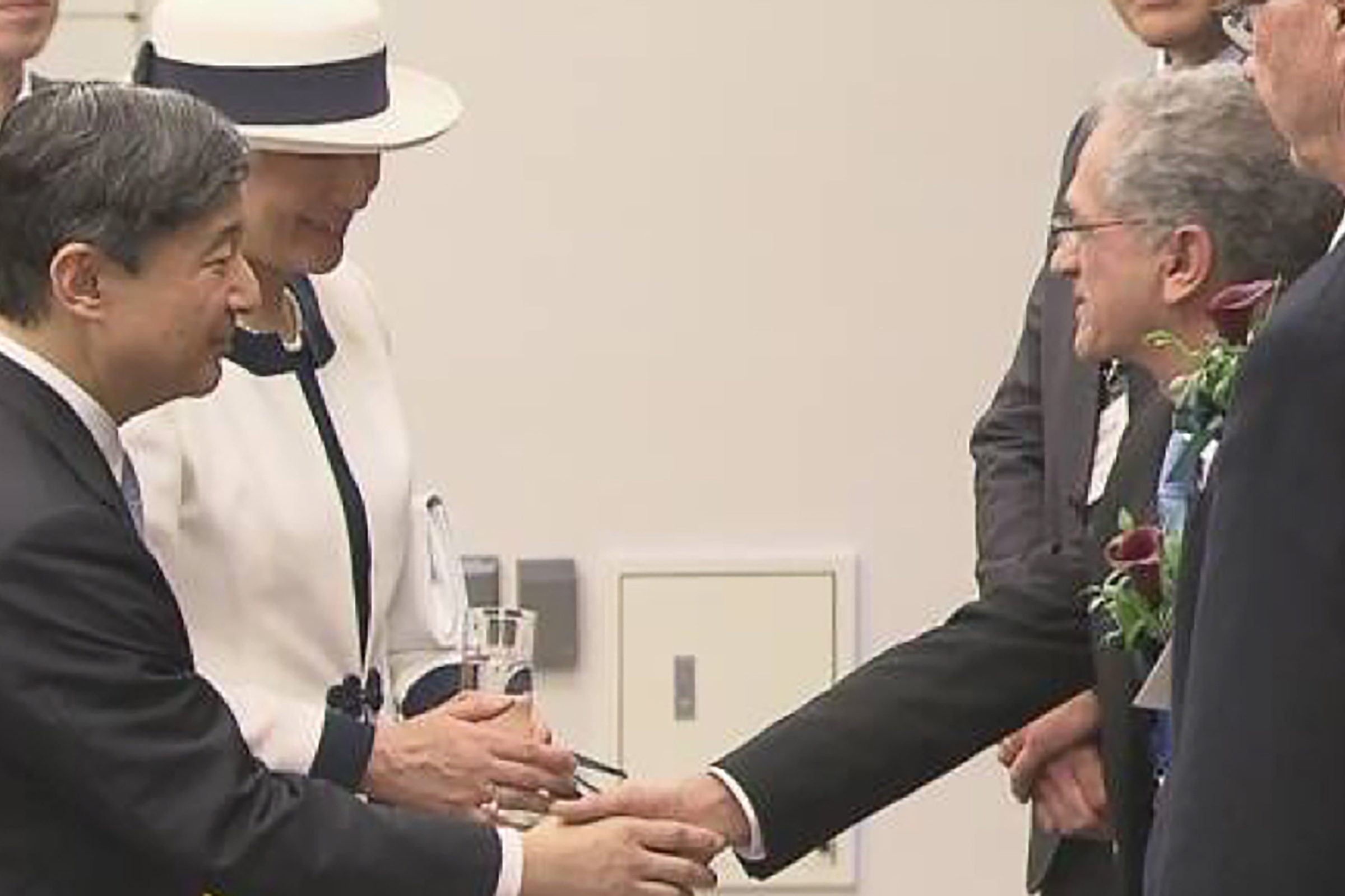