Inspired by a University of Michigan professor’s recovery after a cycling crash, an innovative patch could bring the assessment of human joints into the 21st century.

The patch uses electronic sensors to understand the functional range of motion as opposed to today’s static measurements. Influenced by kirigami, Japanese art of creating 3D structures from cut paper, the sensor can hug the curves of a joint and yet can be manufactured flat.

“The shoulder in particular moves in a very complex way. It’s one of the most well-articulated joints in the body,” said Max Shtein, a professor of materials science and engineering at the University of Michigan, who crashed his bike and collaborated with his students on the work.

“Nobody’s really been able to track it properly with anything wearable, and yet it’s key to so many activities in sports and daily life.”

After breaking his collarbone, Shtein was dismayed to find that his physical therapist assessed the range of motion in his shoulder with a basic protractor. The method is prone to large errors, and he had no way of repeating the measurements at home.

He realized that a wearable sensor could have recorded the full scope of his motion and tracked his exercises, but it is expensive to build electronics onto curved structures. This sensor would need to be manufactured flat but still be able to follow the contour of a patient’s shoulder. 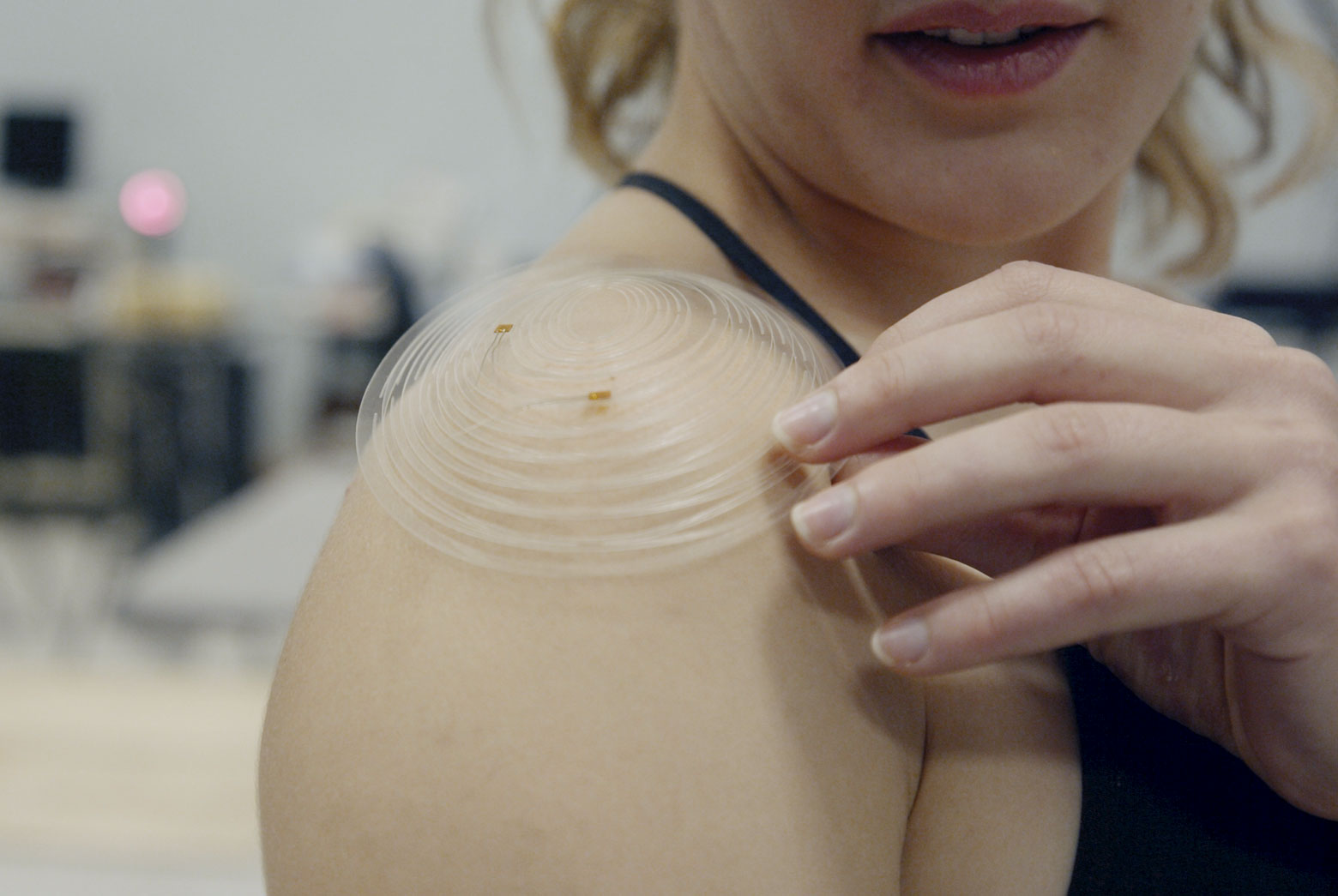 IMAGE:  Erin Evke demonstrates how the cut patterns in the kirigami sensor open so that it follows the curve of her shoulder. This enables the sensor to be manufactured flat, which is crucial to making the device affordable. Credit: Levi Hutmacher, Michigan Engineering

He and Erin Evke, a doctoral student in materials science and engineering, came up with a solution inspired by kirigami. She laser cut a thin sheet of plastic into a labyrinth of concentric ovals. The shape pulls apart almost like a Slinky, and the cuts open into a lacework over the shoulder.

“If you take a sheet of paper and try to wrap it around a sphere, it’s impossible to do so without folding or wrinkling the paper. This would significantly stress the sensors before your measurement even began,” Evke said. “Our cut pattern avoids this problem.”

Because these structures transform from a flat sheet to a wrinkle-free, 3D shape, they can be manufactured with existing, cost-effective technologies. Shtein estimates that the cost of individual sensors could be below $10, assuming mass production. That’s much less than the cost of a single physical therapy appointment. It could be an inexpensive way to improve patient outcomes.

As a proof-of-concept, the team equipped the kirigami patch with two strain gauges—one along the corner of the shoulder to capture the raising and lowering of the arm, and the other at the back of the shoulder to measure cross-body movements.

Collaborating with researchers working under Deanna Gates, an associate professor of movement science at U-M, Shtein’s team cross-referenced the data from the kirigami sensor with arm motions captured by a camera motion tracking system. The system uses reflective markers to track the angular positions of the arm and reconstructs them in a computer simulation. 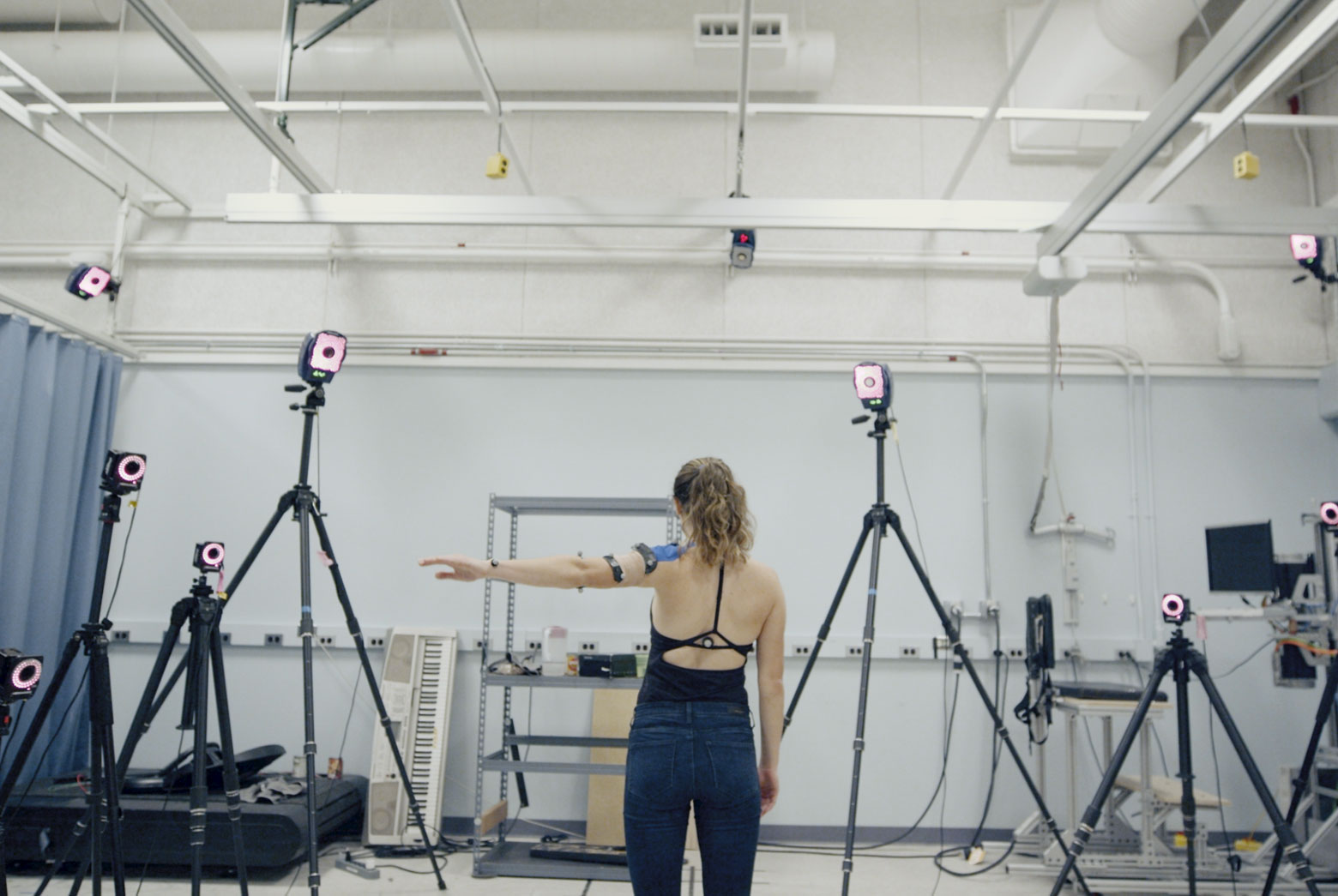 IMAGE:  The motion capture cameras and kirigami sensor pick up first author Erin Evke’s arm movements, enabling the team to match the reading from the sensor to the position of her shoulder. Credit: Levi Hutmacher, Michigan Engineering

The team envisions that this kind of inexpensive sensor could be given to physical therapy patients, enabling them to log exercises and see progress through a smartphone app. This could help keep patients honest about doing their exercises and also provide more detailed information to therapists about each patient’s progress.

Evke, who competed in college track and field, also considers how it could be used to help athletes improve their form.

“Since you can tune the cut design to match the curvatures of all different parts of your body, you can generate a lot of data that can be used to track your form—for instance while lifting—as well as the amount of strain applied on your joints,” she said. “The user could be alerted of improper form in real-time and therefore prevent injuries.”

Shtein pointed out that we don’t have good ways to measure joints and understand how to care for them. Recent work suggests that tears in the anterior cruciate ligament, a serious knee injury experienced by many athletes, occur as a result of cumulative stresses rather than a single excessive force. Similar issues occur with the shoulder joint. Inexpensive sensors could measure stresses so that athletes and trainers could recognize evolving problems and head off major injuries.

The paper is titled, “Developable rotationally symmetric kirigami-based structures as sensor platforms,” and is published in the journal Advanced Materials Technologies. The research was funded in part by the National Science Foundation. 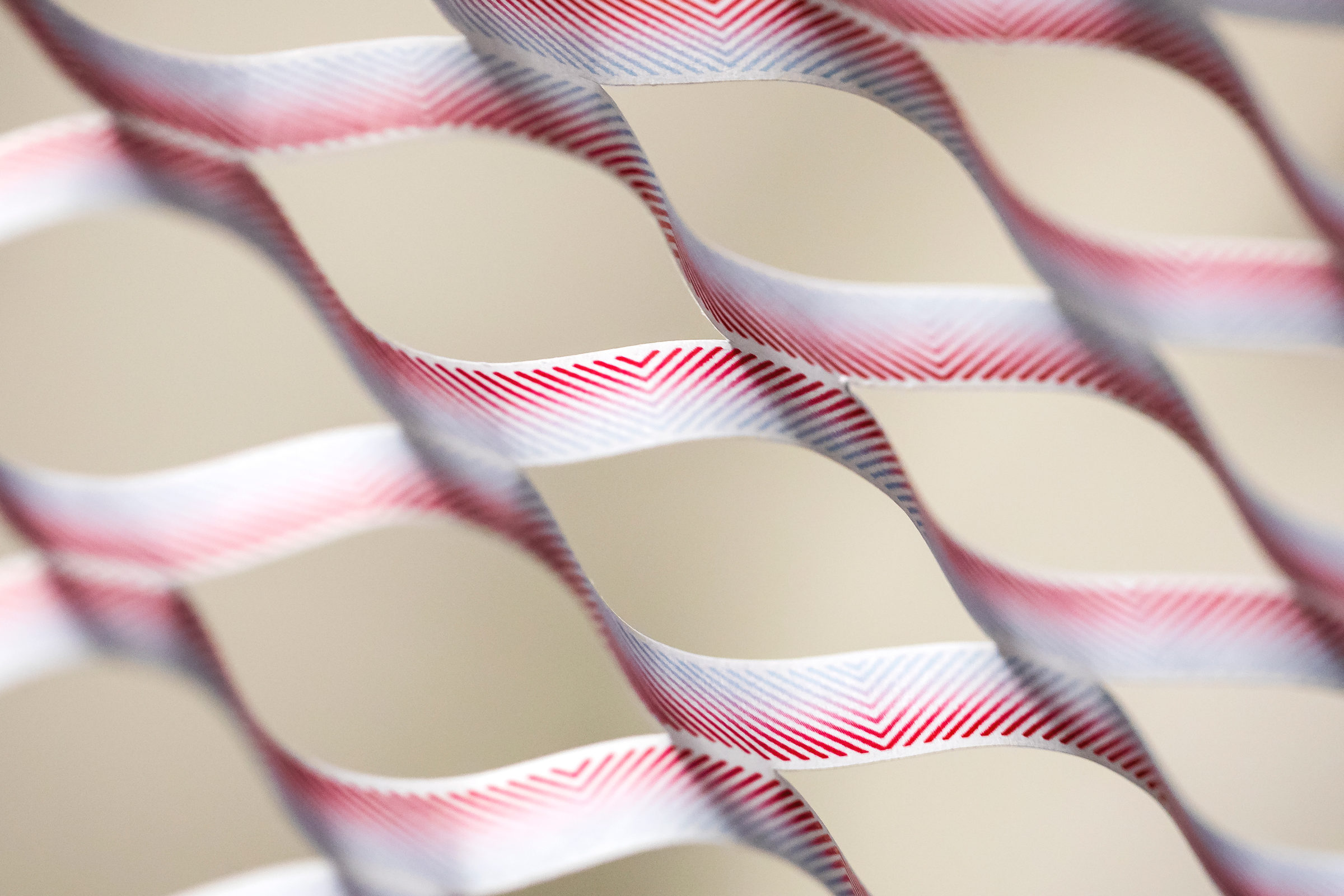 The rays used by airport scanners might have a future in medical imaging.| Medium Read 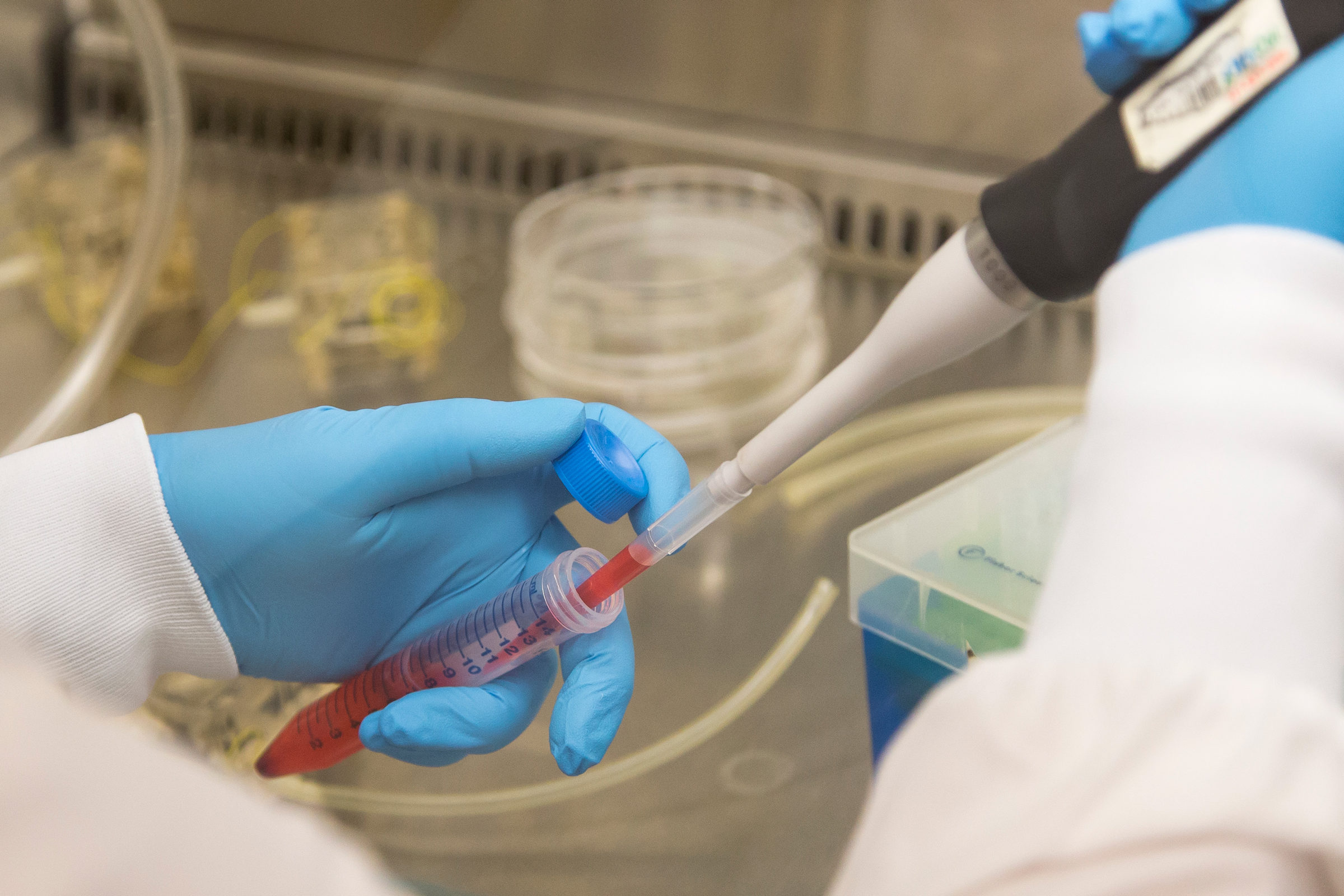 Cancer is smarter than you think: Q&A with Geeta Mehta

Decoding the sophisticated inner workings of cancer may help us fight it.| Medium Read
Researchers